We have always loved Hong Kong, so we landed at the International Airport on Lantau island with rising anticipation. Regrettably, we were going for only two days this time, so on the drive to Kowloon there was no time to visit the Big Buddha and the stilt village, or take the cable car, the longest in South East Asia, to the top of the island.

Our base was the Ritz-Carlton in Kowloon on the mainland, a wonderfully comfortable and efficient hotel with many outstanding features, not least Ozone on the top floor (the 118th), the highest bar in the world. 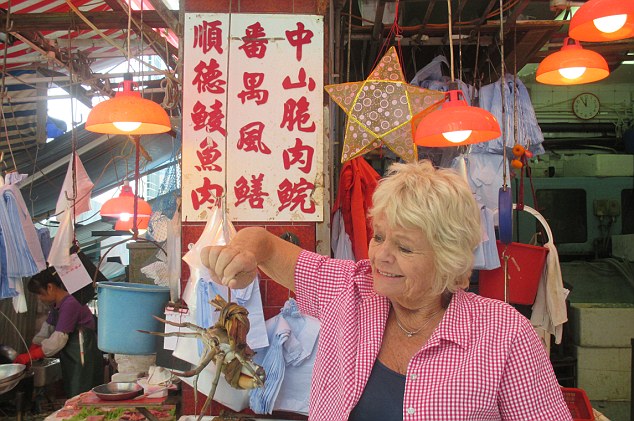 Feeling the pinch: Judith gets to grips with the local produce in a food market

We love crab so, after admiring the stunning lights of the harbour and Hong Kong island from Ozone, which perfectly reflects the stylish nightlife, we had the spiciest crab we have ever eaten at a popular restaurant in Causeway Bay called – wait for it – Under Bridge Spicy Crab!

The next day we went with our guide Rosanna to the Graham Street wet market, the oldest open-air market in Hong Kong. The range of produce from all over the world is staggering and the wealthy send their servants here to do their shopping for them because the quality is so high. It is well worth a visit, as is the Stanley market, where you can buy just about anything.

On the whole, the stallholders speak English, as the majority do on the island, the southernmost part of Hong Kong that has been under Chinese rule since 1997, so language is not a problem. 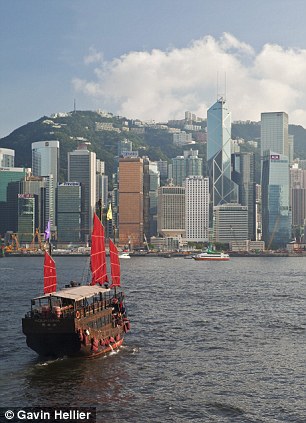 Then we went to hectic Causeway Bay again and the Hysan Place shopping mall, with its natural light, lush greenery, high ceilings and 120 outlets from fashion to lifestyle.

That evening we boarded the Aqua Luna, the last red-sailed wooden junk hand-built in Hong Kong, and revelled in the Symphony Of Lights out in Victoria harbour – the ‘world’s largest permanent light and sound show’, according to Guinness World Records.

Hong Kong is alive with street markets, bars and more than 11,000 restaurants serving a huge variety of local and international cuisine. On our last night we went to Loong Toh Yuen in the grand Hullett House hotel on Canton Road and enjoyed some classic Cantonese dishes, including dim sum and Peking Duck.

It is a stone’s throw from the famous Star Ferry which plies across the harbour between Hong Kong island and Kowloon on the mainland. At least one crossing is a must. There is also a tunnel linking the two for cars and buses.

Hong Kong has an altogether quieter side with its 23 national parks, eight walks which take in the culture and history, and 250 hiking trails – and by 2015 there will be 30 miles of cycling paths.

You should also take time out to visit Repulse Bay, the most spectacular bay in the region, and Deep Water, Middle and South Bays – all perfect for swimming and watching the sunset. No visit to Hong Kong is complete, so they say – and they are right – without taking the tram to Victoria Peak, the highest point on the island.

The tram is more than 100 years old, takes 200 passengers, runs from 7.30am to 11.30pm and, when you reach the Peak after passing the skyscrapers on the way up, you are 1,800ft above sea level. From here you look down on the whole of Hong Kong, Asia’s culinary capital where East meets West. A lasting image to take home with you.

Ching He Huang talks China travel, what to order and where you should go

The best accommodation in Whistler, from slope-side condos to luxury hotels

The best of the Miami nightlife scene, from samba shows to superclubs

Copper is ‘the new oil’ and low inventories could push it to $20,000 per ton, analysts say