The World Health Organization declared Latin America “a new epicentre” of the coronavirus pandemic as President Donald Trump ramped up pressure on state and local governments to speed up the reopening of the reeling American economy.

Surges in infections across much of Central and South America have driven the global case count to nearly 5.2 million, with more than 337,000 deaths, even as hard-hit Europe and the United States cautiously move into a recovery phase. 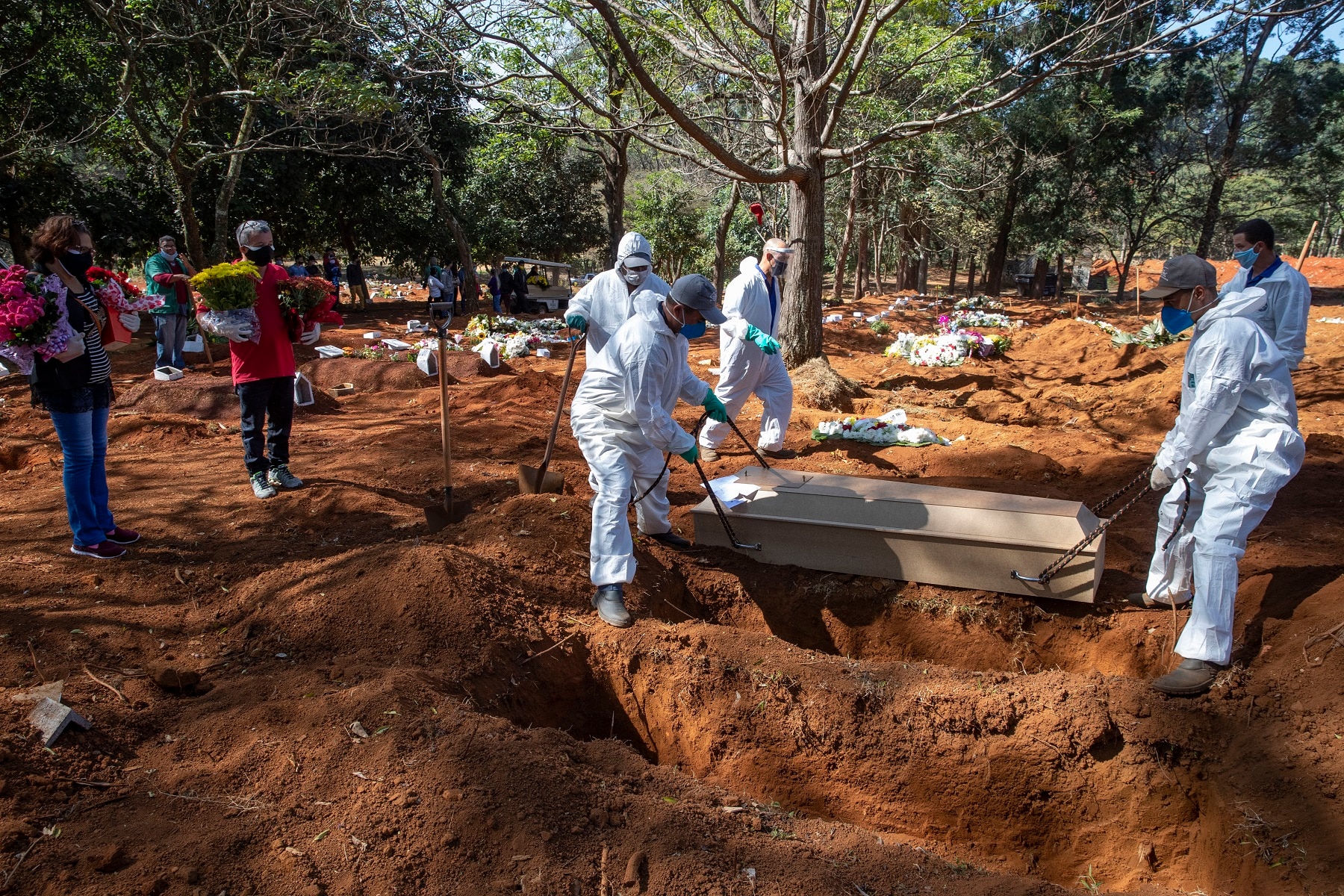 Cemetery workers in protective clothing bury the bodies of COVID-19 victims at the Vila Formosa cemetery in Sao Paulo, Brazil.

The death toll in Brazil has soared past 20,000, and with 310,000 reported cases, it has the third-biggest caseload in the world behind the United States and Russia.

“In a sense, South America has become a new epicentre for the disease,” WHO emergencies director Mike Ryan said on Friday.

“We’ve seen many South American countries with increasing numbers of cases… but certainly the most affected is Brazil at this point.”

Unlike in Europe and the United States, where the elderly were hardest-hit, a significant number of deaths in Brazil have been younger people, who are often driven by poverty to work despite the threat of infection.

“Since Brazil has a younger population, it’s normal for the number of cases to be higher among under-60s,” said Mauro Sanchez, an epidemiologist at the University of Brasilia.

“What’s perverse is that a lot of the people who are exposing themselves to the virus are doing it because they don’t have a choice.”

As the toll mounted, grave-diggers at a cemetery outside Sao Paulo scrambled to keep up.

“We’ve been working 12-hour days, burying them one after the other,” said one worker at Vila Formosa, wearing a white protective suit, mask and face shield.

In Washington, President Trump, keen to find a way out of the crisis and facing an uphill re-election battle, ramped up pressure on state and local governments to ease lockdown measures.

The pandemic has hammered the American economy and led to calls for an end to virus restrictions, despite the COVID-19 numbers still rising in the United States — the worst-hit country in the world with 1.6 million infections and 96,000 deaths.

Trump demanded state governors classify churches, synagogues and mosques as “essential services” on the same level as food and drug stores, and immediately allow them to hold services despite curbs on public gatherings.

“The governors need to do the right thing and allow these very important essential places of faith to open right now, for this weekend,” said the president, who counts religious conservatives as a core of his electoral base.

“If they don’t do it, I will override the governors. In America, we need more prayer, not less,” added Trump, who has previously expressed support for street protests against lockdowns. Two commuters wearing face masks as a precaution at the New York City subway amid the coronavirus pandemic.

It was not clear whether he had any authority to override the governors.

There was pushback from the mayor of Los Angeles after the Trump administration warned that the continued lockdown in the city could be illegal.

In the latest step to restart the economy, the Trump administration said Friday it would exempt from entry bans foreign professional athletes competing in the top leagues for several sports, including basketball, tennis and golf.

“In today’s environment, Americans need their sports,” Chad Wolf, acting secretary of the Homeland Security department, said in a statement announcing the order.

“It’s time to reopen the economy and it’s time we get our professional athletes back to work.”

‘Not possible to save them all’

Experts have warned that until a vaccine or treatment is developed for the virus, lockdown measures will persist in some form to prevent new waves of infections, a factor that has put immense pressure on economies.

The airline, travel and hospitality sectors have been hit particularly hard by the pandemic, and car rental giant Hertz became the latest high-profile victim, announcing Friday that it was filing for bankruptcy in the United States and Canada.

It added that the bankruptcy filing excludes its main international operations, including Europe, where many nations are opening up their economies cautiously after slowing the spread of the virus.

France decided that it was safe to hold a delayed second round of municipal elections on June 28, and the Czech Republic said the epidemic remains contained there, two weeks after shopping malls, cinemas and restaurant terraces reopened. A Hertz Car Rental is closed during he coronavirus pandemic on 6 May 2020 in Paramus, New Jersey.

Serbia said, meanwhile, that the Exit Festival in Novi Sad — one of Europe’s biggest music events — could go ahead in August as planned, and in Italy Florence’s famous Duomo cathedral reopened to the public.

But authorities are still keen to avoid opening up too fast, with a surge in Russia illustrating how quickly the deadly disease can spread.

Russia has so far recorded 3,249 deaths — with a caseload of more 325,000 infections, second only to the United States.

“The seriously ill are building up. Doctors try to save each one who lies there for two, three or more weeks,” said Moscow Mayor Sergei Sobyanin.

“Unfortunately, it’s not possible to save them all.

People in Australia must stay at least 1.5 metres away from others. Check your state’s restrictions on gathering limits. Testing for coronavirus is now widely available across Australia. If you are experiencing cold or flu symptoms, arrange a test by calling your doctor or contact the Coronavirus Health Information Hotline on 1800 020 080.

The federal government’s coronavirus tracing app COVIDSafe is available for download from your phone’s app store.

SBS is committed to informing Australia’s diverse communities about the latest COVID-19 developments. News and information is available in 63 languages at sbs.com.au/coronavirus.

People are blowing up, or just taking, ATMs in Philadelphia

Suspect Crashes One Vehicle After Police Pursuit, Carjacks Another

People are blowing up, or just taking, ATMs in Philadelphia

Suspect Crashes One Vehicle After Police Pursuit, Carjacks Another