Liverpool fans desperate to own a piece of the club’s history have splashed out over £870,000 on items ranging from office signs and sofas, to a photo of former boss Roy Hodgson in a huge Melwood memorabilia auction on Tuesday.

The auction, which smashed it’s estimated total value of £200,000, featured a wide variety of items from the club’s recently-closed training ground, including locker doors, a dartboard and Jurgen Klopp‘s heavy metal headphones.

The iconic champions wall, which used to be placed in the main reception at Melwood, went for the highest price, sold for a whopping £30,000 – despite a pre-bid estimate of between £7,500 and £15,000.

But it wasn’t just the eye-catching items which had people bidding in their droves, with even the most ordinary lots being snapped-up by devoted supporters, as the sale of 454 items in total raised £870,665 for COVID-19 relief and the LFC Foundation. 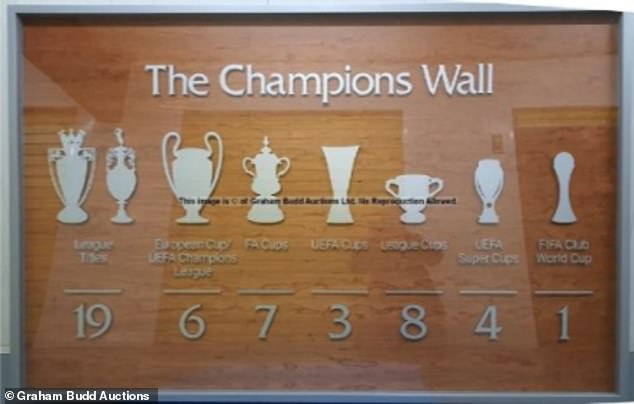 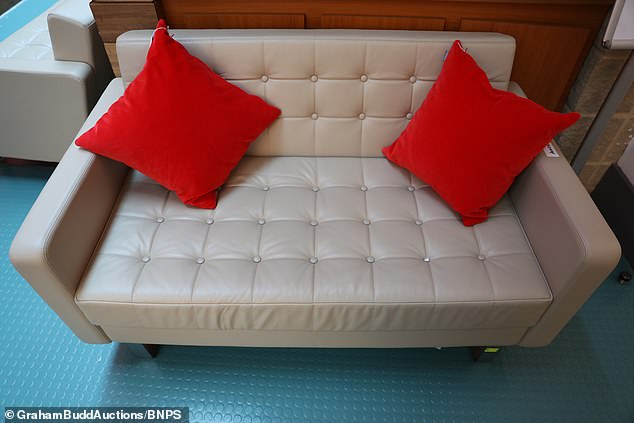 A sofa from Jurgen Klopp’s office was sold for £1,700 in a huge Melwood memorabilia auction 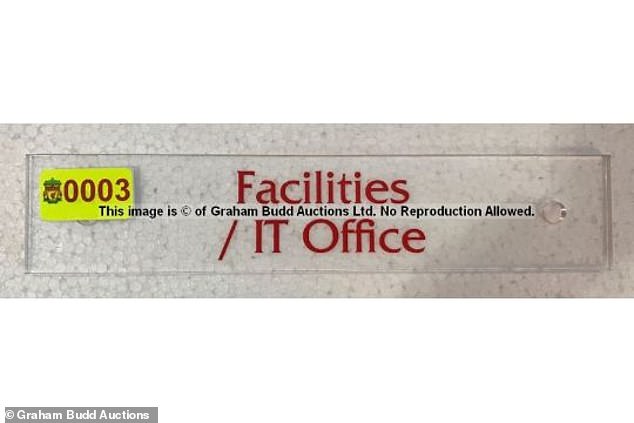 A sign reading ‘Facilities / IT Office’, which was estimated at between £80 and £120, was bought for a whopping £650, while another for the Human Resources department fetched £380 despite being valued at between £150 and £250.

One two-seater sofa from outside Klopp’s office was sold for an incredible £1,700 after plenty of interest, while another from inside went for £1,600 and a set of scales brought in another £340.

But perhaps the biggest indicator of the huge demand for items came when a photo of Roy Hodgson, the club’s former boss who was sacked after just six months following a disastrous spell in charge, went for £420.

A set of three green chairs were sold for £700, while two red chairs were bought for a far more reasonable £260.

And in a sign of the times, a hand sanitiser dispenser embossed with the Liverpool crest, was snapped up for £320 on Tuesday afternoon. 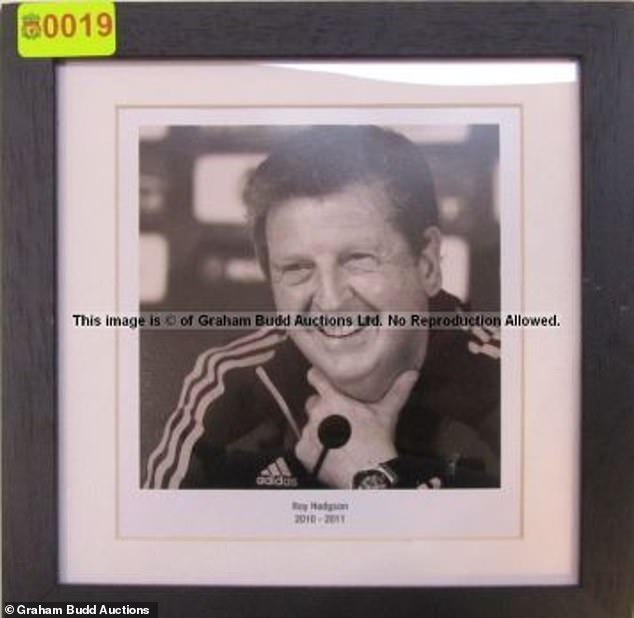 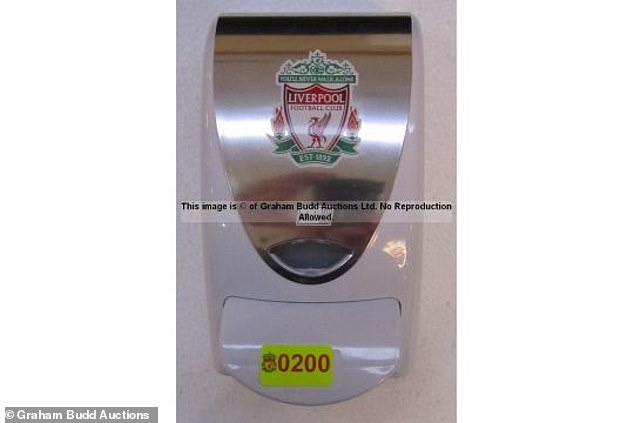 A hand sanitiser dispenser, perhaps installed to deal with Covid, was sold for £320 on Tuesday

Some proceeds from the auction will be going to the Liverpool Foundation and other club charities, and with some lots starting at just £30 it was hoped that there should be something for everyone who wants a memento from Melwood.

However, the trend of items selling way above their initial estimate continued throughout the auction on Tuesday afternoon.

The reigning Premier League champions left Melwood, their training base since the 1950s, in November to move to a new state-of-the-art £50million facility at Kirkby.

And now all manner of items have been auctioned off by sports memorabilia specialist Graham Budd.

The signature lot is undoubtedly the wooden Champions Wall, which was in the main reception at Melwood, which lists all the club’s honours down the years and is expected to fetch between £7,500 and £15,000. 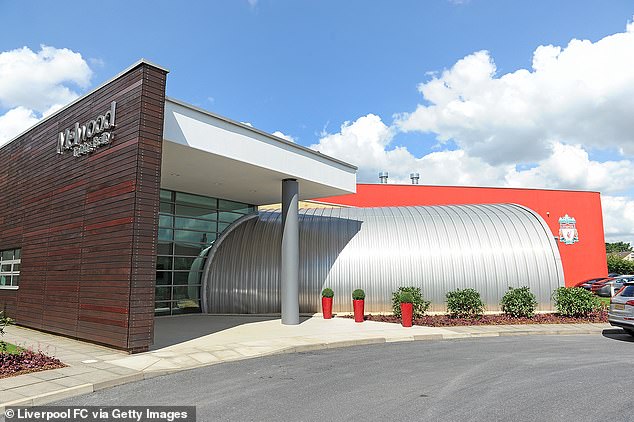 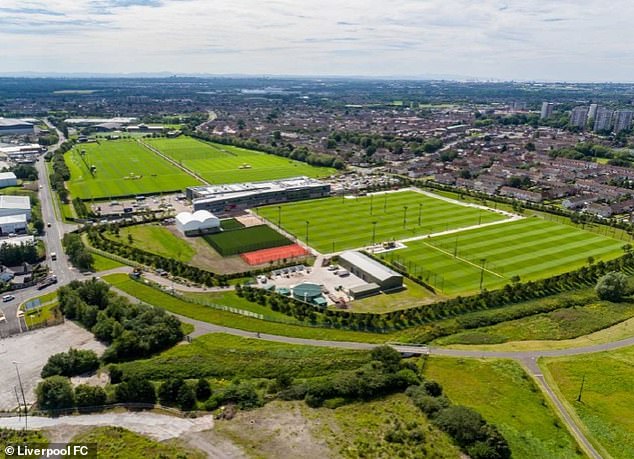 Speaking about the auction last month, auctioneer Budd told Sportsmail: ‘If you’re a Liverpool fan, this is the one for you.

‘They have now vacated Melwood and everything that wasn’t moved and wasn’t salvageable is all in this auction.

‘Some profits from the sale will be going to the Liverpool Foundation and their other charitable efforts, so it’s for a good cause as well.

‘I’d say the signature lot is the iconic Champions Wall, which has been added to over the years as they have won trophies. It’s such a recognisable piece of Liverpool imagery. 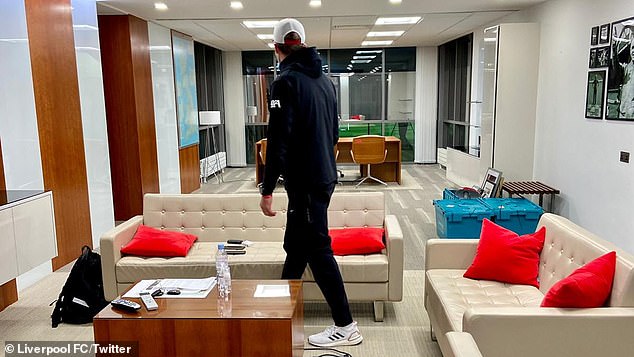 ‘The Welcome to Melwood sign, which greeted everyone who swung in through the gates, as well. But there is something here for everybody, a few lots will go for £100. We hope it’s quite inclusive to a lot of Liverpool fans.

‘We had an Anfield stadium auction in 2018 when the new stand was built with lots of memorabilia from the old stand. That was an eye-opener because the lots went to every part of the globe – the Far East, America, Australia.

TALK OF THE TOWN: Stella McCartney sends models to prowl the streets of London