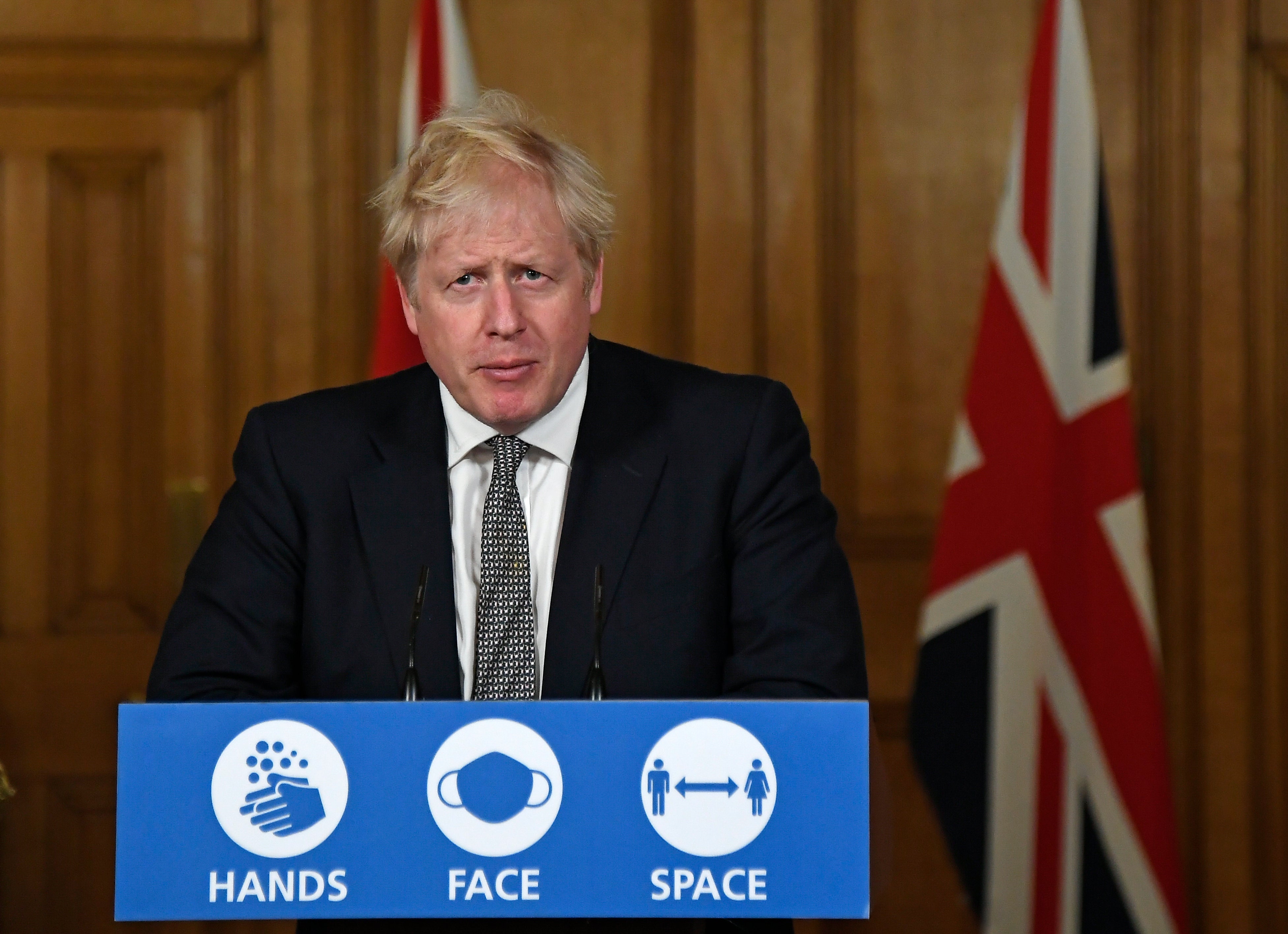 The Prime Minister  announced the new restrictions – which are set to last until December 2 – at a press conference from Downing Street on Saturday.

Pubs, bars and restaurants will close, though takeaways will be allowed, and all non-essential retail will be shut.

The measures will be similar to those introduced during the first wave of the pandemic in March, however, this time schools and universities are expected to remain open.

People will still be able to exercise outdoors, and travel to work if they cannot work from home, though restrictions on international travel are likely to be introduced.

MPs will vote on the new measures before they are introduced at 00.01 on Thursday, and when they lapse, the current tier system will be reintroduced.

Mr Johnson was flanked by Professor Chris Whitty and Sir Patrick Vallance for his Downing Street address, following a meeting of his Cabinet earlier in the afternoon.

The introduction of national restrictions marks a dramatic shift in Government policy, as the Prime Minister has until now resisted pressure to reintroduce nationwide restrictions.

More than one million lab-confirmed coronavirus cases recorded in UK

It comes after new data showed the extent of cases across England. The Office for National Statistics estimated that 568,100 people in households were infected with coronavirus in the week ending October 23.

Professor Sir Jeremy Farrar said the consequences of sticking with the current “insufficient” restrictions would be “much worse” than going for a second lockdown.

The director of the Wellcome Trust said: “The sooner we act, the sooner we can start to recover. It will be a very difficult few weeks now and no one can underestimate the toll that will take on people.

“But the consequences of sticking with the current insufficient restrictions would have been much worse.”

Sage member Professor Calum Semple told BBC Radio 4’s Today programme: “For the naysayers that don’t believe in a second wave, there is a second wave.

“And, unlike the first wave, where we had a national lockdown which protected huge swathes of society, this outbreak is now running riot across all age groups.”

Professor John Edmunds said the only way to have a “relatively safe” Christmas is to take “stringent” action now to bring the incidence of the virus “right down”.

It comes after a senior Government scientific adviser said it is “definitely too late to think that the two-week circuit-breaker on its own will sort this out”.

“It would bring it down a bit but it wouldn’t be enough to bring (the R value) right down. A two-week circuit-breaker would have an effect but now almost certainly it would need to go on for longer to have a significant effect.”

Ahead of Saturday’s announcement, Tory MP Steve Baker – a sceptic of lockdown restrictions – warned the public to listen “extremely carefully” to what the PM has to say.

Speaking outside No 10, Mr Baker told Sky News: “Today what I’ve had is the opportunity to take a team into Downing Street, there were three scientists, myself, a data analyst.

“We’ve had an amazing opportunity to robustly scrutinise the arguments, the data, the forecasts of where we’re going, and what I would say to people is the Prime Minister has a got very, very difficult choices to make.

Twisting my melon, man! The baggy, brilliant indie-rave summer of 1990