Youths aged 15 and 17 stabbed a talented 19-year-old footballer to death in the street with a Samurai sword and an 18-inch knife, a court has heard.

Francois Kablan, 19, died when he was attacked on Great Dover Street in Southwark on May 13 last year.

The footballer ran a short distance before collapsing and dying in the street, a judge at Isleworth Crown Court heard.

Mr Kablan, from Bermondsey, south London, played in the reserves for Harlow Town FC and scored a hat-trick on his last appearance for the club. 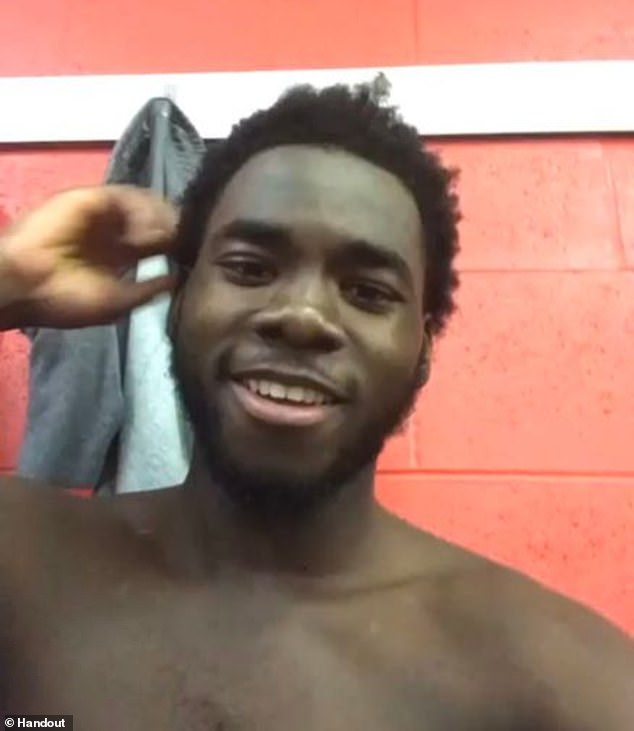 ‘It’s a case which involves knives on the streets of London it is a murder in which the life of one young man was lost in the course of a confrontation in May last year.’

Two teenagers have been accused of murder. Mr Little added: ‘That life was snuffed out in the blink of an eye by the joint actions of these two young men, the defendants that sit in the dock.

‘Whatever started it then led to a situation in which these two defendants, both armed with knives, did not back away or run. Instead they decided to engage, they were, we say, very much up for a fight.

‘These two defendants are good friends, they knew, we say, that each other was armed. They intended to assist each other to carry out the attack, that is why they are jointly liable for murder.

‘Both intended to cause really serious harm to the deceased.’

Mr Little told jurors CCTV revealed the defendants were both present in the area on the day of the killing.

‘As you have seen from the map both of their home addresses were some distance away. They had a close connection to a flat in Middleton House, for reasons which will become clear.’ 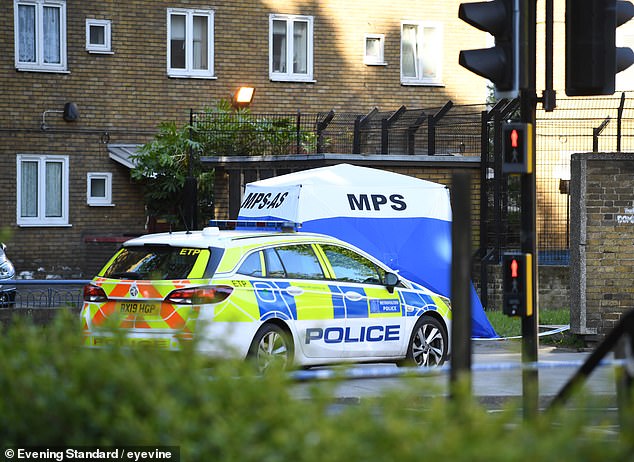 The victim, who played for Harlow Town reserves, was pronounced dead at the scene on a residential estate in Great Dover Street in Southwark on May 13 (pictured)

The pair were seen by a woman, who lives in the area and has done for many years.

‘She saw that defendant standing in a car park and she saw one of them kick a yellow cleaning sign over onto a knife on the floor.

‘A blade about 18 inches in length with a white handle. Another witness, her husband, noticed the other youth had a samurai sword tucked in his trousers. He had seen him with that knife before.

‘You will want to consider why a 15-year-old boy would want or need to have such a dangerous knife in his possession. It was covered by the yellow cleaning sign, which was right next to that motorbike.

‘The CCTV It shows that both the defendants were aware of that knife.’

He claimed there was ‘no doubt both the defendants are aware of that knife’, adding: ‘Both defendants are making sure it is obtainable from either side of the fence should something happen later.

‘Those that use knives you’d think might be aware there is a risk of being stopped by the police, accordingly it makes sense to have places they are kept should you need them.

‘It also makes sense not to have the knife secreted down your waistband throughout the entirety of the day.’

The youths denied murder and are being held in custody.

Speaking after Mr Kablan’s death Harlow Town Reserves coach Adam Connolly said: ‘Francois was a wonderful person and player. A lot of our players went to the same college as Francois, so it’s been hard on everyone within the squad to hear of this tragic news.

‘On his last game for Harlow, he scored a superb hat-trick to win us the game and walk away with the match ball. He was certainly a talented footballer and one who could have gone on to feature for the first team.

‘On behalf of all of the squad, and everyone at the club, our thoughts are with his family and friends.’

Countryside house from 1600s that comes with its own RIVER up for sale for £1.95million