Fashion fans unable to holiday amid the Covid-19 pandemic were taken on an adventure by Louis Vuitton yesterday as the label showcased a travel inspired runway collection.

Virgil Abloh, artistic director of Louis Vuitton’s menswear, looked to the theme of displacement for his AW21 collection, having been inspired by James Baldwin’s novel Stranger in the Village, which is about a black man finding his way in a remote Swiss village.

Male models strutted the runway in lavish over-the-top garments, including two men who walked in puffer jackets adorned with 3D renderings of landmarks in Paris and New York.

Other models in the fashion show carried silver travel cases and accessorised with huge oversized airplane bags, in a nod to the travel experiences many have missed during the global coronavirus crisis. 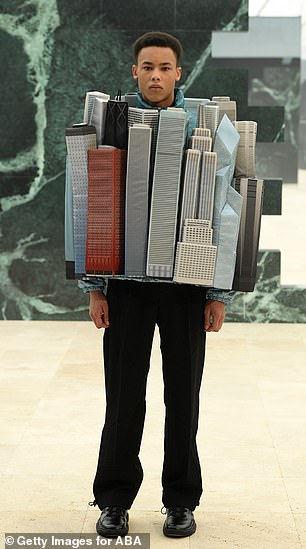 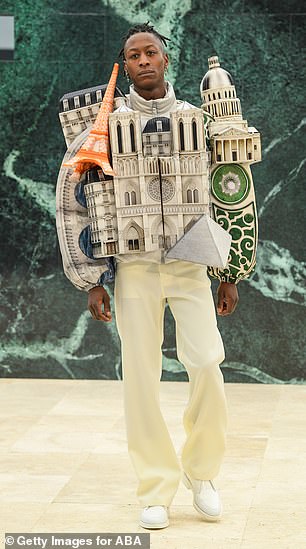 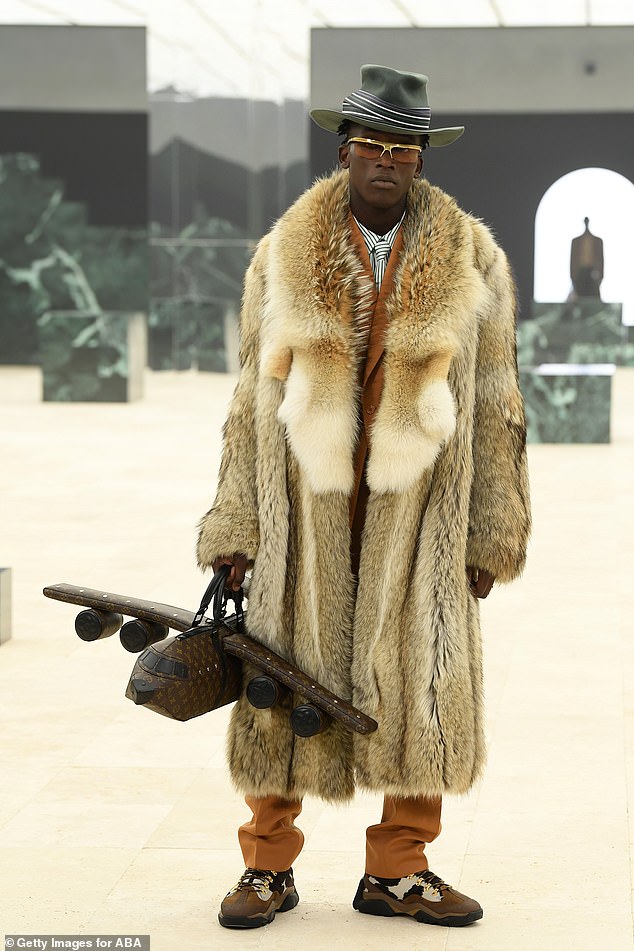 Models walked the runway, which was broadcast virtually, in oversized fur coats, with one carrying a huge airplane accessory 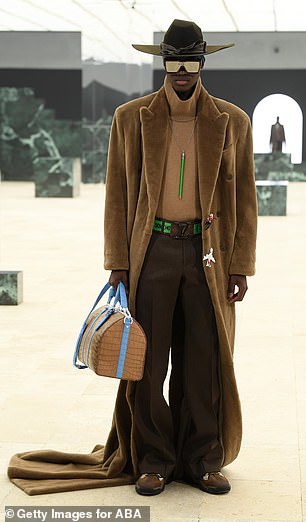 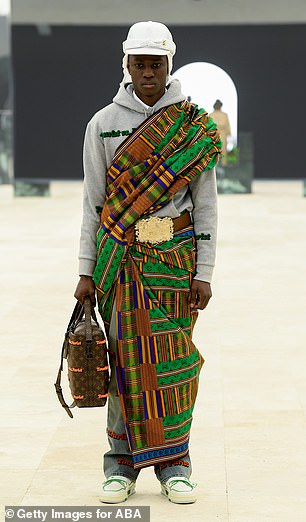 The show, which was broadcast digitally, saw models walking across a white stone runway in oversized coats and huge hats in soft browns and vibrant greens and blues.

Many carried travel bags in the classic Louis Vuitton brown print, while others sported silver airplane brooches during the show.

In one wow moment during the online show, two models wore 3D structures across puffa jackets, with one depicting the landmarks of Paris and the other of the New York skyline.

There were further nods to pandemic living, including a collection of coats designed to appear like plush dressing gowns. 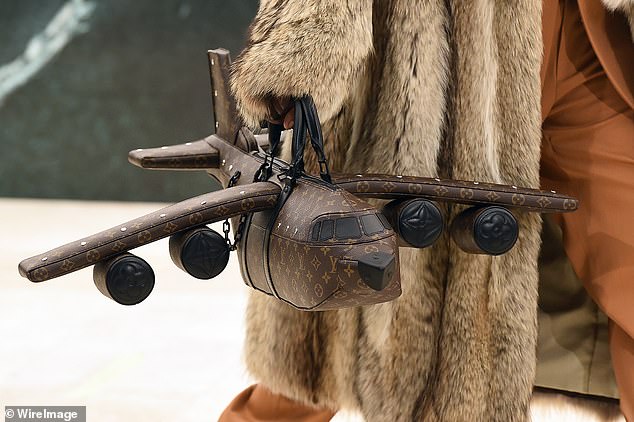 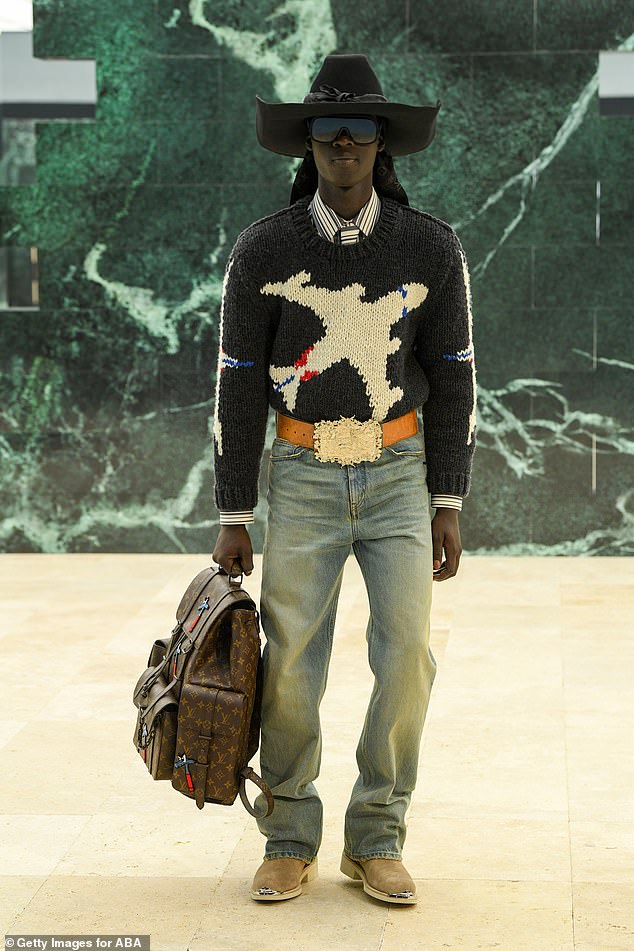 Virgil Abloh looked to the theme of displacement for his AW21 collection, having been inspired by James Baldwin’s novel Stranger in the Village

Other models were dressed like caricatures of businessmen as they donned slick suits and sharp coats while carrying cofee and newspapers.

Abloah, who is the first African American man to helm a Parisian luxury house, gave a nod to his Ghanaian heritage by including African Kente cloth in the collection.

With many labels decidedly moving toward a more environmentally-friendly approach, some of the fabrics within the collection had been upcycled.

Abloah has announced as the artistic director for Louis Vuitton menswear in 2018.

There were also nods to pandemic living, with several models wearing large oversized coats which appeared almost like dressing gowns 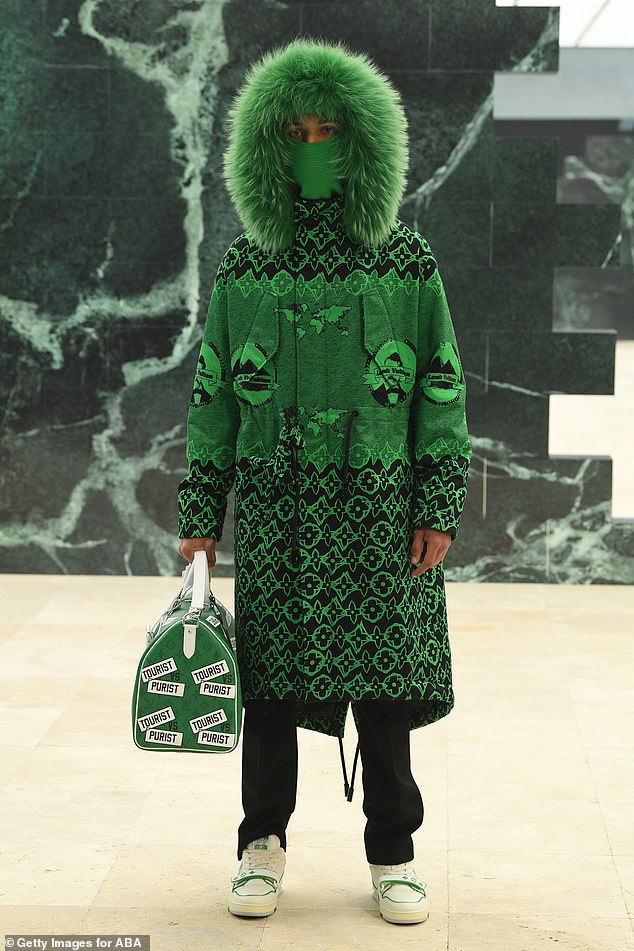 A glimpse at post-pandemic travel life? Dressed in an all green ensemble, another model wore a vibrant face covering

At the time, the news has been met with widespread praise online, with stars including Kim Kardashian-West and Edward Enninful OBE celebrating his appointment.

According to Management + Artists, British Vogue editor Enninful said: ‘Virgil is one of the few designers who truly marries street culture with high fashion – and the first black designer to be given such a position in the gilded halls of LVMH.

‘His appointment is a step in the right direction for diversity, as well as a particularly exciting creative moment for the industry. 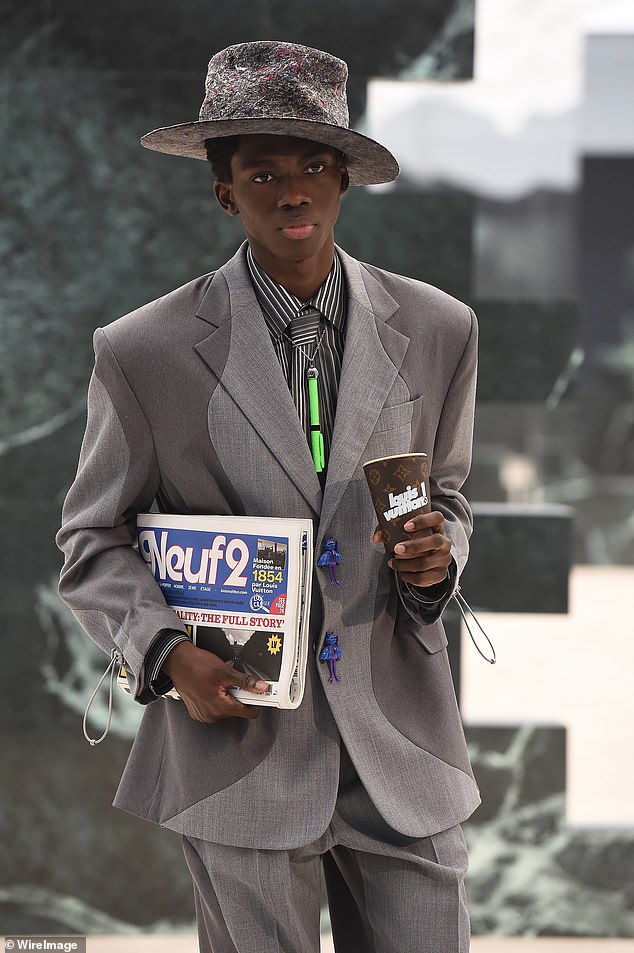 Born in Rockford, Illinois in 1980, he studied Civil Engineering and Architecture at university before moving into fashion.

He interned at Fendi with long-term collaborator Kanye West – earning a reported $500 (£352) a month – and despite having no formal fashion education he launched his own label, off-White, in 2012.

Since then he has showcased his designs at Paris Fashion Week since 2015, being named as International Designer of the Year at the GQ Men of the Year Awards in 2017.

The top four kitchen tricks of the year revealed

Your Garden Made Perfect couple divide opinion with their £25,000 design