A 24-year-old makeup artist from Melbourne has revealed how she got toned legs and a ‘thigh gap’ in six months after she lost 40 kilograms and sculpted her dream body.

Selin Cicek posted on TikTok to reveal how she finally got the legs she always wanted, and said she credits a combination of ankle weights, the Stair Master and running on the treadmill.

‘I get so many questions about the benefits of wearing ankle weights and here’s why I wear them,’ Selin wrote. 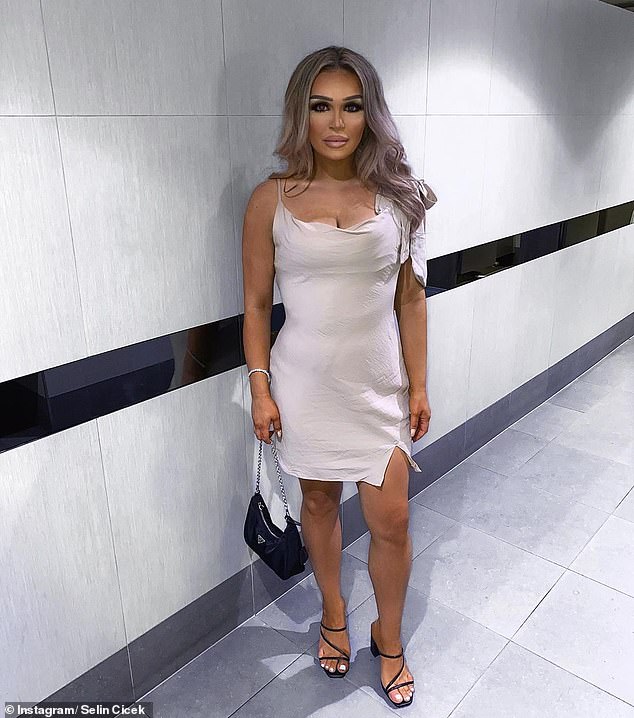 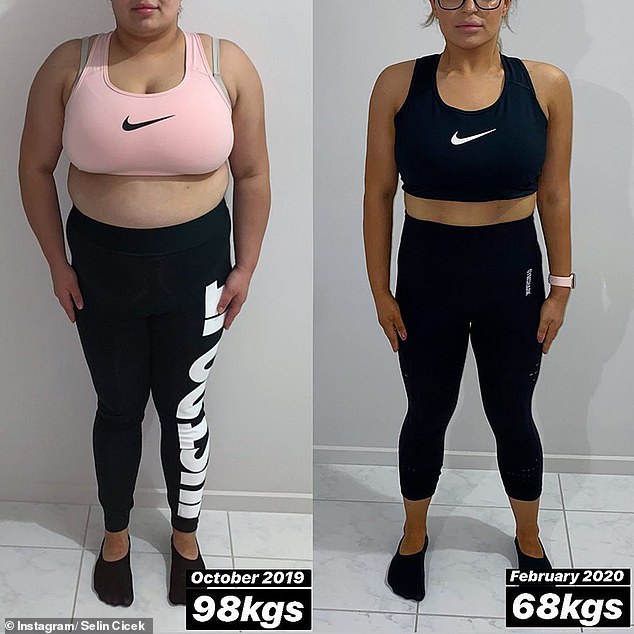 Selin (pictured before and after) revealed how she finally got the legs she always wanted, and said she credits a combination of ankle weights, the Stair Master and running 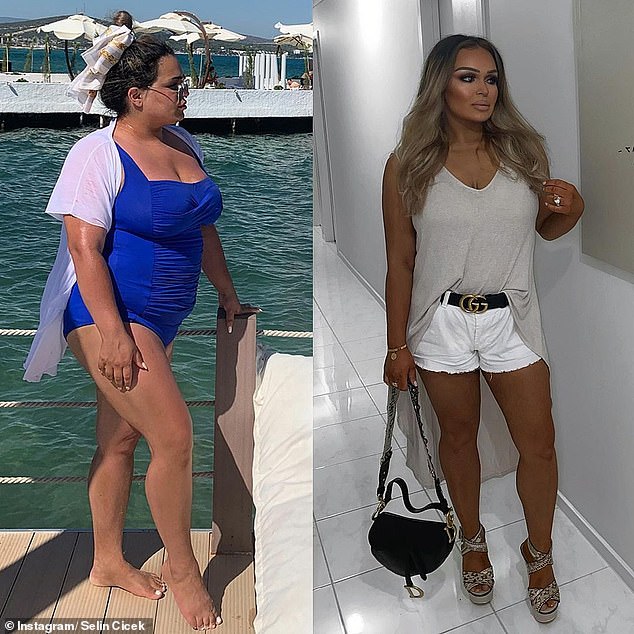 Alongside daily ankle weights, Selin (pictured before and after) said she loves doing HIIT training on the treadmill

‘They help tone your overall body when you’re doing training and boost endurance while adding resistance to your training,’ she said.

Selin added: ‘They also improve ab muscles and strengthen your legs at the same time.’

Alongside daily ankle weights, Selin went on the Stair Master for 20 minutes, ran on the treadmill for 20 minutes and did box jumps.

‘Repeat this for 20 minutes and this is the best way to burn calories.’ 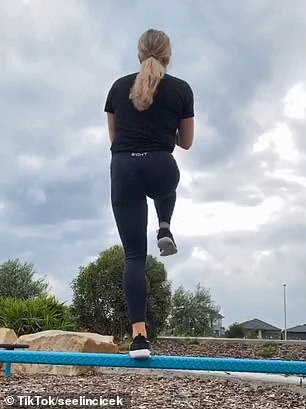 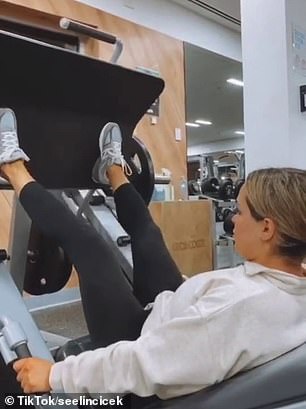 Selin also did step ups (left) and leg presses at the gym (right), coupling her approach with a high protein diet

What are Selin’s tips for weight loss and toning your legs? 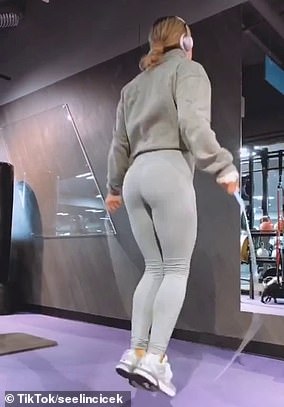 * Run on the treadmill doing one minute on speed 10 and then bring it down to 6.5 in speed and go for one minute. Repeat for 20 minutes.

* Do skipping, box jumps, step ups and leg presses at the gym.

* Go to the gym four times a week, but ideally six weeks. 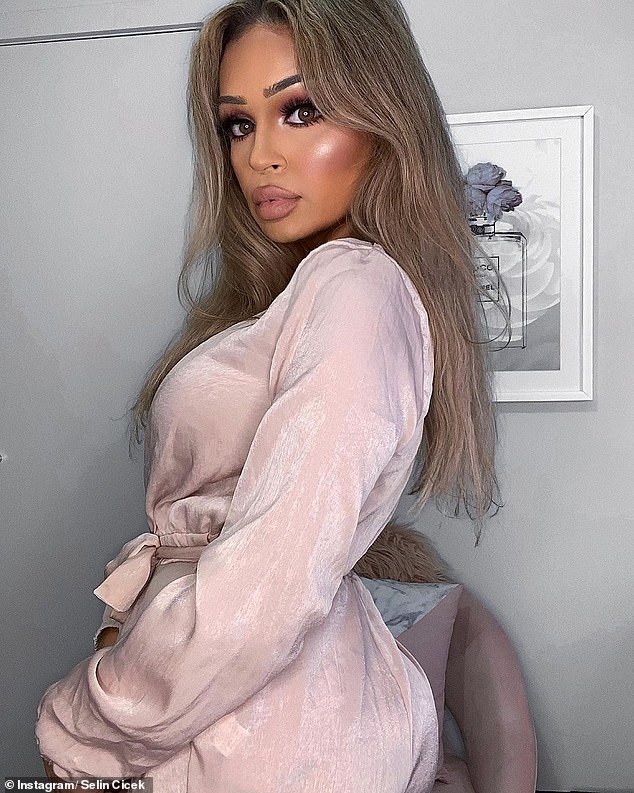 Selin (pictured now) said before she never worked out and ate what she wanted, but after a life-changing holiday to Turkey, she realised things needed to change

When she had time, Selin also said she did some skipping, box jumps, step ups and leg presses at the gym.

She said she went to the gym at least four times a week, but ideally six times.

The 24-year-old coupled this approach with a high protein diet. 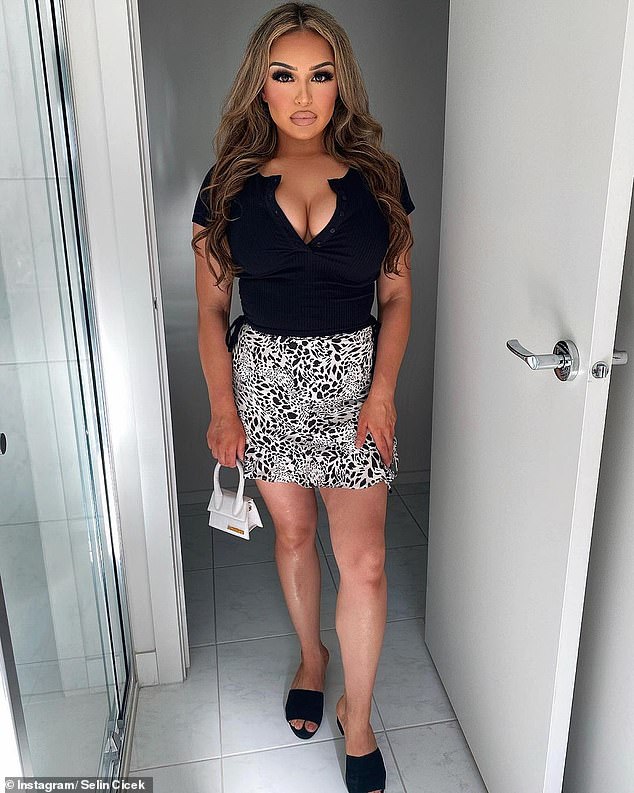 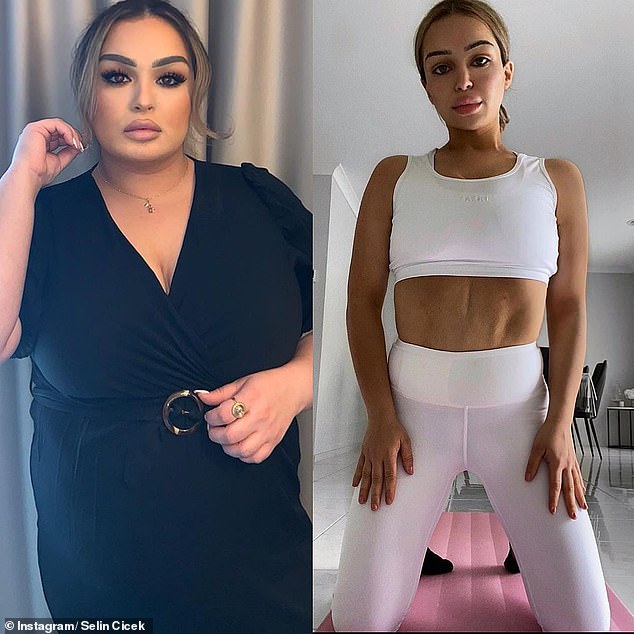 ‘I was so insecure of my body – all the other girls were so fit and I stood out as the overweight girl,’ Selin said (pictured before and after)

Speaking previously to FEMAIL, Selin revealed how she lost 40kg in six months:

What is Selin’s day on a plate?

9-10am: Two tablespoons of apple cider vinegar mixed with warm lemon water in the morning to help detox and assist in weight loss.

12pm: Protein shake with a scoop of protein, half a banana, 1.5 scoops of natural oats, touch of organic honey and cinnamon.

2-3pm: After a workout, I like to have any type of salad for lunch, such as a chicken quinoa salad with avocado and feta.

5pm: Pre-dinner snack such as carrot and cucumber slices with natural crackers and hummus.

7pm: Vegetarian dinner meals in the evening with a lot of greens, vegetables, lentils, mushroom and spinach or salmon with asparagus.

8pm: A small portion of fruit with natural Chobani yogurt and finish off the day with a green tea.

‘I never worked out, I ate whatever I wanted and it really took a toll on my body; I had gained so much weight in my early twenties,’ Selin said, adding she was originally a size 16.

But it wasn’t until a life changing holiday to Turkey that Selin realised she needed to make a change ‘before it was too late’.

When travelling overseas Selin said she ‘never felt so uncomfortable’ in her own skin and compared herself to other girls with slimmer figures.

‘I was so insecure of my body – all the other girls were so fit and I stood out as the overweight girl,’ Selin said.

‘I couldn’t shop for clothes either because there was so such thing as plus size.’

After returning home to Australia, Selin said she was overly ’embarrassed, shocked and upset’ with herself.

Taking steps towards dropping the weight, Selin not only changed her entire diet and eating habits, but she joined a gym and started working out six days a week.

She cut out bad sugars, artificial juices, soft drinks and takeaway food from her diet and used intermittent fasting as a tool to lose weight by only eating between the hours of 12 to 8pm.

‘I haven’t had surgery [and] don’t take weight loss pills – I cut out dairy and went on a high protein, low carb diet,’ she said.

The gym training consisted of high-intensity workouts and a mixture of both weights and cardio training.

By March 2020 after six months of hard work and dedication, Selin weighed 58 kilograms and fit into size eight clothes.

‘You have to train your body to adjust to a new lifestyle,’ she said.

‘You get cravings and you want to have sugar, but you have to push your body to overcome it and think about how empowered and amazing you will look after your journey.’

To find out more about Selin Cicek, please visit her Instagram page here. You can also follow her on TikTok here.

COVID In Illinois: How Is Dining In A Fully Enclosed Tent Different From Indoor Dining? State Officials Say It’s Not At All