A butcher who was severely burnt, losing one hand and badly damaging another after a horror motorbike crash is raising money for a double hand transplant.

Dorin Valentin from Croydon, London, was engulfed in flames after his bike came off the road in June 2020 and covered him in fuel.

The 25-year-old survived, but was left with burns over 60 per cent of his body as well as several broken bones.

After spending three weeks in a coma, medics at Chelsea and Westminster Hospital were forced to amputate one of his hands in a bid to save his life.

But they also had to remove the fingers and thumb from his right hand, which he only discovered after coming out of the coma once he was stable.

He is now fundraising for living expenses and treatment and is talking with his doctor about being placed on the transplant list soon so that he can regain what he has lost in the tragic accident. 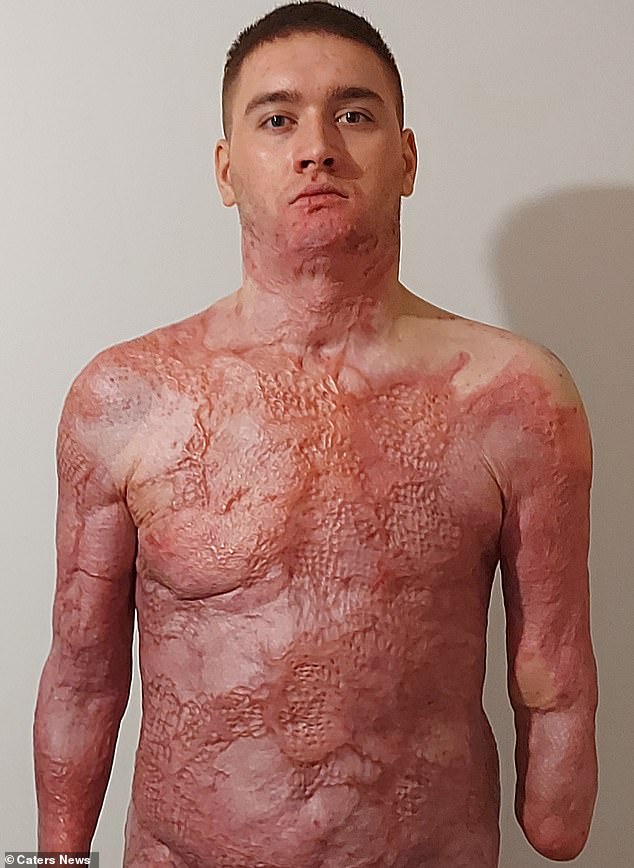 Dorin Valentin, 25, suffered burns over 60 per cent of his body and lost one of his hands after a motorcycle crash last year which saw him engulfed in flames after he was drenched in petrol 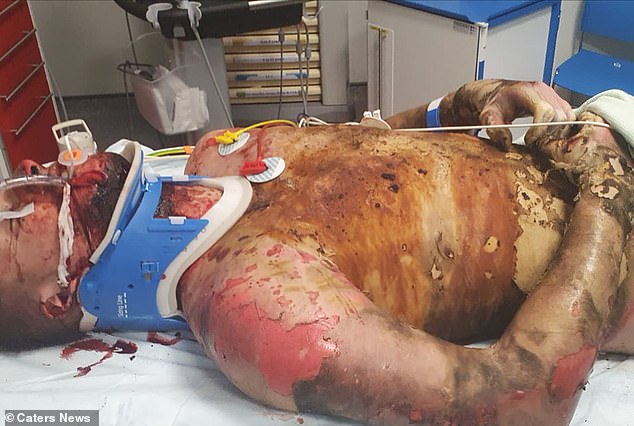 Dorin was rushed to hospital before being airlifted to a specialist burns unit who put him in a coma so his condition could be stabilised. After three weeks, they amputated his left hand

Dorin, who was born in Romania, said: ‘I don’t remember any of it, but I found out after that I was covered in fire and screaming for help.

‘I had only just passed my CBT to drive my new motorbike a week before this had happened, and one day when returning home from work I crashed.

‘Petrol covered my body and I went up in flames. Some guys came over to help me and I was very quickly taken to hospital for treatment.

‘They didn’t know what to do because I was so burnt so they airlifted me to a different hospital to see a specialist, but nobody could confirm to my family that I would live.

‘My shoulder and jaw were broken, I was in pain all over my body and I had no idea what was going to happen to me.

‘Once I was properly awake and stable, I looked down and noticed one of my hands was gone, it was an enormous shock.

‘My family explained that doctors had to amputate both of my hands while I was in a coma to save my life.

‘Once the dust had settled and I was in a good state to talk and move, I was discharged, and since then I’ve been trying to rebuild myself. 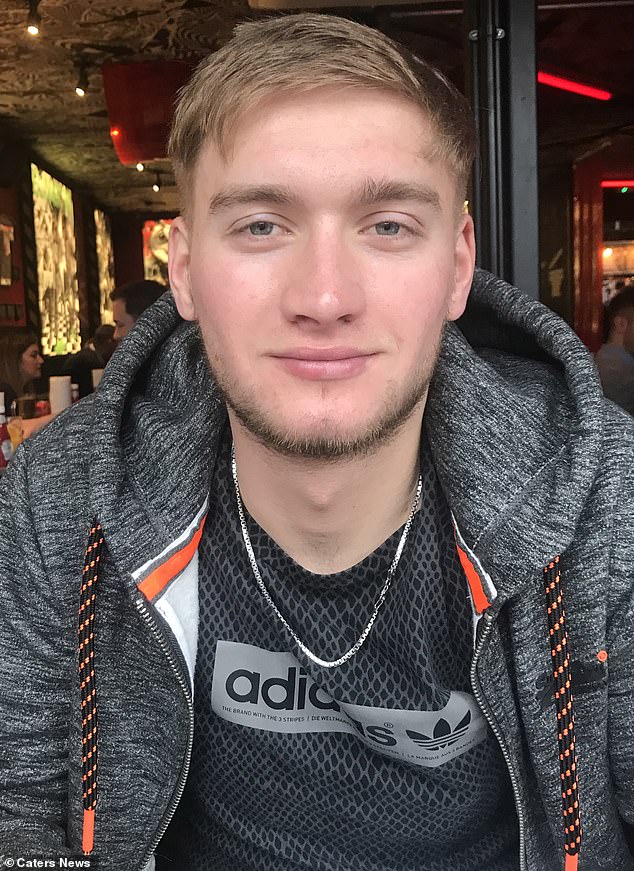 Dorin, pictured before the crash, said medics told  family they were unsure he would survive 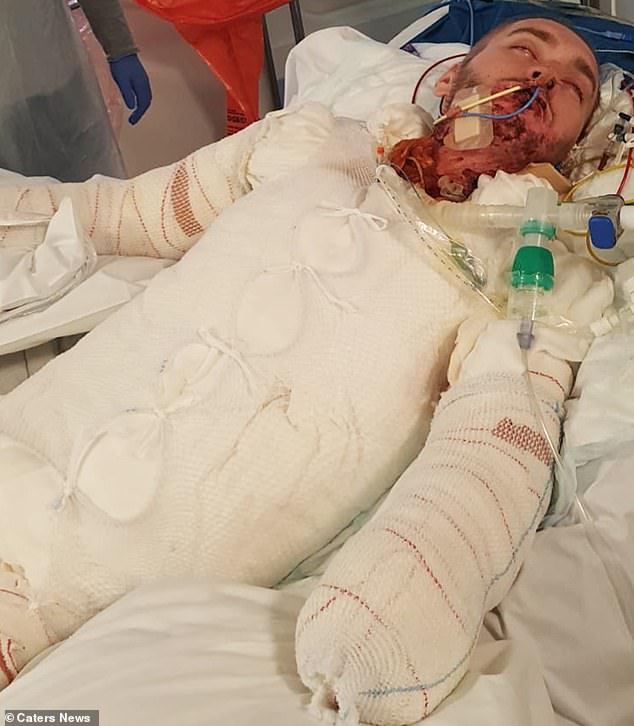 As well as burns over 60 per cent of his body, Dorin also suffered a broken jaw and shoulder

‘When I look in the mirror I don’t recognise myself anymore, and waking up every day without my hands is something I’m trying to come to terms with.

‘Luckily, I have an amazing support network and they have really looked after me, but without them I don’t know where I would be.

‘I’m now trying to raise the money to get a double hand transplant. The scars all over my body will always be there but I know there is hope to get my hands back.

‘I am a butcher so I need my hands to work, I realise everyone is having a difficult time at the moment but If there is any help out there then I’m appealing for it to try and save some of the life I have lost.

‘I’m currently speaking with my doctor about whether or not I’ll be put on the transplant list for a double hand transplant.

Having only passed his driving test a week and a half before his accident, Dorin was relishing the freedom of having his own vehicle to get around.

He said: ‘I was so excited to get it and I loved going on my bike, it just gave me a sense of freedom knowing I could get to and from work easily.

‘The night I crashed I didn’t see a car coming my way and I hit it, my life has been changed ever since that moment.’ 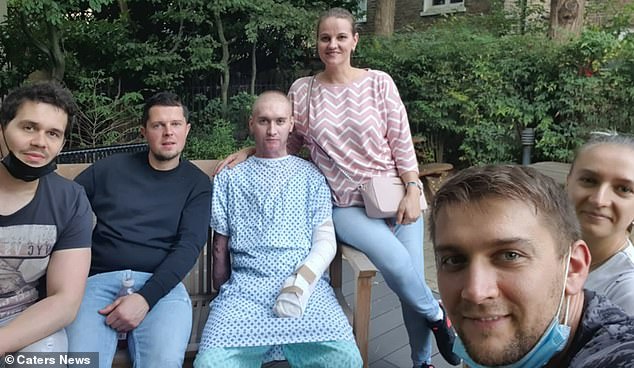 ‘I woke up and my brother was next to me explaining what had happened. I thought it was a practical joke and I was so bandaged up I couldn’t see the damage myself.

‘When I learnt what had happened to me, I realised how serious it was.’

Refusing to let his accident control his future, Dorin has started to adapt to his new body and hopes one day to have his hands replaced.

Dorin, said: ‘It’s been a really tough time, in an even tougher year for everyone. I don’t want to take what I have for granted and I’m so thankful that I’m still here today with my amazing partner and family.

‘But that’s not to say that I’m sat here sad about it, there is no use looking into the past, I just want to make the very best of my future.’

You can donate to Dorin’s fundraiser by clicking here

Economists see first signs in data that vaccine is working