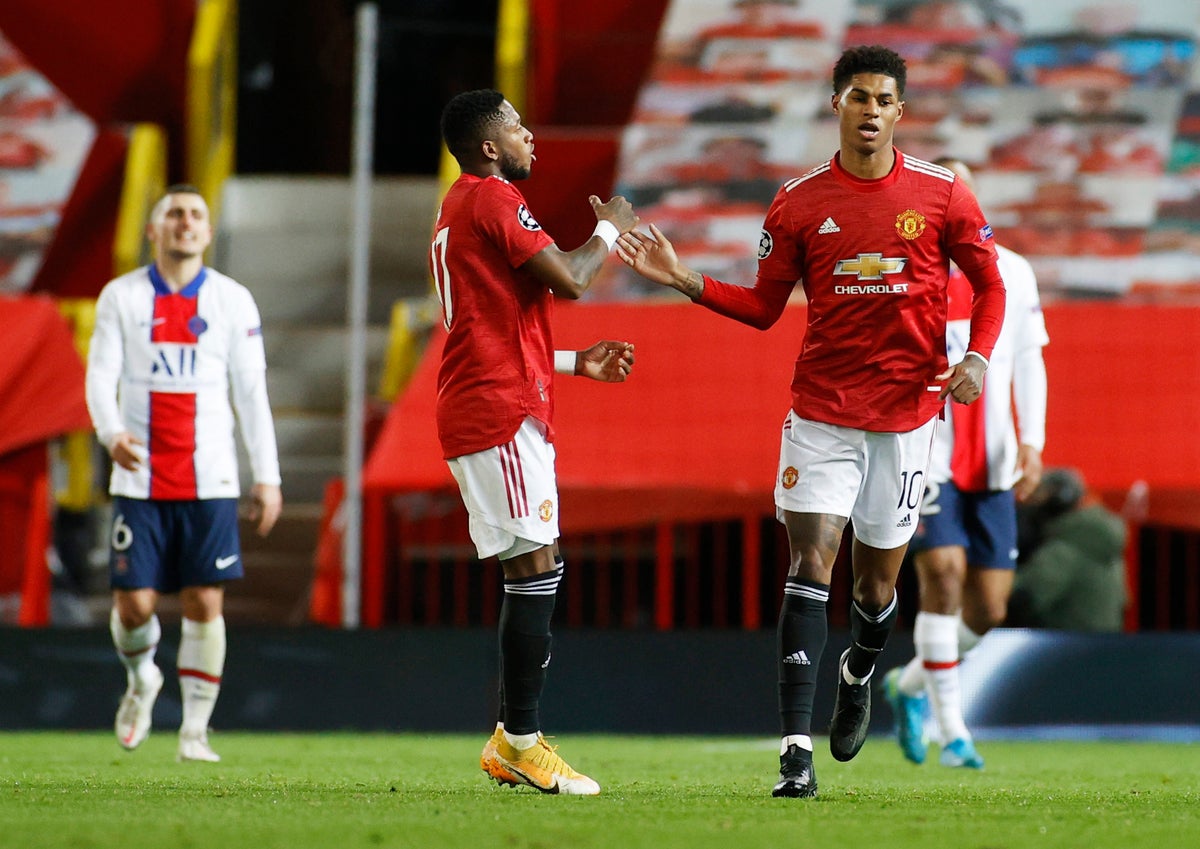 Ole Gunnar Solskjaer’s side then thrashed RB Leipzig 5-0 to leave themselves odds-on to reach the last 16, but only picked up three points from their double-header against Istanbul Basaksehir after losing in Turkey.

The first half offered plenty of drama as Neymar opened the scoring early on before Fred somehow escaped a red card for an apparent headbutt – and Marcus Rashford equalised to send United into half-time level at 1-1.

However, the game turned for United after the break as Marquinhos scored for PSG before Fred received his marching orders – and Neymar scored in injury time to seal a 3-1 win for the visitors.

Follow all the action at Old Trafford on our Champions League LIVE match blog.

So Manchester United will go to RB Leipzig on the final day needing to avoid defeat to reach the last-16.

That second Neymar goal means that even if PSG were to lose to bottom side Istanbul Basaksehir, United could not afford to lose their game, because of an inferior head-to-head record.

It will all come down to the final day.

It is all over now!

It’s a wonderful counter-attack from the visitors and it ends with Neymar sweeping home from close range. They are taking a big step towards the knockout stage now.

Kylian Mbappe breaks from the edge of his own box and he’s got Neymar in support but Wan Bissaka splits the pair of them so the Frenchman just goes it alone. His low strike beats De Gea but also the far post.

88 mins: Into the final few minutes. Donny van de Beek and Mason Greenwood are on, too, as United seek a leveller.

80 mins: Almost a stunner! Harry Maguire wins a header (he’ll do that) from a deep free-kick and it sits up nicely for Pogba on the volley. His technique is magnificent and he catches it sweetly but it doesn’t quite dip in time.

74 mins: Well United are up against it now. Paul Pogba is coming on to replace Marcus Rashford.

70 mins: I told you. I hope you had every penny on it. Fred is on his way for a second yellow card.

The irony? I’m not even sure this one’s a foul – he’s won the ball. Comical stuff.

VAR will have a look at this but I think this will count!

It’s penalty-box pinball but Marquinhos is just about onside as he pokes home from close range.

Our Favorite Jeans Up for Grabs in the Nordstrom Anniversary Sale