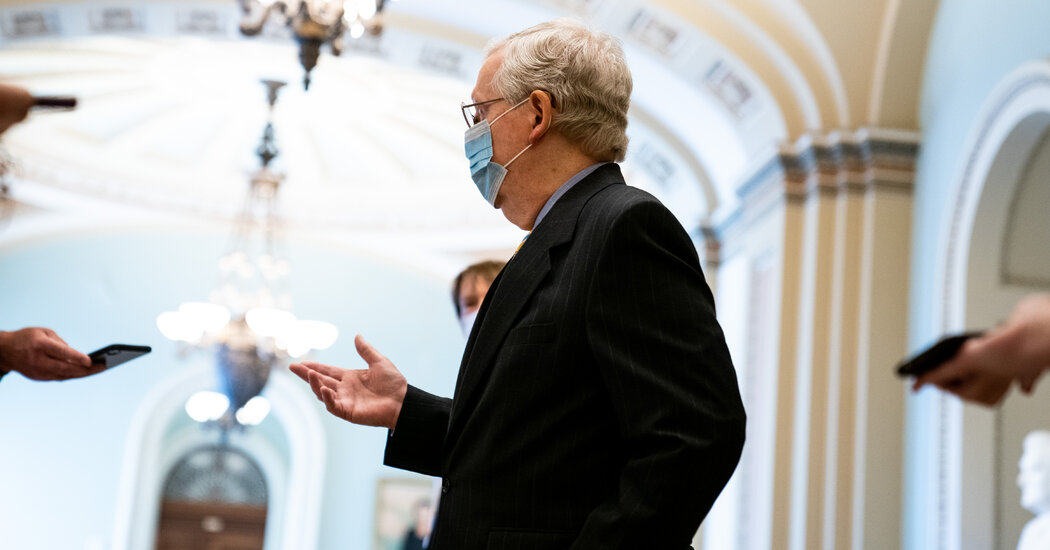 WASHINGTON — Every few years since Congress passed the Patriot Act to bolster F.B.I. surveillance powers following the Sept. 11, 2001 terrorist attacks, parts of it came up for renewal and national security hawks darkly warned that even briefly letting them lapse would unacceptably endanger America.

This year is different.

Those provisions expired months ago, but one of the biggest surveillance supporters in Congress, Senator Mitch McConnell of Kentucky, the Republican majority leader, has single-handedly brought the process of extending them to a halt.

After the House and Senate passed slightly different versions of a bill in May, Speaker Nancy Pelosi appointed a group of House members to a conference committee to reconcile them. But Mr. McConnell has not appointed any senators to it, and the process has been stuck there ever since.

On Thursday, Mr. McConnell closed the Senate for its annual August vacation, meaning that the legislation will remain on ice for at least another month. He has given no sign that he intends to move forward when Congress briefly reconvenes before adjourning again ahead of the November election.

Mr. McConnell’s office has declined to answer questions about why he is keeping the measure in indefinite limbo. But others involved in the process have suggested that Mr. McConnell may be paralyzed by two factors.

First, President Trump, stoking his grievances over the Russia investigation — a small part of which involved wiretapping a former campaign aide under the Foreign Intelligence Surveillance Act, or FISA — has threatened to veto the bill, saying more time should first be spent scrutinizing the officials who pursued the Russia inquiry.

Mr. Trump’s stance has vaguely suggested that the existing bills, which have some reforms, do not go far enough in curtailing the F.B.I.’s surveillance powers for national-security investigations. But the White House has offered no specific proposal or guidance about what he would be willing to sign. And complicating matters, Attorney General William P. Barr opposes the current versions as going too far in the opposite direction of tying the hands of F.B.I. agents fighting terrorism and espionage. Mr. McConnell shares those concerns.

With no clear path to avoiding a veto confrontation with Mr. Trump, and no great love for either version of the bill anyway, Mr. McConnell appears to have decided that leaving the provisions lapsed and doing nothing is the least-bad course of action.

“After they spent years insisting that the Patriot Act was essential to protecting America, it’s striking that Mitch McConnell and Attorney General Barr are willing to wait for months to address it, and still appear to have no plan for moving forward,” said Senator Ron Wyden, Democrat of Oregon, said in a statement to The New York Times.

But there is a catch to the current stalemate: the expired surveillance powers have not lapsed for existing investigations.

Congress specified that the powers would remain available for investigations that already existed at the point the laws expired. Among them are the F.B.I.’s ability to obtain business records deemed relevant to a national-security investigation, and to get special wiretap authority to rapidly follow a suspect who changes phone lines to evade monitoring.

The F.B.I. has existing, open-ended umbrella investigations into all the major national-security threats facing the United States, such as terrorist groups like Al Qaeda and ISIS and nation-state adversaries like Russia and China. As a result, until a new foe arises who cannot be characterized as part of the old ones, the bureau may be able to continue business as usual.

But the bill’s collapse also means Congress has been unable to enact a legislative response to an inspector general’s finding of serious problems with the F.B.I.’s use of the main part of FISA for wiretap orders in counterespionage and counterterrorism investigations.

A report by the Justice Department’s independent inspector general found that the applications used in the Russia investigation to wiretap a former Trump campaign adviser with ties to Russian officials, Carter Page, were riddled with errors and omissions.

A follow-up review by the inspector general that looked at the F.B.I.’s preparations to apply for 29 unrelated FISA wiretaps found that there were problems with all of them, suggesting systemic sloppiness. The Justice Department has since told the FISA court that its own further review of those 29 applications found one material omission and one material misstatement, but also said it did not think either made a legal difference.

But the F.B.I. has also conceded that it should not have applied for two renewals of the Page wiretap in 2017, and it has tightened its own rules and procedures for crafting FISA applications. A FISA court judge also imposed additional safeguards. But Congress has not enacted anything.

The expired provisions are unrelated to the type of wiretaps used in the Russia investigation, but the bill has become a vehicle for addressing those problems. Both the House and the Senate have attached different versions of a provision to more frequently appoint an outside critic to analyze a government’s application in certain types of cases, including those that could touch on a political campaign.

But civil-libertarian-minded lawmakers have also been trying to use the bill to impose other new privacy safeguards. A majority in the Senate backed banning the use of one part of FISA — the partly lapsed provision that permits the F.B.I. to obtain business records without a warrant — for gathering internet search histories and browsing records.

For procedural reasons, that idea fell short despite majority support. When the bill returned to the House, Ms. Pelosi came under pressure to permit a vote on the same idea. But the version that came to the House floor was watered down, losing the support of civil libertarians.

Mr. Trump then came out against the bill for different reasons, and many of his Republican allies abandoned it, too, leading the House to instead send a previously passed version to the conference committee to be reconciled with the Senate version — where it has since remained in limbo, waiting for senators to show up.

“It’s clear there is a large bipartisan majority in both the House and Senate for reforming FISA and the Patriot Act,” Mr. Wyden said. “Even Donald Trump agrees that reform is needed, Leader McConnell and A.G. Barr should allow a real debate on reforming government surveillance.”

Why are indoor settings higher risk for Covid – and are restaurants safe?

California serial killer and rapist, 81, dubbed the I-5 Strangler is ‘murdered’ in prison

Massive vaccine rollout over next 10 days