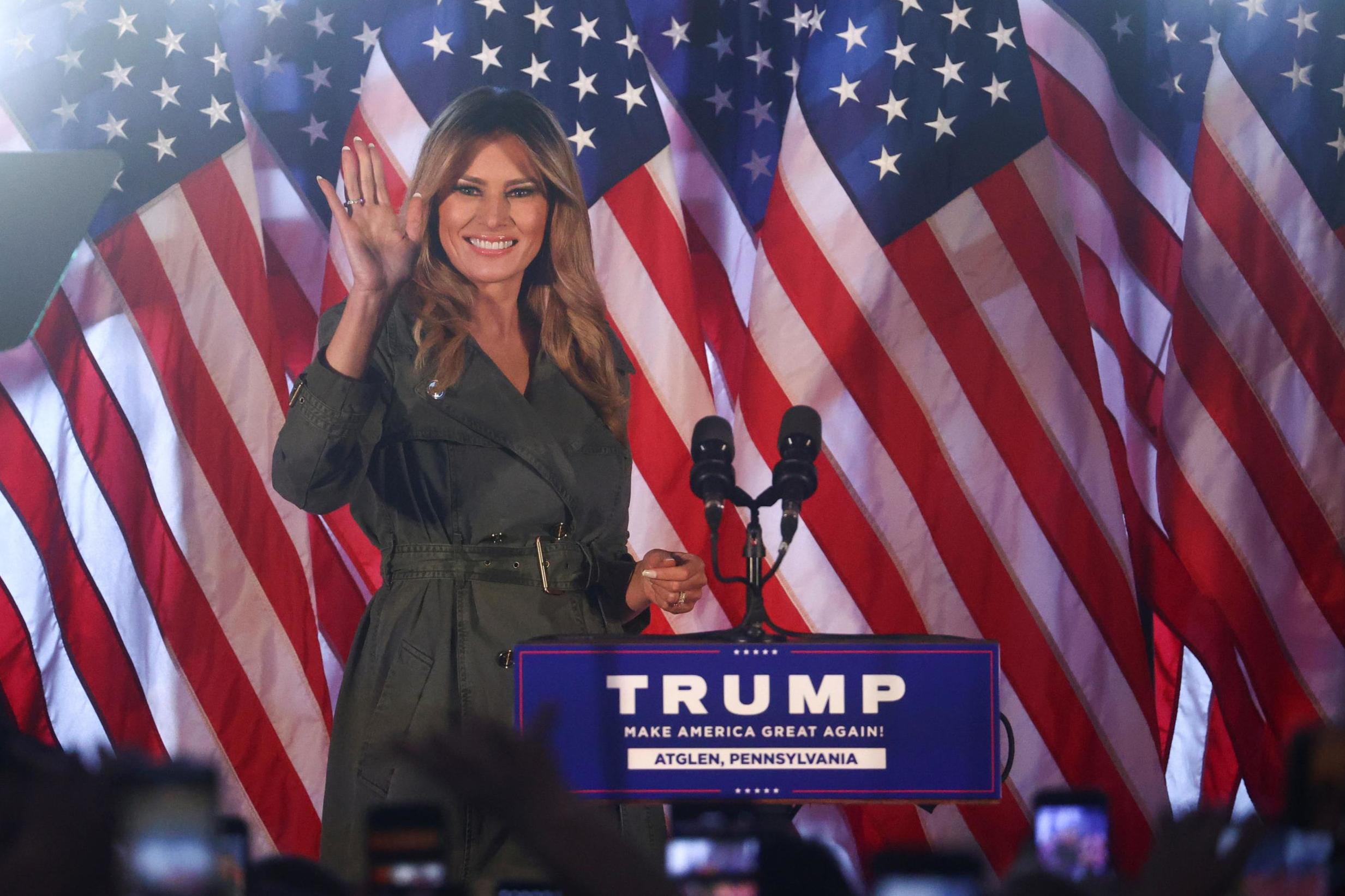 Melania Trump defended her husband’s handling of Covid-19 on her first solo trip of the US election campaign, saying: “we don’t close down and hide in fear.”

The First Lady sought to shift the blame onto the Democrats, who she said tried to “put their own agendas” ahead of the country’s recovery from the pandemic.

She was helping to push the US President Donald Trump’s re-election message as she spoke in the battleground state of Pennsylvania on Tuesday.

Mrs Trump, who recently recovered from what she has described as a mild case of Covid-19, touted the US leader’s record on the virus.

She insisted that schools, restaurants and businesses have learned to operate safely during the pandemic.

“We don’t close down and hide in fear. We get to work to find real and lasting solutions,” she said.

Mr Biden’s “policies and socialist agenda will only serve to destroy America and all that has been built in the past four years,” she said.

“We must keep Donald in the White House so he can finish what he’s started and our country can continue to flourish.”

Covid-19 deaths and hospital admissions in Pennsylvania have more than doubled since the beginning of October.

Mrs Trump also struck an empathetic tone on the virus, calling herself a “worried mother and wife” who knows “there are many people who have lost loved ones or know people who have been forever impacted by this silent enemy”.

But she defended her husband’s handling of the virus and said his administration “chooses to keep moving forward during this pandemic, not backward”, insisting that schools, restaurants and businesses have learned to operate safely during the pandemic.

“We don’t close down and hide in fear. We get to work to find real and lasting solutions,” she said.

The First Lady’s event 50 miles west of Philadelphia drew a couple of hundred supporters who piled into a converted barn typically used for wedding receptions.

Two large doors at the rear were opened to allow fresh air into the building. The overwhelming majority of those in attendance wore masks, but there was little social distancing.

Pennsylvania Democratic Chairwoman Nancy Patton Mills ridiculed Mrs Trump’s campaign stop, saying the First Lady would not have an answer for Pennsylvania’s soaring unemployment rate or why her husband’s administration has “stopped trying to combat a virus that’s killed 8,700 Pennsylvanians and counting”.


Mrs Trump spoke one day after the president held three rallies in Pennsylvania, a state that helped deliver him the White House in 2016 and one that is key to his re-election bid.

Polls show a tight race in the state between Mr Trump and Mr Biden, who also visited the state on Monday to boost get-out-the-vote efforts.

President Trump and the First Lady flew together on Marine One from the White House to Joint Base Andrews before boarding planes for separate campaign trips.

“I’d like to go with her and be with her,” Mr Trump said. “She’s going to make a speech in Pennsylvania. That’s great. She does very well, very popular.”

Holidaymakers are no more likely to get infected than if they stay at home, study suggests

Shakur Hassan: Teenager charged with murder after young man was gunned down in west London

Financial Wellness Is Now a Requirement, Not a Perk