Boris Johnson is today facing the biggest Tory challenge to his leadership since the general election after a group of 50 MPs demanded a lockdown exit strategy and ministers launched a desperate charm offensive to quell the rebellion.

The newly-formed Northern Research Group of Conservative backbenchers has written to Mr Johnson to warn the coronavirus crisis is threatening his pledge to ‘level-up’ the country and could ‘send the North into reverse’.

The group, led by former Northern Powerhouse minister Jake Berry, wants the Prime Minister to publish a ‘clear road map’ for Tier Three areas to leave lockdown as well as an economic recovery plan for the North of England.

Mr Berry insisted this morning the letter does not represent a ‘revolt’ against the PM but it will have spooked Number 10 because many of the disillusioned MPs are from Red Wall seats which propelled Mr Johnson to victory last December.

Mr Berry said the Government needed to do a better job of providing the public with ‘easily digestible’ data to show how the fight against Covid-19 is progressing in order to better incentivise people to stick to the rules.

The letter prompted an immediate charm offensive from Business Minister Nadhim Zahawi as he praised the group’s MPs for acting as ‘champions for their area’.

It came as approximately eight million people in England face living under the toughest Covid-19 restrictions by the end of the week after officials confirmed four separate parts of Nottinghamshire will be thrust into a Tier Three lockdown from midnight on Wednesday, following three days of crunch talks with the Government.

Officials have agreed to adopt the draconian measures in Nottingham City, Gedling, Broxtowe and Rushcliffe in an attempt to drive down transmission.

It will mean all pubs and bars have to close unless they serve meals, while people are banned from mixing with anyone they don’t live with indoors or in private gardens and beer gardens.

Ministers finally confirmed yesterday that Warrington will also be subject to the strictest measures as of today. 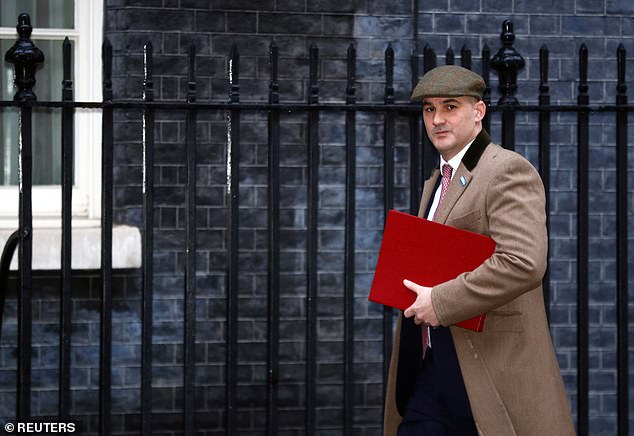 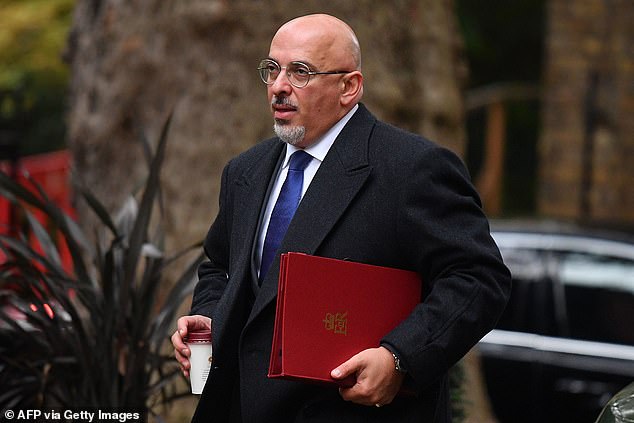 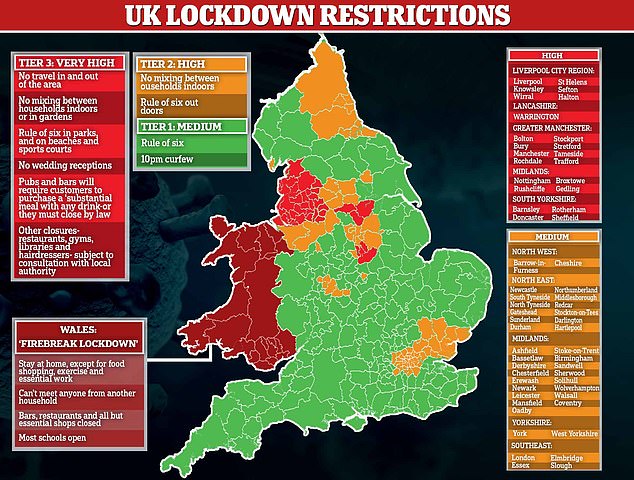 WHAT ARE THE TIER THREE RULES? AND WHEN DO THEY COME INTO FORCE?

Warrington was made subject to Tier Three lockdown rules as of midnight last night.

Nottingham City, Gedling, Broxtowe and Rushcliffe will be part of Tier Three from 00.01am Thursday.

A North-South divide has emerged as a result of the Government’s coronavirus tier system, as all areas under the strictest restrictions are in the North and Midlands.

As well as demanding a ‘road map’ out of lockdown, the Northern Research Group has also urged the Government to prioritise key infrastructure projects and to accelerate job creation in the region.

Mr Berry this morning dismissed claims of a Tory rebellion, telling the BBC’s Radio 4 Today programme: ‘It’s not a revolt, I don’t know how it can be a revolt for northern MPs to write to the Prime Minister to ask to work with him on delivering him on his exciting manifesto that he has a mandate for from December 2019.

‘We are asking for the Government to reaffirm its commitment to stimulate the north by bringing forward a northern growth strategy.

‘The reason we really want to focus on that is, like at my own constituency in East Lancashire, we’re a manufacturing powerhouse in Rossendale and Darwen and probably against all expectations if you look at the purchase managers index PMI for last month the barometer of strength in manufacturing, all parts of the north, including East Lancashire, we’re growing faster than London, I think that really demonstrates to Government that by building this bespoke northern growth plan, the north can be the leaders in building back better and that’s what we’re seeking.’

Mr Berry said the Government needed to do a better job of spelling out to members of the public the data underpinning its coronavirus response.

‘First of all it’s good that the Government has identified the metrics that are going to enable areas to leave Tier Three or Tier Two respectively,’ he said.

‘What I would like to see on a personal basis is that information provided in an easily digestible, consumer facing public friendly way that can show people a route out of these restrictions.

‘The reason we’ve written to the PM asking to work with him on his levelling up agenda as northern MPs is for many areas of the north we have been in restrictions similar to Tier Three, almost identical to Tier Two, since August and that’s why we want to revitalise the PM’s levelling up agenda by working with the Government to deliver for the community we as Northern MPs represent.’

Mr Berry, who represents the constituency of Rossendale and Darwen, said better public awareness could lead to higher levels of adherence to Covid-19 rules.

‘Well I think we need consistent and clear data to be published that not just shows council leaders but the public and businesses how they are doing in tackling this pandemic,’ he said.

‘If you visit any church hall or scout hut around the country you’ll see the thermometer on the wall telling them how they’re getting toward they’re new roof fund.

‘Incentivising people, providing them data, bringing them with you, letting them understand that they’re part of this great battle we’re fighting against Covid will, I think, increase compliance and also a route out of these restrictions is obviously part of a route to recovery which is what we have written to the Prime Minister seeking as a group of northern MPs.’ 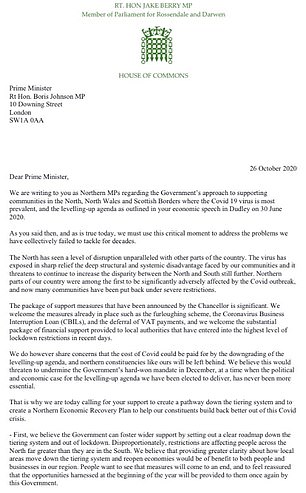 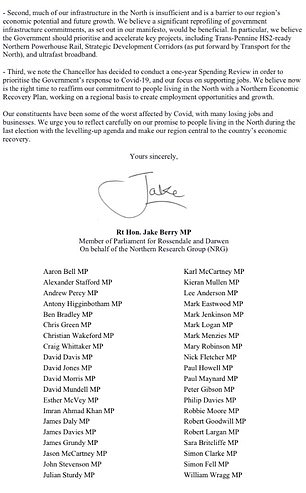 The full letter from the Northern Research Group, which was orchestrated by MP for Rossendale and Darwen Jake Berry 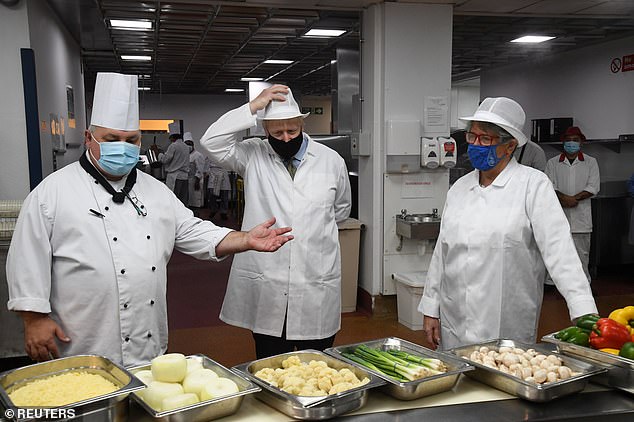 The letter from the Northern Research Group represents a major headache for Boris Johnson, pictured on a visit to a hospital in Reading yesterday

The letter from the Northern Research Group prompted an immediate charm offensive from ministers as Mr Zahawi told Sky News this morning: ‘I think they are rightly champions for their area.

‘They want to make sure that their northern powerhouse strategy that Jake Berry and others have worked so hard on, with myself, I am the local growth minister as well as being the business and industry minister, is delivered and that is absolutely our focus.

‘You will see that coming through as I said in our refresh of the industrial strategy.

‘The industrial strategy was a great piece of work, delivered in 2017, in a world of near full employment.

‘We are entering a very different world today post-pandemic and that is the point they are trying to make I think. As I said to you, judge us by what we do.’

Mr Zahawi told LBC Radio that the Tier Three rules are subject to review every 28 days and that the way out of the top tier was to bring the spread of the virus under control.

He said: ‘There is some good news. I have to be very cautious about this… but what I would say if you look at the the data, where we are working really well together, the rate of increase has slowed down.

‘It’s still too high, and we’ve got to continue to protect our hospitals, make sure that we save lives, protect the NHS and of course protect livelihoods and businesses, which is why this is a balancing act.’

He added: ‘It’s a choice between two harms – the harm of the virus and the harm to the economy and to livelihoods, which ultimately also leads to health harms as well.’

Mr Berry told Number 10 overnight that ‘our party’s return to Government in December was won on the back of hard-working people in constituencies like ours who backed the Conservatives for the first time in a generation, and who did so on the promise that they would not be forgotten’.

‘We cannot forget that we must deliver on our commitments made during that election, to level-up northern communities and create opportunity across our region,’ he added.

Some 40 Conservative MPs have publicly signed Mr Berry’s letter, while a further 14 have had their names redacted. 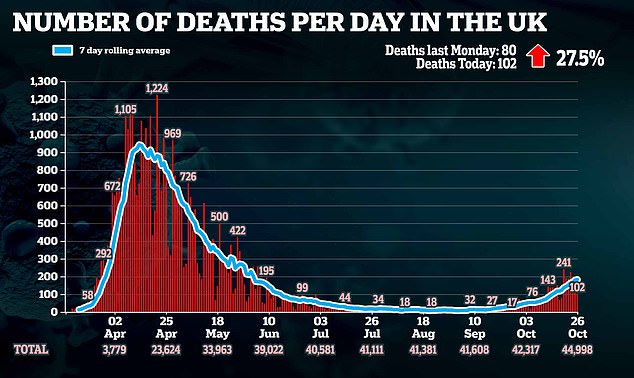 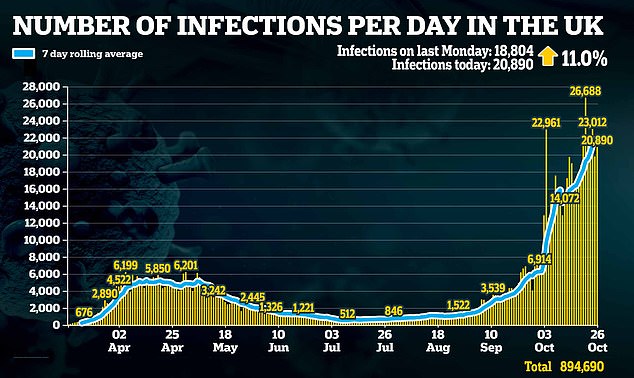 Some MPs have expressed concern that these newly won seats could be returned to Labour at the next election if the Government fails to deliver on its promise to ‘level up’ the country.

A Number 10 spokesman said: ‘We are absolutely committed to levelling up across the country and building back better after coronavirus.

‘We stood at the last election on a solemn promise that we would improve people’s lives, and although the pandemic has meant 2020 is not the year we all hoped it would be, our ambitions for the country are unchanged.’

Labour’s shadow Treasury minister Bridget Phillipson said: ‘Even Boris Johnson’s own MPs know that he cannot be trusted to deliver on his promises.

‘The Government has been treating local communities with contempt.

‘The decision not to extend free school meals is the clearest sign yet that the Conservatives have the wrong priorities and are not on the side of British families.’

The pressure on the PM from northern Tory MPs came as northern council leaders in areas moving into Tier Three expressed concerns about the amount of Government funding they have been given to keep local businesses afloat.

Warrington’s Labour council leader Russ Bowden defended the deal done with the Government but suggested he would have liked more money as the authority entered the top tier.

He admitted that ‘we went in with a larger ask than what we got from Government’ but denied it had been a ‘case of rolling over’.

Warrington council will receive a financial support package of £1.68 million to help contact-tracing and enforcement, as well as £4.2 million in business support from the Government.

Mr Bowden told ITV’s Good Morning Britain: ‘Ultimately we had to make a call whether or not to accept that, that’s what a negotiation is about.’

Meanwhile, councillor David Mellen, leader of Nottingham City Council, said it is ‘difficult to tell’ whether the city has secured enough support because all areas have been given a ‘flat rate’.

He told BBC Radio 4’s Today programme: ‘I think we have additional responsibilities of running a big city, and the city centre in particular has additional needs.

‘I’m not sure that all of that will be covered in what we’ve been promised from the Government.’

He said costs and lost income from the first wave of Covid-19 ‘were not fully met as was promised’, meaning that budgets are ‘strained and stretched’.

Meet Luka The Reading Robot: It Can Read Over 90,000 Titles From Nursery Rhymes To Audiobooks

Australian expat, 62, dies in Bali after three-week battle with COVID-19