Downing Street has moved quickly to try to reassure exasperated parents that schools will open full-time again in the autumn – despite reports that Ministers were considering introducing a ‘part-time rota system’ in September.

Many working parents were left infuriated by mixed messages from Education Secretary Gavin Williamson over whether full-time schooling would return before the summer holidays, and now they’re left wondering whether it really will start again this year.

Yesterday, it was claimed that there were ‘murmurings’ in Whitehall that schooling would still only be part-time when pupils returned from their holidays, as Ministers struggle to plan for what they fear will be a second wave of the virus. 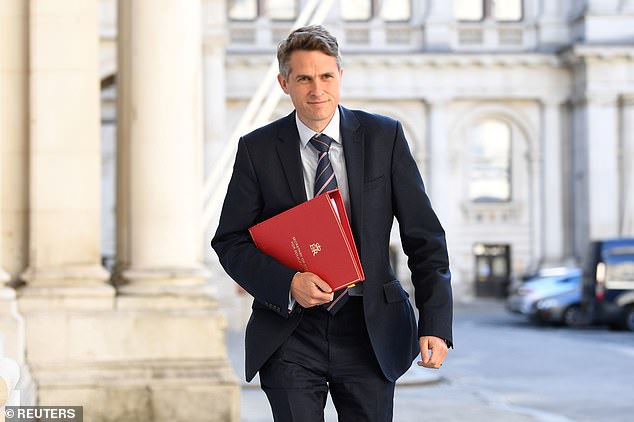 But a senior source said: ‘The Prime Minister is absolutely committed to the full re-opening of schools.

‘Parents are becoming increasingly confident in their children returning to school, which is testament to the work of school staff across the country who are putting in place a range of protective measures to prepare to welcome back all pupils at the start of term.

‘These should be proportionate and follow the system of controls, while ensuring that pupils receive an ambitious and broad curriculum in all subjects from the start of the autumn term.’

Mr Williamson has been accused by critics within his party of ‘rolling over’ in the face of opposition from the teachers unions, who claim that returning to full school operation would jeopardise the health of their members.

In an attempt to defuse the opposition, Mr Williamson says he will introduce new protective measures, including reducing the size of classes, keeping children in small groups, minimising mixing with others, staggering breaks and lunch times, as well as drop-offs and pick-ups, increasing the frequency of cleaning, reducing the used of shared items and utilising outdoor space.

Pupils will also be expected to wash their hands more often than usual and ‘ensure good respiratory hygiene’. ‘The Prime Minister is absolutely committed to the full re-opening of schools,’ according to a senior source

No10 advisers realise that a return to something approaching normal working life for parents will be impossible if they are also juggling the demands of childcare, and say schools should be ‘the last thing’ to be locked down again.

However parents will still face challenges because schools are reluctant to offer the after-school clubs, which extend the school day beyond mid-afternoon.

A Government spokesman said: ‘It is our plan that all pupils, in all year groups, will return to school fulltime from the beginning of the autumn term.

‘As we know, school is the best place for children to learn and enjoy being back with their teachers and friends. There are no plans for a part-time rota system. ‘Rotas do not provide the consistency of education and care we want to reintroduce.’

Experts warn that enforced home schooling during the lockdown has also widened the divide between high and low-income households, with poorer families unable to afford the technology required for home learning.

They say it has also exposed the academic gulf between state and private schools, which have been able to make extensive provision for remote teaching.

Tasmania to delay reopening its borders