The predicted heatwave has defied national expectations, with many places being even hotter than originally forecast.

Temperatures reached 38C in parts of Sydney, with people taking to the water wherever they could.

While in Victoria, the mercury was nudging just over 40C in Mildura, as the head hit the northwest of the state.

And it’s expected to all happen again tomorrow, as the south-eastern states of Australia continue to swelter.

Meanwhile communities in the northern parts of Western Australia are mopping up after a tropical low dumped heavy rain across the Kimberly and Pilbara overnight.

Just after midnight, the system, which was initially expected to turn into a cyclone, was located well inland from the Eighty Mile Beach area, near Telfer.

A monsoon trough is also looming over the tropics, with northern parts of Queensland and the NT receiving thunder and showers.

There is also the possibility the trough may turn into a cyclone later this week.

Sydney will be sunny with a minimum of 21C and maximum of 33C in the city.

Further west, Penrith is tipped to reach 40C tomorrow, with high temperatures also forecast for Parramatta and areas of the lower Blue Mountains.

Scorching temperatures are forecast for the ACT with sunny conditions and a top of 38C for Sunday.

The south and west of NSW are expected to also suffer, with temperatures at Griffith, Wagga Wagga and Broken Hill set to top 40C.

Mildura in the state’s north-west is predicted to peak at about 44C tomorrow.

In Melbourne, temperatures are expected to reach 35C, before peaking at 40C on Monday.

Brisbane tomorrow will be slightly cooler, set to peak at 29C, but temperatures will be higher in other southern parts of the state, with a prediction of 43C in Birdsville.

The tropical low over the far north is expected to become more active, bringing with it more rain.

Temperatures are set to get even hotter with tomorrow forecast to reach 41C in the city before dropping into the mid 30s on Monday and Tuesday.

The heat is elevating the state’s fire danger with a severe warning for the Mount Lofty Ranges today. 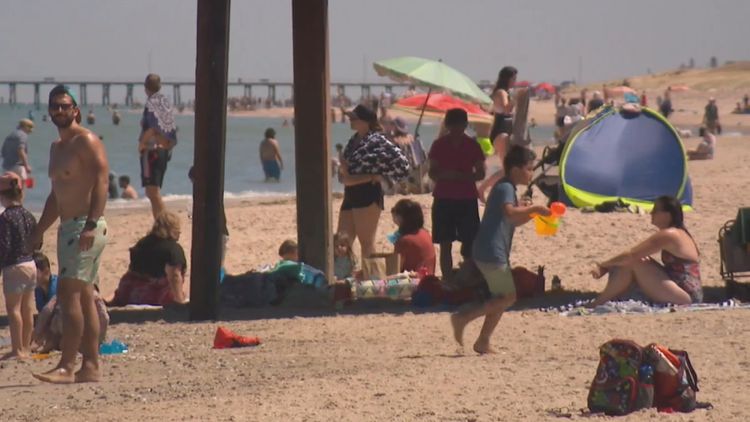 Meanwhile there is a severe fire danger warning for Goldfields, Eucla and Ninghan due to high temperatures, dry conditions and gusty winds.

Perth will be mostly sunny with a minimum of 17C and a maximum of 26C.

Showers/storms, warm in the north. Mostly cloudy, very warm over the interior. Late thunder, very warm-to-hot in the south.

There’s a chance of storms in Darwin, where temperatures will run from 25C-30C.

Hobart is set to be cloudy with a top of 26C.

– Reported with Weatherzone and Australian Bureau of Meteorology