Mother-of-two, 55, embraces her grey locks after years of dye 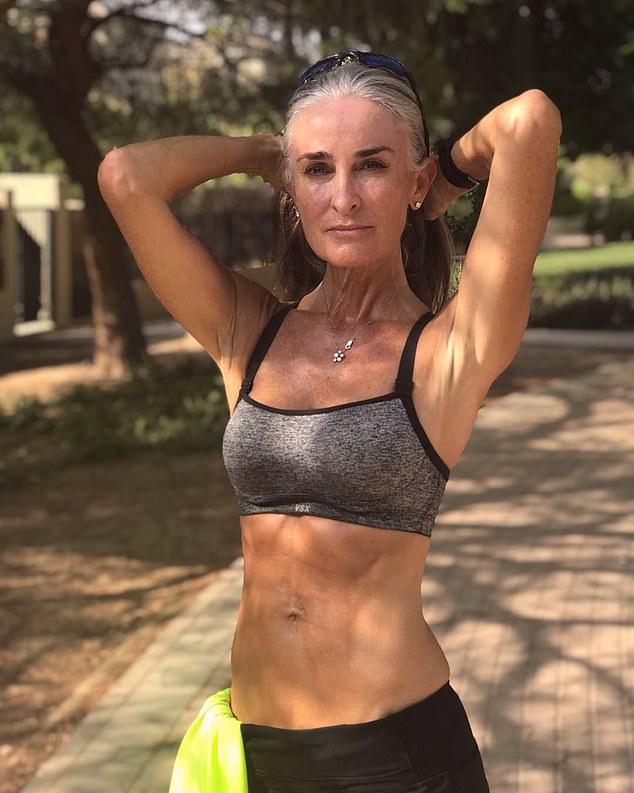 A 55-year-old woman who embraced her grey locks after years of dye has revealed the secret to her youthful looks and claims ‘expensive creams’ are not the way forward.

Caroline Labouchere, from Islington, London, was abandoned by her father as a child, which caused her to feel insecure with a fear of growing old.

The mother-of-two, who suffers intermittently from depression, spent her twenties and thirties feeling ‘needy and insignificant’, and fought the signs of ageing by dyeing her already greying hair.

However, in November 2017, her daughter Amelia, 23, who was working as a model , suggested that her boss was looking for a grey hair ambassador – and Caroline has never looked back since, with her shoots published in British Vogue.

Caroline Labouchere, from Islington, London, has spoken of the benefits of walking and jogging to keep youthful

Speaking about her childhood, Caroline said: ‘My parents divorced when I was a baby.

‘I understand there are two sides to every story, but my father leaving left me feeling abandoned and untrusting of men.

She continued: ‘My mother re-married when I was six and I found myself in a very different world of Lords and Ladies, living in the English countryside.

After leaving school at 16, Caroline enrolled on dress making and top cooking courses, with her mindset focused on eventual marriage and children.

She married a military man and followed her husband around the globe, living in almost 20 different houses. Pictured: Caroline enjoying the beach in Kailua-Kona Hawaii

She said: ‘I didn’t like school and I left at sixteen. I did a Cordon Bleu cooking course and a dressmaking/pattern-cutting course.

‘There were no career plans, just travel, marry and have a family.’

Caroline, who married at 27, said: ‘Army life led to many house moves all over the world. Two children by five IVF attempts.

‘Maximilian is twenty-five made in Ottawa, Canada. Amelia is twenty-three made in Delhi, India.’

After taking the modelling opportunity in 2017, Caroline has never felt happier with how she looks and believes ageing is in the mind

‘I have dutifully followed my husband around the world; protecting, loving and bringing up my family as best as I can.

‘In my twenties and thirties, I felt insecure, needy and insignificant.’

Caroline continued to feel average in her looks throughout her forties and early fifties and dabbled in ways to fight ageing.

She would dye her grey hair and made sure she fitted in with her female friends by using anti-ageing creams, having facials, Botox and fillers as well as taking diet pills and exercising.

In November 2017, her daughter Amelia, 23, (pictured) who was working as a model , suggested that her boss was looking for a grey hair ambassador

Caroline revealed how she has tried a range of skincare treatments but taking advice from a dermatologist is the way forward. Pictured: Caroline in Kailua-Kona, Hawaii

But after taking the modelling opportunity in 2017, Caroline has never felt happier with how she looks and believes ageing is in the mind.

‘I have never wanted to look old. In this day and with advances in modern medicine, cosmetics and nutrition, it’s not necessary,’ she said.

‘I started working on my modelling after my daughter’s boss asked me to be the face of his brand.

‘I was repeatedly published full-page in British Vogue. I had never felt beautiful before that – properly beautiful, like people feel on their wedding day.’

And Caroline revealed how she has tried a range of skincare treatments but claimed taking advice from a dermatologist is the way forward.

Caroline (pictured in Dubai, left) said she cuts back on sugar and carbs in the week. Caroline working on her balance and posture in the gym (right)

Caroline said: ‘I’m much more confident and braver than I was in my twenties and thirties’ (pictured with her personal trainer)

She said: ‘I never eat breakfast and during the week I don’t eat sugar and, generally, very few other carbs.

‘Expensive creams and procedures are not necessarily the way forward. I have tried PRP, Botox and fillers.

‘I recently had Profhilo and I’m very impressed with the results. Taking the advice of a good dermatologist is the best way forward. My skin has never been so good.

‘I’m much more confident and braver than I was in my twenties and thirties. I go to events alone and say yes to almost everything.

Caroline (pictured aged 30) during a military wives night out. In her twenties and thirties she felt ‘insecure, needy and insignificant’

Caroline said she wants to age ‘gently ward off the signs of ageing’ and looks to celebrate her grey hair. Mother-of-two pictured after her first spray tan (right)

Caroline on a photoshoot in the desert. The mother-of-two has repeatedly been featured in British Vogue

‘Embracing every opportunity. Luck is when opportunity meets preparedness.’

She continued: ‘I think men still prefer younger women. I get attention and it’s overwhelmingly positive but don’t call me ‘old’.

‘My chosen maintenance makes me feel better than I have ever felt before, mentally and physically.

‘I set goals, last summer I targeted and completed a 100km ultramarathon. I’m not yet sure what this year’s goal is.

‘Younger ladies are intrigued by age and as I am the same age as many of their mothers they do compare me.

Caroline (pictured completing the Creek Half marathon) said: ‘I set goals, last summer I targeted and completed a 100km ultramarathon. I’m not yet sure what this year’s goal is’

And Caroline (pictured with daughter Amelia), who documents her positivity on Instagram , said: ‘We can encourage each other at every age. It doesn’t cost anything to be kind

‘It makes me accountable as I have a responsibility to those who see me as an example.

‘My secret to ageing gracefully is sleep, nutrition, exercise, self-respect and making the best of what I have.’

Caroline said she wants to age ‘gently ward off the signs of ageing’ and looks to celebrate her grey hair by continuing her modelling career for as long as she can.

‘I don’t try to look younger I just want to maintain my skin,’ she said.

‘I will age gracefully and gently ward off the signs of ageing.

‘I would like to encourage women to speak out loud about what they do to make themselves their best selves – Not to hide their fabulous secrets or to use filters.

She said her secret to ageing gracefully is sleep, nutrition, exercise and self-respect while making the best of herself

‘To live life, not wait for life to happen. I got such a positive reaction that I have continued and grown.’

And Caroline, who documents her positivity on Instagram, said: ‘We can encourage each other at every age. It doesn’t cost anything to be kind.

‘To maintain a youthful figure try walking. It has to be the easiest, cheapest form of exercise.

‘Walk to a lamp post, jog to the next, work your way up from there. Don’t push yourself but be consistent.

‘My lifestyle has given me a platform to encourage women of all ages to make the best of themselves.’

Man Killed While Standing On Sidewalk In East Chatham

Coronavirus: The symptoms difference between COVID-19 and hay fever – are you at risk?

Cancer symptoms: Five signs on your skin that could signal the deadly disease