The shattered widow of a young carpenter who died one month after being diagnosed with terminal brain cancer says she will do everything in her power to ensure no other family is left without a father like her three beloved children.

To anyone who knew them, Chloe and Peter Cook were the picture of ‘happily ever after’.

The high school sweethearts devoted themselves to raising daughter Ava, four, sons Chaz, three, and one-year-old Reed in Colac, the lakeside town they grew up in 150 kilometres south-west of Melbourne.

Their world came crashing down when Peter, 29, was diagnosed with stage four glioblastoma, an inoperable and incurable form of brain cancer with an average life expectancy of 12 months. The father-of-three had just 32 days.

‘I still can’t believe he’s gone. I can’t wrap my head around never seeing him again, it just blows my mind.’ 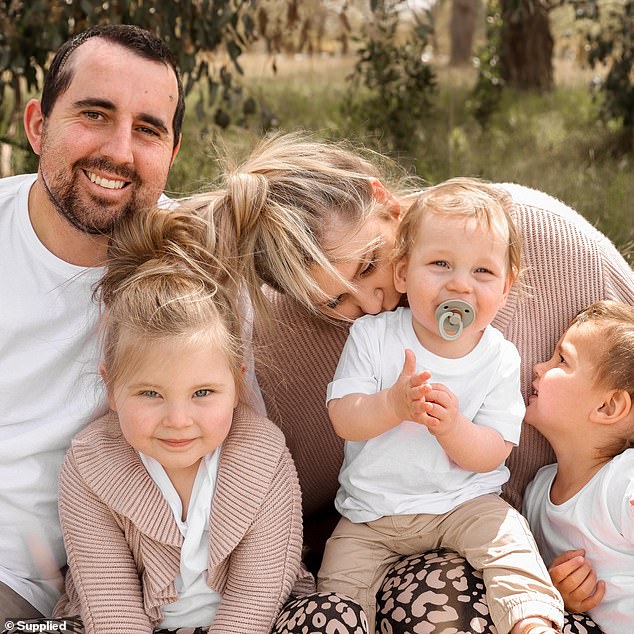 Chloe and Peter Cook were the picture of ‘happily ever after’, raising their children Ava (left), Reed (centre) and Chaz (right) in Colac, the lakeside town they grew up in 150km south-west of Melbourne 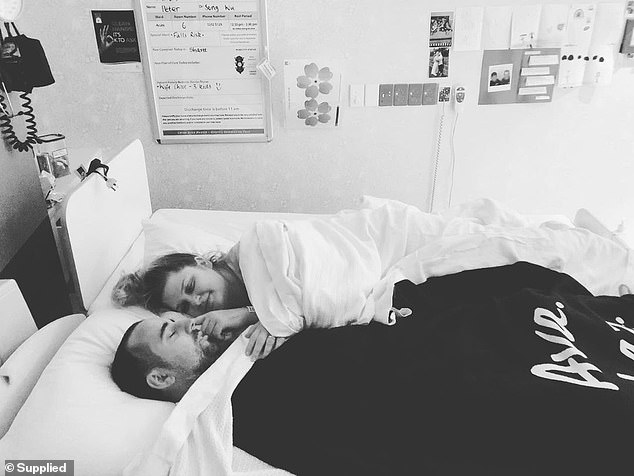 Peter started to experience intense fleeting headaches and an uncharacteristic loss of appetite in the first half of 2020, but it wasn’t until late July that his health took a frightening turn.

Crippled by the excruciating pain in his head, by that time almost constant, he saw a GP who immediately referred him for scans and blood tests at a local medical centre.

The journey to and from that facility on July 28 was the last time he would ever drive a car.

A call from the doctor three hours later revealed a ‘large mass’ was growing on Peter’s brain, but the couple were assured it was ‘low grade’ and likely benign.

‘We were both in shock but we definitely didn’t think this would be something that would take him,’ Chloe said.

‘It’s like, you look at people with tumours and you think, “doctors will fix you and life goes on” – we thought we’d just go back to living ours.’ 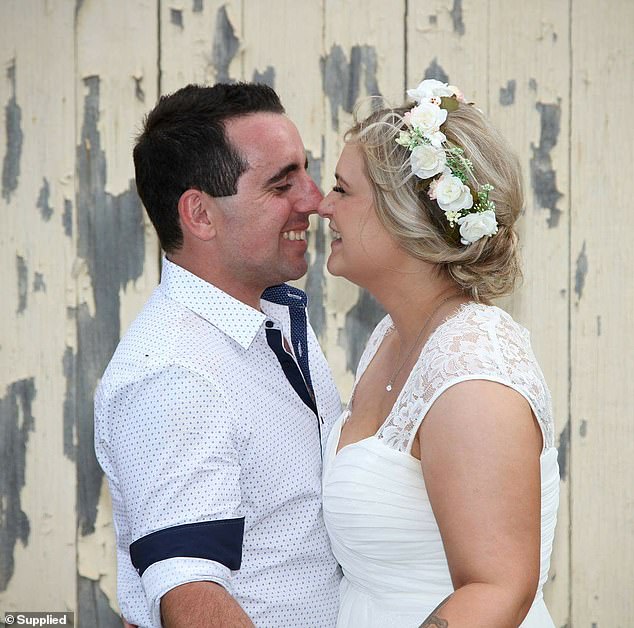 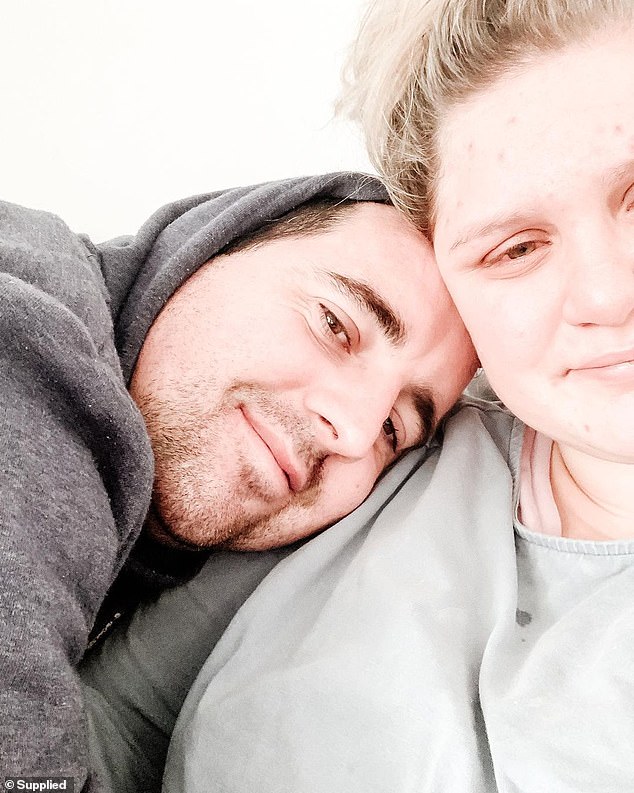 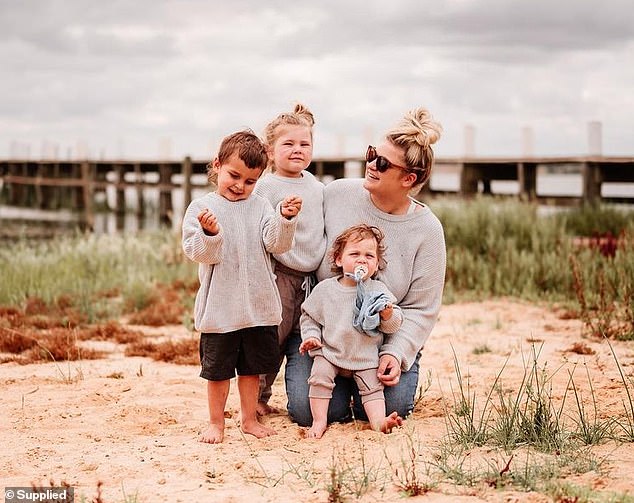 Chloe has been left to raise her three kids (Ava, centre, Chaz, left and Reed, on his mother’s lap) alone

An assessment at a major Melbourne hospital on July 29 confirmed the growth was inoperable due to its position deep in the cerebral cortex.

But a shunt inserted to drain fluid from the mass instantly alleviated Peter’s headaches, raising hopes his condition could be managed with treatment.

Those dreams were dashed weeks later when Chloe woke to find Peter gazing ahead with a ‘blank stare’ that told her something much more sinister was at play.

‘It was like the lights were on but no one was home. He lost the sparkle in his eyes,’ she said. 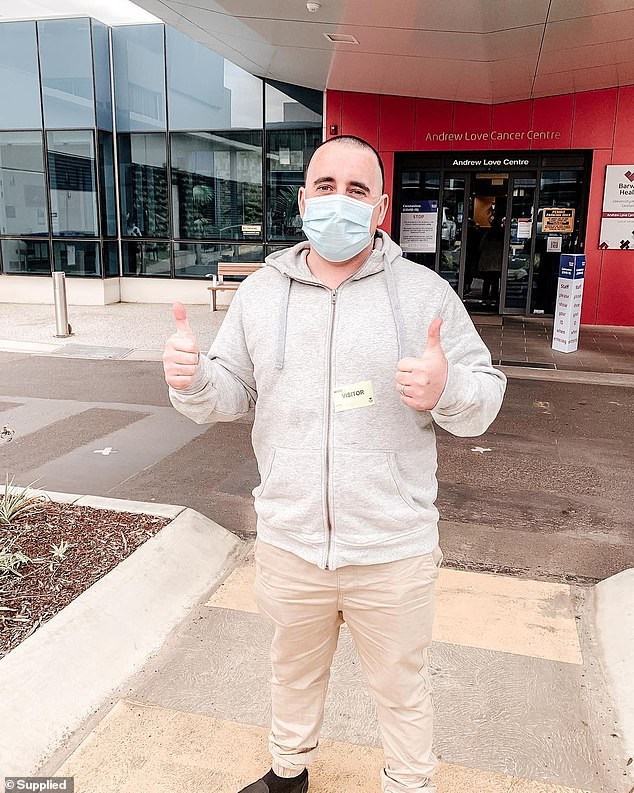 A shunt inserted to drain fluid from the mass saw Peter (pictured at a radiation centre in Geelong) improve, raising hopes his condition could be managed with treatment 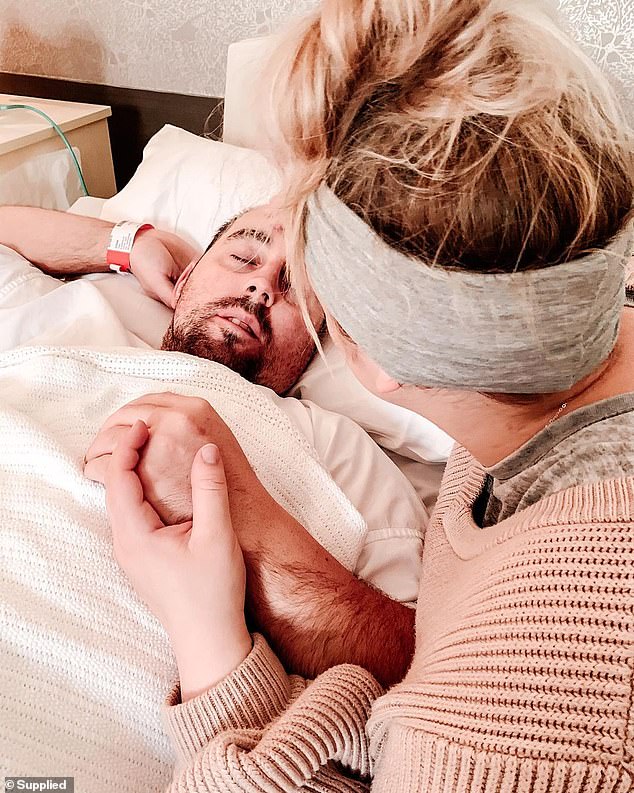 With Peter becoming increasingly disoriented, losing his balance and suffering persistent short-term memory lapses, the couple returned for a CT scan on September 20 which showed huge volumes of fluid collecting on his brain.

A biopsy taken during a second shunt surgery looked positive and doctors reiterated that the mass was ‘low grade’ and treatable with chemotherapy and radiation which would shrink it to manageable size.

‘I was on a high, that sick feeling in my stomach was gone,’ Chloe recalled.

But the high was short-lived. 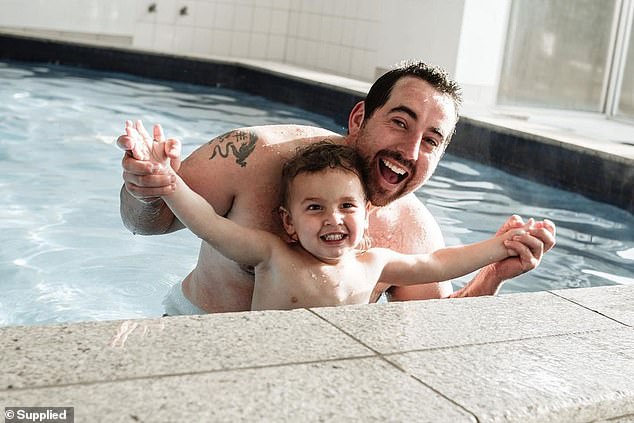 The doting father (pictured with three-year-old son, Reed) believed he would survive right up until the day he died

Peter’s health deteriorated with frightening speed and he began to suffer limb spasms, delusions and extreme fatigue that saw him sleep more than 20 hours a day.

At a meeting with neurosurgeons on October 5, Chloe and Peter were given the devastating news that the tumour was stage four glioblastoma.

He was allowed to return to Colac to be with his family until his illness became so grave that Chloe could no longer care for him at home.

‘He was always outside playing with the kids, making them breakfast. He was a great dad but that part of him was gone then,’ she said.

Peter spent a week in palliative care before losing his battle on the evening of November 6. 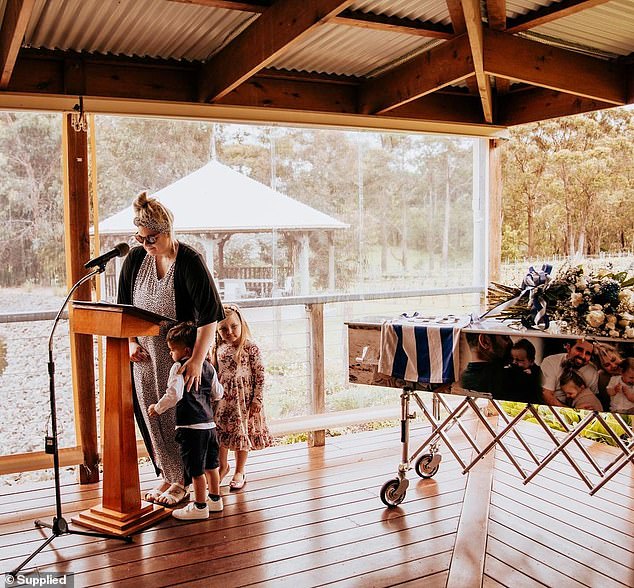 Peter lost his battle on November 6 and was laid to rest one week later on November 13, in a ceremony attended by his friends and family including little Ava, four, and Chaz, three (pictured sticking close to their mother) 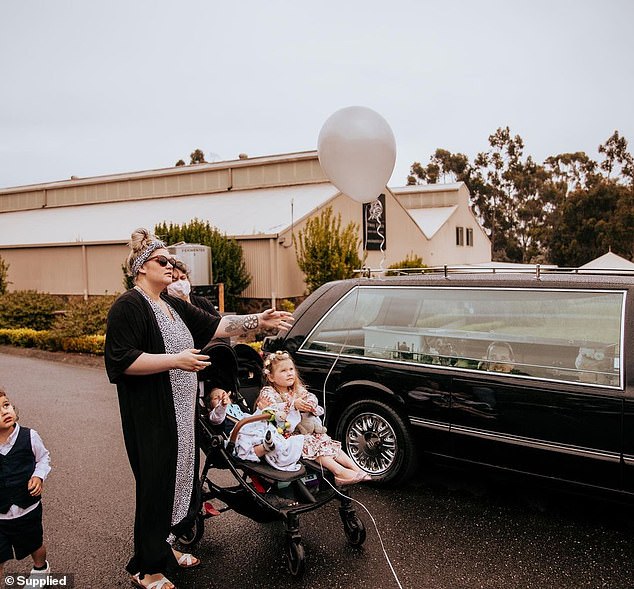 He was laid to rest one week later in a ceremony on November 13.

Peter’s children farewelled their father by releasing a balloon that floated over his hearse.

Chloe said it was ‘unimaginably difficult’ to watch the love of her life bedridden and unable to speak as he lost control of his bodily functions.

‘It just happened so fast. I knew he was never going to come home and he didn’t,’ she said.

‘He still believed he’d be back at work, he believed that right up until the day he died.’ 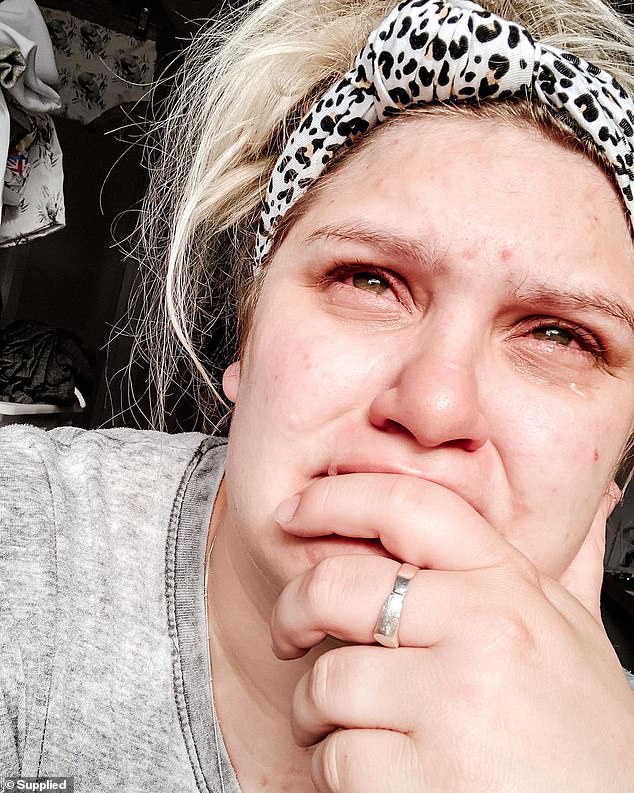 Peter Cook is one of roughly 1,879 Australians diagnosed with a brain tumour each year, government health data shows.

While annual figures for glioblastoma patients are not regularly recorded, a 2013 report lists 982 new cases in Australia.

But as Peter’s story proves, the disease can progress rapidly and insidiously with scarcely any symptoms.

When glioblastoma has advanced to level four, patients are given a prognosis of 12 to 14 months.

‘You hear of people passing away, you read these stories, but I never thought I’d be the one telling it.’

Glioblastoma is a rare and highly malignant brain tumour that typically develops in the cerebral hemispheres of the brain (the main body), but can also occur in any area of the brain or spinal cord.

They are particularly malignant because they grow rapidly, supported by an extensive network of blood vessels connected to the brain.

It is most common in older adults, but can also occur in children and teens.

Symptoms include headaches, nausea, vomiting, double vision and confusion or sudden change in mental clarity. More specific symptoms depend on the location of the tumour and the functions affected.

For example, glioblastoma that occur near the motor cortex – the part of the brain involved in movement – can cause loss of sensation on one side of the body.

Since sharing her story on her Instagram page ‘The Cookie Clan‘, Chloe has been inundated with messages and said she is ‘blown away’ by the number of lives claimed by brain cancer.

‘All in it was only 104 days from the time they found the mass and 32 days from the glioblastoma diagnosis until he passed,’ she said.

‘Our lives have changed so much, so quickly.’

Brave Chloe is channelling her grief into raising awareness about brain cancer, selling children’s clothing she designed with her husband before his death with 15 percent of profits donated to Australian charities and support foundations. 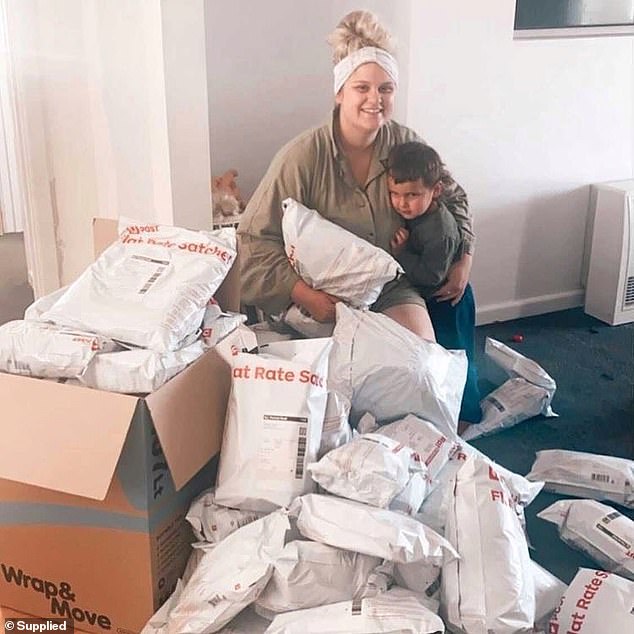 Sell-out sales have raised $3,000 in the three months since Peter’s death, providing a faint glimmer of light amidst the darkness.

‘I keep thinking he should be here to see this,’ Chloe said.

She said it is her life’s mission to fight for better treatment and a cure for brain cancer so other families are spared the heartbreak hers are going through.

‘I get to talk about him and share our story everyday,’ she said. ‘I’m grateful for that.’

For more information on glioblastoma and other types of brain tumours, please visit the Australian Cancer Council or Brain Foundation.

Man Carjacked While Sitting In Parked Car In River North

African gangs cause chaos in Melbourne