Mum sparks a heated debate over the best way to fold a bath towel – so how do you do yours?

Australians are locked in a lively debate over the correct way to fold a towel.

The discussion began when a Brisbane mother posted a photo of three towels laid out differently in a Facebook group, asking members to vote on their preferred method.

The first is doubled over itself in a straightforward fashion, while the second is draped elaborately in the style you might find in a five-star hotel.

The third is rolled up in a cylindrical shape and takes up the least room, ideal for saving space in the closet.

‘The great debate! Best way to fold a towel. Cast your vote below,’ the woman wrote in the caption. 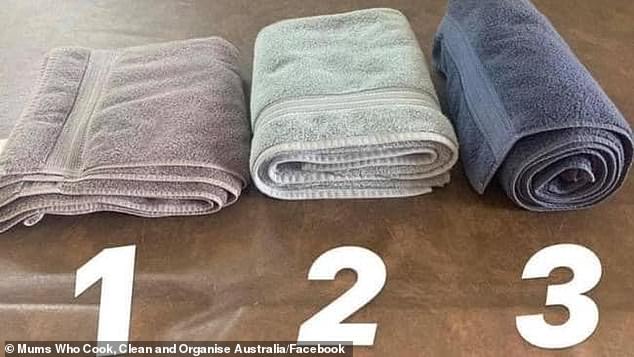 The photo that sparked a viral debate: A Brisbane mother shared this image of three towels in a Facebook group, asking members to vote on their preferred method of folding

How do you fold your towels?

The post quickly went viral, racking up 1,300 comments in the 18 hours since it was shared Tuesday night.

One woman argued there is a place for all three approaches.

‘Two for the cupboard, three on display in the bathroom and one regardless of where it’s going if you are my husband,’ she said.

People with experience in the hotel and retail industries went for the second option.

‘Two. My husband worked in a hotel for a few years and it can’t be any other way apparently,’ one woman said.

A second added: ‘The second. There is no other way!’

‘Number two – years of working in the Manchester department as a teen taught me this,’ said a third.

She also revealed how to perfect the elaborate ‘hotel fold’: fold the towel in half, then fold a third of the way in before folding it in half again. 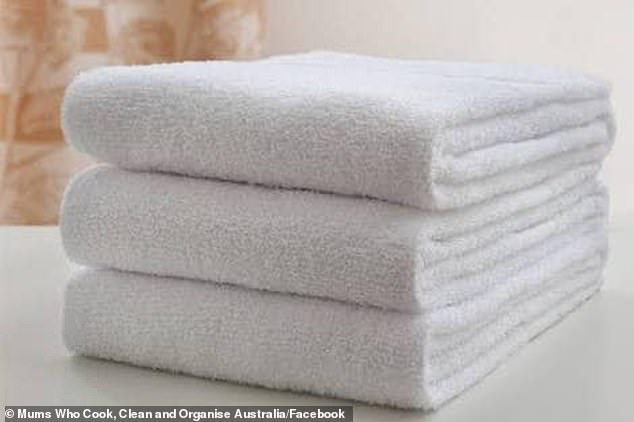 The ‘hotel’ fold, which involves folding the towel in half, then folding a third of the way in before folding it in half again, was by far the favourite method

‘Three. Only changed recently but it’s so much easier! You just can pull out any towel without having to dig around messing up others, plus looks better,’ one woman said.

But not everyone agreed, with one woman asking: ‘What kind of psychopath does number three?!’

The least popular method was the simple double fold, which hardly anyone voiced support for.

Mahlambi: Why I had to leave Mamelodi Sundowns for AmaZulu FC