NASCAR crew member, 30, and his new bride, 23, die in car crash while on Florida Keys honeymoon

A newlywed NASCAR team member from North Carolina died on his honeymoon alongside his bride in a head-on collision in the Florida Keys.

William ‘Rowdy’ Harrell, 30, and Blakely Harrell, 23, died at the scene of the accident on Lower Matecumbe Key around 9:40pm on Wednesday.

The couple had married four days previously, on November 21. 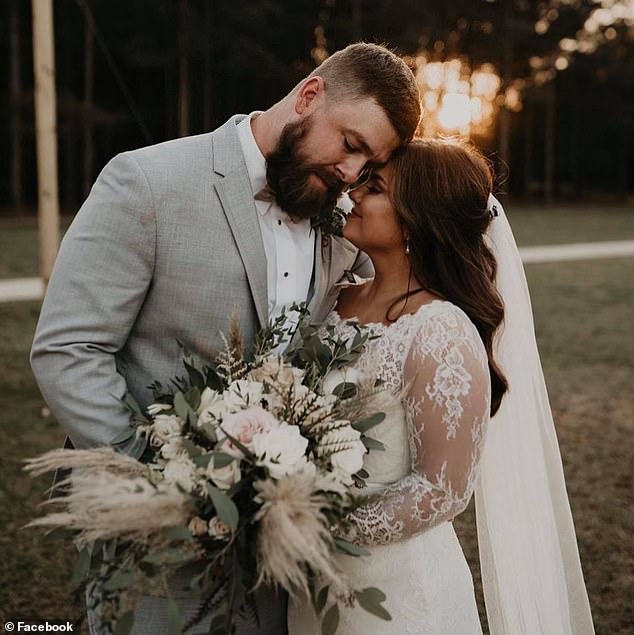 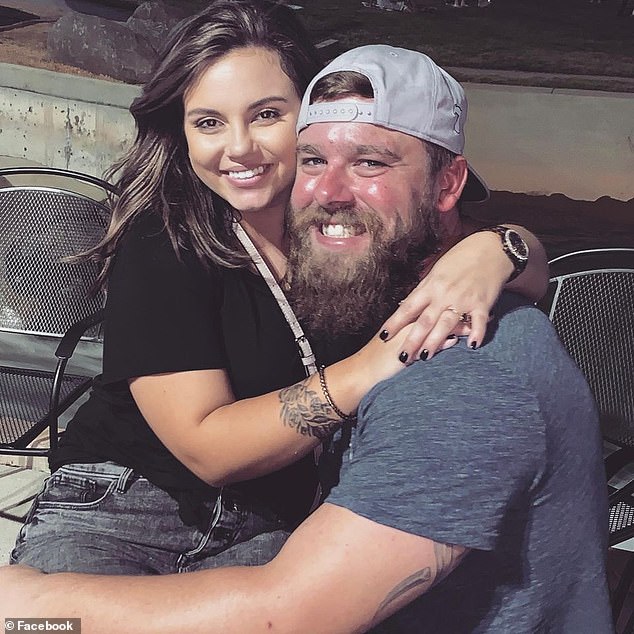 The couple died four days after their wedding, leaving friends and relatives in shock

According to a Florida Highway Patrol report, Harrell was driving a 2020 Toyota Corolla north on U.S. 1 at mile marker 76 when the car passed over the center line into southbound traffic.

The FHP is investigating whether alcohol was a factor in the crash, the Miami Herald said.

He smashed into a Ford F-250 pickup truck, which swerved to avoid the couple but could not get out of their way.

The 62-year-old driver from Tennessee suffered minor injuries and was taken to Mariners Hospital in Tavernier.

His two passengers – a 58-year-old woman from Tennessee and a 62-year-old Florida woman – were critically injured and flown to mainland hospitals, where their condition remains unclear.

All those involved were wearing seatbelts. 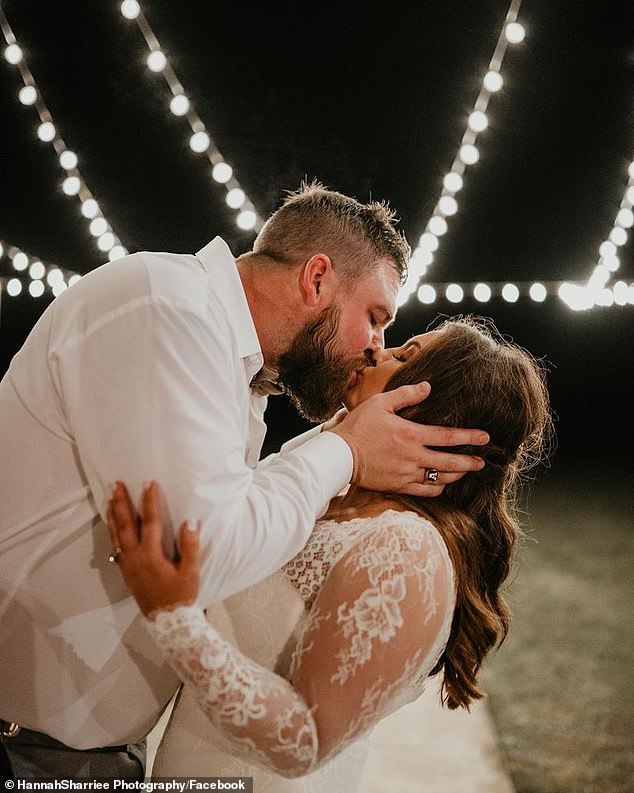 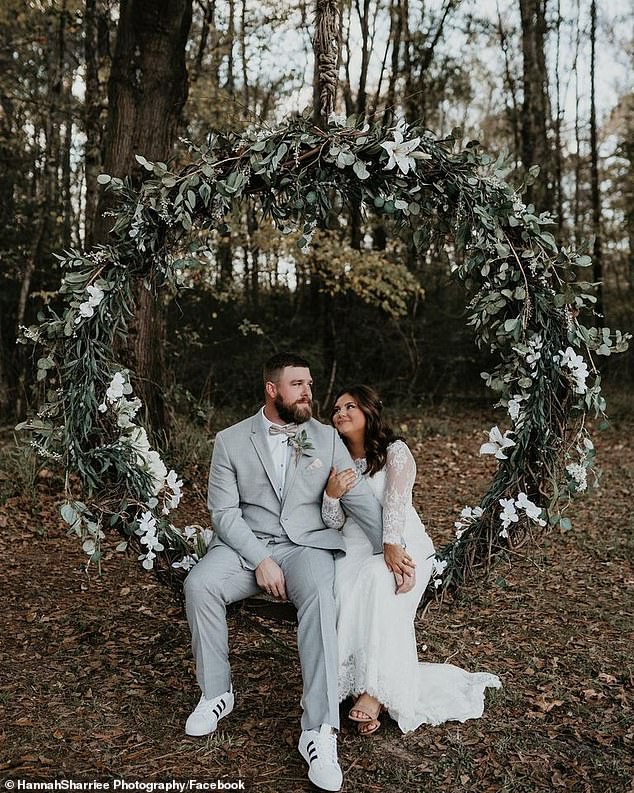 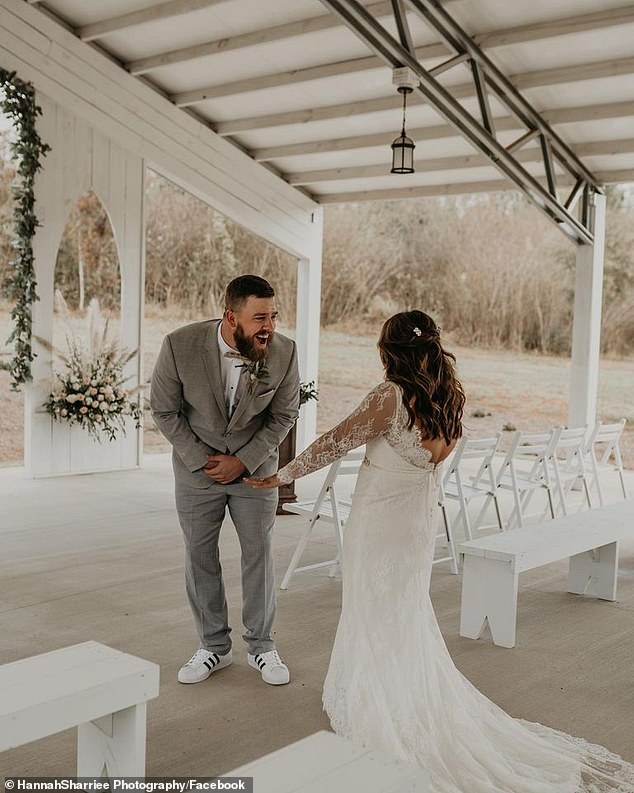 Sharriee, photographer, said they ‘were filled with excitement for their future life together’

The Harrells’ friends and colleagues were in shock at their death.

Rowdy Harrell had worked for the Hendrick NASCAR team as a pit crew member for the past eight seasons, and had previously worked two seasons for JR Motorsports, according to the Hendrick statement.

Before his NASCAR career, Harrell played three championship seasons as a middle linebacker for the University of Alabama football team. 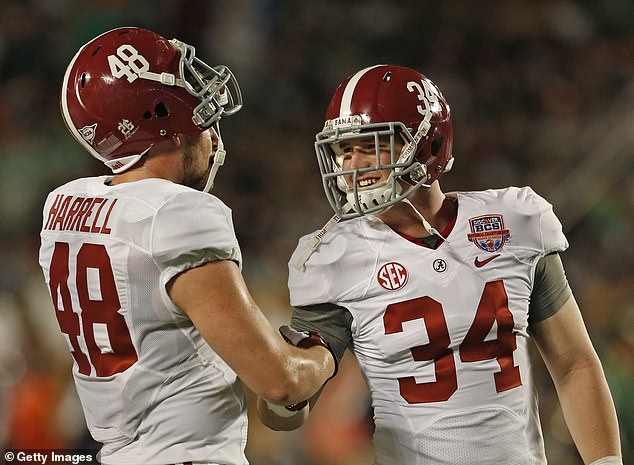 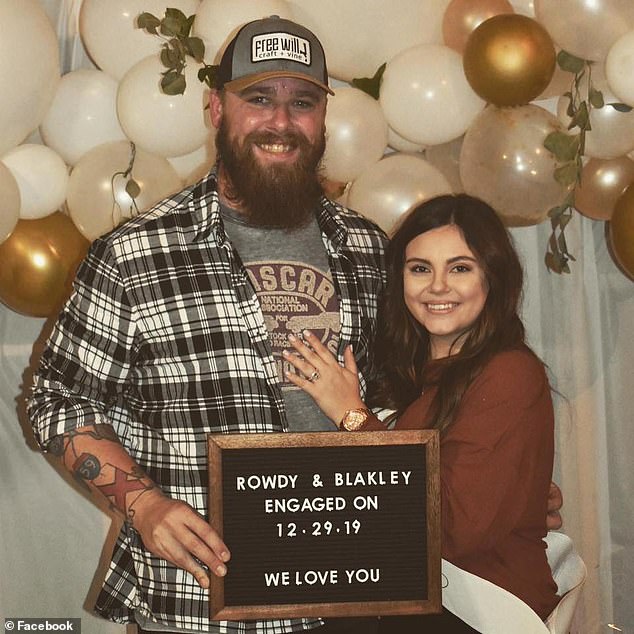 The couple had been planning their wedding for almost a year

‘Our thoughts and prayers are with the Harrell and @TeamHendrick family,’ said NASCAR’s official account.

Greg Ives, Harrell’s crew chief, said that his ‘entire team is absolutely devastated at the loss of Rowdy and Blakley.’ 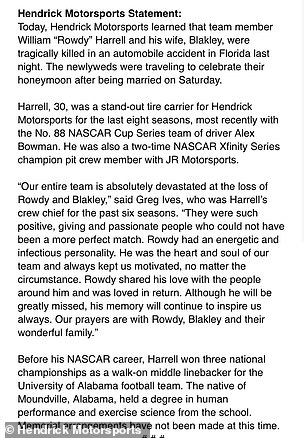 ‘They were such positive, giving and passionate people who could not have been a more perfect match,’ he said.

‘Rowdy had an energetic and infectious personality. He was the heart and soul of our team and always kept us motivated, no matter the circumstance. Rowdy shared his love with the people around him and was loved in return.

‘Although he will be greatly missed, his memory will continue to inspire us always. Our prayers are with Rowdy, Blakley and their wonderful family.’

Bowman paid an emotional tribute to his colleague and friend.

‘Rowdy was everything that made the 88 team, the 88 team. The biggest personality and the best person,’ he said.

‘He was the happiest person you’d ever meet, and that was only re-enforced by his wife Blakley. Rip to an absolute legend. You’ll be missed every single day brother.’ 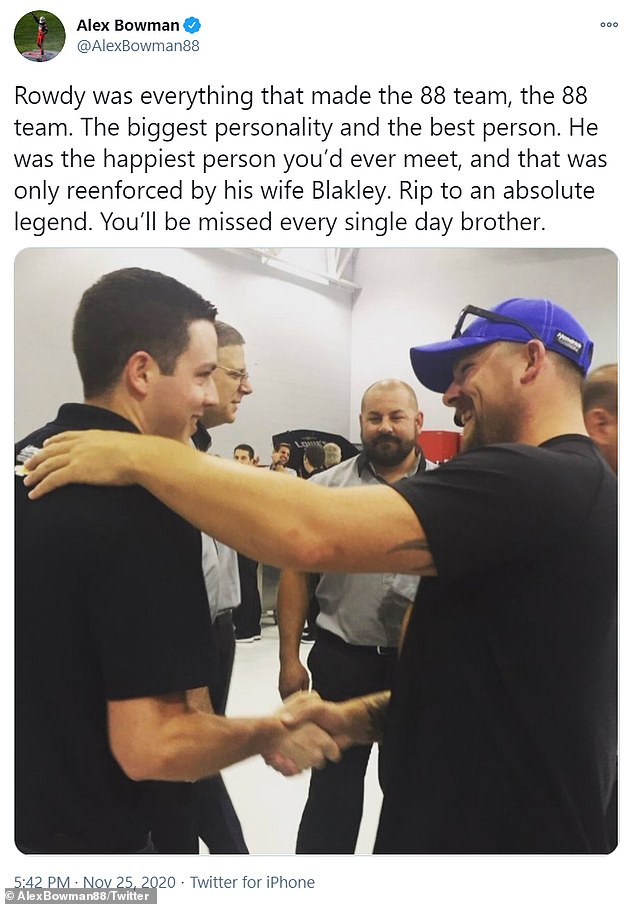 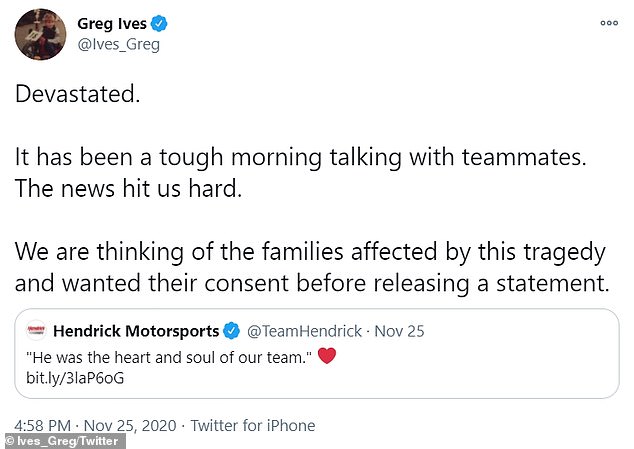 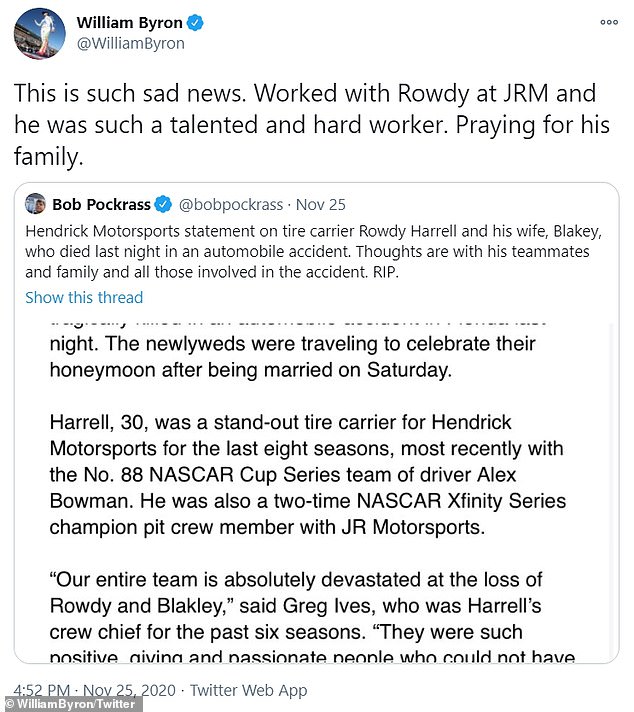 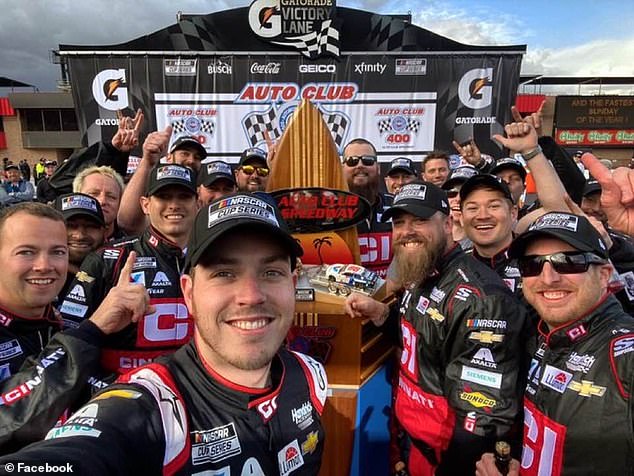 Another driver on the team, William Byron, also spoke of his sadness at the news.

‘This is such sad news. Worked with Rowdy at JRM and he was such a talented and hard worker. Praying for his family,’ he said.

Others remembered their wedding day, only four days before the accident.

Manky Jeffers said: ‘This morning we woke up to the most tragic news. Our cousin Rowdy & Blakley Harrell were killed in a car accident while on their honeymoon in Key West. They were just married on Saturday. They both said that they married their best friend.

‘We are all still in disbelief and it just doesn’t seem real.’

Hannah Sharriee, their wedding photographer, said the couple’s love for each other shone through.

‘I asked her what was the priority for her wedding day. She simply said ‘spending time loving Rowdy’,’ Sharriee recalled.

‘These two loved each other so hard and it was obvious.

‘Blakley and Rowdy both were so inviting and loving when I met them for the first time on their big day. It felt as if we had been friends for years. They were surrounded by so many people who loved them deeply. They were filled with excitement for their future life together.

‘My heart hurts so much finding out they passed last night while on their honey moon. They had so much ahead of them.

‘Be sure to tell your loved ones how much they mean to you. Even if you’re choosing to social distance this holiday season give them a FaceTime call.’