‘Naughty Tory’ Charlie Elphicke will today appear at the Court of Appeal to challenge his conviction for sexually assaulting two women nearly a decade apart.

The disgraced 49-year-old was jailed for two years in September last year after being found guilty of three counts of sexual assault following a month-long trial at Southwark Crown Court.

The former Conservative MP for Dover immediately signalled his intention to appeal against his conviction. The Ministry of Justice will not identify the prison he is being held at for ‘privacy reasons’.

His wife, Natalie, who took over the constituency from her husband in 2019, ended their 25-year marriage upon his conviction.

However, she has offered her support for his appeal, saying: ‘There is no doubt that Charlie behaved badly. However, everyone, Charlie included, has the right to a fair trial, and I don’t believe that he has had one.’ 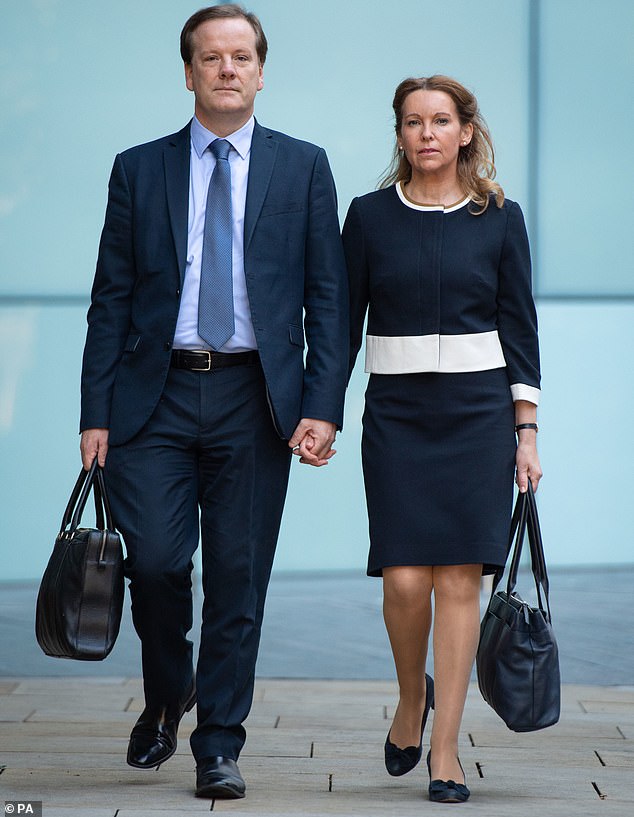 The disgraced 49-year-old was jailed for two years in September last year after being found guilty of three counts of sexual assault following a month-long trial at Southwark Crown Court. He is seen with his estranged wife, Natalie, in July. They have since split

His case will be heard at the Court of Appeal in London today.

Sentencing him last year, Mrs Justice Whipple said: ‘You’re a sexual predator who used your success and respectability as a cover.

‘You required both women to come to court and give evidence about the assaults you had made on them.

‘That was not easy for them and they displayed great courage.

‘They told the truth, you told a pack of lies – not just to the jury but, as became clear, to your wife, the whips and the police as well.’

She said ‘the gross breach of your position of power’ meant a sentence of immediate custody was required.

He was also ordered to pay £35,000 in costs, although his lawyer said he had ‘a fair bit of debt’ and that his estranged wife Natalie Elphicke loaned him £100,000 to pay for legal bills.

It emerged his 20-year-old daughter Charlotte had become estranged from him while his wife, his successor as Dover MP, ended their 25-year marriage upon his conviction.

In a statement, Elphicke said he would appeal against the conviction, adding he was ‘innocent of any criminal wrongdoing’. 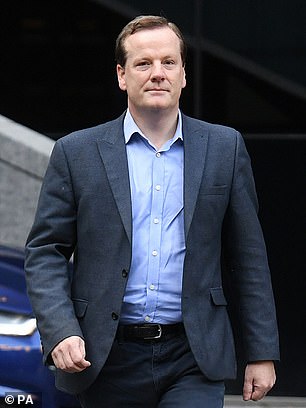 Mrs Elphicke also offered her support to her estranged husband, adding: ‘There is no doubt that Charlie behaved badly.

‘However, everyone, Charlie included, has the right to a fair trial, and I don’t believe that he has had one.’

Jurors at his trial heard the first offence took place when Elphicke invited a woman in her early 30s to share a drink with him while his children were asleep and his wife was away with work in the summer of 2007 – the first time she had been absent since the birth of their son.

The woman said Elphicke asked her about bondage and sex, then kissed her and groped her breast before chasing her around his home.

The second complainant said Elphicke also tried to kiss her and then groped her when they met for a drink in Westminster in April 2016.

He then told her: ‘I’m so naughty sometimes.’

She said she spurned Elphicke’s sexual advances, telling jurors she was physically repulsed by him and that he told her he had ‘not been happy for years’ in his marriage.

She said he assaulted her again the following month when he ran his hand up her thigh towards her groin.

Elphicke said he kissed the first victim because he initially felt it was something they both wanted.

He told jurors he was ‘besotted’ with the second complainant, but denied assaulting either of them.

The court heard Elphicke initially denied any knowledge of the allegations against the parliamentary worker when he was summoned before Tory party whips in January 2017.

He became a government whip under David Cameron’s premiership in 2015, but returned to the back benches when Theresa May came to power the following year.

Elphicke had the party whip suspended in 2017 when allegations of sexual assault first emerged, but it was controversially reinstated a year later for a crucial confidence vote in then-prime minister Mrs May.

The whip was withdrawn again the following summer when the Crown Prosecution Service announced its decision to charge Elphicke.

His appeal will be heard by three senior judges from 10.30am.

Chemicals in plastic ‘may contribute to postpartum depression’