Two furious neighbours became embroiled in a pubic spat after one Covid-infected mother handled the other’s Chinese takeaway when it was sent to her house by mistake.

Covid-positive Lauren Marshall was wrongly delivered a Chinese takeaway intended for her neighbour Kim Robson in Sunderland, Tyne and Wear.

After Ms Robson, 36, questioned why Ms Marshall had accepted the delivery in the first place she was subjected to a tirade of menacing abuse.

Ms Marshall threatened Ms Robson by saying she would ‘burst your lips’ and break down her door. 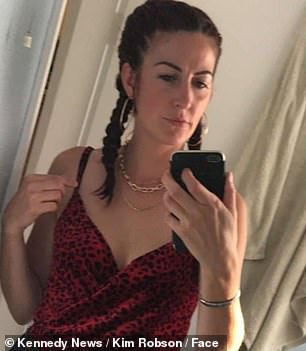 After Ms Marshall initially accepted the takeaway and kept a bottle of Fanta to ‘mix with her vodka’, the delivery driver returned to take back the wrongly-delivered food.

Ms Marshall then took to Facebook to rant that the restaurant had taken the ‘contaminated’ meal from her to pass on instead of cooking a new one.

Ms Robson, who had been waiting for her Chinese takeaway to arrive when she saw the post, questioned why Ms Marshall had accepted the delivery in the first place. 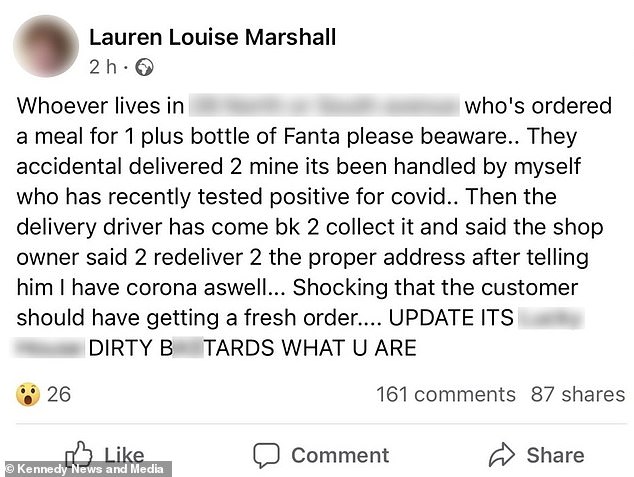 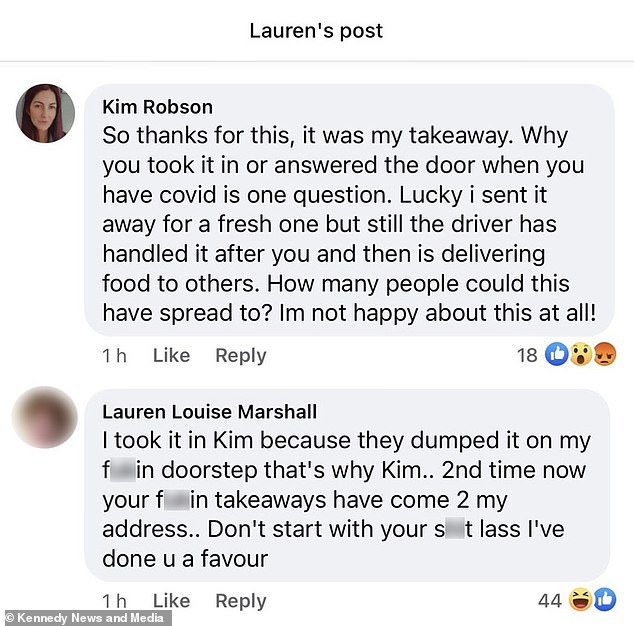 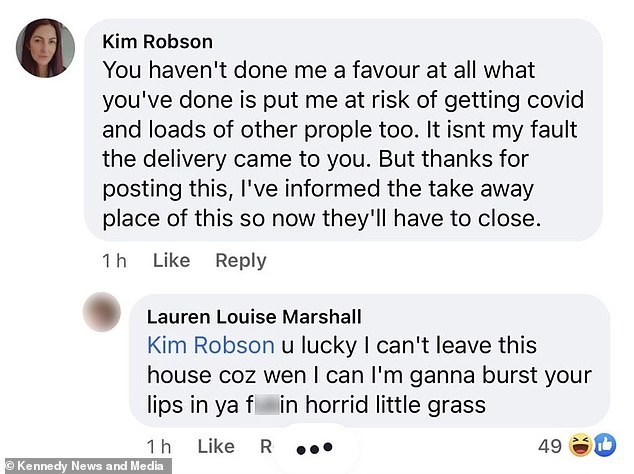 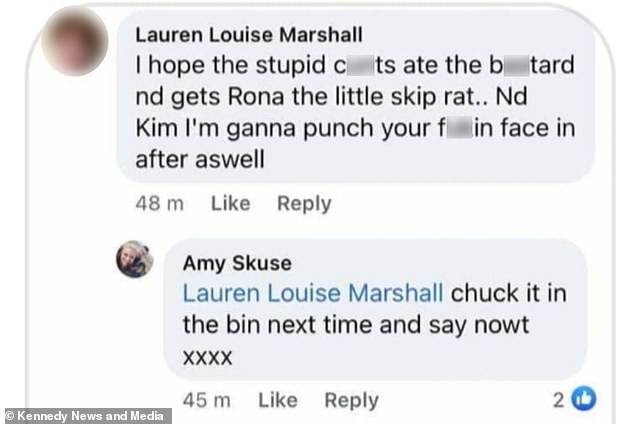 Furious Ms Marshall tried to defend herself by telling Ms Robson she’d done her ‘a favour’ before telling her not to ‘start with her s***’ as it was the second time her takeaways had come to the wrong house.

Lauren Louise Marshall’s Facebook post said: ‘Whoever lives in [address redacted] who’s ordered a meal for one plus bottle of Fanta please beware* They accidentally delivered to mine.

‘It’s been handled by myself who has recently tested positive for Covid. The delivery driver has come back to collect it and said the shop owner said to redeliver to the proper address. After telling him I have corona as well.

‘Shocking, that. The customer should get a fresh order. Update: It’s [name of restaurant]. Dirty b******s what you are.’

Kim replied: ‘So thanks for this. It was my takeaway. Why you took it in or answered the door when you have covid is one question.

‘Luckily I sent it away for a fresh one but still the driver has handled it after you and then is delivering food to others. How many people could have spread to. I’m not happy about this at all.’

Kim disagreed, saying: ‘You haven’t done me a favour at all. What you’ve done is put me at risk of getting covid and loads of other people too.

‘It isn’t my fault the delivery came to you. But thanks for posting this. I’ve informed the takeaway place of this now so they’ll have to close.’

Lauren furiously responded, saying: ‘U lucky you can’t leave this house coz when I can I’m gonna burst your lips in ya f****** horrible little grass.

The mother-of-three then launched into a tirade of abuse telling Ms Robson she was ‘lucky she had Covid’ or she would ‘burst through her door and burst her lips right now’.

Her post claims she told the delivery driver she’d tested positive for Covid when she passed the order back, but Ms Robson maintains the driver said he was not made aware.

Ms Marshall even boasted she kept a bottle of Fanta from the order to ‘mix with her vodka’ and also insisted she hopes the takeaway workers ‘get covid’.

‘I’ve lost a close friend recently to coronavirus and it really scares me, so I just thought it was stupid when she’s saying that she’s done a good thing, but it didn’t feel like it at the time.

‘I said thank you for sharing the post and then I expressed my concern and she just went wild and I was quite nervous about what was going to happen next.

‘We live quite close to each other so it was quite possible that she was going to knock on my door.

‘The driver tried to bring the parcel to my house and you could tell it’d been opened.

‘The driver said he had to go and get another bottle of pop because [Ms Marshall] used it for her vodka.

‘When I told the takeaway company about it they were quite upset and said she hadn’t told them she had Covid, otherwise they wouldn’t have tried to take it from her.

‘I don’t think she intended to put me at risk and I do think she was genuinely worried about passing the virus on, but at the same time I think she should have thought about it more.

‘Maybe I was in the wrong for saying what I said, but it was heat of the moment and really confusing about why she’d do that.

‘So I do understand that the post was a warning, which is why I’ve messaged her since to say I’m sorry you mis-read my message. I didn’t want to fall out over it.

‘Maybe she shouldn’t have touched it at all, and if she had taken it in don’t give it back to the delivery driver knowing you’ve had coronavirus.’

Ms Robson says the restaurant delivered her another Chinese takeaway shortly after she’d told them about what happened – which she says she still enjoyed despite the row.

A Northumbria Police spokesperson said: ‘We can confirm we have received a report of offensive messages posted on social media. Enquiries are ongoing to establish whether any criminal offences have been committed.’