Nicola Sturgeon today attacked the UK Government’s ‘shambolic’ plans to exempt a swathe of countries from quarantine travel restrictions as she insisted Scotland will not be ‘dragged’ into making changes.

Transport Secretary Grant Shapps finally paved the way this morning for summer holidays by releasing a 60-strong list of countries which will no longer be subject to 14 day self-isolation rules.

However, Downing Street has been unable so far to secure the agreement of Scotland, Wales and Northern Ireland for the plans which means they will only apply to England when they come into force on July 10.

Mr Shapps demanded Ms Sturgeon bows to ‘logic’ and accept the proposed way forward as he said he hopes the other nations will follow England’s lead before the rules are eased.

But the SNP leader responded with fury as she accused Mr Shapps of overseeing a ‘shambolic decision making process’.

She said the UK Government had failed to adequately consult the devolved administrations on the plans as she claimed the list of proposed safe countries had constantly changed.

Ms Sturgeon said she will ‘take time to properly and rationally consider’ any changes as she warned there could well be differences between Scotland’s and England’s quarantine exemptions lists.

That would mean that anyone who flies into an English airport from a country not on Scotland’s safe list would still be required to self-isolate if they then travelled north of the border.

The publication of the list has been repeatedly delayed with the UK Government blaming the devolved administration in Holyrood for dragging its feet. 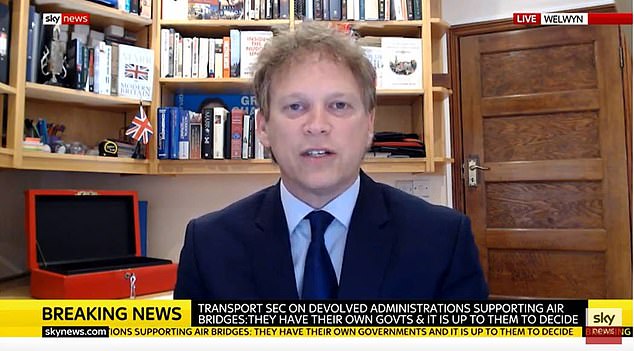 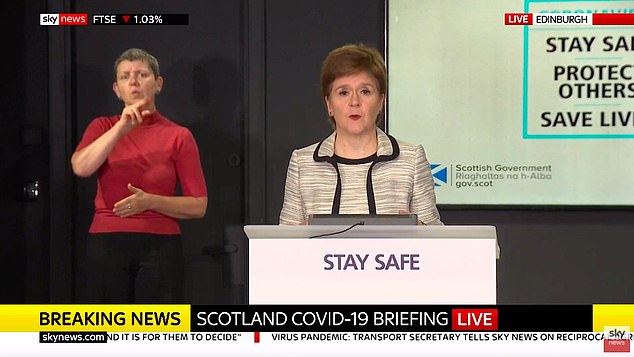 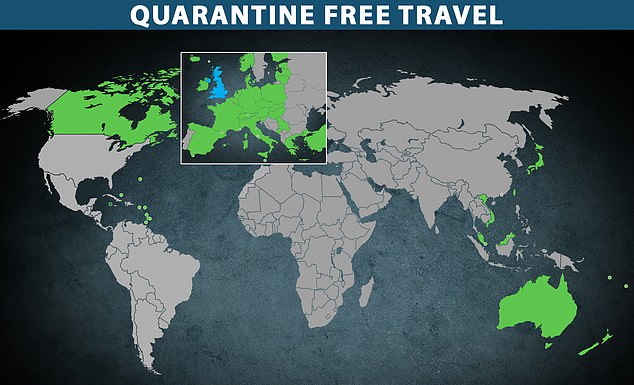 The Transport Secretary revealed that France, Italy, Spain, Germany and New Zealand will be among around 60 destinations on a safe travel list from July 10.

They will be split into a ‘traffic light’ system, with unconditional ‘green’ ratings for those with very low coronavirus rates, such as New Zealand.

Greece will also not be approved, as it has declared that arrivals from the UK will be ordered to self-isolate.

Mr Shapps said he had hoped to announce a UK-wide approach but Scotland, Wales and Northern Ireland had failed to so far agree to the plans.

He told Sky News: ‘At the beginning of the week I said I would announce this by the end of the week and I was hoping to do it a day or two earlier but we haven’t managed to get the devolved administrations to sign up to it yet.

‘This won’t come in until July 10 so there is still an opportunity for them to do that.

‘It is obviously a decision for them to make so as you said, it should be stressed this is England and if you are travelling to and from England and indeed that is your permanent residence, this applies to you.’

Asked directly why no agreement had been struck between the four Home Nations, Mr Shapps replied: ‘We have a devolved system and they have their own governments and it is for them to decide.

Mr Shapps yesterday directed the blame for delays in publishing the list at Ms Sturgeon who had previously said she wanted to weigh up the public health risks of easing the travel restrictions.

Ms Sturgeon hit back at lunchtime today as she claimed the list of countries proposed by the UK Government had been like ‘shifting sands’ in recent days.

She told her daily coronavirus briefing in Edinburgh: ‘We have often had limited or no notice of the UK’s proposals and that matters because some of the judgements involved here are difficult and complex.

‘Just to illustrate the point about the shifting sands of the UK Government’s position, the list of countries that they were yesterday demanding that the Scottish Government signed up to and suggesting that we were a barrier to getting agreement on is not the same as the list that they have shared with us today.

‘So we need as the Scottish Government to analyse these proposals properly and rationally.

She added: ‘When so much is at stake as it is right now, we can’t allow ourselves to be dragged along in the wake of another government’s, to be quite frank about, shambolic decision making process.

‘We will take time to properly and rationally consider this before hopefully very soon setting out our own decision.’

Ms Sturgeon said it is ‘very likely’ that the Scottish Government will agree to lifting quarantine on low risk countries but that medium risk countries would need to be carefully considered.

The Scottish First Minister said she will aim to ‘maximise alignment’ between Scotland and England’s quarantine exemptions lists but that if there are differences people will still be expected to self-isolate north of the border.

‘The quarantine regulations in Scotland will mean that if you come from an international country and come back to Scotland even if you are coming through England, you will still have that requirement to quarantine in Scotland.’

Speaking on BBC Scotland’s Reporting Scotland programme, he said he wants to take a ‘swift’ decision and is ‘all for’ a four-nations approach.

‘That’s why it is so frustrating that the information that the UK wanted us to consider has either been given to us the night before they intend to make an announcement, including last night, or indeed given to us 30 minutes before a meeting with substantial changes, and of course that is no way to get any kind of agreement,’ he said.

‘Scottish ministers are actively considering the public health impact of these proposals, as well as the data and evidence underpinning them. Once they have done that they will announce any changes in relation to Scotland.’

The spokesman added: ‘It is disappointing that the UK Government have chosen to make an announcement on the countries they intend to exempt before a four-nations agreement has been reached.

‘We would still like to reach a four-nations approach if possible but that is difficult when the UK Government change proposals and give us last-minute sight of them.’

Boris Johnson today tried to play down the row between London and Edinburgh as he insisted the four Home Nations are working together to find a way forward.

‘We have had very good conversations with all the devolved administrations about this,’ he told LBC radio.

‘I am sure that everybody will work together to make sure that people’s holiday’s to those countries – and it is a small list of countries where we are going to have the air bridges – can go ahead.

‘There will be large parts of the world, I’m afraid at the moment, where you will have to observe 14 days’ quarantine when you have come in and that is only right.

‘We have made a huge effort in this country to get this virus under control. We cannot have reinfection from abroad.’

Mr Shapps said much of the list was ‘common sense’ – but confirmed there will not be pacts in place for the ‘green’ rated countries, meaning there is no guarantee Britons will not face restrictions upon arrival.

Meanwhile, he said the Government is working with airports to introduce effective screening systems from later this month that could lower the risks of travel spreading infection.

The full list will be released around lunchtime, and the Foreign and Commonwealth Office will rework its advice against ‘non-essential’ travel guidance – starting from July 4.

However, the measures exempting travellers from quarantine will not be in force until July 10.

The majority of passengers will still have to provide contact details when they arrive in England. 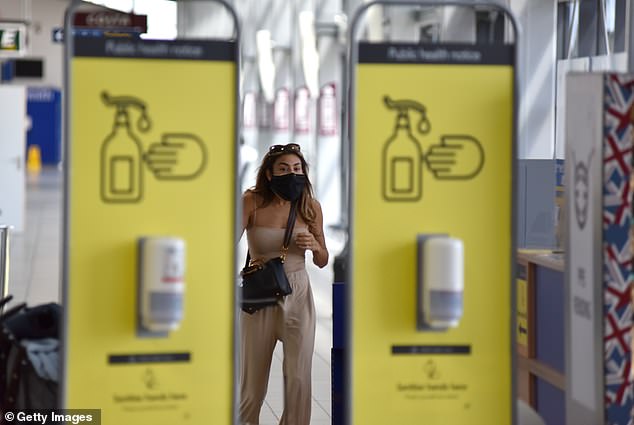 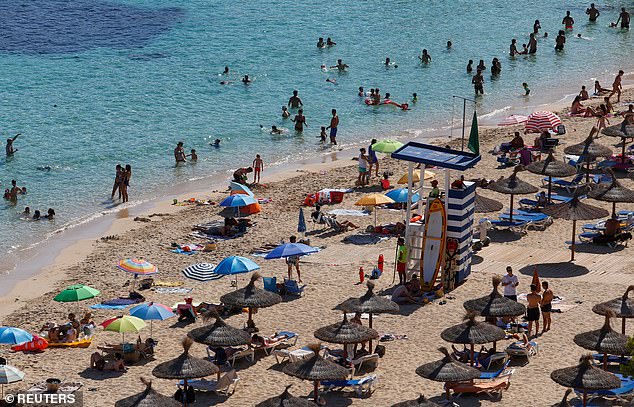 Those who have been through countries still on the quarantine list in the past 14 days will still have to self-isolate for two weeks.

In a round of broadcast interviews this morning, Mr Shapps said: ‘There will be a list of 50-plus countries. If you add in the overseas territories (there will be) 60-something-or-other that will be announced later today.

‘France, Germany, Italy and Spain will be on that list. It is really important that we have done this in a very careful and cautious way. The most important thing is to maintain the gains that we have had.’

‘They would include France, Germany, Spain and quite a number of others.’

Coronavirus: Money back for Ryanair and Sykes customers

Australians on JobSeeker payments urged to ‘strike’ by union

Australians on JobSeeker payments urged to ‘strike’ by union