A veteran New York City sportscaster says his former employer chose not to renew his contract after a bi-racial colleague refused to appear with him on a televised segment about race relations in America because he is white.

Jonas Schwartz, 45, is planning to file a multi-million dollar lawsuit in Manhattan federal court next week accusing the SNY regional sports network of retaliation as well as race discrimination, according to his attorney.

The lawsuit is based on a complaint filed by Schwartz with the Equal Employment Opportunity Commission, a prerequisite before any legal action is initiated.

The complaint alleges that SNY is guilty of ‘race, color and age discrimination and retaliation’ against Schwartz, according to a copy provided to DailyMail.com by his attorney, Kristan Peters-Hamlin. 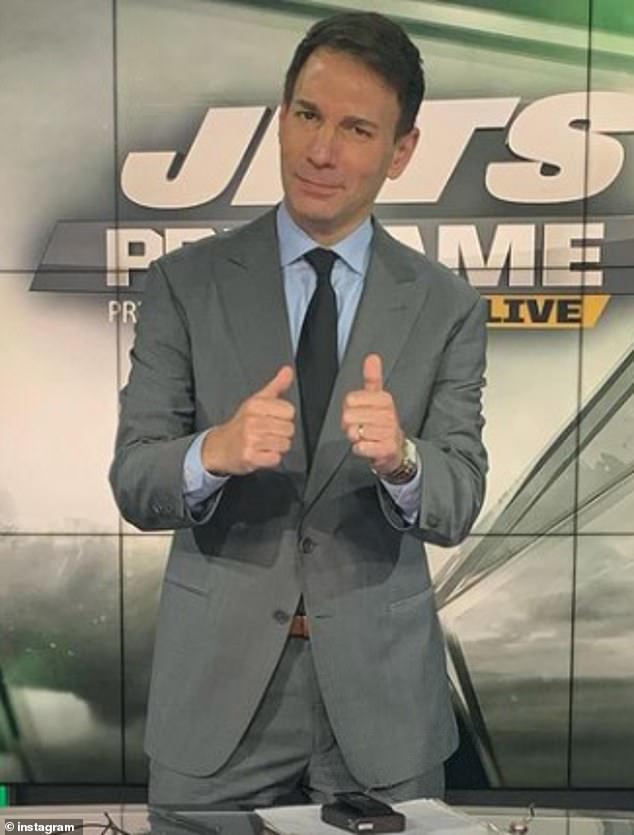 Jonas Schwartz, 45, is planning to file a multi-million dollar lawsuit in Manhattan federal court next week accusing the SNY regional sports network of retaliation as well as race discrimination, according to his attorney 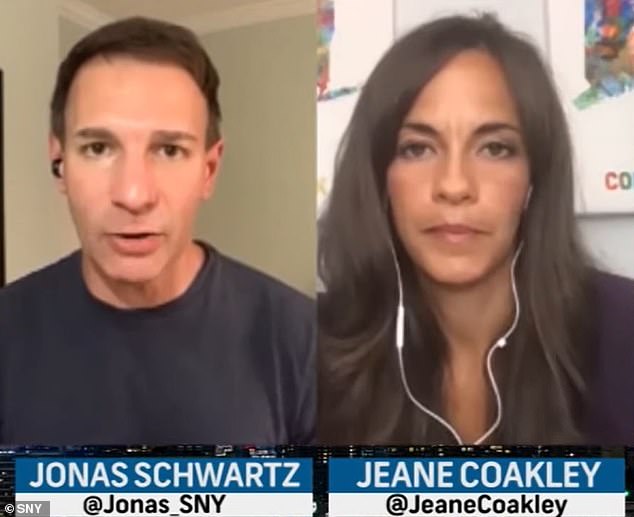 Schwartz alleges that his contract was not renewed by SNY months after he was removed from hosting a segment about the George Floyd protests because a bi-racial co-host, Jeane Coakley (right), did not want to appear with him and another ‘white guy’. Schwartz and Coakley are seen above during a June segment discussing the protests

Schwartz was set to host another segment in August alongside Coakley, SNY analyst and former NFL star Bart Scott (second from right), and SNY reporter Ralph Vacchiano (far right). But when Scott failed to show up for taping, Coakley is alleged to have told SNY executives: ‘No offense, but I don’t want to do this with a couple of white guys. You can’t understand what we are going through. Why are we doing this with white guys?’

On June 5th 2020, Schwartz was asked by SNY to host a two-part digital series on social justice and sports alongside fellow broadcasters Jeane Coakley, Bart Scott, and Ralph Vacchiano.

Coakley is bi-racial, Scott is an African American, and Vacchiano is white.

During that time, the nation was roiled by widespread protests in the wake of the May 25 police-involved death of George Floyd, a 46-year-old black man, in Minneapolis.

The segment was well-received and Schwartz was praised internally for his hosting duties, according to the EEOC complaint.

On August 27, Schwartz was once again set to host a football-themed digital show during which he, Coakley, Scott, and Vachianno were going to discuss NFL players walking out of practice to support social justice.

The show was going to be recorded digitally on Zoom. When the call was set to begin at 1pm, Schwartz, Coakley, and Vachianno were prepared to start recording, but Scott was absent.

According to the EEOC complaint, Coakley grew agitated, asking: ‘Why are we doing this?….We’ve already done a show like this (two months earlier after the George Floyd killing).’ 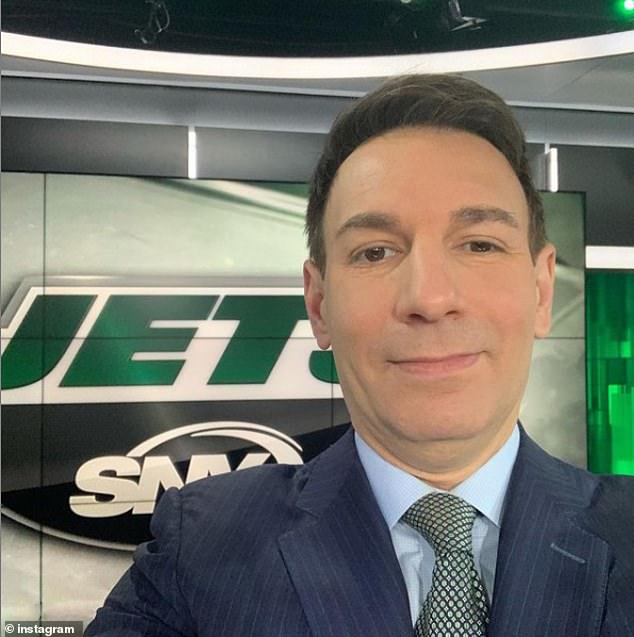 Schwartz alleges that SNY executives agreed with him that he should not have been removed. He was then informed that his position would be eliminated. Schwartz spent 14 years at SNY, including the last five as host of New York Jets pre- and post-game analysis shows

Schwartz’s attorney claims that Coakley ‘went on to say in a loud, pained voice “No offense, but I don’t want to do this with a couple of white guys. You can’t understand what we are going through. Why are we doing this with white guys?”’

Vachianno offered to step aside and Schwartz, though he felt he could add value to the segment, said he would be willing to stand down if his bosses told him to do so, according to the complaint.

Scott then sent a text message indicating that he would not be able to join, so taping was pushed back to 5pm.

Moments later, Schwartz was told that he would not be hosting the segment. Marc Davis, the coordinating producer, is said to have told him to ‘take the week off.’

According to the complaint, Schwartz told Davis that he felt as if he was removed from the segment because of his race.

‘I wouldn’t look at it that way,’ Davis is said to have told Schwartz. ‘You just don’t play the right position for this week’s show.’

Schwartz responded that he understood that ‘position’ in this context meant his race.

Davis was highly complimentary of Schwartz for his performance as host in the June program, according to the complaint. 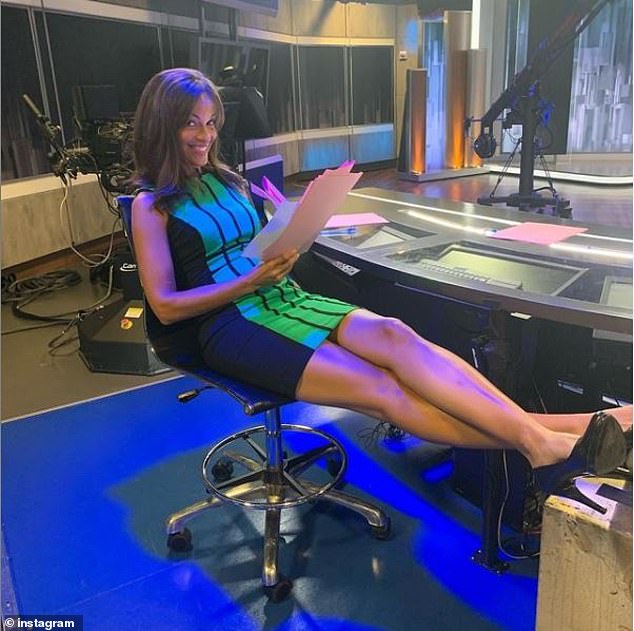 Coakley, a bi-racial woman, is a co-host and reporter at SNY. DailyMail.com has reached out to Coakley for comment

When Schwartz told Davis that his removal from the broadcast could pose a problem with the human resources department, Davis is alleged to have replied: ‘You are probably right.’

DailyMail.com has reached out to both SNY and Coakley seeking comment.

Later that evening, the segment was taped, though the participants were Coakley; Scott; and Jamaal Westerman.

Both Scott and Westerman, who are former NFL football players, are black.

‘Thus, as a result of Coakley’s request that the two “white guys” be removed because of their race, [SNY] indeed did remove the two Caucasian panelists,’ according to the EEOC complaint.

In September, Schwartz met with his bosses who agreed that the situation ‘wasn’t handled correctly’ and that he should not have been pulled, according to the complaint.

A month later, however, Schwartz was informed by his superiors – Curt Gowdy, SNY’s president and executive producer, and Brad Como, the senior vice president of content development – that his contract would not be renewed at end of the year. 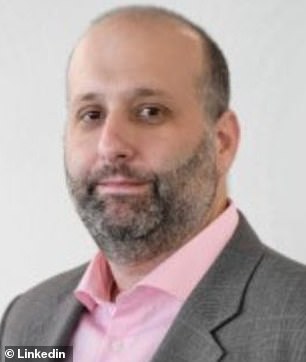 Marc Davis, SNY’s coordinating producer, is alleged to have made the decision to remove Schwartz from hosting duties for the August digital segment about racial justice

Schwartz had been with SNY since 2007, where he hosted highlight shows following New York Mets baseball games as well as studio shows previewing and analyzing New York Jets football contests.

For the past five years, Schwartz has hosted pre- and post-game New York Jets coverage for SNY, for which he has earned glowing reviews from his bosses, according to the complaint.

Como and Gowdy told Schwartz that his position was being eliminated and that ‘this wasn’t performance based,’ according to the complaint.

‘However, that justification was pretextual, because there are still two-and-a-half more years on SNY’s contract with the Jets,’ which requires that a full-time host be employed, according to the complaint.

Schwartz later learned that SNY planned to replace him on Jets broadcasts with ‘a less qualified candidate for the position.’

‘The employer admitted its race-based decision was improper, but then promptly retaliated against Jonas by terminating him for asserting his right to work in an environment free of discrimination,’ Peters-Hamlin told the New York Post.

‘All employees are entitled to be judged based on their merits, and the content of their character, not the color of their skin.’

When a Florida bride’s wedding cake dreams were dashed, Publix gave her a Zoom surprise

Gothic flat where the Spice Girls shot the video for Wannabe goes on sale for £11.5million