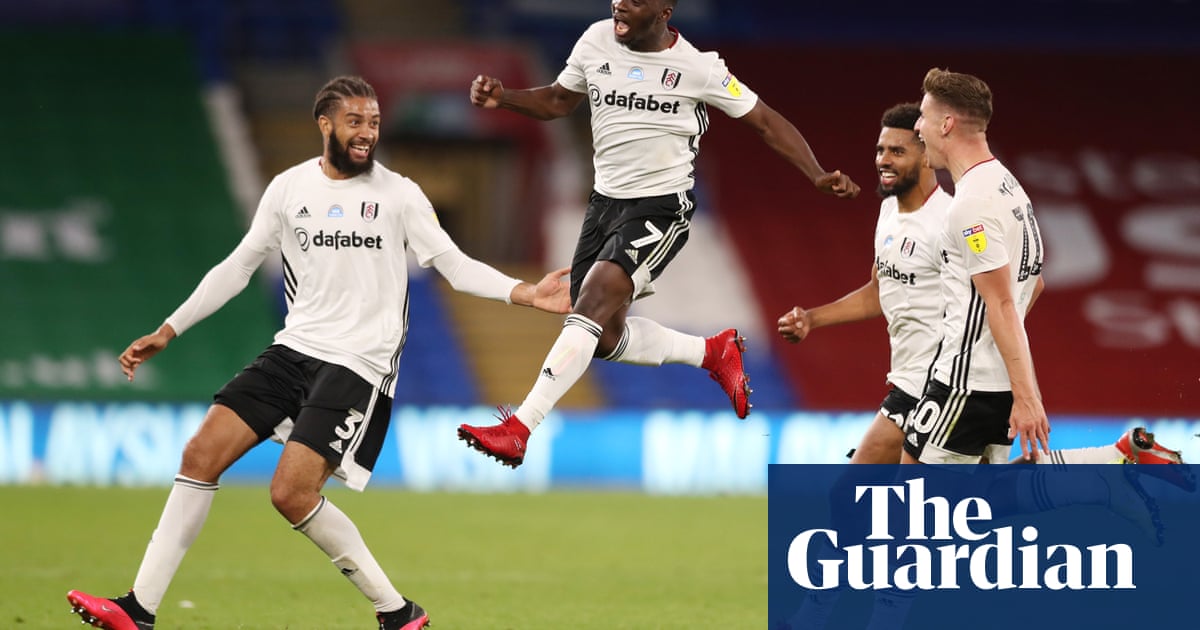 Without their talisman Aleksandar Mitrovic through injury, this had the makings of a tricky evening for Fulham but superb individual goals by Josh Onomah and Neeskens Kebano earned them a two-goal advantage to take back to Craven Cottage and puncture Cardiff’s hopes of reaching the Championship play-off final.

Onomah took matters into his own hands, twisting and turning in the box for a wonderful solo goal four minutes after the break before Kebano sealed victory close to full-time with a delicious free-kick from 20 yards. After an unconvincing start, Scott Parker’s side stamped their authority on the game and sapped belief from Cardiff, who spent the majority of the second half chasing shadows. This result provides a perfect platform for Fulham, who also hope to welcome back Mitrovic for the second leg on Thursday.

Fulham arrived in south Wales with a spring in their step after finishing the regular season unbeaten in seven matches, a run of form which included victory over Cardiff, but any feelgood factor was dented by the absence of Mitrovic, their 26-goal top scorer. Mitrovic missed three matches of that undefeated streak through suspension but Parker said omitting his top scorer was a “calculated decision” with the bigger picture in mind.

Bobby Decordova-Reid, the former Cardiff forward, led the line in Mitrovic’s absence but was painfully isolated by towering centre-backs and struggled to give his former teammates too much to worry about. Cardiff were rarely threatened in a lively first half but Tom Cairney, the Fulham captain, provided a scare on the cusp of the interval when he curled narrowly wide from 25 yards after being invited to shoot. The Cardiff goalkeeper Alex Smithies also superbly smothered Kebano’s looped cross to prevent Onomah converting at the back post.

Cardiff would have headed down the tunnel with a first-half advantage but for an outstanding piece of defending by Michael Hector, who scooped the ball to safety amid pressure from Robert Glatzel, who tried to poke home after Marek Rodak fumbled Leandro Bacuna’s stinging shot. Glatzel had another couple of sightings of goal, first when Lee Tomlin magically worked the ball into Junior Hoilett but the striker shot straight at Smithies. He then attempted to curl in but his weak effort failed to trouble Smithies.

Decordova-Reid may not have got much change out of Sean Morrison or Curtis Nelson but four minutes after the break Onomah certainly did. Harrison Reed, the Southampton loanee, slipped in Onomah on the edge of the box with seemingly little danger but he proceeded to turn three Cardiff players inside-out before tucking the ball beyond Smithies. He swivelled away from Marlon Pack, turned Morrison and then jinked inside Nelson before applying the finishing touch. Decordova-Reid smacked over as Fulham searched for a second while they slowly passed Cardiff to death.

Neil Harris, the Cardiff manager, recognised his players were flagging as Fulham starved them of possession and replaced his three-pronged attack by introducing Danny Ward – who scored off the bench in victory over Hull last week – Josh Murphy and Will Vaulks. Tomlin’s influence also waned. Fulham were comfortable but that did not stop Parker edging out of his technical area to urge calm among his players, namely Onomah.

Cardiff flung the ball from long throws and a floated crosses, with Morrison sneaking in towards the penalty spot unchallenged late on but Fulham doubled their advantage when Kebano’s crisp free-kick flew into the top corner. Kebano ran to celebrate with Parker, as Onomah did after the opener, and the celebrations suggested it was a priceless goal in their quest for promotion.

RICHARD LITTLEJOHN: Everybody back on the plane! Summer’s just been cancelled

Covid-19 Is Far From Over, But In These 8 Portraits, Life Goes On