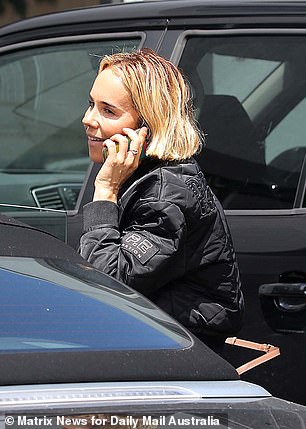 P.E Nation founder Pip Edwards emerges after leaked emails revealed her publicist had refused to sign off on a portrait for entry to the Archibald Prize as it made her look ‘old’

Pip Edwards’ camp has broken its silence after leaked emails revealed how the P.E Nation founder’s staff refused to sign off on an Archibald Prize entry portrait because it made her look ‘old’.

Edwards – who was spotted in Sydney on Thursday with a phone glued to her ear – entrusted her besieged spokeswoman Louise Gaffikin to issue a statement about the controversy.

Ms Gaffikin said the high profile fashion designer ‘appreciates the artist’s take’ on the portrait and noted that art is by its nature ‘subjective.’

It comes after ‘heartbroken’ Melbourne artist Lauren Ferrier, 25, revealed one of her initial sketches of the high-profile fashion designer.

Edwards, cricket legend Michael Clarke’s new lover, flew down to Melbourne in September 2019 especially for a sitting. She posted an excited message about the artwork to Instagram at the time.

But almost a year later, her top aide Ms Gaffikin refused to have Edwards sign off on the finished product – as it didn’t ‘align’ with the high-profile designer’s image and made her look ‘older beyond her years’, leaked emails revealed. 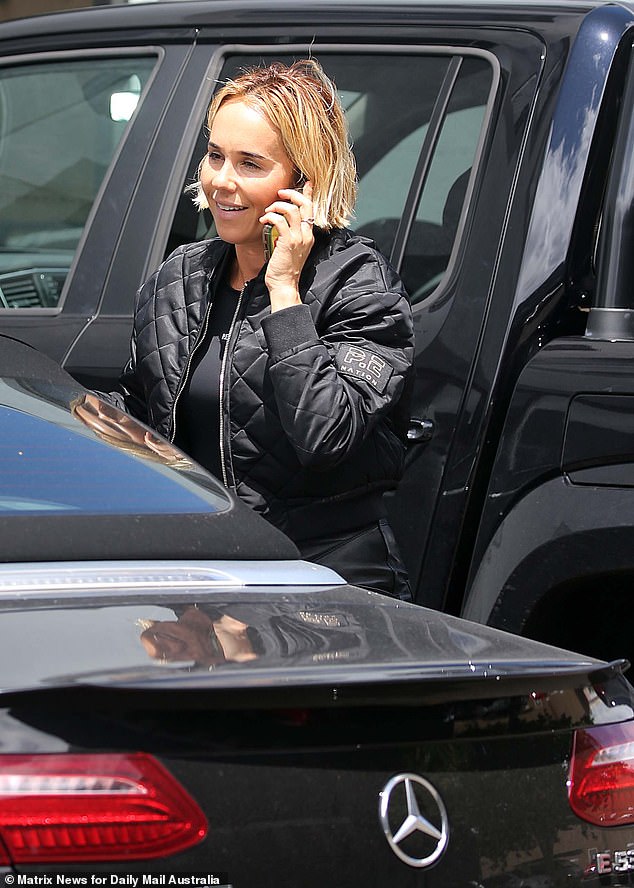 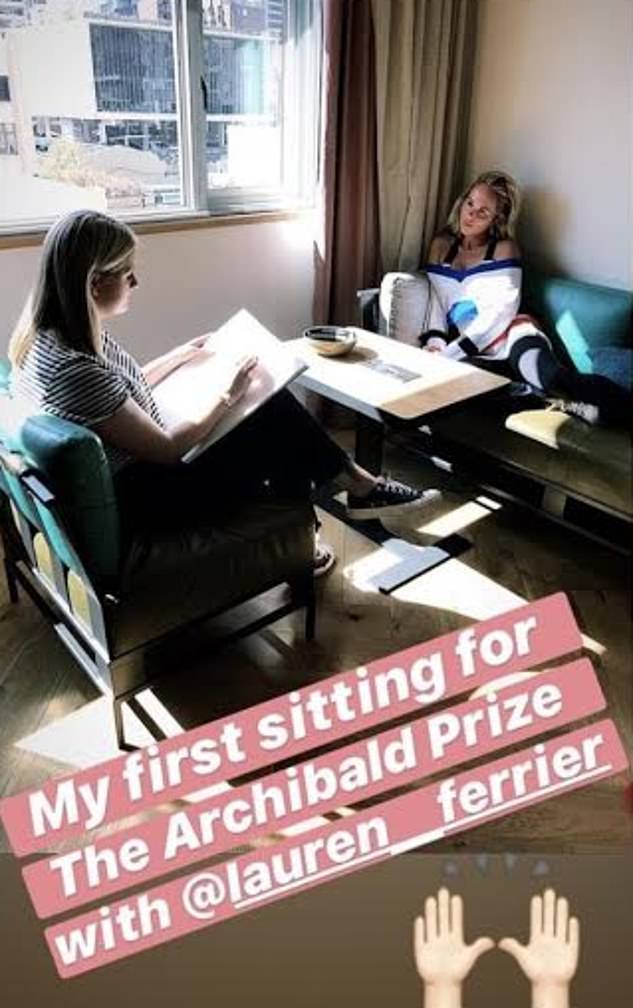 In late 2019, the P.E Nation founder sat with artist Lauren Ferrier to have her portrait taken for consideration in the 2020 Archibald Prize. Above, Edwards’ excited Instagram post 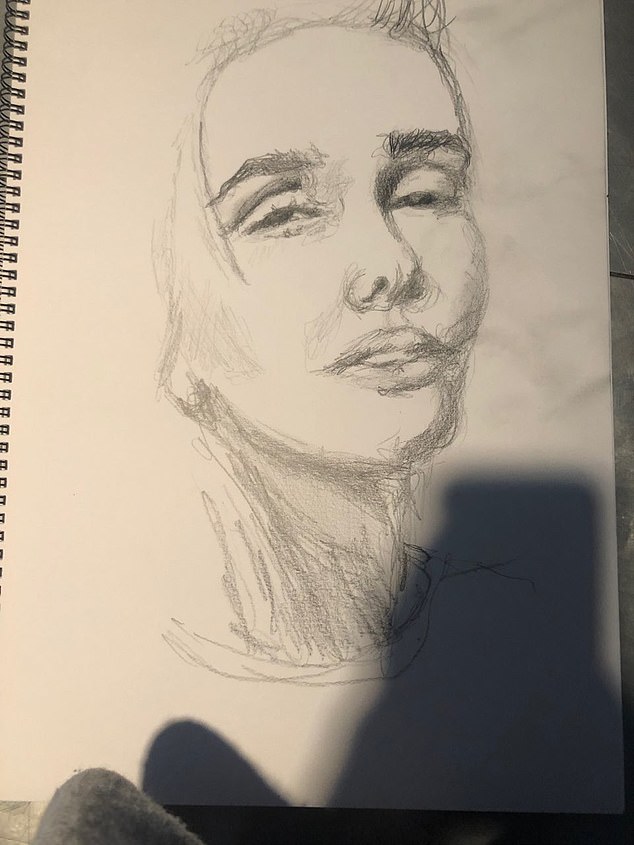 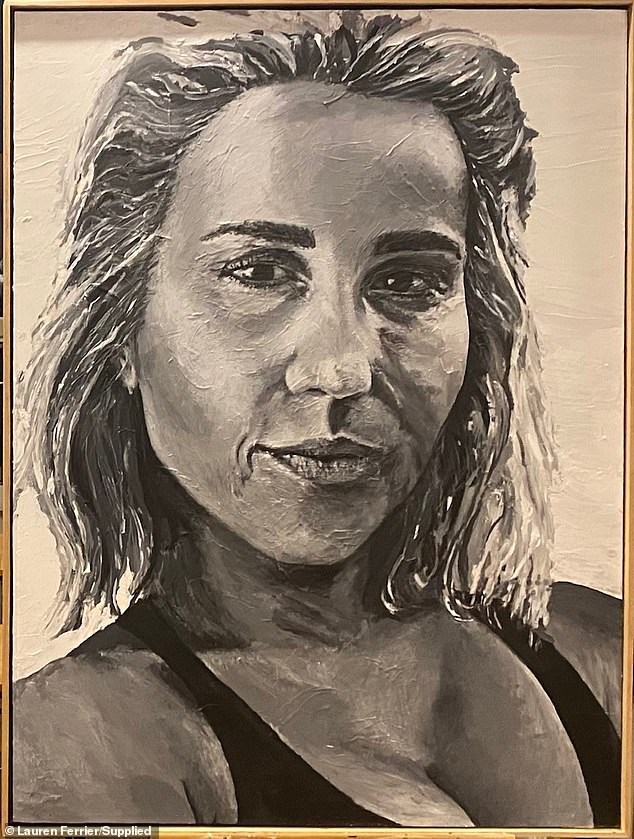 Ms Gaffikin issued a statement to media on Thursday, saying: ‘Pip is a creative individual. She has a wealth of ideas, thoughts and openness.

‘There is always room for wide interpretation and personal subjectiveness when it comes to artistic expression and it is often subjective.

‘She appreciates the artist’s take on her, hence why the portrait was submitted for consideration.’

But the portrait didn’t get submitted without drama.

In July this year, Ms Ferrier was in for a rude shock when she emailed the designer and Ms Gaffikin to ask for a signature on her Archibald entry form.

‘I don’t think she could resonate with this painting and having it being put out to the public.’
P.E Nation global head of public relations, Louise Gaffikin, in an email

The signature was to confirm they had met, as per the Archibald’s conditions of entry.

The artist had forgotten to bring the form to their initial meeting.

Ms Gaffikin replied to Ms Ferrier on July 27 asking her to share an image of the portrait itself.

After Ms Ferrier sent a picture through, the publicist replied again on July 30, thanking her for her work – before going on to suggest the portrait wasn’t right.

According to the correspondence, Ms Gaffikin wrote: ‘I am sure you have been working hard on getting this together.

‘Which makes this email so hard to send, however to be transparent and honest, we won’t be able to sign the consent form for the image to be put forward,’ she said.

‘Having worked so closely with Pip over the past 3 years, I just know she will not align with the imagery, I have to be honest and say she looks much older beyond her years in this photo.

‘I don’t think she could resonate with this painting and having it being put out to the public.’

The emails said Ms Gaffikin then went on to ask for a ‘solution’ – suggesting a portrait where Edwards looked younger.

She also requested the artist delete an existing picture of the portrait from her Instagram page. 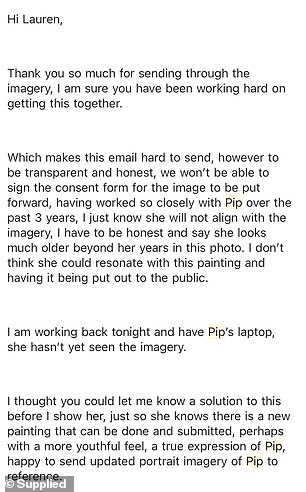 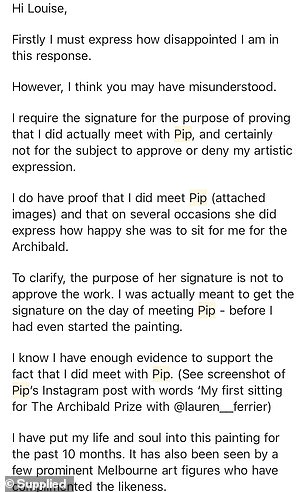 On left is the email Ms Ferrier alleges was sent to her by Pip Edwards’ publicist Louise Gaffikin at the end of July, after she sought a signature on a form confirming they had met in person. On right is Ms Ferrier’s reply 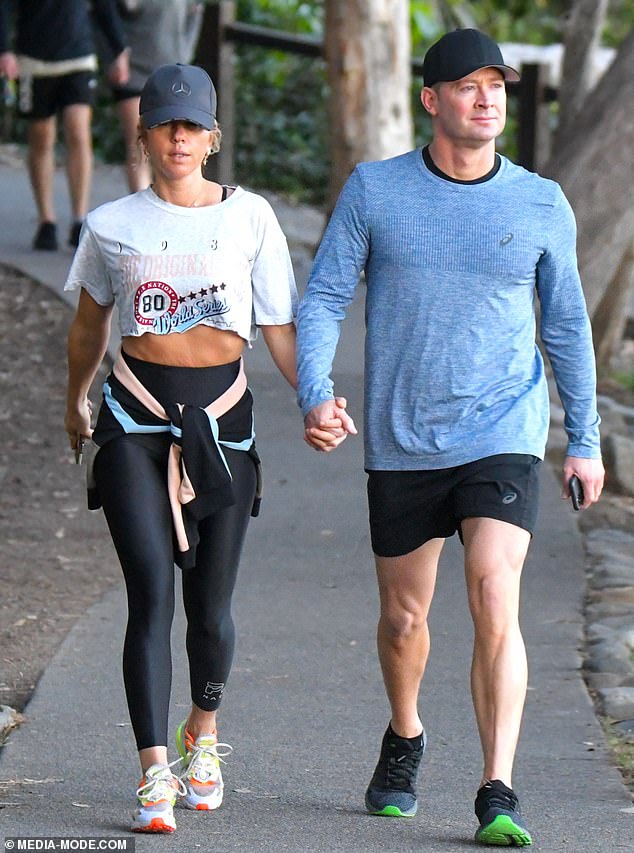 Power couple: Edwards is seen above with her partner, cricket legend Michael Clarke, at Noosa earlier this year

Ms Gaffikin said such a solution would be ‘just so she (Edwards) knows there is a new painting that can be done and submitted, perhaps with a more youthful feel, a true expression of Pip.

‘Happy to send updated portrait imagery of Pip for reference,’ she wrote.

Ms Ferrier said she was ‘heartbroken’ by the reply.

She told Ms Gaffikin she was very disappointed with the response, and clarified that she didn’t need Edwards ‘approval’ to submit the painting.

The signature was simply to prove they had met, as per the competition’s conditions, she said. Edwards eventually acquiesced and signed the form.

But there was yet another twist to come. A few weeks ago, Ms Ferrier posted to her Instagram story that the portrait was for sale. 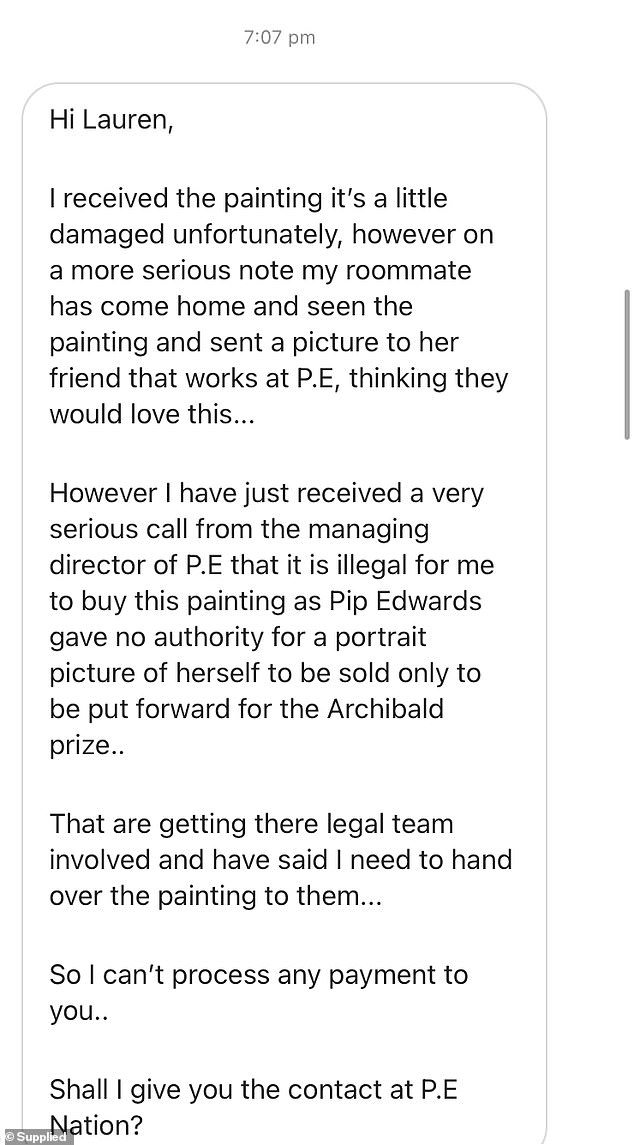 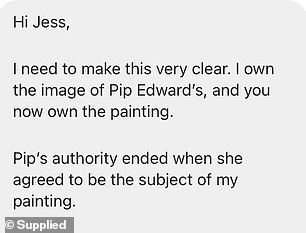 Part of Ms Ferrier’s reply. She goes on to warn the purchaser she will approach the media if she does not pay

A woman contacted Ms Ferrier and signalled her interest in buying it.

‘My friend just me this as she knows how much I love Pip,’ the prospective buyer said.

‘How much are you selling it for?’

They negotiated a price – $400 – and Ms Ferrier sent it off in the post while awaiting her payment.

However, screenshots show the woman then claimed to Ms Ferrier that she had received a call from P.E Nation, warning her that Edwards had not signed off on her picture being sold and therefore she ‘couldn’t process the payment.’

Outraged Ms Ferrier demanded payment and warned she would get the media involved.

‘Pip’s authority ended when she agreed to be the subject of the painting,’ the artist told the buyer.

The purchaser replied that Ms Gaffikin was her roommate’s friend and later added that she had a ‘really nice chat with PE’.

She said Edwards was now ‘comforted that the painting has been sold to someone loyal and who genuinely loves the brand.

‘They were concerned someone may purchase and then try and on sell to make money on the painting and not end up in good hands.

‘They now no (sic) I have no intention of doing this and plan on keeping (it)’. 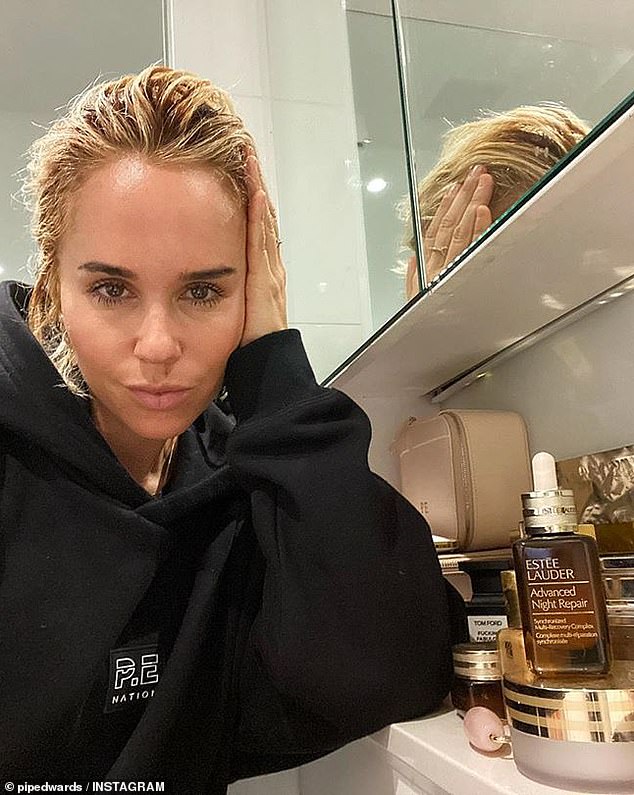 In an interview, Ms Ferrier told Daily Mail Australia she had worked for months on the portrait.

She said she didn’t hear from Edwards again after sending her the finished product and understood if she didn’t like it.

‘It’s fine she didn’t like it. It was just my own expression,’ she said.

Rather it was that Team Edwards’ move would’ve stopped her entering the competition, ‘when I tried to put months and months of work into it’ that upset her most.

In her statement, Ms Gaffikin said: ‘The sale of the portrait was questioned, not its entrance into the Archibald.

‘The artist advised she had full legal ownership rights and the painting was sold.’

And there, it apparently remains.

One of the best people to make a judgment on the painting – and the controversy – is John McDonald.

He is one of the nation’s best known art critics, boasting 30 years’ experience and a regular column in The Sydney Morning Herald.

In an interview with Daily Mail Australia, Mr McDonald had some constructive criticism of Ms Ferrier’s piece – and for Team Edwards’ approach to the painting.

Mr McDonald said if Edwards was ‘fussy about how she looks’ she should have carefully vetted the artist’s previous work. 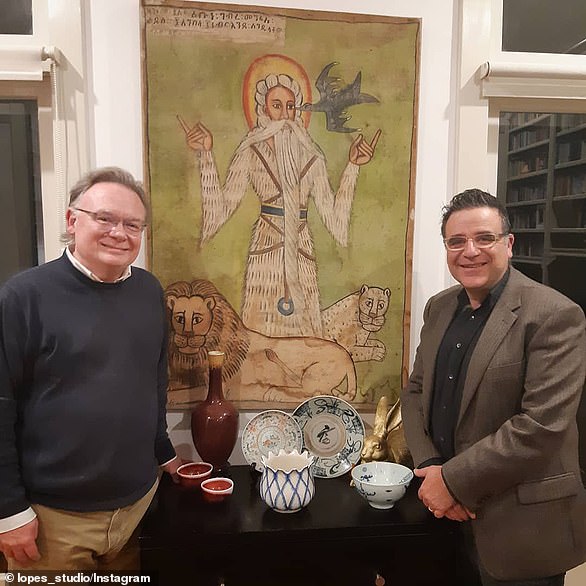 ‘Every second portrait I think that’s done, the subject of a portrait doesn’t like it or thinks it makes them look too old or too ugly.

‘If she didn’t want a portrait out there she didn’t approve of she should have carefully vetted the artist.’

Mr McDonald said portraits are frozen images of subjects, and come from a more objective position than people see themselves.

‘Naturally people find their vanity offended by that,’ he said, adding there were many famous instances.

‘Graham Sutherland painted a picture of Winston Churchill and Churchill complained, he said (according to legend) it makes me look like I’m sitting on the toilet. And when Churchill died his wife burned the picture!’ 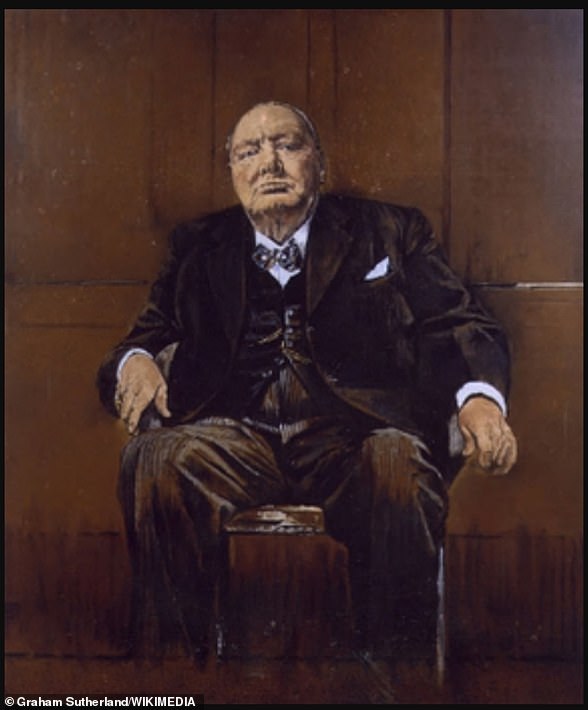 According to legend, Winston Churchill’s wife destroyed had this portrait of the British prime minister after his death (a reproduction is above)

Of the Edwards portrait itself, Mr McDonald said: ‘I think the portraitist has done as good a job as they can.

The critic said the painting’s limits were the limits of the artist.

Asked what specific criticisms he had, Mr McDonald said that he felt it had a ‘stiff feel about it’, adding it looked like as if it was painted from a photograph.

Mr McDonald – once the subject of an Archibald entry himself – said most artists meet up with a subject as is required by the prestigious competition’s rules, do a quick sketch, take photos and work it up from there.

(Ms Ferrier confirmed she took some sketches of Edwards when she met her, and then worked up the final piece from photos).

Mr McDonald also noted the portrait was painted in black and white and didn’t attempt to ‘do anything colourful in terms of skin tone and eyes’.

Overall, he said: ‘It’s very hard for (Edwards) to really make a judgment on something like this.

But it is now.

TOM UTLEY: A storm in a teacup over tea. Wags in £1m legal war. Why I’m tickled by trivia’s return

Mayan community was obliterated 1,590 years ago when volcano erupted