Police dramatically boarded a Ryanair flight from Liverpool after reports of a ‘blood splattering altercation’ mid-air forced the plane to divert off its route to Lisbon.

Ryanair flight FR4346 departed Liverpool Airport at 6.29am on Friday and was due to land just a few hours later at Tenerife South Airport at 10.40am.

However, the flight was diverted to Lisbon after a passenger became disruptive during the flight. 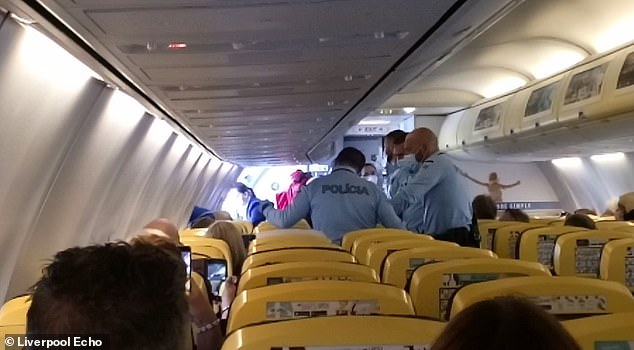 Plane trackers show how the Ryanair jet made a sharp right turn while flying over the Atlantic Ocean to land in Lisbon at 9.36am.

Ryanair confirmed the passenger was removed by police before the flight continued to the Canary Island, Liverpool Echo reports.

However, they declined to comment on further details of the incident.

A spokesperson for the budget airline said: ‘This flight from Liverpool to Tenerife (October 16) diverted to Lisbon after a passenger became disruptive inflight.

‘The aircraft landed normally and the passenger was removed by police upon arrival before the aircraft continued to Tenerife.’

Liverpool John Lennon Airport and Lisbon Police did not respond to requests to comment. 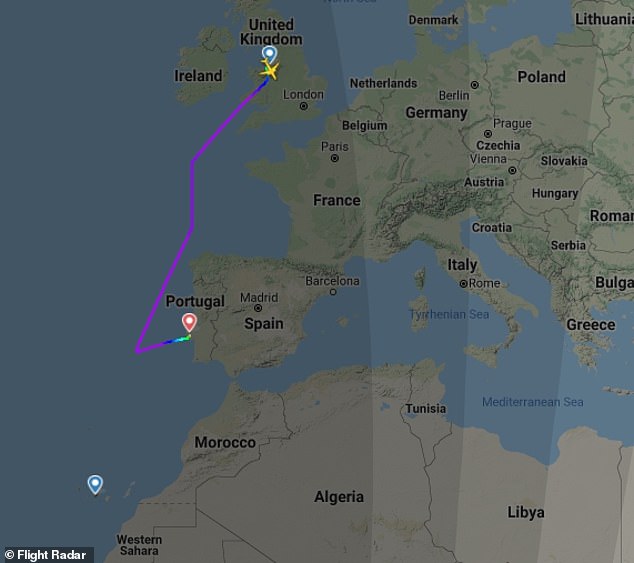 A passenger, who was on the diverted flight, revealed how passengers cheered when the disruptive man was removed by local police.

The man, who wished to remain anonymous, added that things ‘quietened down’ before an altercation ensued.

As the plane landed in Lisbon, the passenger said the aircraft door was opened and around five Portuguese police came on board.

He added: ‘Passengers cheered as he left the aircraft [and] someone shouted ‘you’re not so brave now then are you’…

‘The stewards were fantastic and calmly managed the situation, all thanks to them.’

Anthony Ainsworth from Tuebrook was on the return flight as a member of the same cabin crew spoke to customers about the dramatic inbound flight. 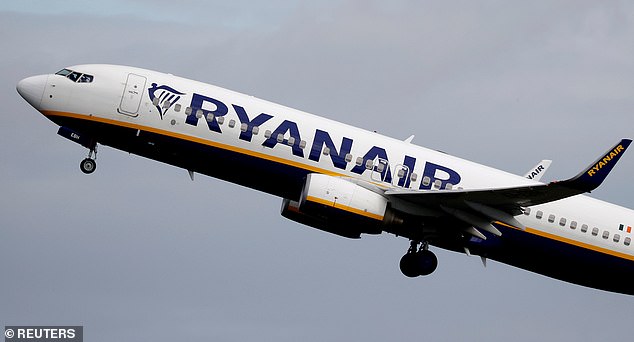 He said: ‘One of the cabin crew began speaking to one of the customers on the flight…

‘[The air steward said] he then became erratic and there was an altercation and a lot of blood splattered.

‘They calmed the situation down and strapped him at the front where he fell asleep.

‘They then had to land the plane in Portugal.’

Anthony added that on his return flight, a member of the cabin staff had blood on their shirt.

Ryanair said local police are now dealing with the incident.

‘When will you resign, then?’ UN Secretary General sparks anger with ‘patriarchy’ tweet