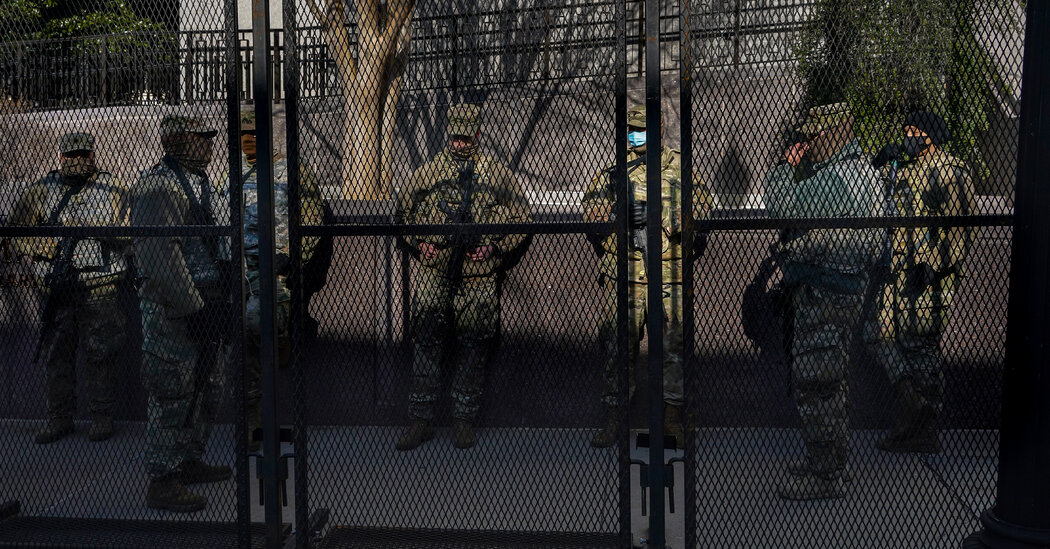 WASHINGTON — The Pentagon is intensifying efforts to identify and combat white supremacy and other far-right extremism in its ranks as federal investigators seek to determine how many military personnel and veterans joined the violent assault on the Capitol.

In the days since a pro-Trump mob breached the Capitol on Jan. 6, senior leaders of the 2.1 million active-duty and reserve troops have been grappling with fears that former or current service members will be found among the horde.

The F.B.I. investigation into the Capitol siege, still in its very early stages, has identified at least three suspects with military links out of the more than 100 people who have been taken into federal custody or the larger number still under investigation. They are a retired Air Force lieutenant colonel from Texas, an Army officer from North Carolina and an Army reservist from New Jersey. A fourth person with military service was shot and killed in the assault.

The military’s examination of its ranks marks a new urgency for the Pentagon, which has a history of downplaying the rise of white nationalism and right-wing activism, even as Germany and other countries are finding a deep strain embedded in their armed forces.

“These people are not representative our country’s military,” Gen. Mark A. Milley, the chairman of the Joint Chiefs of Staff, said in an interview. He said most active-duty troops and veterans “continue to serve honorably and uphold their oath to protect and defend the U.S. Constitution.”

For more than a week now, General Milley has listened to analysts, read reports and viewed videos of the riots. “There was some indication that an unknown number of veterans associated with the insurrection,” he said.

Federal officials are vetting thousands of National Guard troops arriving to help secure the inauguration. Of the 21,500 Guard personnel who had arrived in Washington by Monday, any who will be near President-elect Joseph R. Biden Jr. and Vice President-elect Kamala Harris will receive additional background checks, a standard procedure to counter insider threats that was also taken before President Trump’s inauguration in 2017.

Defense Department officials say they are looking into stepping up the monitoring of social media postings from service members, in much the way companies do with their employees.

Ashli Babbitt, who was shot and killed trying to climb through a door in the Capitol, was an Air Force veteran with a robust social media presence. Federal agents say that Timothy Hale-Cusanelli, another protester at the Capitol, is a neo-Nazi and white supremacist; he also is an Army reservist who works — with secret clearance — at a naval weapons station.

Capt. Emily Rainey, an Army officer who told The Associated Press that she had transported 100 people to Washington for the Trump rally, is being investigated by the Army for any connection to the riots, according to a military official. Captain Rainey had resigned from her post last year but was not set to leave until this spring.

General Milley said he saw reports that “people were showing their C.A.C. cards,” a reference to the identification cards used to enter military installations and the Pentagon.

Last Tuesday, General Milley and the rest of the Joint Chiefs of Staff sent an extraordinary letter to all military personnel, reminding them that Mr. Biden would soon be their commander in chief and that they were duty bound to defend the Constitution.

The Defense Department inspector general announced an investigation last week into the effectiveness of Pentagon policies and procedures that prohibited service members from advocacy of or participation in supremacist or extremist groups.

The reckoning at the Pentagon comes as retired Gen. Lloyd J. Austin III is poised to become the nation’s first Black defense secretary, an ascension that, depending on how General Austin decides to proceed, could either sharpen or blur the American military’s decades-long battles with racial inequality and white supremacy.

In his 41-year career in the Army before retiring as a four-star general in 2016, General Austin witnessed firsthand both the possibilities and the limitations of how the military deals with race. As an Army officer, he has told of how he had to confront troops with Nazi insignia at Fort Bragg, N.C., and of countless meetings when he was the only person of color in the room. Now, if he is confirmed as defense secretary, he will have to decide if he will confront the far-right politics that have heightened during four years under Mr. Trump.

“This needs to be rooted out of our military,” Senator Tammy Duckworth, Democrat of Illinois and an Iraq war veteran, said in an interview last week. General Austin, she said, “will be in a unique position to head up that effort.”

General Austin’s confirmation hearings begin on Tuesday, and lawmakers will most likely press him on how he plans to tackle extremism in the ranks.

Last year, the F.B.I. notified the Defense Department that it had opened criminal investigations involving 143 current or former service members. Of those, 68 were related to domestic extremism cases, according to a senior Pentagon official. The “vast majority” involved retired military personnel, many with unfavorable discharge records, the official said.

Joseph R. Biden Jr. will become president of the United States at noon on Jan. 20 in a scaled-back inauguration ceremony. While key elements will remain traditional, many events will be downsized and “reimagined” to better adapt the celebration to a nation battling the coronavirus. Mr. Biden will be sworn in by Chief Justice John G. Roberts Jr. on the Capitol’s West Front sometime before noon. The new president is then expected give his inaugural address and conduct a review of military troops, as is tradition. But instead of a traditional parade before cheering spectators along Pennsylvania Avenue as the new president, vice president and their families make their way to the White House over a mile away, there will be an official escort with representatives from every branch of the military for one city block.

President Trump announced Friday that he would not attend Mr. Biden’s inauguration. Mr. Biden called that decision “one of the few things he and I have ever agreed on. Still, it is a major break with tradition for a president to skip the ceremonial heart of the country’s democracy: the peaceful transfer of power.

George W. Bush, has confirmed he would travel to Washington for Inauguration Day, along with Laura Bush, the former first lady. Barack Obama and Bill Clinton are also expected to attend, along with former first ladies Michelle Obama and Hillary Clinton. This year, tickets are not available to members of the public. Planners are urging people to stay home and participate in virtual inaugural events to prevent large crowds that could easily spread the coronavirus. Events will be live streamed by the Presidential Inaugural Committee and by The New York Times.

The 20th Amendment to the Constitution requires that the term of each elected president and vice president begin at noon Jan. 20 of the year after the election. Every president has taken the oath of office, and they cannot assume their positions without doing so. Symbolically, it marks the peaceful transfer of power from the current president to the next. Inauguration Day will be all the more important this year, as Mr. Biden ascends to the presidency at a time when political division has threatened the nation’s democratic institutions and his predecessor has gone to extreme lengths to stay in power.

“We in the Department of Defense are doing everything we can to eliminate extremism,” Garry Reid, the Pentagon’s director for defense intelligence, told reporters last week. Mr. Reid, however, was unable to outline specifics and declined to address any aspect of active duty members’ participation at the Capitol.

Rising concerns about right-wing activism in the armed forces are not concentrated only in the United States. In Germany, security services counted more than 1,400 cases of suspected far-right extremism among soldiers, police officers and intelligence agents in the three years ending in March, according to a government report released in the fall.

The United States military, unlike police departments and other law enforcement groups, has the ability to use extremist beliefs to disqualify those seeking to join. But, critics note, it has repeatedly failed to broadly apply those mandates.

“The military has unique abilities to set boundaries on conduct that other parts of government don’t have,” said Katrina Mulligan, the managing director of national security and international policy at the Center for American Progress, a liberal think tank. “But they have been unevenly applied.”

Military officials and independent specialists say General Austin will face a daunting challenge. Pentagon officials concede that despite the checks in place, white supremacist and other far-right groups actively recruit service members or have their own members try to join the military to learn skills and expertise, which also lends legitimacy to their cause.

All military personnel, including those in the National Guard, undergo extensive background investigations and physical examinations including assessments of tattoos. Troops are continuously monitored for indications that they are involved in extremist activity and receive training to identify others around them who could be “insider threats.”

“Current regulations have penalties that are largely left up to commanders, often at the unit level,” Heidi Beirich, a co-founder of the Global Project Against Hate and Extremism, told a House hearing last February. “There appears to be no process to track people expelled for ties to white supremacists’ groups.”

At the same time, there are many internal cultural issues within the military — from the recruitment process to training and beyond — that may take years to unravel.

The recently approved National Defense Authorization Act for fiscal 2021, which sets annual Pentagon policy and spending priorities, contained measures meant to help the department address the issue, including a new position in the Defense Department inspector general’s office: a deputy inspector general for diversity and inclusion and supremacist, extremism and criminal gang activity. Congress also charged the inspector general with establishing a “mechanism to track and report” extremist or gang activity in the military.

What WAS it like to live at Party Palace? As its owner sells up, he relives its raucous glory days

Britain beyond lockdown: what we learned from two weeks on the road

Trump’s Illness Makes It Clear: This Election Was Always About the Virus

Eddie Murphy And Arsenio Hall’s Coming To America Characters: Who Plays Each Role

Willian admitted that he never wanted to leave Chelsea, but they refused to offer him what he wanted

The timeline of Melissa Caddick’s alleged frauds and disappearance