President Rodrigo Duterte volunteered himself as a guinea pig for Russia‘s coronavirus vaccine as he struck a deal that will see the Philippines get the jab for free – but before it has passed full clinical trials.

That will mean the country – which has southeast Asia’s highest coronavirus case total at 136,638 – will effectively be used as a giant testing ground for the jab.

‘When the vaccine arrives, I will have myself injected in public. Experiment on me first, that’s fine with me,’ Duterte said as he announced the deal on Monday night. 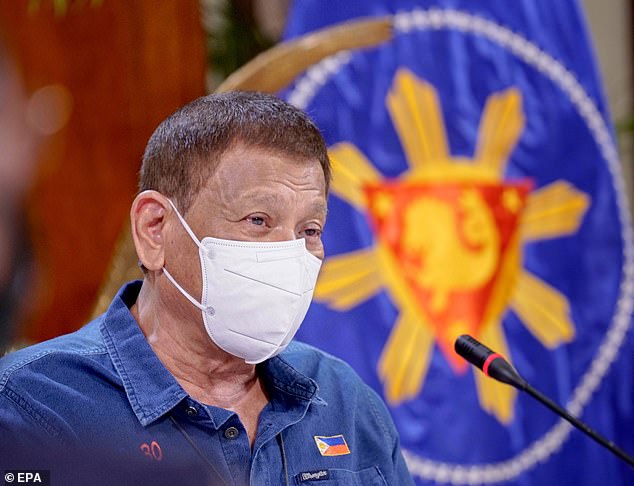 Philippines President Rodrigo Duterte volunteered himself as a test case for Russia’s coronavirus vaccine, after he struck a deal to get millions of doses for free – before the jab has passed full clinical trials

Infections are spreading rapidly in the Philippines, with a record jump of 6,958 cases announced on Monday.

‘I will tell President (Vladimir) Putin that I have huge trust in your studies in combating COVID and I believe that the vaccine that you have produced is really good for humanity,’ Duterte said on television late on Monday.

The frenetic global race to develop a COVID-19 vaccine has raised concern that speed and national prestige could compromise safety.

To allay public fears, Duterte offered to be a guinea pig when the vaccine arrives and said: ‘I can be the first they can experiment on.’

His office on Tuesday said the Philippines stands ready to work with Russia on vaccine trials, supply and mass production. 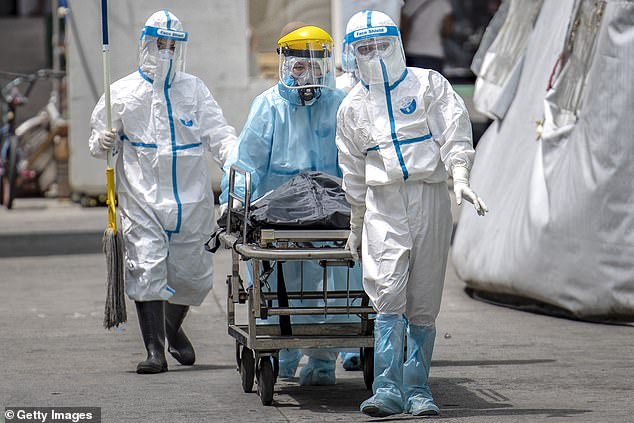 The Philippines has recorded 136,638, the highest total in southeast Asia, and the infection is spreading fast – with a record jump of 6,958 cases on Monday (file image)

In July, Duterte made a plea to his Chinese counterpart to make the Philippines a priority if it develops a vaccine, amid concern in developing countries about availability.

He this month restored a strict lockdown in and around the capital Manila for an initial two weeks, heeding the plea of medical frontliners for a ‘timeout’ amid a surge in infections during a period when restrictions were eased.

If the situation becomes a ‘runaway contagion’, Duterte on Monday vowed to mobilise the military to enforce the lockdown.

The lockdown has been among the world’s toughest and Duterte’s opponents and rights groups have voiced concern about his security-centred approach and the conduct of police.

The socialites showing off their precious pampered pooches on Instagram

Mum whose son, 4, was killed by his own father in a murder-suicide pays tribute to her boy’

Online gamblers should prove they can afford losses, report finds

Twist after baby was killed when runaway pram rolled into traffic

CHRISTOPHER STEVENS: Q. What’s better than a road trip with TV’s Chasers? A. Anything!

Texas doctor, 48, is fired and charged for ‘stealing a vial of the Moderna COVID-19 vaccine’