German police are investigating the mysterious disappearance of a wooden sculpture of a penis that has entertained hikers in the Bavarian Alps for years.

The artwork is thought to have vanished from the slopes of the Gruenten mountain last week, leaving only a stump and some shavings of wood.

‘We have opened an investigation into the disappearance of the piece,’ Bavarian police spokesman Holger Stabik said on Tuesday.

Police are unsure whether a criminal offence has been committed, Stabik said – not least because it remains unknown who created the giant penis or put it there in the first place. 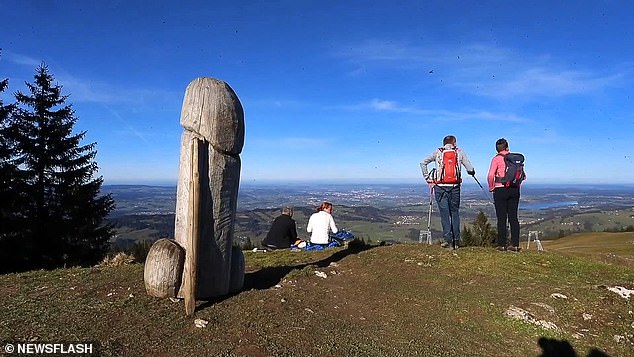 Missing: This 6ft sculpture of a penis, a popular tourist attraction in the Bavarian Alps, has mysteriously disappeared from the mountainside

‘This might not be our leading hypothesis, but it could be the owner who sawed it off to get it back,’ Stabik said.

The giant phallus had stood nearly six feet tall in the Alpine village of Rettenberg.

‘Someone must have sawn it off during the night,’ a local woman told the local Allgaeuer Zeitung newspaper.

The sculpture already made headlines in Germany a few weeks ago when it had to be ‘re-erected’ after being knocked from its pedestal.

The mayor of Rettenberg said it was a ‘great pity’ to lose an unusual ‘cultural monument’ that had helped make the region so popular.

The artwork is also described as a ‘cultural monument’ on Google Maps.

Facebook and Google will be hit with FOUR more antitrust lawsuits’

Tim Robbins, 62, files for divorce from his much younger ‘secret wife’ Gratiela Brancusi