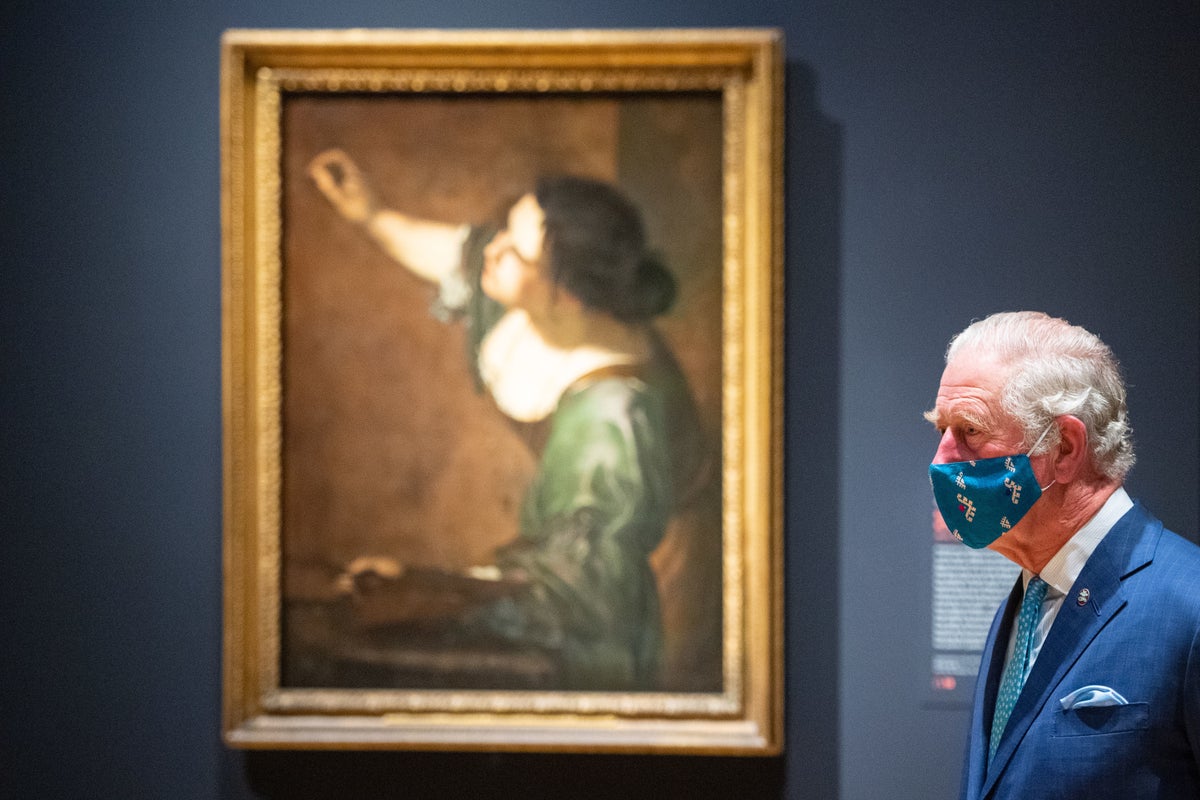 Art fan Charles paused for several minutes in front of Artemisia’s Judith and Holofernes, which depicts a Biblical story of two women beheading a man with a sword.

The prince also took an interest in Artemisia’s Susanna and the Elders which shows a virtuous woman being leered over by two old men.

And let out a laugh when he was shown a painting of Artemisia’s hand.

They were given the tour by National Gallery Director Dr Gabriele Finaldi and shared the space with dozens of tourists milling around.

Dr Finaldi said: “The Prince of Wales knew about Artemisia and has seen some of her paintings before. But he was really struck by the sheer power and drama of some of the paintings.

“He was struck by how extraordinarily involved Artemisia was in her subjects.”

The Duchess of Cornwall, in a blue dress, was quicker around the exhibition and at one stage returned to Charles and said: ”We are a bit behind.”

But she did pause in front of the words “I Will Show Your Illustrious Lordship What a Woman Can Do!” in huge letters on the wall – taken from Artemisia’s letter to a man in 1649.

Letizia Treves, curator, said: “The Duchess was really taken by it and seemed struck by the words.”

After the 45-minute tour, Dr Finaldi added: “We are really pleased we have opened as soon as we possibly could.

“It’s all about ensuring the paintings are there for people to enjoy after a difficult year for everyone.

“We are delighted to welcome our patron the Prince of Wales and the Duchess of Cornwall for coming in and confirming how important this reopening is for everyone.”

They were joined on the tour by Lady Sarah Chatto.

The central London gallery is hosting the UK’s first major monographic exhibition of the work of Artemisia Gentileschi, which first opened in October shortly before lockdown.

The 17th century celebrated female Italian painter turned the horrors of her own life – including repression, injustice, and rape – into brutal biblical paintings that were a war cry for oppressed women.

Many of her paintings are bloody and violent, including a depiction of a tent peg through a man’s temple.

The National Gallery, in Trafalgar Square has also brought together Titian’s epic series of large-scale mythological paintings, known as the Poesie, for the first time since the late 16th century.

It is the first time the Titian’s have been on display together for 400 years.

The exhibition was only open for three days before the first lockdown.

The Prince of Wales has been Patron of the National Gallery since 2017.

The gallery closed for 111 days during the lockdown.

It reopened yesterday/today for the first time since November 2.

The Duchess of Cornwall visited the National Gallery in July this year, when it reopened after the first lockdown.