Curfews are now in place across 20 US states as authorities attempt to contain anti-racism protests entering their sixth consecutive evening.

Thousands of National Guard troops have been unleashed on major US cities as demonstrators continue to take to the streets following the death of African American man George Floyd during his arrest by Minneapolis police.

Police fired tear gas at protesters as the demonstrations erupted outside the White House in Washington DC as fired burned on the streets.

Two night earlier, US President Donald Trump was reportedly taken into the White House’s underground bunker for about an hour as the protests escalated.

Speaking live on television on Sunday evening, Minneapolis’s police chief Medaria Arradondo said he believed the three officers who stood by as Derek Chauvin held his knee on Mr Floyd’s neck for nine minutes were “complicit” in his death.

Chauvin has been arrested and charged with third degree murder and manslaughter, but the other three officers have not been charged.

“Being silent or not intervening, to me, you’re complicit. I don’t see a level of distinction,” Mr Arradondo told CNN.

“If there were one solitary voice that would have intervened in that, that’s what I would have hoped for. That did not occur.

“To the Floyd family, I want you to know, my decision to fire all four officers was not based on some sort of hierarchy. Mr Floyd died in our hands, and so I see that as being complicit.”

Nearby in Minneapolis, a tanker truck moving at high-speed has ploughed into a highway full of protesters in Minneapolis as demonstrations there and around the US enter their sixth consecutive evening.

Local media showed footage of thousands of people rushing to either side of the highway before the truck came barrelling down the middle of the road.

A crowd of protestors dispersed as a truck was dangerous driving at full speed on the I-35W bridge in Minneapolis. The driver eventually stopped. pic.twitter.com/8g59EIu84L

Police have since told local media no protesters were injured and the truck driver has since been taken to hospital in police custody with non-life threatening injuries.

With the highway closed to all traffic, it is still unclear how the truck driver gained access.

In Atlanta, video showed police officers using tasers in an attempt to get two people out of a car during a protest.

Local media, who were broadcasting nearby, said the officers smashed in the windows and flattened the cars tires before arresting one woman and one man, who they tasered in the process.

Meanwhile, Mr Trump blamed anarchists and far-left activists for the violence, threatening to officially designate one group as terrorists, while local leaders appealed to citizens to give constructive outlet to their rage without destroying their communities.

Lori Lightfoot, the mayor of Chicago, said her city was sharply limiting access to its central business district after violent protests. She reflected the exasperation of many officials and ordinary residents over the turn from peaceful protest to explosive violence.

She told CNN she was “hurt and angry at those who decided to try to hijack this moment and use it as an opportunity to wreak havoc, to loot and to destroy. You should be ashamed of yourselves. What you have done is to dishonour yourself, your family and our city.”

The shocking videotaped death on Monday of an unarmed black man, George Floyd, at the hands of police in Minneapolis ignited a nationwide wave of outrage over law enforcement’s repeated use of lethal force against unarmed African Americans.

From Seattle to New York, tens of thousands of protesters took to the streets demanding tougher murder charges and more arrests over the death of Floyd, who stopped breathing after Minneapolis police officer Derek Chauvin knelt on his neck for nearly nine minutes.

Chauvin has been charged with third-degree murder; three other officers with him have been fired but for now face no charges.

Meanwhile, US National Security Advisor Robert O’Brien denied the existence of systemic racism in police forces across the US.

The fourth in a string of chief security advisors to US President Donald Trump over the past three years, Mr O’Brien claimed there were only “a few bad apples” among police ruining the reputation of the vast majority.

“No, I don’t think there’s systemic racism. I think 99.9% of our law enforcement officers are great Americans. Many of them are African American, Hispanic, Asian, they’re working the toughest neighbourhood, they’ve got the hardest jobs to do in this country and I think they’re amazing, great Americans,” he told CNN.

It is THAT feeling again. The one that makes me sick to my stomach and nudges me to hold my children close….And “YES” I’ve felt it EACH time, at home and watching it from afar. “I, too, am America.” ~Langston Hughes #GeorgeFloyd pic.twitter.com/yw4PF5gRqc

“There are some bad cops who are racist. There are cops that maybe don’t have the right training.”

We cannot simply go back to the place we were before. That place is not good enough. If we do not fix the systemic issues, we will be back to a point with our communities on fire, our security and safety in question, and a searching for who we are.

Mr Walz extended a curfew for a third night Sunday and praised police and guardsmen for holding down violence, saying, “They did so in a professional manner. They did so without a single loss of life and minimal property damage.”

“Congratulations to our National Guard for the great job they did immediately upon arriving in Minneapolis, Minnesota, last night,” Mr Trump said in a tweet adding that they “should be used in other States before it is too late!”

The Department of Defense said that around 5,000 National Guard troops had been mobilised in 15 states as well as the capital Washington with another 2,000 on standby.

The widespread resort to uniformed National Guards units is rare, and it evoked disturbing memories of the rioting in US cities in 1967 and 1968 in a turbulent time of protest over racial and economic disparities.

The country has to come together to say to elected officials and policy makers that enough is enough.

In Washington, protesters faced off with secret service agents outside the White House for a second straight night as Mr Trump faces the most serious civil unrest of his presidency, in the middle of the historic coronavirus pandemic. Eleven Washington police officers were injured, a spokesman said on Sunday, including one who suffered a fractured leg.

Multiple arrests were reported by US media in Minneapolis, Seattle and New York as rallies continued through the night. Officers in Los Angeles fired rubber bullets and swung batons during a testy standoff with demonstrators who set fire to a police car.

Mr Trump blamed the extreme left for the violence, saying he planned to designate a group known as Antifa as a terrorist organisation.

But Atlanta Mayor Keisha Lance Bottoms said that Mr Trump, who has often urged police to use tough tactics, was not helping matters.

Get tough Democrat Mayors and Governors. These people are ANARCHISTS. Call in our National Guard NOW. The World is watching and laughing at you and Sleepy Joe. Is this what America wants? NO!!!

“We are beyond a tipping point in this country, and his rhetoric only enflames that,” she said on CBS. “And he should just sometimes stop talking.”

Democratic presidential candidate Joe Biden condemned the violence, but said on Sunday that US citizens had every right to demonstrate.

“Protesting such brutality is right and necessary,” he said in a late-night statement. “But burning down communities and needless destruction is not.” 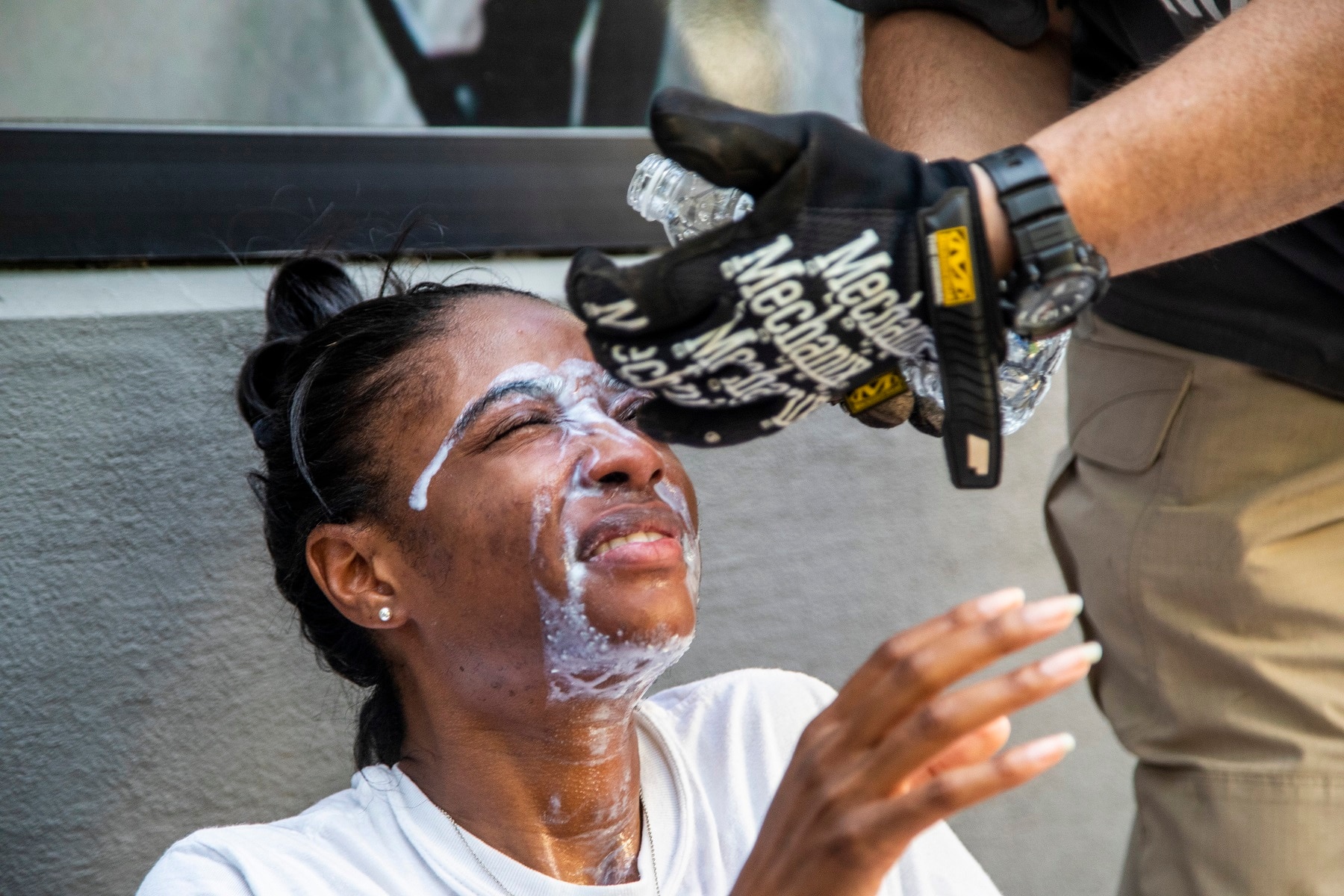 Jessica Peacock, a school teacher from Raleigh in North Carolina, washes her eyes after being hit with tear gas.

‘Not turning the cheek’

Peaceful protests occurred too, including in Toronto as the movement spread beyond America’s borders.

Demonstrators nationwide chanted slogans such as “Black Lives Matter” and “I can’t breathe,” which Mr Floyd was heard saying repeatedly in his final moments, as he lay, handcuffed, on the ground with Chauvin’s knee on his neck.

Like so many of you, I’m pained by these recent tragedies. And I’m exhausted by a heartbreak that never seems to stop. Right now it’s George, Breonna, and Ahmaud. Before that it was Eric, Sandra, and Michael. It just goes on, and on, and on. pic.twitter.com/lFWEtTzVT8

If we are complacent, if we are silent, we are complicit in perpetuating these cycles of violence.

None of us can turn away. We all have an obligation to speak out.

Some placed flowers in front of the shop where Floyd was arrested on Monday.

There was looting in Miami, where a curfew was announced. Houston police made more than 130 arrests. The Denver mayor said people had been stopped while bringing “assault weapons, handguns (and) baseball bats” into the city. And Los Angeles expanded its curfew order as looting broke out.

In New York, Mayor Bill de Blasio said a video showing a police car forcing its way through protesters in Brooklyn was “upsetting” but that he did not blame the officers, who faced “an extremely dangerous situation.”

We don’t need to lose the passion or the outrage — we need to direct it. Like a laser focused on real, positive change.

That’s how George Floyd does not become just another name in a long list of people who should never have died.

That’s how his death won’t be in vain.

But unlike other mayors, Mr de Blasio declined to declare a curfew and said he opposed bringing in “outside military forces” to help local police.

“If you’re bringing outside military or police forces you actually endanger the safety and security of New Yorkers because they’re not trained to handle the realities of our streets and our communities,” he told reporters.

A Dilemma in Texas

‘Mourinho is edging Alli out at Tottenham’ – Spurs relationship has soured, says Jenas

Society will benefit from cash handout

‘Mourinho is edging Alli out at Tottenham’ – Spurs relationship has soured, says Jenas

Society will benefit from cash handout