Queen Letizia of Spain cut a stylish figure in a pleated white midi skirt as she attended an event in Madrid today.

The royal mother-of-two, 48, looked radiant as she joined her husband King Felipe, 53, while they chaired the presentation of the new corporative strategy and brand of IFEMA convention and exhibition center.

She accessorised with a black clutch bag with gold hardware, her usual rings and a pair of silver, tear drop-shaped dangling earrings. 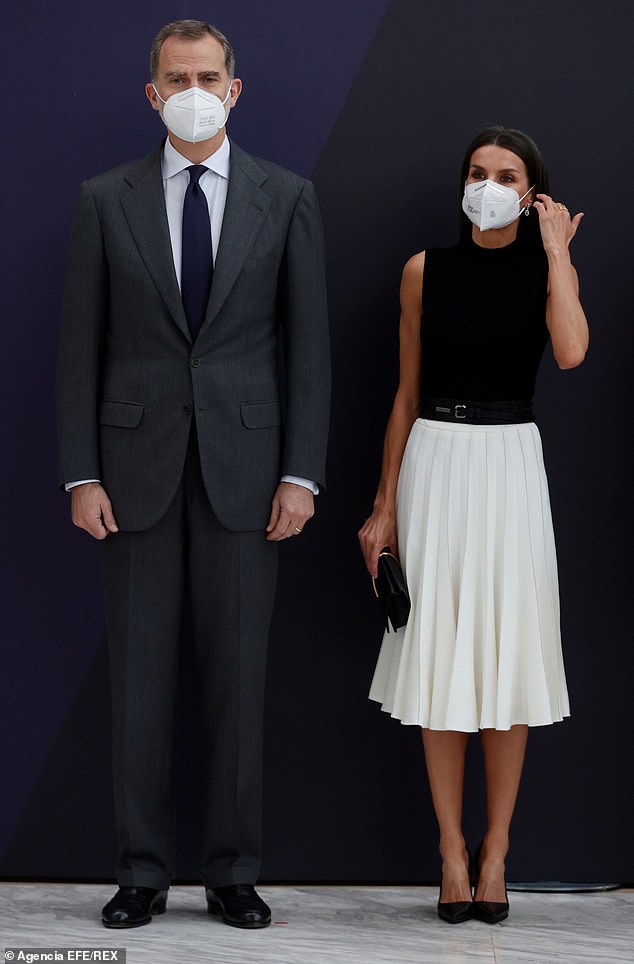 Queen Letizia of Spain looked stunning in a pleated white midi skirt as she chaired the presentation of the new corporative strategy and brand of IFEMA convention and exhibition center with her husband King Felipe, 53, in Madrid today

The stylish Spanish monarch opted for a glowing, natural make-up look, with a lick of brown eyeshadow across her lids.

Queen Letizia wore her brunette locks down and paired the outfit with pointed stiletto heels.

The royal couple wore white face coverings in line with the country’s coronavirus guidelines which says masks are mandatory in all public spaces, indoor and outdoor.

Meanwhile, King Felipe wore a smart grey suit with a navy blue tie and white shirt for the event. 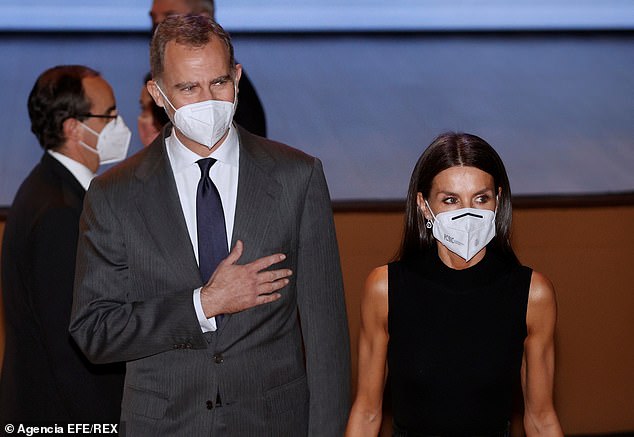 The royal mother-of-two looked radiant, as she opted for a glowing make-up look with a small amount of brown eyeshadow on her lids

It comes amid a busy period for the couple, days after Queen Letizia attended  the placing of the desk of late MP Clara Campoamor at the Congress of Deputies.

The event commemorated the 90th anniversary of the female vote in Spain, when Clara Campoamor’s desk and various personal belongings were placed in the Congress Place.

Queen Letizia made a statement in a scarlet ensemble, a bold trouser suit which is a favourite for the royal, who has recycled it on several occasions.

The outfit is a favourite for Letizia, who also chose the crimson number when she chaired the board of trustee’s meeting of the Foundation of Student Residences in Madrid in October last year. 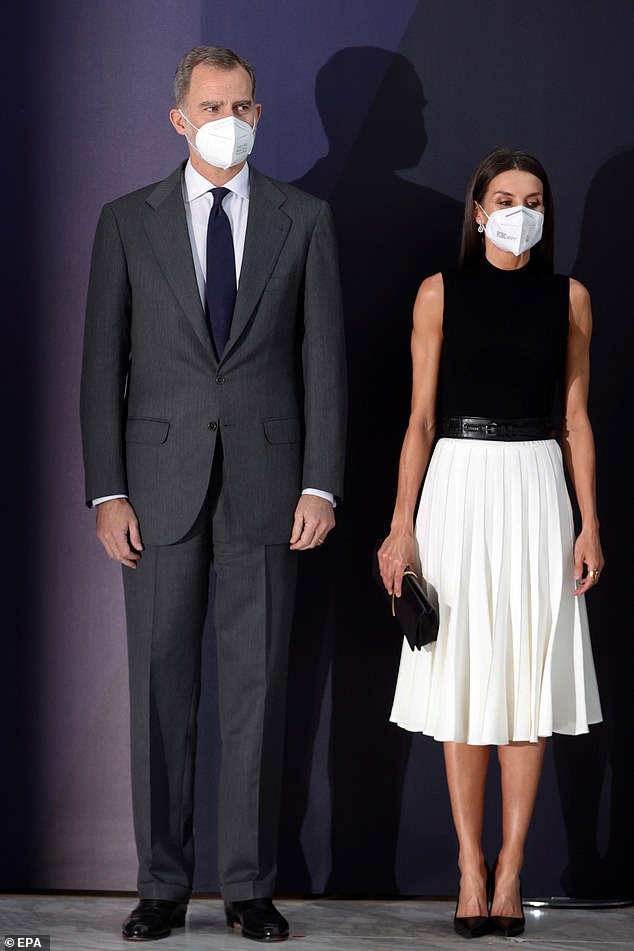 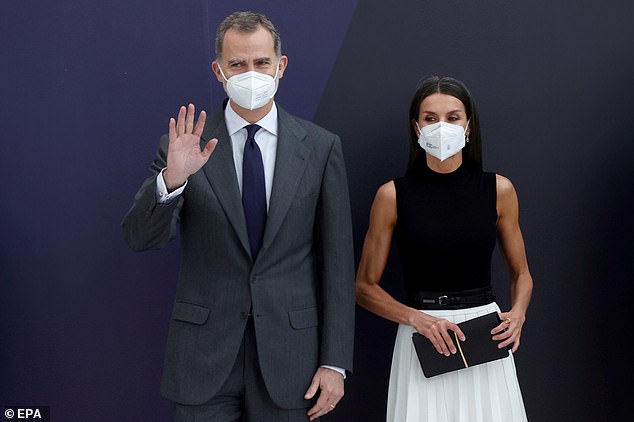 The stylish Spanish monarch accessorised with a black clutch bag with gold hardware and her usual rings, as well as a pair of silver tear drop-shaped dangling earrings

Clara Campoamor was a Spanish politician and feminist who advocated for women’s rights and suffrage in 1931, during the writing of the Spanish Constitution.

It led to the inclusion of constitutional language that sought to guarantee equality between men and women.

It comes after she and her husband King Felipe, 53, penned a telegram addressed to ‘Dear Aunt Lilibet’ to mourn the passing of ‘Dear Uncle Philip’, who died at Windsor Castle at the age of 99 on Friday. 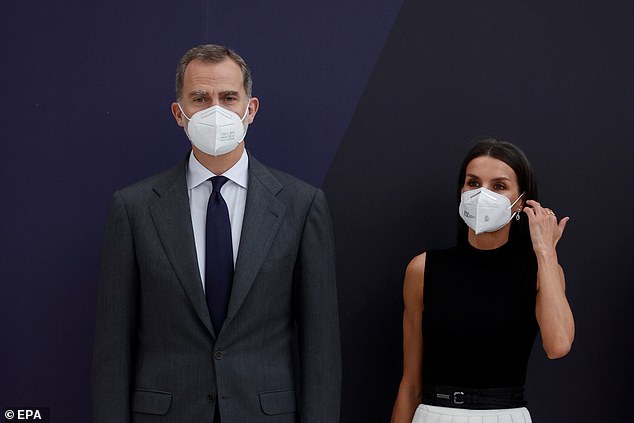 King Felipe, meanwhile, wore a grey suit with a navy tie and white shirt with black shoes for the event in Madrid

The familiarity between the British and Spanish royal households are thanks to Felipe’s maternal great-grandfather, King Constantine I of Greece (1868-1923), also being uncle to the Duke of Edinburgh.

Queen Elizabeth II announced her husband’s death at midday on Friday as the Union Flag was lowered to half-mast outside Buckingham Palace.

European royals were quick to offer their condolences, with Felipe sharing a touching and personal message to his ‘Dear Aunt Lilibet’, expressing ‘all our love and affection’.

It read: ‘We were deeply saddened to hear of the passing of our dear Uncle Philip. 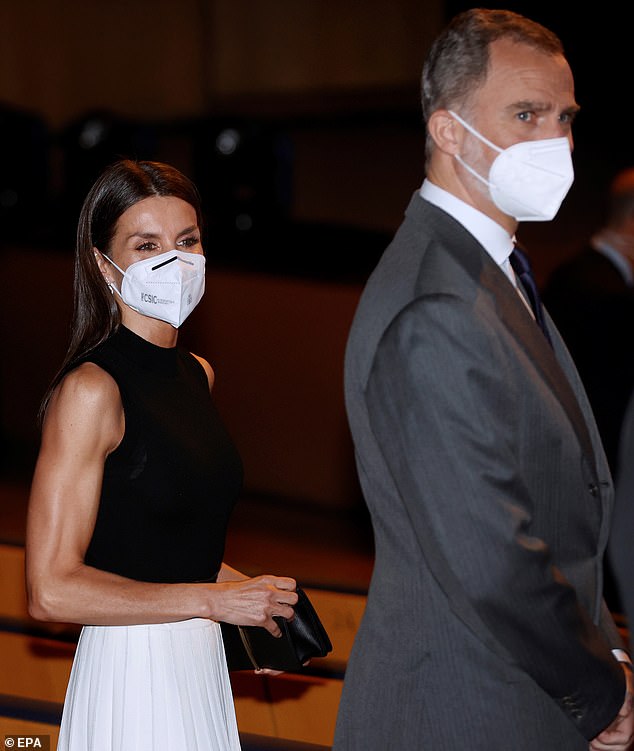 The royal couple sported white face coverings to keep with Spain’s coronavirus guidelines, which dictates masks should be worn in any public setting, whether indoors or outdoors 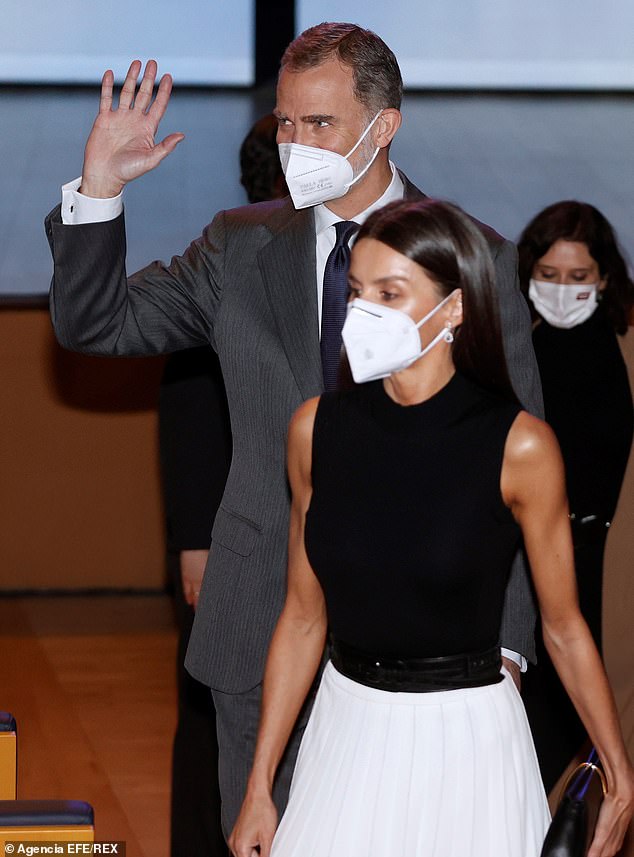 Queen Letizia’s glossy locks were worn down, and hanging loose down her back as she tucked it behind her ears

‘At this painful time, we would like to convey to you our deepest condolences on behalf of the Spanish Government and the people and all our closeness and support.

‘We will never forget the occasions we were able to share with him and the legacy of service and dedicated to the Crown and the United Kingdom that he always carried out at your side.

‘Our thoughts and prayers are with Your Majesty and the whole family. With all our love and affection.’