Lee Mason has reportedly been removed from his duties on Liverpool‘s Premier League game with Sheffield United, following his free-kick debacle at West Brom on Saturday.

Brighton defender Lewis Dunk scored a quick free-kick in the first-half, but Mason disallowed it before changing his mind and awarding the goal.

But after VAR checked the goal, Mason had to blow his whistle again to confirm that it had been ruled out, sparking angry reactions from the Brighton players. 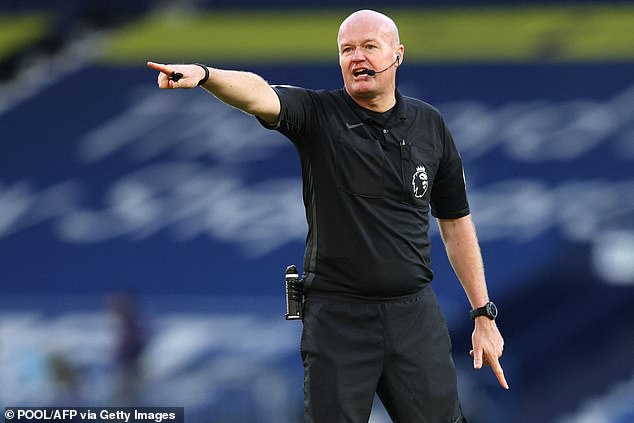 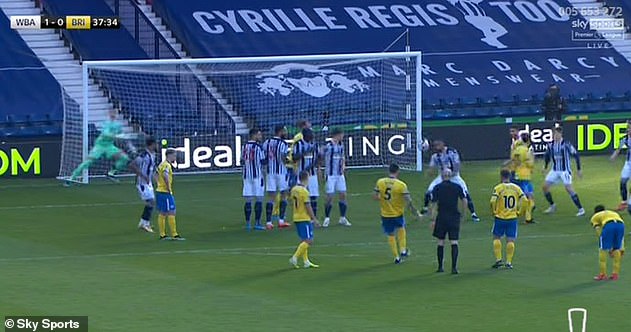 Lewis Dunk’s quick free-kick was disallowed, then awarded and then disallowed again by Mason

The Independent have now reported that Mason has been removed from his duties as the fourth official for Sunday’s game at Bramall Lane.

Sportsmail‘s man at the game on Saturday, Rob Draper, said players could be heard calling the referee a ‘f****** disgrace’ and a ‘f****** embarrassment,’ but received no punishment.

The incident started when West Brom goalkeeper Sam Johnstone was at his post setting the wall when the referee blew his whistle, and Dunk quickly took the opportunity to place the ball in the other corner.

However, as the ball was in flight, Mason for some reason blew his whistle again leading to mass confusion and huge protests from the Brighton players.

After a discussion with his assistants, Mason then gave the goal, but VAR advised him to overrule himself again and stick with his original decision after looking at the incident.

They ruled that since there was a second whistle before the ball crossed the line, that the goal had to be disallowed, and the free kick be taken again. 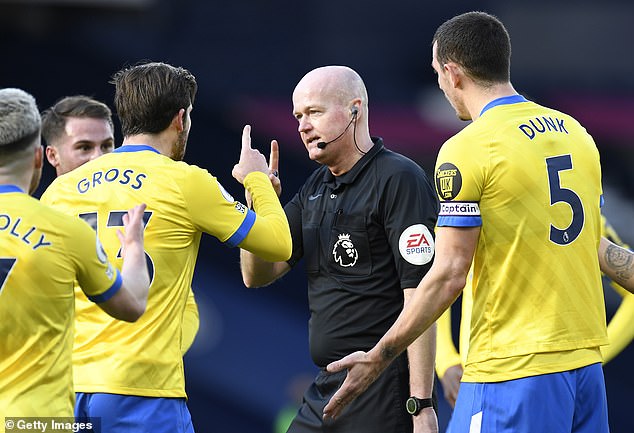 An angry Dunk said after the match: ‘It’s embarrassing, an horrendous decision. I asked the ref if I could take the free-kick, he blew his whistle and I took it. Just because you have so much pressure from the bench and the players he disallows the goal.

‘VAR don’t know what he said. It’s an horrendous decision. Why doesn’t he come speak to the press like me? Why doesn’t he come and say his point? Never. They hide behind their bubble… that’s fine, isn’t it? I don’t think he knew what he was doing. I said to him, ‘can I take the free-kick?’, he said ‘yes’, he blew the whistle and I took it.

‘It went in the back of the net and he give the goal. Why did he give the goal? Because he knew he said go. I don’t know how VAR is getting involved because he said the words. You can go back and look at the video if you want.’

Mason was set to be tasked with separating Jurgen Klopp and Chris Wilder on the touchline in the evening Premier League game on Sunday.

The Liverpool and Sheffield United bosses have had a war of words earlier this season, and Mason previously felt the wrath of Klopp following his role in their 1-1 draw with Fulham in December.

Bobby Decordova-Reid netted in the first half, but Klopp felt that Mohamed Salah was fouled in the build-up.

Referee Andre Marriner sought help from Mason, who was on VAR duty, who decided that it was ‘normal contact’.

After the game Klopp questioned how Mason came to the decision he did.

He said: ‘I am not sure what Lee Mason is doing at home but that is not “normal contact” in football.

‘It’s not a big deal but there is contact and it’s enough contact to get an advantage. It’s a foul. But we cannot change it, I only spoke about it because you asked me.

Mason Mount on Thomas Tuchel, his relationship with Frank Lampard & plans for the future