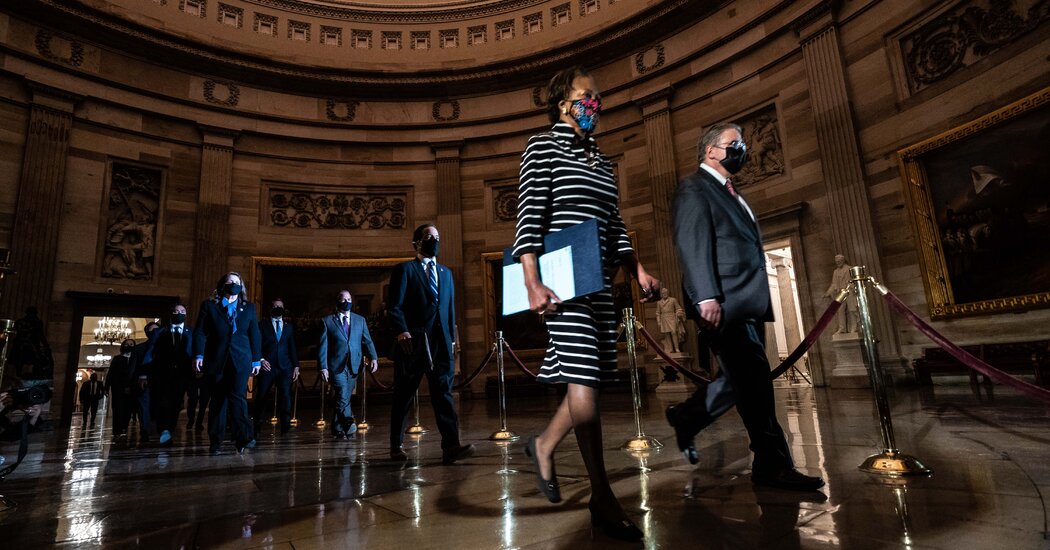 After Mr. Raskin read the charge in full, the managers departed, leaving the matter to the Senate, which planned to reconvene at 2:30 p.m. Tuesday to issue a summons to Mr. Trump to answer for the charge. Senators were expected to formally agree to a schedule for the coming weeks and swear an impeachment oath dating to the 18th century to do “impartial justice.”

Mr. Trump’s new defense lawyer, Butch Bowers, was said to be trying to line up at least one additional lawyer to join him, according to people familiar with the planning. He was also working with Jason Miller, an adviser to Mr. Trump, on a public-relations campaign.

Other aspects of the trial began to come into focus on Monday as well. Senator Patrick J. Leahy, the Senate president pro tempore, said he would preside over the trial, assuming a role filled last year by Chief Justice John G. Roberts Jr.

The Constitution states that the chief justice of the United States presides over any impeachment trial of the president or vice president. But it does not explicitly give guidance on who should oversee the proceeding for others, including former presidents, and it appeared that Chief Justice Roberts was uninterested in reprising a time-consuming role that would insert him and the Supreme Court into the political fight over Mr. Trump.

The role was largely ceremonial in the first impeachment trial of Mr. Trump a year ago. But as the presiding officer, Mr. Leahy, Democrat of Vermont, could issue rulings on key questions around the admissibility of evidence and whether a trial of a former president is even allowed under the Constitution. He will also retain a vote himself.

The job could also have gone to Vice President Kamala Harris, in her capacity as president of the Senate. But there were clear drawbacks for Ms. Harris in overseeing a proceeding that is all but certain to be regarded by some as an effort by Democrats to use their newfound power to punish the leader of the rival political party.

Mr. Leahy’s presence on the dais could open Democrats to similar charges from the right, particularly if he issues a contentious ruling, but officials said there was no clear alternative without the chief justice. In a statement, Mr. Leahy was adamant he would take “extraordinarily seriously” his trial oath to administer “impartial justice.”

Elementary: Biden Press Sec Psaki Tells Media What a Banknote Is After Declaring Harriet Tubman Will Go on the $20 Bill

Top Official at Indian Health Service Will Step Down