Rishi Sunak will splash the Covid cash again today vowing to use ‘full fiscal firepower’ to help the recovery – with furlough set to last until October.

In a crucial Budget that could set the country’s path for years to come, the Chancellor will go big by extending the £53billion scheme for an extra five months, as well as keeping self-employed and business bailouts.

The £20-a-week boost to Universal Credit is expected to stay for another six months, alongside VAT and business rates breaks for hospitality, leisure and tourism.

But as he unveils tens of billions of pounds more spending – on top of the £280billion already shelled out by the Treasury – Mr Sunak is also likely to deliver a stark message that the largesse cannot continue.

He has indicated there will be a plan for repairing the devastated public finances and making the UK less vulnerable to its spiralling £2.1trillion debt mountain, with corporation tax, pensions tax relief, and a freeze on tax thresholds among the revenue-raising options.

Alongside the financial package the government’s OBR watchdog will provide a critical assessment of the economy’s prospects, with hopes that the swift vaccine rollout might have slashed the black hole that needs to be filled with tax rises and spending cuts below the eye-watering £40billion some experts feared.

A Tory civil war is raging over the prospect of tax hikes, with senior figures such as Lord Hammond and Lord Hague saying action must be taken to balance the books but others warning it will strangle the recovery.

The respected IFS think-tank said this morning that there should not be any tax rises this year, while former OBR chief Robert Chote said the UK was in a ‘period of battlefield medicine for the economy’ and the deficit should not be tackled ‘too aggressively’.

Mr Sunak will address the Cabinet this morning on the contents of his Budget, before announcing the measures to MPs at 12.30pm. But he has come under fire from Speaker Lindsay Hoyle for pre-briefing and his slick PR drive, including ‘rushing off’ after the Commons statement to take a press conference in No10. 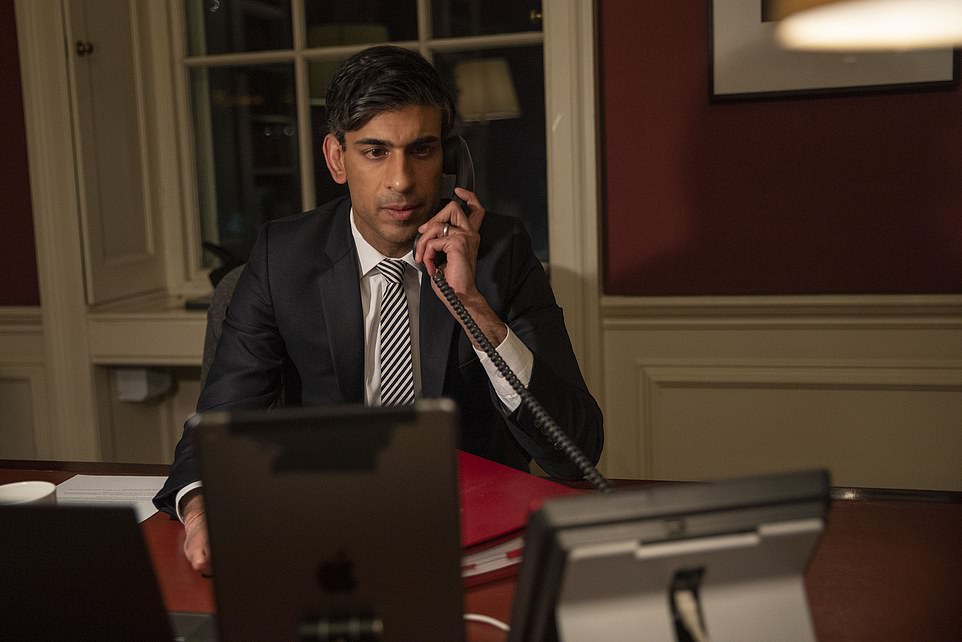 The furlough scheme that has cost Britain £53billion will be extended to the end of September as Rishi Sunak vows to do ‘whatever it takes’ to help the economy recover. Pictured: Rishi Sunak calls The Queen on 2 March ahead of the budget 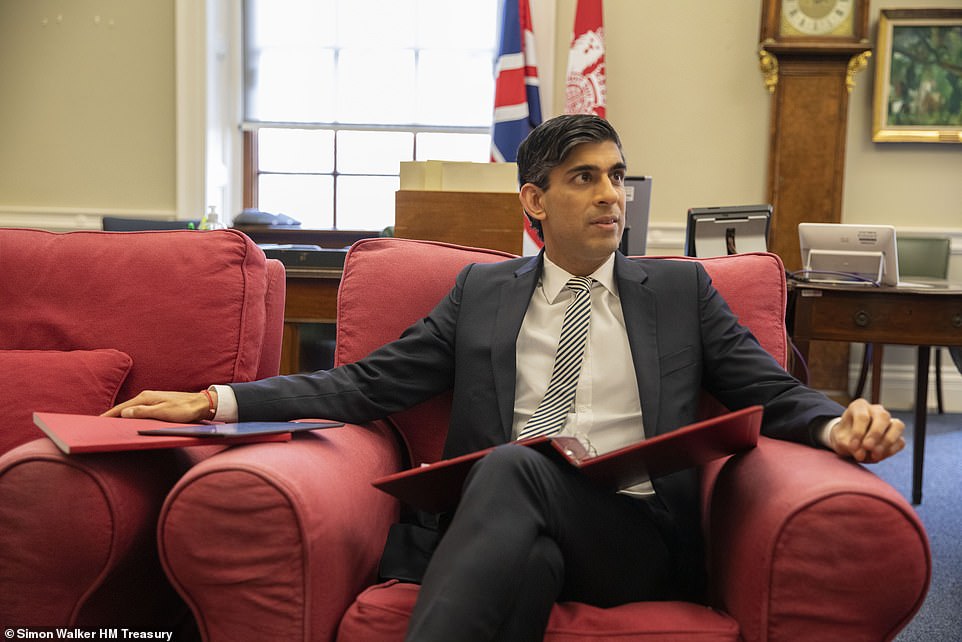 In today’s Budget, the Chancellor will extend the job protection scheme for an extra five months beyond the current deadline at the end of April 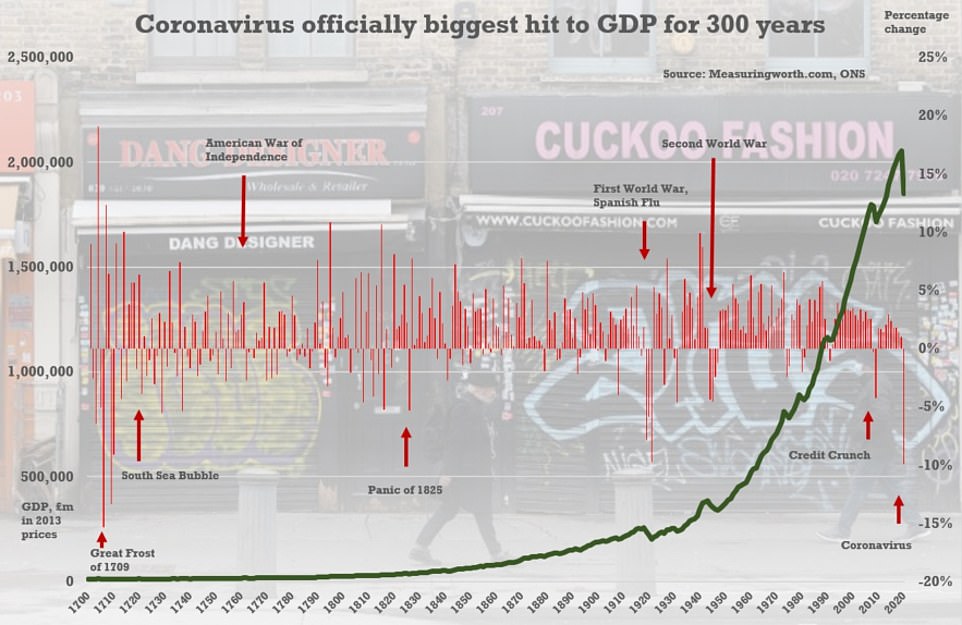 The Office for National Statistics has said over the whole of 2020 the economy dived by 9.9 per cent – the worst annual performance since the Great Frost devastated Europe in 1709 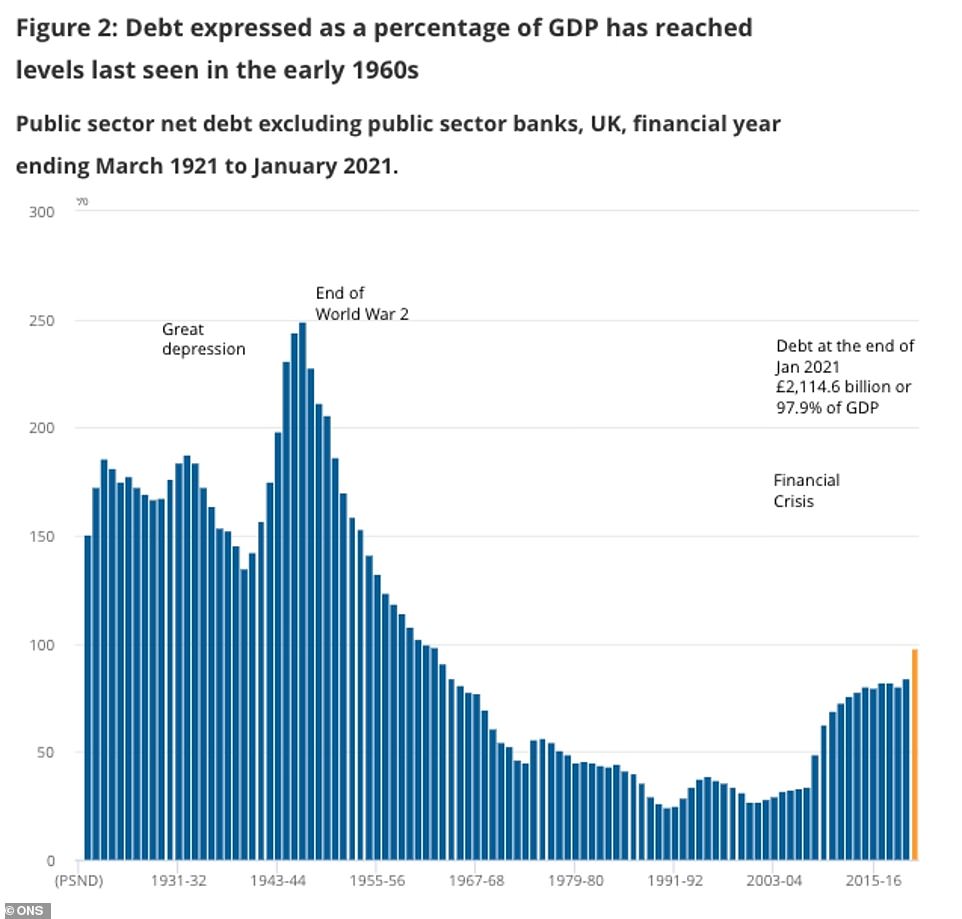 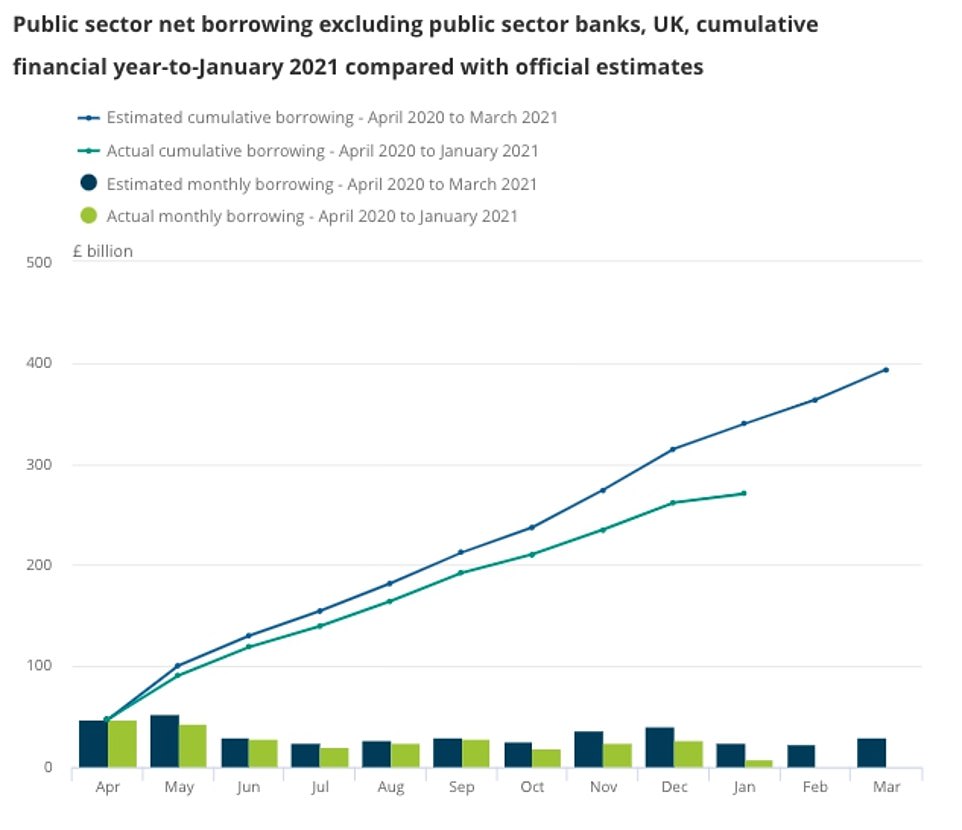 What Rishi Sunak will be dishing out in Budget

Furlough was due to close at the end of April, with warnings of a wave of layoffs as still-stricken businesses cut loose workers.

The extension today will take the scheme, which costs around £5billion a month, well beyond the official target for ending lockdown on June 21 – raising questions about whether ministers expect to lift all restrictions at that point.

Self-employed workers will also benefit from another round of support paying them 80 per cent of profits.

In a surprise move, the scheme will be extended to cover 600,000 ‘excluded’ workers who did not qualify before because they did not begin trading until 2019.

The Chancellor is also expected to extend the £20-a-month top-up to Universal Credit for another six months.

The current VAT cut for hospitality and tourism firms will also be extended, probably until the end of the summer.

And a business rates holiday for hard-hit sectors will continue beyond the current deadline at the end of this month.

Mr Sunak is also launching a £100million taskforce to tackle furlough fraud, estimated to have cost up to £5billion.

A government report uncovered by MailOnline this week revealed that the government was already losing up to £52billion a year to fraud – more than the defence budget – and the problem might have reached ‘epidemic’ levels during the pandemic.

The Queen last night spoke with Mr Sunak by phone instead of the traditional audience on the eve of the Budget.

The Treasury shared a photograph of the chancellor during the call.

The Chancellor said last night that support schemes, whose total cost is near £300billion, had been ‘a lifeline to millions’.

Today he will vow to use the state’s full ‘fiscal firepower’ to protect jobs and livelihoods.

‘We will continue doing whatever it takes to support the British people and businesses through this moment of crisis,’ he added.

Government sources indicated only last week that the furlough scheme and other support measures would carry on until at least the end of June.

Mr Sunak’s decision to push on until the end of September, three months after all restrictions are due to be lifted, will raise eyebrows. 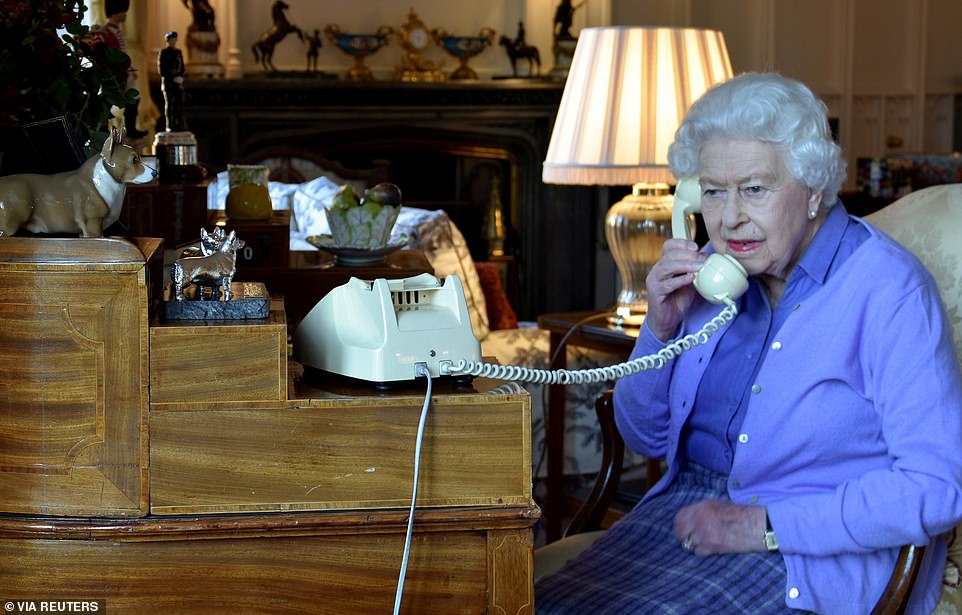 The Queen last night spoke with Mr Sunak by phone instead of the traditional audience on the eve of the Budget. The Treasury shared a photograph of the chancellor during the call 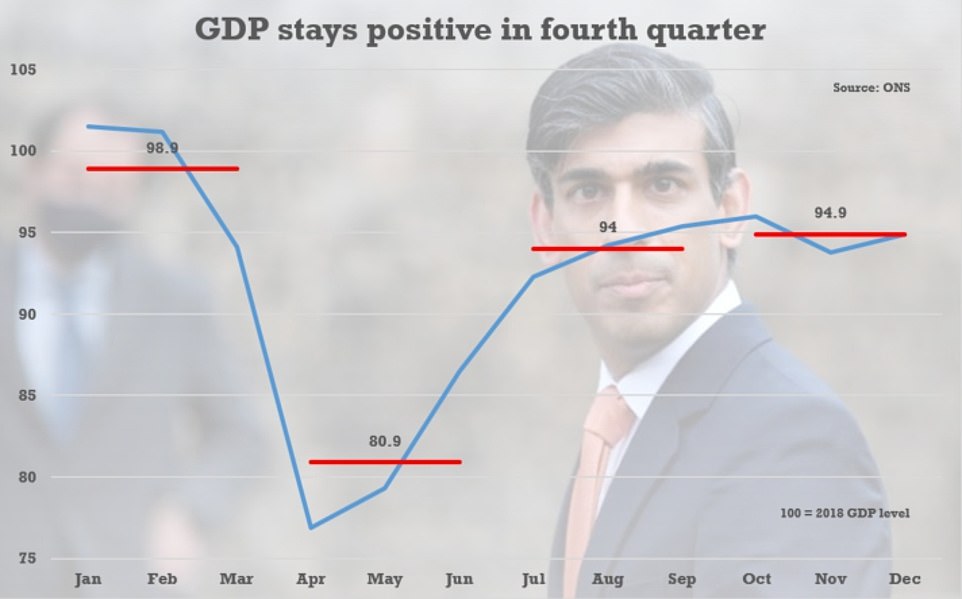 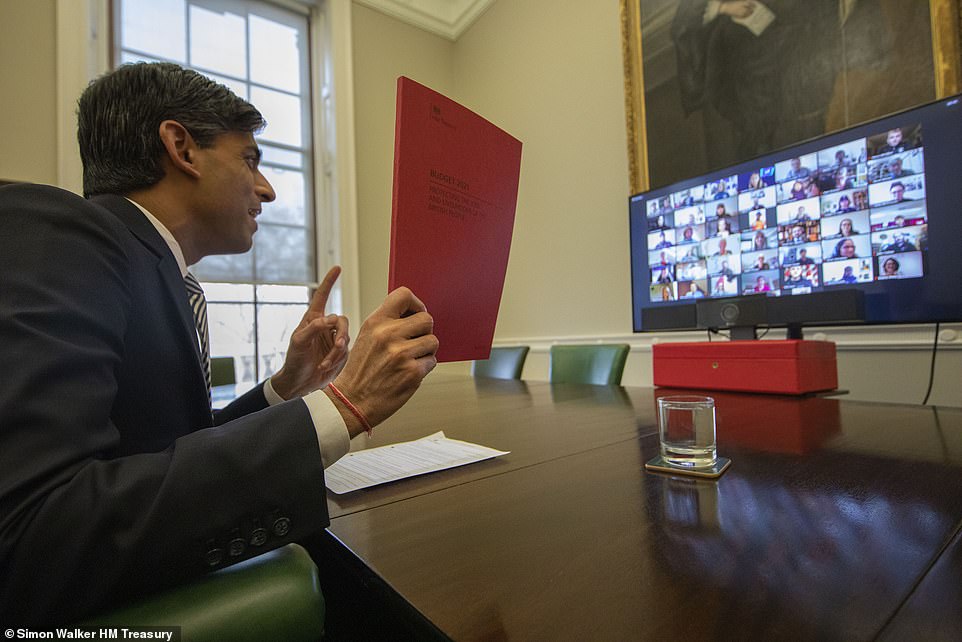 Mr Sunak’s decision to push on until the end of September, three months after all restrictions are due to be lifted, will raise eyebrows

Treasury sources said the move was to avoid a ‘cut-off’ as some firms resume trading for the first time in more than a year .

‘They don’t want a cliff edge and we have listened,’ said a source. But the Treasury also acknowledged the extension would be a ‘cushion’ if reopening is delayed.

The cost of the scheme is due to be curbed after the economy is reopened.

Furloughed staff now get 80 per cent of pay from the state, up to £2,500 month, with employers paying only national insurance and pension contributions.

From July firms will also have to pay 10 per cent of wages as the state share shrinks to 70 per cent – and in August the figures will change again, to 20 per cent and 60 per cent respectively.

Almost five million people were furloughed at the end of January – double the number in October, but well below the peak of almost nine million last May.

Up to last week the scheme had cost £53.4billion.

And CBI chief economist Rain Newton-Smith said: ‘Extending the scheme will keep millions more in work and give businesses the chance to catch their breath as we carefully exit lockdown.’

Paul Johnson, director of the Institute for Fiscal Studies (IFS), said he was not expecting tax rises to come in this year.

He told BBC Radio 4’s Today: ‘The bigger picture is that we’ve had the most awful, very deep recession with a huge amount of Government support, so in some senses it hasn’t felt like that.

‘There are some suggestions and reports that the OBR’s (Office for Budget Responsibility) forecasts over the next few years are going to be rather more optimistic than they were back in November and if they are, if it looks like the economy has a good chance of bouncing back well, that will make some of his decisions a bit easier.

‘Because remember what the Chancellor is not really thinking about is ‘how can I pay back the debt that I’ve incurred over this couple of years?’.

‘It is much more, ‘if the deficit remains big in the coming years, what do I need to do to plug that hole?’. And if the economy is bouncing back then there is less of a hole to plug.

‘But there will still be something of a hole and that will mean, I expect, some tax rises, but not this year – in the next two or three years.’

‘Most economists would accept that if you have the size of the public debt jump up so you have a temporary increase in borrowing that increases your stock of debt, you don’t want to try to reverse that very quickly or very aggressively,’ he said.

‘One of the lessons obviously people have taken out of the experience after the financial crisis is that even if you do have a bigger structural budget deficit, even with that you don’t want to go at it too aggressively in case you weaken the recovery and make the situation worse.

‘But that is not to say that if there is a permanent increase in the structural budget deficit from the hit to the economy, and in addition you decide you want a larger state coming out of this, then the decisions on tax can’t be put off forever.’

He added that the country was in ‘a period of battlefield medicine for economic policy’ and that there needed to be an acceptance of a ‘broader brush approach’ than in less extreme circumstances.

Labour leader Sir Keir Starmer will respond to Mr Sunak’s Budget in the Commons today – and is facing infighting in his own party over its approach.

Sir Keir has been slammed by left-wingers after saying taxes should not rise quickly, while Labour bible the New Statesman has complained the party has ‘no idea what it wants’ under his leadership.

Business Secretary Kwasi Kwarteng rejected calls for tax rises yesterday as a Tory debate raged over how to tackle the huge deficit caused by the pandemic.

Former party leader William Hague has backed Rishi Sunak to raise taxes in today’s Budget. He said the dire state of public finances meant ‘at least some business and personal taxes have to go up’.

Lord Hague said yesterday that those opposing tax rises harboured ‘dangerous illusions’ that low interest rates would let Britain borrow its way out of the crisis.

But in an intervention that underlines Cabinet tensions, Mr Kwarteng predicted ‘strong growth’ this year and said it was vital that the economic recovery was not ‘crushed’ by higher taxes. He said growing the economy will be the ‘best way to deal with the growing deficit’. 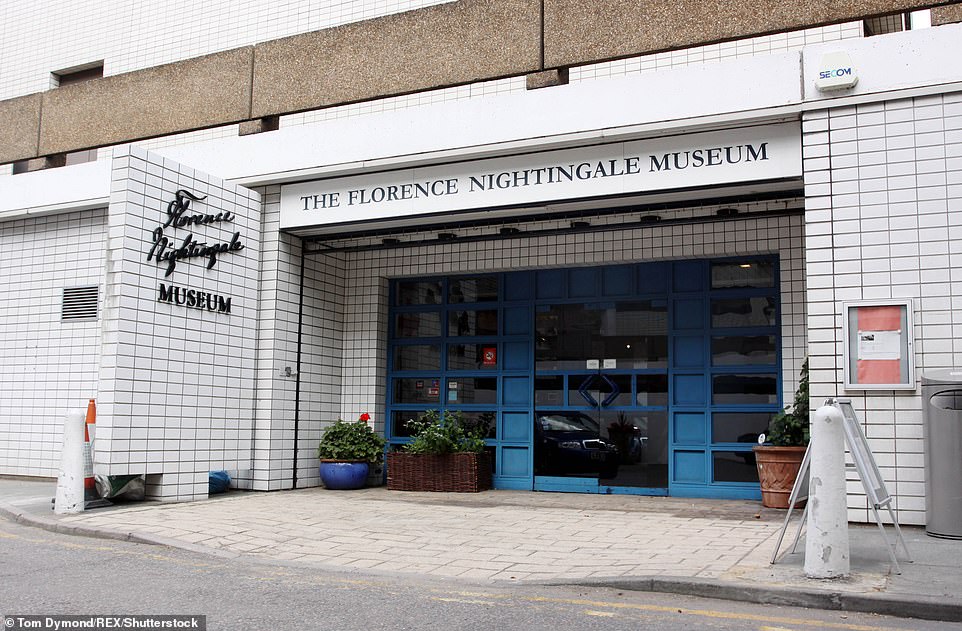 Theatres, museums and live music venues will be handed a £410million lifeline to help them stay afloat until they are allowed to reopen. Pictured: Florence Nightingale Museum in London, which has announced it is closing for the ‘foreseeable future’

Theatres, museums and live music venues will be handed a £410million lifeline to help them stay afloat until they are allowed to reopen.

Rishi Sunak will unveil the move in today’s Budget alongside fresh support for sport and pubs, which have also suffered heavy restrictions during the lockdowns of the last year.

The move follows talks between the Chancellor and Culture Secretary Oliver Dowden, who last year secured a £1.57billion bailout for the industry. Most arts and cultural events, including theatres, museums and galleries, are expected to get the green light to reopen in May.

But many may be unable to reopen their doors until Step Four of the roadmap from June 21 when the Government hopes to lift all social distancing restrictions that limit the size of audiences.

Chemical sensors in spinach can be used to fire off messages, scientists say