It was a date filled with excitement and it even ended with a first kiss.

Unfortunately for Emma Hunt and Alec Maguire, it also involved a terrifying 200ft plunge and a dramatic rescue from a Lake District fell.

The couple, who met on dating app Plenty of Fish, had decided to take a romantic hike up Blencathra.

But Miss Hunt, 40, watched in horror as her date slipped and fell from a perilous ridge known as Sharp Edge, landing on a ledge below. She was left stuck on a crag and unable to move. 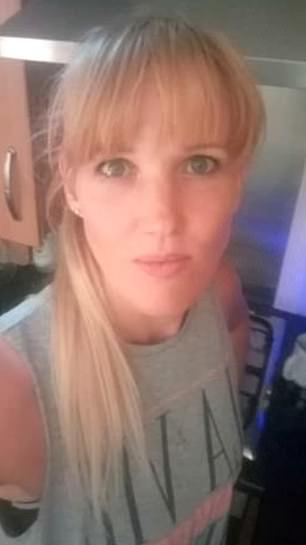 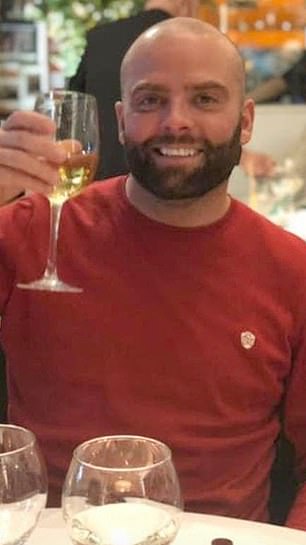 Emma Hunt, 40, (left) and Alec Maguire, 41, (right) met on dating app Plenty of Fish. Their second date was supposed to be a romantic hike but turned into a terrifying experience after Maguire fell 200ft. 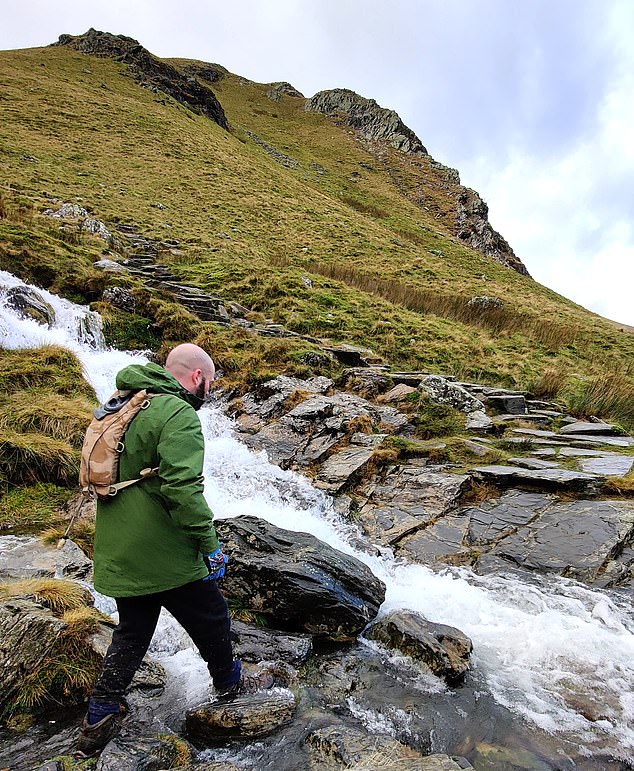 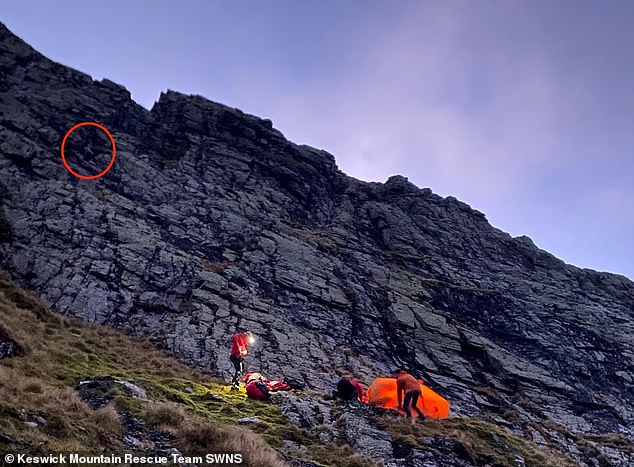 The couple – on only their second date – were saved by volunteers from Keswick Mountain Rescue Team.

And as Mr Maguire, 41, was being stretchered away he managed to steal a kiss from Miss Hunt after saying: ‘I hope I still get a third date.’

The drama happened on Saturday after the weather took a turn for the worse and they were forced to turn back without reaching the summit.

‘Where we were it looked like you could get down but we met a patch of rock which took Alec on a 60-metre trip.’ 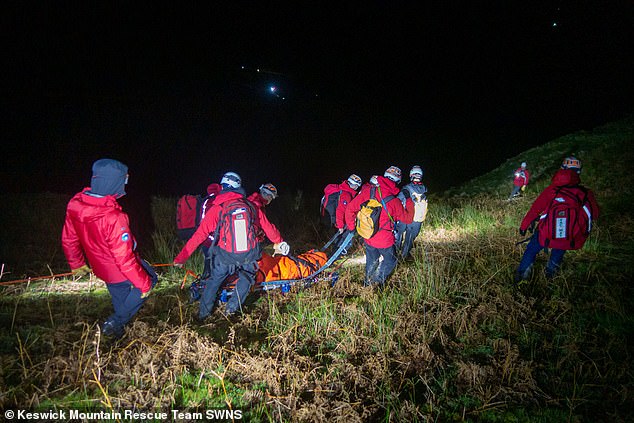 The rescue took five hours, with Maguire eventually being airlifted to a Glasgow hospital for treatment

The mother of two, who had spent weeks planning the hike, said: ‘I have been up and down fells a lot of times. I had researched the Edge, it was nothing above my capability. It was about an hour’s climb and then we had an hour and a half of daylight to get back to the car.

‘I feel utter responsibility as I mistook Alec’s enthusiasm for experience. I have told him he has to be 100 per cent honest with me in future.’ 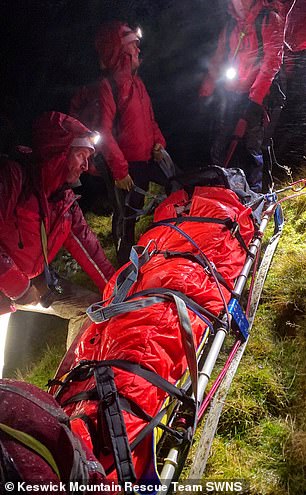 While on a stretcher, Maguire managed to steal a kiss from Hunt – the couple’s first

The couple called for help and were met an hour later by the 25 volunteers, who stretchered Mr Maguire off the fell.

The construction company owner had suffered a broken vertebra in his back and was taken to a Glasgow hospital by helicopter, where he remained last night.

Miss Hunt added the fall had put paid to Mr Maguire’s plan to kiss her for the first time when they arrived at the summit. She said: ‘They got him in a stretcher and carried him off the fell. As soon as they got me down and I caught up with him he said: ‘I hope I still get a third date.’

‘We obviously did not get to the top so that didn’t happen. I gave him a kiss when he was on the stretcher.

‘I told him ‘you probably won’t remember this due to the morphine’. The rescue workers all cheered.’

Mr Maguire was due to be discharged on Tuesday night and plans to move in with Miss Hunt ‘for a couple of weeks’ while he recuperates.

The couple’s first date was a hike up Rivington Pike in Lancashire. Miss Hunt, who thanked Keswick Mountain Rescue Team, said their next date would be less eventful.

‘We are going to have pizza and beers,’ she added. ‘He wants to take me out on a romantic date as well but I think that will be a surprise.’

Describing how they met online, she said: ‘His pictures were quite outdoorsy and his profile said he liked fine dining and wine – I mean, what girl does not like that?

‘I think that’s why we struck a chord. He was a little bit of everything that I was looking for. Alec never stopped asking if I was ok. He was my hero.’

This M.L.K. Day, America Has a ‘Long Road Ahead’

Chicago Man Takes A Year To Grow Hair To Donate To Cancer Patients, Only To See It Lost In Shipping