Scottish fishermen were forced to call in Royal Navy divers after they hauled a 770lb German WWII mine in their nets on board their trawler near the Isle of Bute.

The fishermen were rescued by the Troon Lifeboat and Rothesay Coastguard Rescue Team while the trawler travelled to rendezvous with the Northern Diving Group off based at Faslane.

The mine, which was laid by a German submarine, was deployed off the island of Aisla Craig and snagged in the fishing boat’s nets. 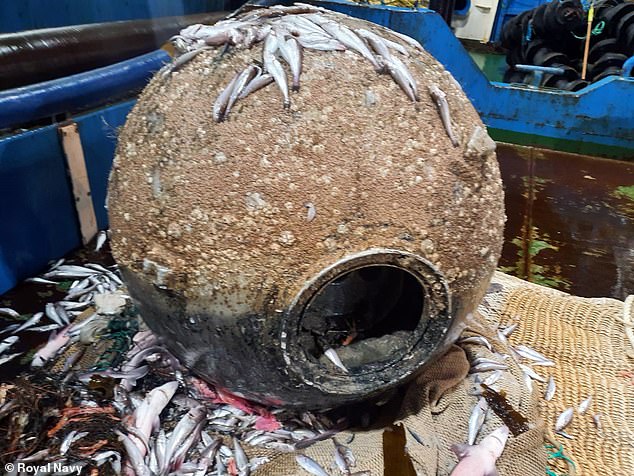 The WWII mine was dropped by a German submarine off Aisla Craig more than 80 years ago. According to the Royal Navy, the mine, pictured, was in ‘remarkable condition’ and was still full of high explosives 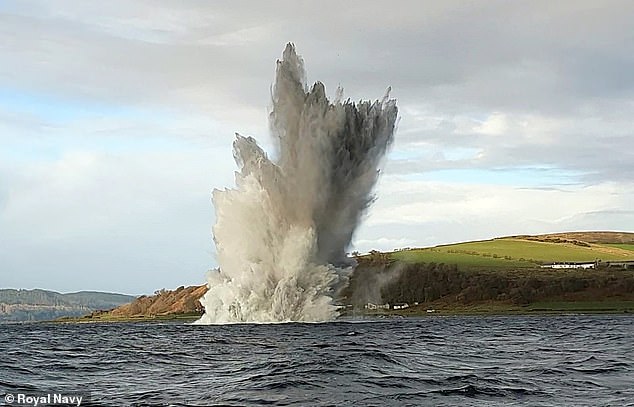 The Royal Navy carefully lowered the massive mine to the sea bed off the Ettrick Beach and detonated it in a controlled explosion, sending a massive tower of water and mud into the sky

The seven crew onboard the vessel were taken to safety before Royal Navy experts inspected the 770lb device.

The naval bomb squad decided the device was in ‘pristine condition’ and should detonated in a controlled explosion.

Navy divers carefully lowered the mine to the sea bed off Ettrick Beach where it was safely detonated sending a large tower of mud and water into the air.

Lieutenant Commander Mark Shaw, Commanding Officer of Northern Diving Group said: Considering it had been in the water for around 80 years, the mine’s condition was remarkable.

‘From the initial pictures we were able to easily identify the mine type and, importantly, determine that the explosive fill was intact and therefore presented a significant hazard.

‘The vessel was diverted to Ettrick Bay and met by my team, led by Petty Officer (Diver) Robert McCann who safely dealt with the situation.’

He continued: ‘Items of this size are relatively uncommon, however, the group are approaching 100 call-outs this year supporting civil authorities with all types of Explosive Ordnance Disposal, ranging from mines and torpedoes to hand grenades and improvised devices.

‘On average, across the UK, Royal Navy Clearance Divers are tasked once a day for EOD assistance. This highlights the remaining presence of historic ordnance. Even small items can be unstable and present an explosive hazard; carrying-out a controlled explosion is the only safe way of dealing with them and neutralising the hazard.’

Azar: Americans should have confidence in vaccine