A man who went shopping for a new barbecue at Bunnings saved $127 thanks to a last-minute brainwave at the checkout.

He was about to pay for a Matador model on clearance for $377.40 at a store in Brisbane, Queensland, when his wife remembered a post she had seen in the Facebook group, Markdown Addicts Australia.

The post included a photo of a receipt for the same barbecue for just $250.

Keen to shave money off their bill, the woman showed the photo to a manager who then sold it to them for the lower price – proving sometimes, all you have to do is ask. 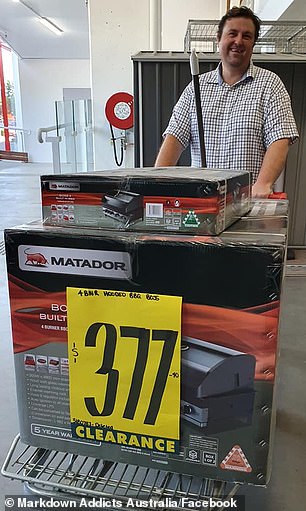 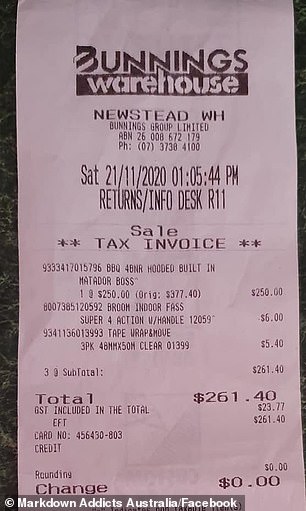 A Brisbane shopper was about to pay $377.40 for a barbecue on clearance at Bunnings, when his wife remembered seeing it for $127 cheaper in a Facebook group (left, a receipt for the discounted sale price of $250)

Similar Matador barbecues with two to three burners typically cost between $449 and $699.

Photos of the barbecue and its accompanying receipt, which have been ‘liked’ more than 2,000 times since they were uploaded on social media on Saturday night, have drawn dozens of delighted responses from fellow bargain-hunters.

‘Thanks to the lady who posted the photo. A big credit to you!’ the woman wrote in the caption.

‘Wow. What a good manager you have at the store. Also lucky buy,’ one man replied.

‘Happy man and a night to put your feet up! Great find,’ added another.

And it’s not the only big-time bargain Australian shoppers have found thanks to markdown groups on Facebook.

The mum-of-six said she found scores of items reduced to as little as 10c at 6pm in the Mooroopna store in country Victoria, 118 kilometres north of Melbourne.

Her haul included two-litre cartons of milk reduced to 20c, frankfurter sausages discounted to 17c, sliced ham down to 32c and deli-style salami for 21c, along with microwavable bags of carrots and vanilla yoghurt slashed to 10c.

Photos of the low-cost shop, which have been liked 322 times since they were uploaded on Monday, have drawn varied responses with many complaining their local supermarkets never offer such generous discounts.

‘I’ve never seen this ever, in all the years I have shopped at Coles. Amazing – well done,’ one woman said.

‘Great job! My stores never mark milk down that low!’ another added, while a third wrote: ‘Markdown game strong.’ 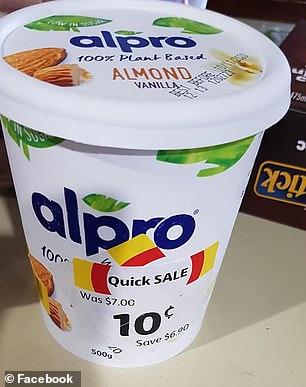 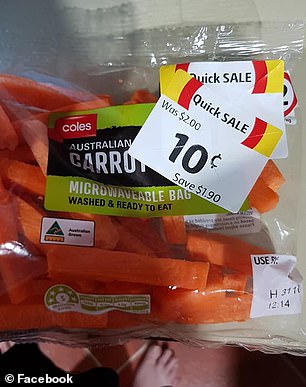 A mum-of-six found scores of items reduced to as little as 10c at 6pm in the Mooroopna store in country Victoria, 118 kilometres north of Melbourne, including vanilla yoghurt (left) and microwavable bags of carrots (right) down to 10c

Australian supermarkets are discounting items progressively through the day, with 20, 40, 60, 80 and even 99 per cent slashed off the retail prices.

There are no set days for markdowns as products go out of date constantly – but bargain hunters say the best times to shop are either first thing in the morning or shortly before closing time.

Families are waiting for the right time to do their shop so they could save a fortune off their grocery bills – as stores slash prices off perishables in a bid to sell whatever they can before binning it or donating to charities.

While special offers vary from store to store, the mother was adamant the best discounts are almost always found in the early evening, when staff slash prices on produce due to expire the following day.

‘It depends on the store, but I find that around 4pm to 6pm is a really common time for many supermarkets,’ another shopper agreed.

‘It gives them enough time to sell specials before closing time – especially if the best before date is that day. And it’s often when new stock is coming in and they need to make room.’

But others claimed the most lucrative bargains can be found first thing in the morning or shortly before closing time – around 10pm.

Tens of thousands of Australian families wait for the right time to shop so they can save a fortune as stores slash prices off perishables in a bid to sell whatever they can before binning or donating it to charity. 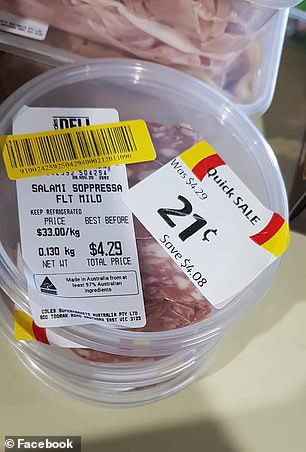 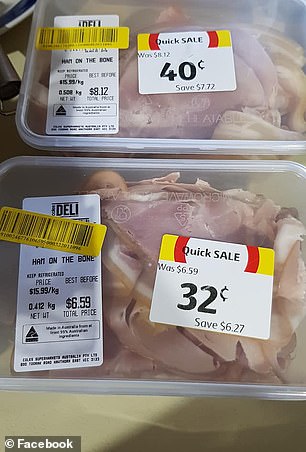 While special offers vary from store to store, the mother was adamant the best discounts are almost always found in the early evening, when staff slash prices on produce due to expire the following day

The Markdown Addicts Australia Facebook page has grown into a vibrant community of bargain-hunting shoppers since it was founded by Sydney mother-of-three Kimberley Bertram in 2019.

The private group, which now has 202,000 members, is a place for frugal Australians shoppers to share their own supermarket deals and grocery ‘hauls’.

On the back of its widespread success, Ms Bertram in January launched an online store of the same name which aggregates supermarket deals as well as special discounts, coupons, money-saving tips and recipes.

The website, which you need to register to join, has sections for beauty, clothing, and electronics, along with groceries, toys and pet accessories.

Biden Fractures Foot Playing With His Dog, Putting Him in a Boot