SEBASTIAN SHAKESPEARE: After arson at mansion, a rave king raises it from the ashes

Four and a half years ago, Parnham House in Dorset was reduced by fire to a smouldering shell — a catastrophe followed by the arrest of its owner, Austrian banker Michael Treichl, for suspected arson, and his subsequent death by drowning in Lake Geneva.

But what promises to be one of Britain’s most daring and innovative architectural resurrections is now in hand thanks to the man dubbed ‘the new Leonardo of design’.

Thomas Heatherwick is the creator of the stunning cauldron at the 2012 London Olympics, as well as an array of buildings and bridges around the world. 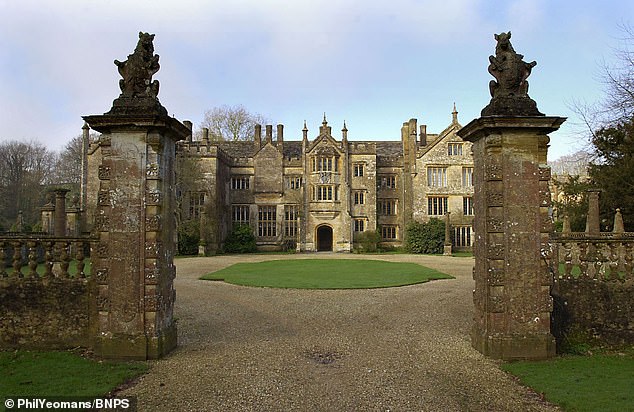 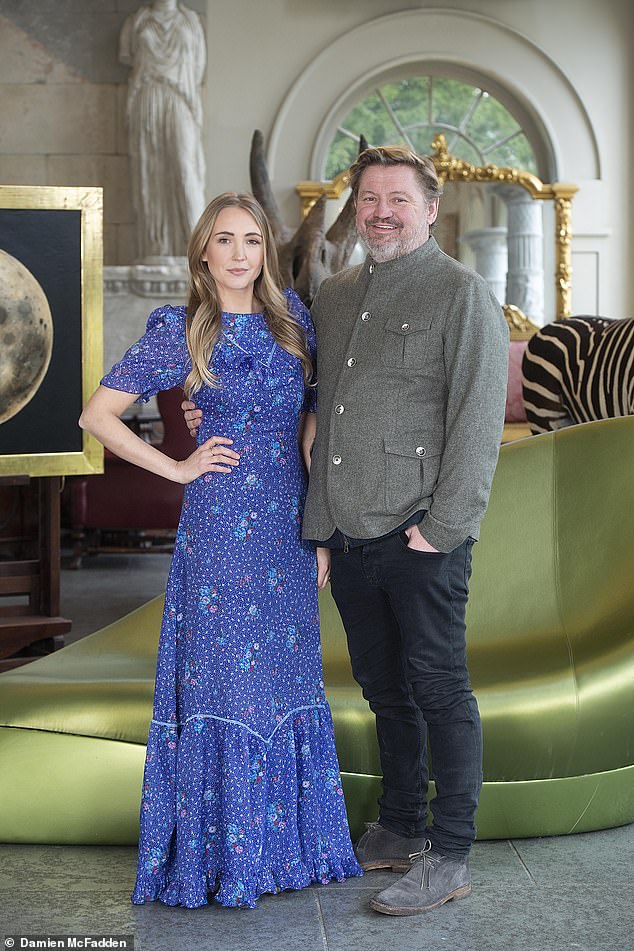 He has, I can disclose, been invited to ‘reinvent a new future’ for Parnham by James Perkins, former rave scene host-turned-restorer of historic houses, who acquired the smoke-blackened husk and its surrounding 131 acres last year for £2.5 million.

‘I’ve known Thomas for 12 years,’ Perkins, 51, tells me. ‘He’s innovative in his way and I am in mine. You are going to have this really traditional, old-school-looking house, with a 16-century facade. But the idea is that the inside’s not as it appears on the outside. It’s going to have all sorts of technology behind it.

‘The house and the restoration are ‘Batman-inspired’,’ he adds, explaining that he also finds inspiration in the Arthurian legend — and in Indiana Jones. 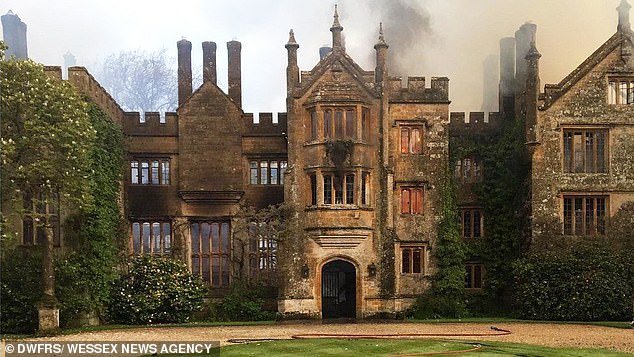 The 2017 catastrophe was followed by the arrest of the home’s owner, Austrian banker Michael Treichl, for suspected arson, and his subsequent death by drowning in Lake Geneva

Perkins and his wife Sophie Taylor previously owned Aynhoe Park in Oxfordshire, which was hired by Noel Gallagher for his 50th and, last Christmas, by Cara Delevingne and family for a lavish party.

Parnham will stimulate all generations, with Perkins explaining that he is talking to someone who’s ‘going to build some incredibly different tree houses’ and to somebody else ‘about building a telescope’ to take advantage of what he describes as Dorset’s ‘fantastic lack of light pollution’.

‘People wondered what happened at Parnham in recent years, with the previous owner, who was very private,’ he reflects. ‘We’re going to be the opposite.’

‘I’m very happy for him getting married again,’ says Ben, who rowed across the Atlantic with the double gold medallist. 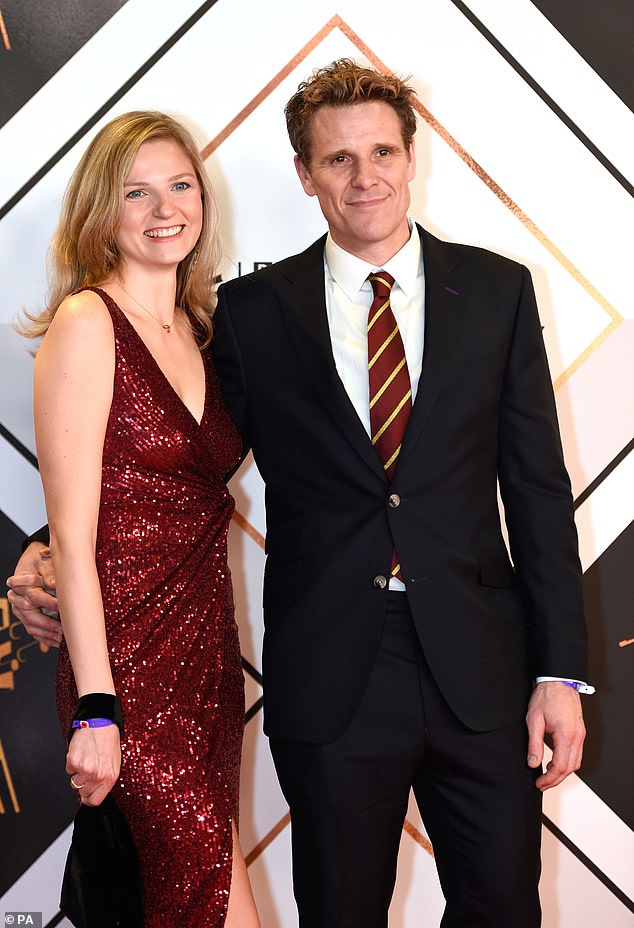 ‘I’ve met Jordan a few times, although obviously not for a long time due to the pandemic, and I think they work really well together.’

Cracknell, 48, met Connell, 35, when he studied at Cambridge University in 2018 and they got engaged earlier this year.

TV adventurer Ben — whose documentary, Inside Chernobyl, is on Channel 5 tomorrow — tells me of his old friend: ‘I don’t know if he’s going to have a best man or anything.

‘I think they are going for a more intimate affair, put it that way. But watch this space.’

Mission Impossible star Simon Pegg admits he’s been told off by his mother, former civil servant Gillian Smith, for swearing too much.

‘I was getting a little bit of blowback for the amount of swearing on my Instagram stories, which is fine, because I like swearing,’ he says. ‘My mum’s cool, but she was like: ‘You swear a lot.’ I said: ‘Mum, swearing is a valuable catharsis which exists across the lexicon of every spoken language across the world. It’s an act of liberation.’

‘In the English language, at least, profanity is the tussle with our more basic functions and desires.

I think he got off lightly…

Supermodel Karen Elson is ready to give back to younger generations by launching a mentoring service. 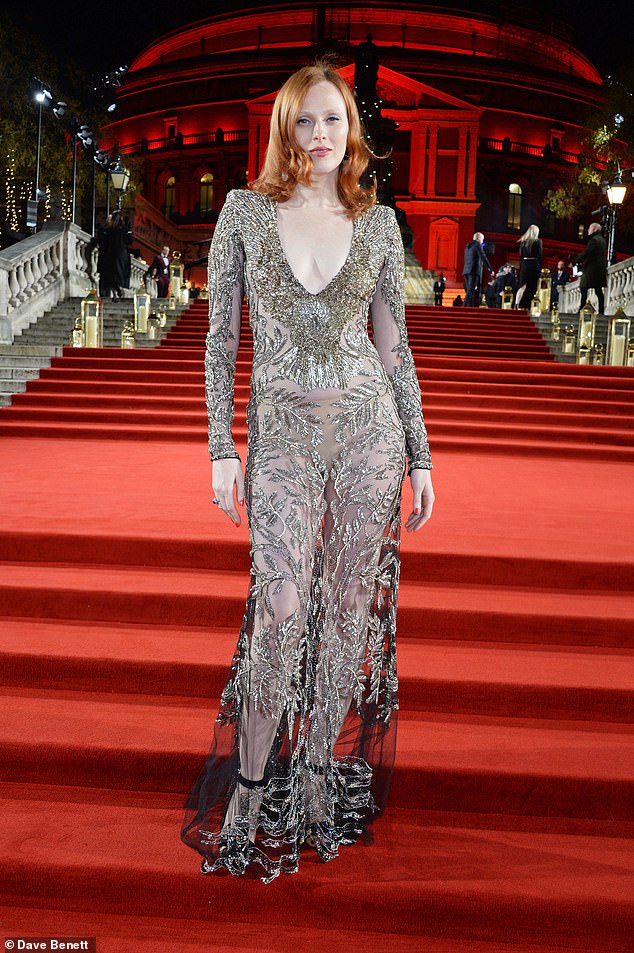 ‘There is such a need for support and guidance within the industry, and often that’s hard to come by,’ explains the Lancastrian, 42. ‘So I started toying with the idea of The Model Mentor.’

The Vogue cover star, who struggled with an eating disorder at the height of catwalk fame, says her first online meeting will tackle body image.

Actress Natascha McElhone, the stepdaughter of former Fleet Street editor Roy Greenslade who has revealed his long-held support for the IRA, is no stranger to the Troubles.

She played a Belfast IRA operative in the Hollywood thriller Ronin and was much criticised for not getting the accent right. But then, she was brought up by Greenslade and her Irish mother in Brighton and attended Camden School for Girls.

She also played an Irish-American IRA sympathiser in The Devil’s Own.

Cindy Crawford’s model daughter, Kaia Gerber, has been making sure to nurture her more cerebral side during lockdown.

The Stella McCartney campaign star has shared a picture of herself and her golden retreiver puppy playing chess in California. 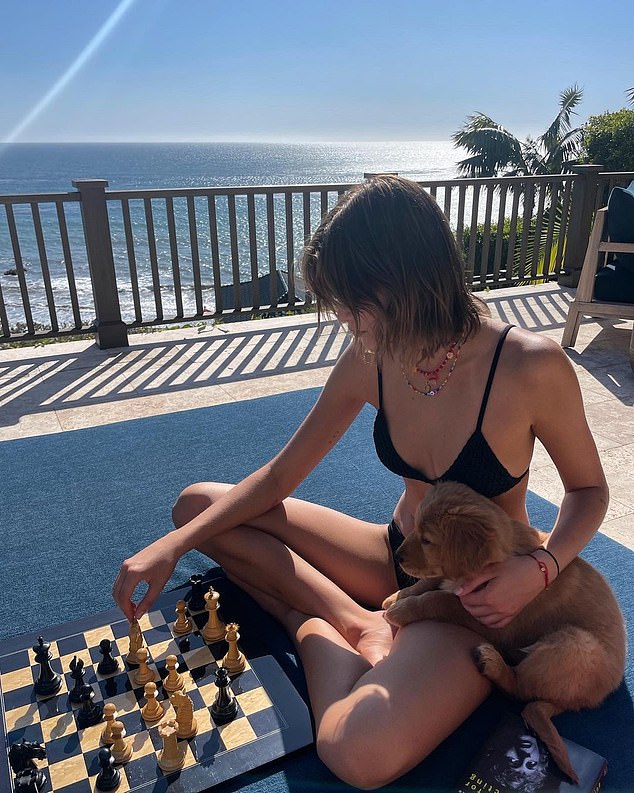 Cindy Crawford’s model daughter, Kaia Gerber, shared a picture of herself and her golden retreiver puppy playing chess in California

Kaia, 19, has also been learning guitar from her father, former model Rande Gerber, and leading a book club online.

‘I know we are all feeling isolated, so I was trying to think of easy ways we can stay connected,’ she says of the latter.

The Duchess of Sussex is due to give birth later this year but she and Prince Harry can already line up a playmate.

They have paid homage to Lady Anne, who died last year aged 99, by naming their daughter Isabella Anne. ‘It’s a very touching tribute,’ says a friend.

SEBASTIAN SHAKESPEARE: Riddle of a Little Owl’s death on the Queen’s estate