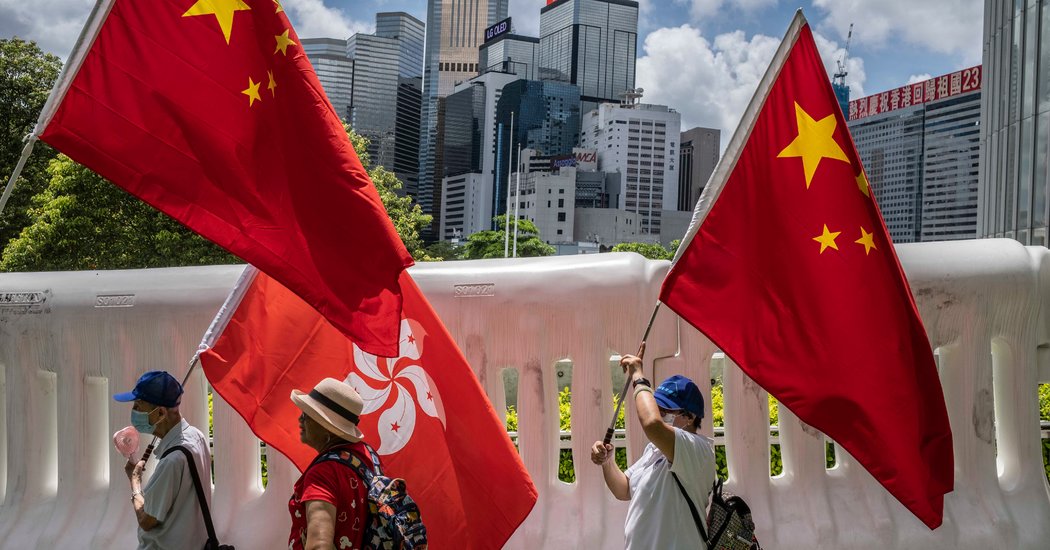 WASHINGTON — The Senate on Thursday unanimously passed legislation to impose sanctions on Chinese officials trying to stamp out political dissent in Hong Kong, sending the measure to President Trump’s desk for his signature.

The passage of the bill, spearheaded by Senators Patrick J. Toomey, Republican of Pennsylvania, and Chris Van Hollen, Democrat of Maryland, comes days after Chinese leaders imposed a sweeping new security law intended to quell protests demanding free elections and greater autonomy in an escalation of Beijing’s campaign to tighten its grip on Hong Kong.

“It’s not only an effort to shield freedom-loving Hong Kongers from this continuing escalation of aggression by the Chinese communists, but the bill is a larger signal to China,” Mr. Toomey said. “It’s a message that the United States and the free world are no longer willing to look past some of the worst behavior that’s been occurring. It’s a message that our patience has run out.”

The measure, which passed without debate or a formal vote on Thursday, would place mandatory penalties on the Chinese officials who imposed the security law, as well as police units that crack down on protesters and the banks that finance activities trying to undermine Hong Kong’s independence.

The House unanimously passed the bill on Wednesday, with Speaker Nancy Pelosi praising it as “another important step toward ending China’s accelerating campaign of suppression, intimidation and cruelty waged against the people of Hong Kong.”

The White House has not said whether it would support the measure, and in the past it has shied away from imposing sanctions on Beijing for fear that doing so would spoil Mr. Trump’s efforts to secure a trade deal with China. But Secretary of State Mike Pompeo, a China hawk, has bitterly condemned the security law, as the new rules’ chilling effect in Hong Kong has become immediately clear. The police arrested more than 300 pro-democracy protesters on Wednesday, including a 15-year-old girl waving an independence flag.

“The United States will not stand idly by while China swallows Hong Kong into its authoritarian maw,” Mr. Pompeo said in a statement.

Lawmakers in both political parties have increasingly pressed the Trump administration to challenge China on a litany of abuses, mustering a veto-proof majority in May to pass legislation to punish top Chinese officials for detaining more than one million Muslims in internment camps. Last fall, Congress unanimously passed legislation supporting the Hong Kong protests. That forced Mr. Trump, who had previously said he was “standing with” Xi Jinping, the Chinese president, to sign the bill, though he added he would “exercise executive discretion” in enforcing it.

China hawks, who have become ascendant across Congress and in the administration, have shown little patience on the issue of Hong Kong and were infuriated by the imposition of the new national security law. The Senate on Wednesday also unanimously passed legislation by Senator Josh Hawley, Republican of Missouri, that called the imposition of the new Chinese statute a “direct violation” of the 1984 declaration affirming Hong Kong’s high degree of autonomy.

Plan to double maximum sentence for attacks on 999 emergency workers

Democrats, and Even Some Republicans, Cheer as Justices Spurn Trump

Superheroes and an Indoor Fund-Raiser: 5 Takeaways From the Mayor’s Race

We tested nine top-rated yoga mats. These five stood out