Serge Gnabry on winning the Champions League in front of no fans and trying to emulate Real Madrid.

Serge Gnabry, David Alaba and Joshua Kimmich sat on the pitch at the Stadium of Light in the aftermath of what is normally the highlight of a player’s career.

Bayern Munich had just beaten Paris St Germain in the Champions League final, the euphoria of the 8-2 victory over Barcelona in the quarter finals still fresh in the mind, as were Gnabry’s goal’s in the 3-0 semi-final win over Lyon.

Around them, amidst the echoes of an empty stadium populated only by club staff, was an eeriness not associated with such euphoric moments; no friendly faces to pick out in the crowd, the family and friends who had stuck with you through the lean years; no fans with whom to party. 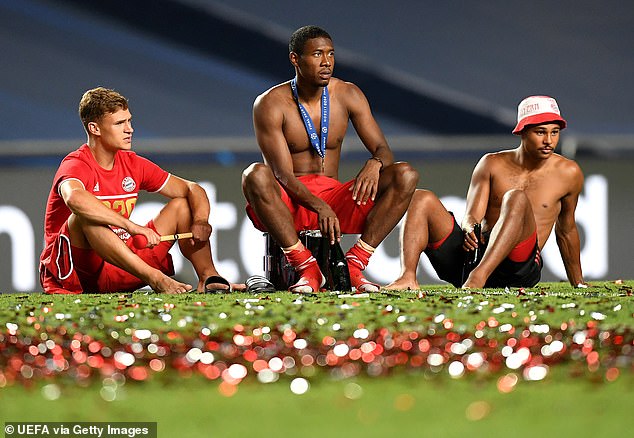 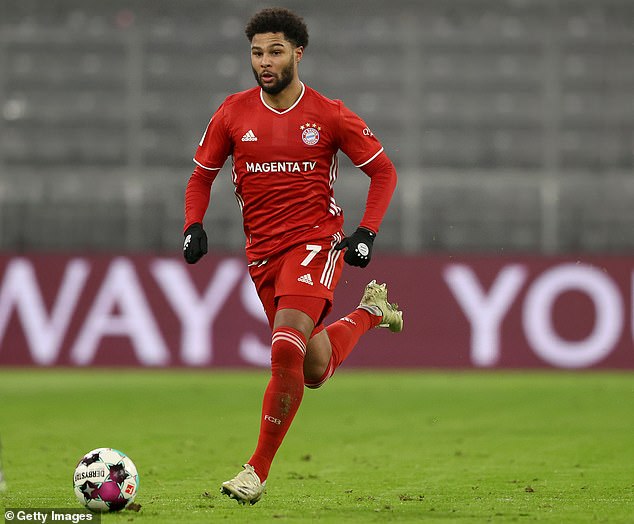 Gnabry has become one of the best players in world football, and wants to continue his form

There was just the quiet satisfaction of a job well done. ‘After the game I remember me, David and Joshua were just sitting on the centre circle and just looking around,’ says Gnabry, speaking to The Mail on Sunday via Zoom from Munich’s training ground last week.

It was glaringly obvious what was missing. ‘Fans, family, everyone that means something to you,’ continues Gnabry.

Still, even amidst a pandemic, a Champions League win is something to celebrate, even if it was a private party within the players’ bubble. ‘Just to spend the time with these guys is incredible, if you’ve been working with those guys for a whole year and then you can finally celebrate…’ 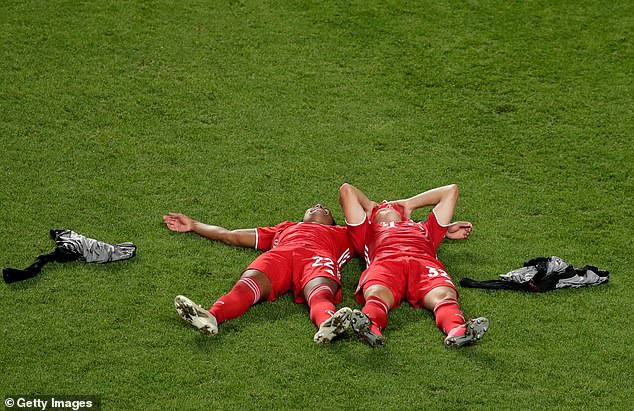 There’s the rub. This Bayern team, top of the Bundesliga again and cruising through the group stages of the Champions League, look ready to swat aside less-consistent English opposition again this year. Asked whether Bayern need to make the most of this moment and this extraordinary team.

Gnabry says: ‘I think that’s a very, very good point. I also believe in this. We have a team at the moment that’s filled with so much talent, so much character, so much drive… Our aim is or will be to win the Champions League as many times as we can, whilst we are at that peak. Maybe like Barcelona or Real Madrid, who won it three times in a row. We want do the same things.

‘Hopefully in a couple of years [at the end of your career], to know that you’ve made history is something no one can take from you. And looking back at the trophies and especially the memories that you’ve had lifting the trophy, winning, seeing the team, spending time with your mates, those are things that I want to remember when I finish my career.’

He’s not one to eschew the tag of favourites for this season with a display of false modesty when asked if Bayern look best placed to win again. ‘This season? Yes, I think so. The confidence we have by winning it last year to be sure gives us another boost and the way we’re playing, the way we don’t give up. We’re hungry [but] we all know it’s difficult.’

Of course, should Bayern, who face Lazio in the last 16 next month, win again they will start to bear comparison to the greatest Bayern team of all time, the team of Franz Beckenbauer, Uli Hoeness, Gerd Muller and Sepp Maier, which won three successive European Cups from 1974- 1976. 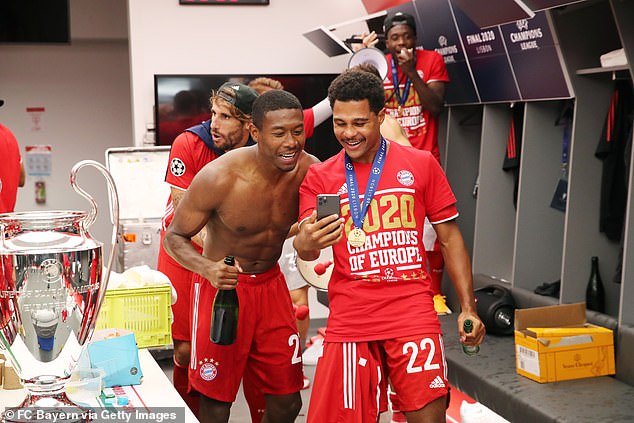 For Gnabry, 25, though it may be in the dim and distant past, it remains a goal. ‘I didn’t even know to be honest! I wasn’t even born. But yeah we have the time ahead and hopefully also in 30 or 40 years’ time people will say my name, will say the names of the guys on the team. That would be something great.’

It’s hard to get past Gnabry’s phenomenal success and his status as one of the best players in world football without mentioning Tony Pulis. Gnabry was best-known initially for being one of Arsene Wenger’s fringe Euro kids, signed from Stuttgart at 16, and playing the odd Premier League and League Cup game.

His loan spell at West Brom under Pulis, when he was 20 in 2015, merited just twelve minutes of time in the Premier League over five months. Pulis has since explained that he simply didn’t feel the winger was physically ready for Premier League action. And to be fair, as a loanee, West Brom weren’t investing in him long term. They had Premier League survival to secure.

But it’s hard to reconcile the player now with the young man who couldn’t get a game at the Hawthorns, nor for Arsenal once he returned to his parent club. He moved to Hoffenheim in 2016, though Arsenal did want him to stay.

‘It was a very important time in my career, where I had to learn and accept a lot of things as well, said Gnabry. ‘It made me a tougher guy on the pitch. When you’re younger, maybe talent was enough and just enjoying [yourself] and having fun. Then I realised it’s also hard work and things don’t go your way. 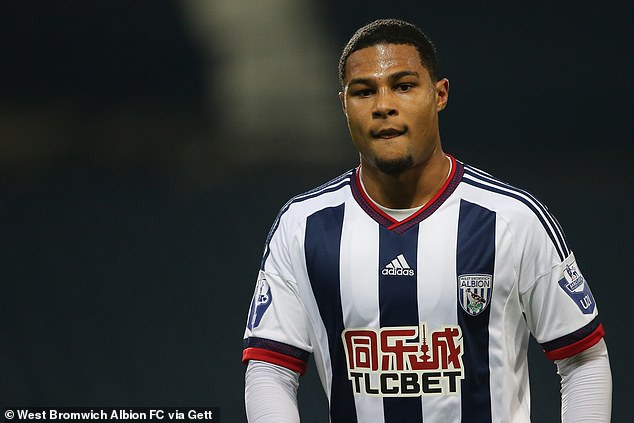 ‘It didn’t go well at West Brom but I just kept working and that’s one of things I adopted: always keep working and knowing when I go home. I’ve always believed in my qualities. If someone else doesn’t what can I do?

‘At the end of day, if I didn’t go to West Brom, if it didn’t go how it did, I wouldn’t be here at Bayern Munich now, I wouldn’t be Champions League winner, I wouldn’t have had five trophies in one season and be playing, I think, in the best team in the world, football wise. In the end I can say it helped me a lot on my road to become who I am. And that’s the story.’

His sights are now set somewhat higher than making the West Brom starting eleven ‘I think for myself the ambition is to become better and better, to get into a FIFA World XI and in the end, you never know …. I think every footballer aims for the Ballon D’Or.’

He also is comfortable with the increasingly political role that footballers have taken through a tumultuous 2020. And gives a reasoned account of why the Black Lives Matter movement, (as distinct from the political party) was embraced by footballers in the wake of the killing of a black man, George Floyd, by white police officers.

‘It is because of history. All lives are important but I think the biggest role played is by history, by slavery -and it [taking the knee] is just a gesture about that. I don’t think it is saying “These lives are more important than other lives”. If you ask people, I don’t think these things would have happened if it was the other way round. 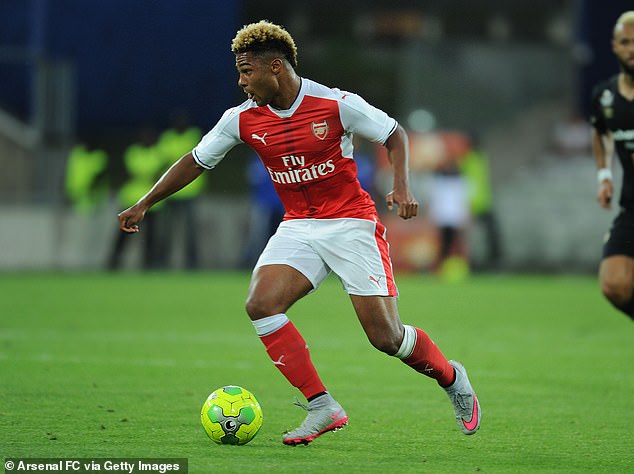 ‘Could have. No one knows. It would also be tragic if a black guy killed a white guy for nothing. It’s not like it doesn’t mean anything but it’s just a gesture, that we should think about history.’

He is good to his word in that he is taking time to understand his own roots. His father, Jean-Hermann, is originally for the Ivory Coast, a country Gnarby liked to visit regularly before the pandemic and plans to spend more time in post coronavirus, to get to know his wider family better.

He credits his move to Arsenal at 16, which would now be impossible because of Brexit, with opening his mind to the wider world. He lists the benefits that moving countries at such a young age accrued for him.

‘Taking a big risk. Growing as a person. Growing as a footballer. Taking on new challenges and being away from my comfort zone, from my family my friends and my school. I think it helped me grow quicker as a person. It made me much tougher. 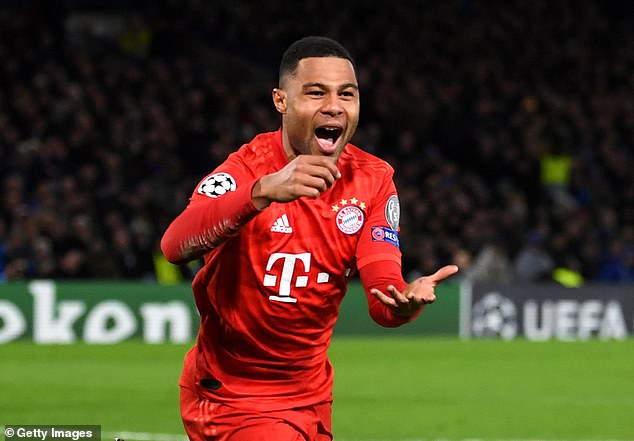 Now at Bayern, he is playing well and also putting in work to help the German national team

Meanwhile, at Bayern he has some important work to put in to help the German national side. A team-mate now is Jamal Musiala, the 17 year old who was born in Germany but lived much of his life in England at Chelsea and is now at the centre of a tug of war between the two nations for his allegiances.

Musiala has been breaking records as youngest Bayern player and scorer in recent months, seeming remarkably at home amongst elite senior football. England is calling but Gnabry light-heartedly interjects: ‘Ain’t no chance we’re letting that talent go! I’m trying my best [to get him for Germany]. He’s a great, great player. The first couple of times he showed up in training we already knew he was going to be a superb player.

‘His talent is amazing. He isn’t shy of anything. He has a lot of time on his hands and I hope he will continue to grow, and use his talents for Germany instead of England – to my benefit!’

Limited-Time Free Trial! Keep Your Health on Track at Home With Noom

Milan bounce back from Juventus defeat to reignite title charge

Silva hopes to challenge Barcelona and Real Madrid for silverware

FLASHBACK: ‘Where Are The Cows? Is Evans A Herdsman?’ — When Tinubu Spoke On Murder Of Fasoranti’s Daughter