Sergio Aguero reveals he has tested positive for Covid-19

Sergio Aguero‘s nightmare season took another turn for the worse on Thursday when the Manchester City striker revealed he has tested positive for Covid-19.

The 32-year-old Argentine had been self-isolating since January 10 after coming into close contact with someone who had contracted the virus and has now tested positive just days before his quarantine period was due to be over.

Aguero, who has made just three starts this season due to a knee injury and none since October, will now enter another two-week period of isolation and must return a negative test before he can return to action. 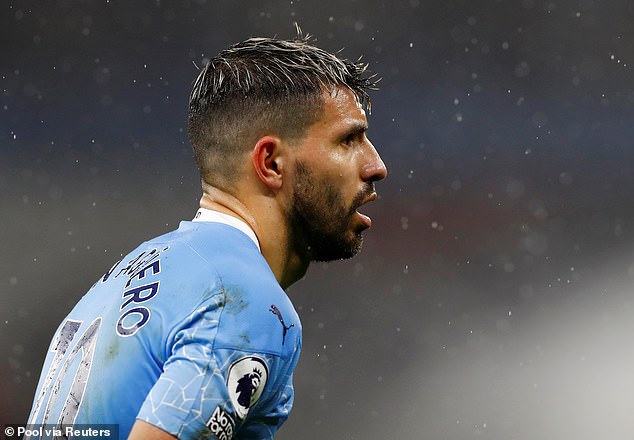 Aguero tweeted on Thursday: ‘After a close contact, I’ve been self-isolating and the latest test I took was positive for COVID 19. I had some symptoms and I’m following doctor’s orders for recovery. Take care, everyone!’

City were hoping that Aguero would be able to return against West Brom on Tuesday night, having had a previously pencilled in return date against Birmingham earlier this month scrapped because of his original isolation period.

The news comes as a blow to City manager Pep Guardiola, who was hoping Aguero’s return would give them a boost in their title bid, with his side now favourites to win the Premier League.

City sit in second place, just two points behind Manchester United with a game in hand, but have missed Aguero’s goals this season and often played without a recognised striker in his absence.

Having broken the 20-goal mark in each of the last seven seasons, Aguero is stuck on just two goals from nine matches in all competitions in what could be his final season at the club.

Speaking earlier this week, Guardiola spoke of how desperate he was to have Aguero back in his side. ‘We miss him,’ he said. ‘The numbers speak for themselves. He is the best striker in our history. We need Aguero.’