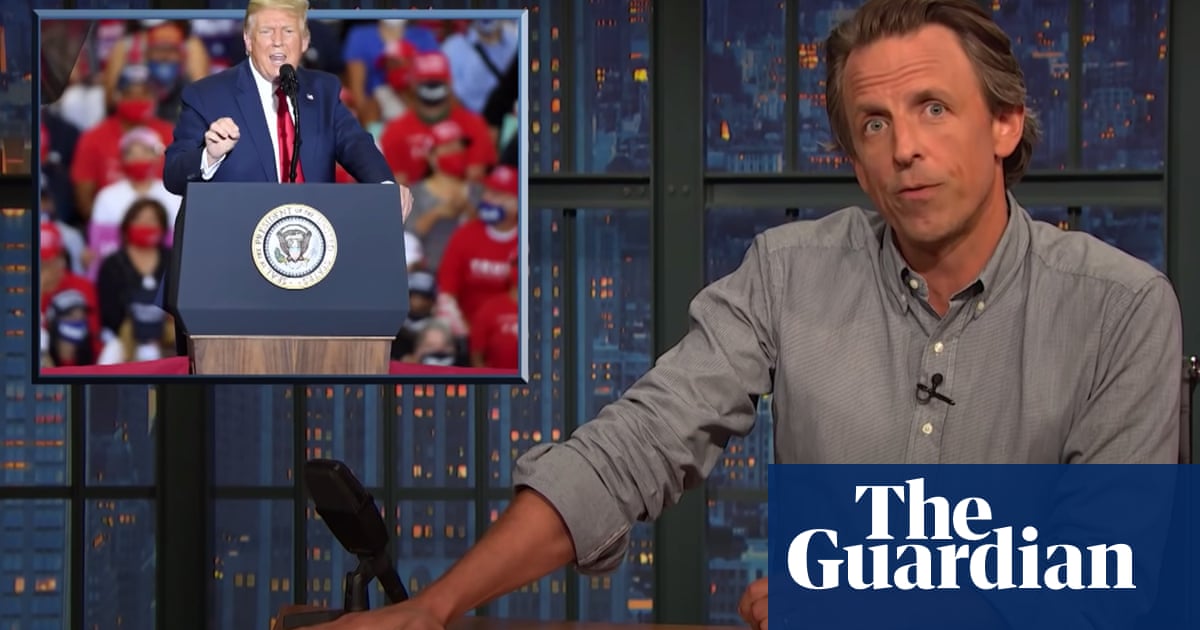 For the first time since his Tulsa, Oklahoma, rally was blamed for a coronavirus outbreak in June, Donald Trump held his first indoor rally last weekend – a scene of a thousand acts of potential coronavirus spread, from chanting to singing to mask-less faces packed together. “If you were actively trying to get people sick, this is how you would do it,” said Seth Meyers of the Nevada rally, held in violation of the state’s Covid restrictions.

“The only way he could spread the virus more efficiently is to hold a rally at a meatpacking plant and charge one french kiss for admission,” the Late Night host added. “At his next rally, there’s gonna be one Make America Great Again Kleenex that everyone has to share.”

Meyers also touched on the devastating fires in the western United States, which have burned more than 3m acres in California alone, forced the evacuation of 40,000 in Oregon and turned the sky over San Francisco an eerie, Blade Runner-esque shade of orange. “The apocalyptic nature of the Trump era has been on the nose in many ways, but even I never thought we’d have to lock ourselves inside, wear face masks while the sky turns blood red,” said Meyers. “I feel like we’re in a YA novel.”

Meyers on Woodward tapes: Trump is ‘dumb enough to confess something so cartoonishly evil’

So as coronavirus case numbers rose again in 11 states and historic wildfires, supercharged by the climate crisis, raged, what was the president doing? “Watching hours and hours of Fox News,” reported Meyers. In a press conference last Thursday, Trump rattled off to reporters a list of Fox News programs he consumed the day before, and called their information value “really an amazing thing”.

“Were you stuck overnight in an airport? No one should watch that much Fox News in one sitting,” Meyers responded. “That’s like telling your doctor you smoke once a day but you cram 50 cigarettes in your mouth at once.”

Returning to the Late Show after two weeks away, Stephen Colbert also addressed the unprecedented wildfires blazing out west. Yet despite the evidence of climate change’s impact, Trump has continued to pretend the science doesn’t exist; Colbert played an extraordinary clip of the president telling the California state natural resources agency secretary, Wade Crowfoot, who pleaded for evidence-based cooperation, that “it will start getting cooler, you just watch”.

“I wish science agreed with you,” Crawfoot replied, to which Trump said: “I don’t think science knows, actually.”

But it “shouldn’t be a surprise that Trump is downplaying the devastating fires out west”, Colbert added. “He spent six months ignoring a pandemic.”

And on the Daily Show, Trevor Noah continued his “pandumbic” series of Americans’ irrational, dangerous responses to the coronavirus.

Noah played body-camera footage from police officers responding to a party at Miami University in Oxford, Ohio, in which a college student tested positive for Covid – a fact he admits to police – and then “quarantined” by hosting upwards of 20 people at his house. “We’re trying to keep this town open,” the officer scolds him. “I know, that’s why I’m staying home,” the student responded, gesturing to the party in his house.

Noah covered his face with his hands – “we’re so screwed,” he said, calling the footage “like playing a virtual reality game called ‘white privilege’”, since the student was “clearly breaking the law”, yet the officer’s tone of voice “sounded like he was telling him today’s specials”.

“How are you gonna call yourself the president of law and order when you’re openly flouting the law?” Noah wondered. “And not even for like a noble reason – no, it’s just so that he could spend 90 minutes ranting about how vegetables were invented by the deep state and Hillary Clinton.”

From college students, to Trump-fanatic grandmas, to the president himself, Americans are “helping this virus continue spreading”, Noah concluded. “But I guess that’s the genius of America’s coronavirus response: unlike other countries that are preparing for the second wave, America realized you don’t have to deal with the second wave if you never get over the first.”

Paris Hilton, 39, reveals she’s ready for motherhood with her boyfriend

People anonymously share the brutal reasons they cheated on their boyfriend

Latitude and Wireless are still set go to ahead, organisers say after Reading and Leeds confirmation