A loving son made his ALS-suffering mother’s final wish come true, by wheeling her onto the dance floor at his wedding and lifting her up for an emotional mother-son dance.

Terri Hightower, 57, from Clarksville, Tennessee, was diagnosed with the degenerative disease ALS – also known as Lou Gehrig’s disease – in December 2019 and by summer 2020, she could no longer walk.

But despite her ailing health, she dreamed of attending her son Scooter’s wedding on October 9 and was surprised when he organised a special mother-son dance for the two of them at the event.

Terri passed away just ten days later, with a clip of the emotional dance quickly going viral online as 10 million people tuned in to watch the special moment. 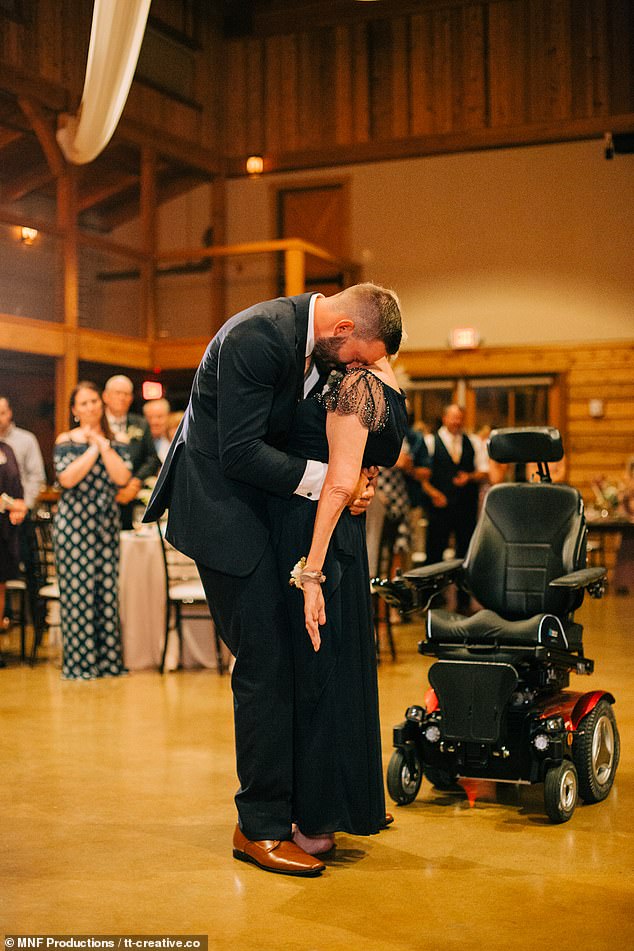 The moment Scooter Hightower, from Tennessee, made his ALS-suffering mother Terri’s final wish come true byy wheeling her onto the dance floor at his wedding and lifting her up for an emotional mother-son dance has gone viral online 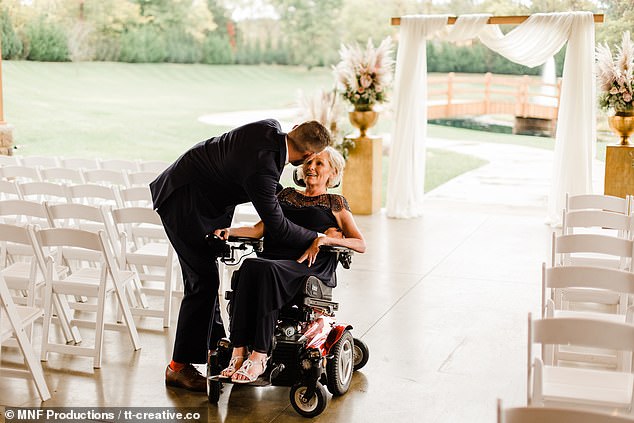 The 57-year-old was diagnosed with the degenerative disease ALS – also known as Lou Gehrig’s disease – in December 2019 and by summer 2020, she could no longer walk 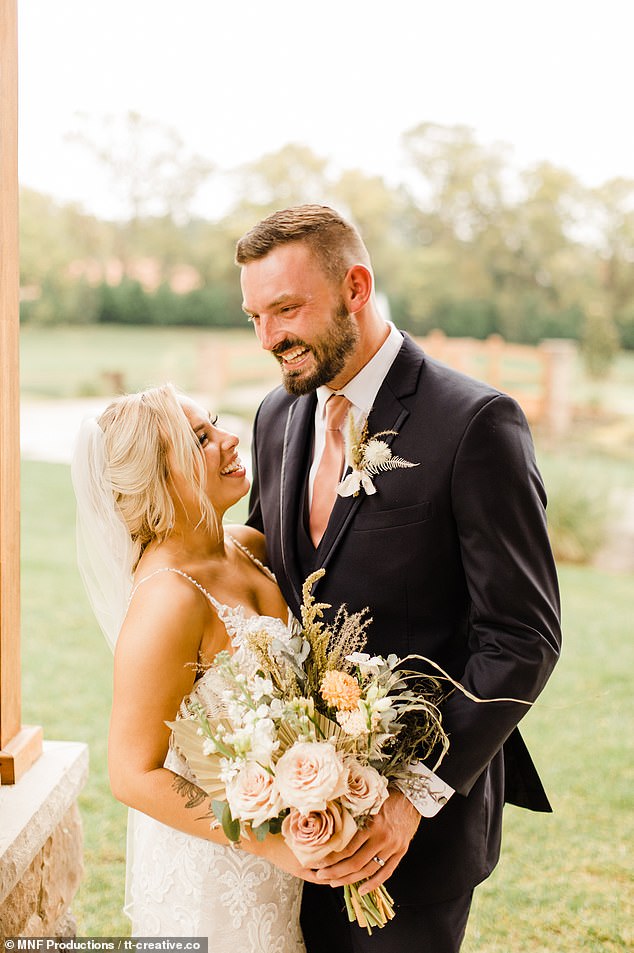 Terri dreamed of attending her son Scooter’s wedding to his partner Afton, 25, in October 2020 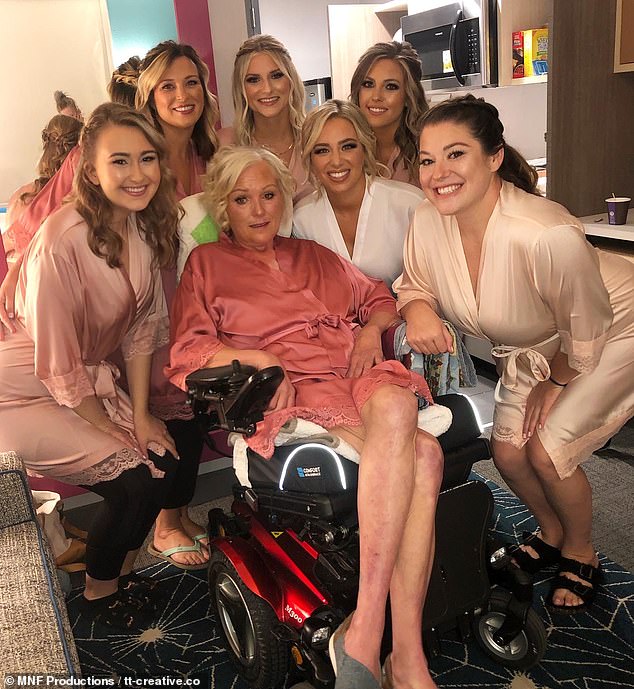 With friends and family gathered around the dance floor, Scooter and his family wheeled his mother’s wheelchair into the middle of the room.

As around 150 guests watched on, Scooter cued the music and, with the help of his father lifted his mother into his arms.

Guests standing around the edge of the dancefloor applauded as Scooter moved her gently and weeping on her shoulder.

He could be seen sobbing and whispering into his mother’s ear as he cradled her in his arms during the emotional dance. 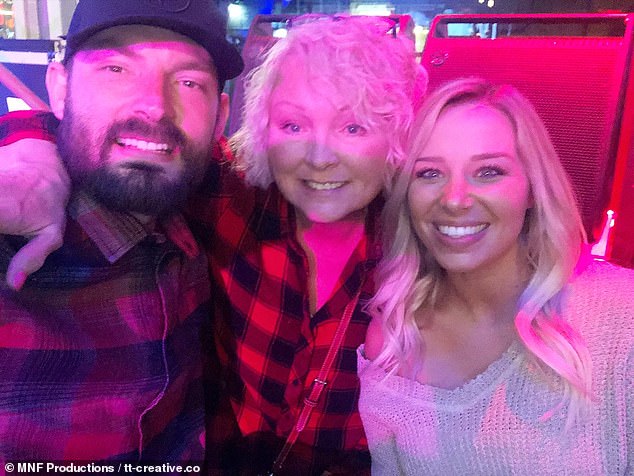 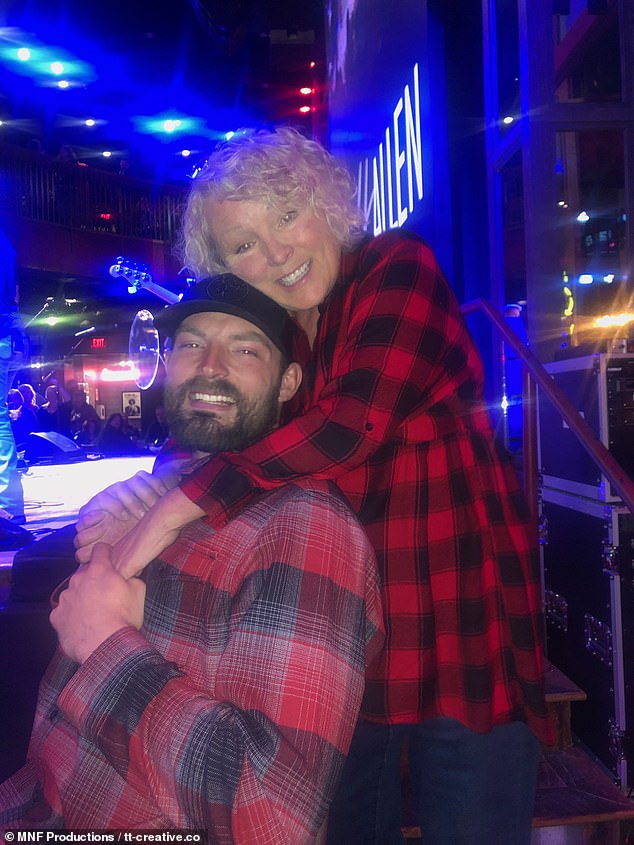 The family said despite her diagnosis with the disease, Terri was still able to ‘feel every emotion possible’

The moment was captured on video by the wedding’s videographer, Neil Fox, and around the room, there was not a dry eye in the house – including Scooter’s wife, Afton, 25, who had helped with the surprise.

Terri died after losing her battle with the disease less than two weeks later,  surrounded by her friends and family.

Hoping to raise awareness for ALS, the family asked Neil to share the video on his Facebook page. The post has since been viewed nearly 10 million times.

Afton said of the response to the video: ‘We are amazed! 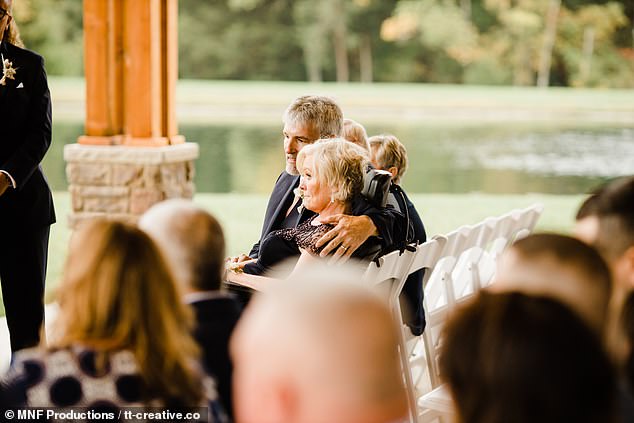 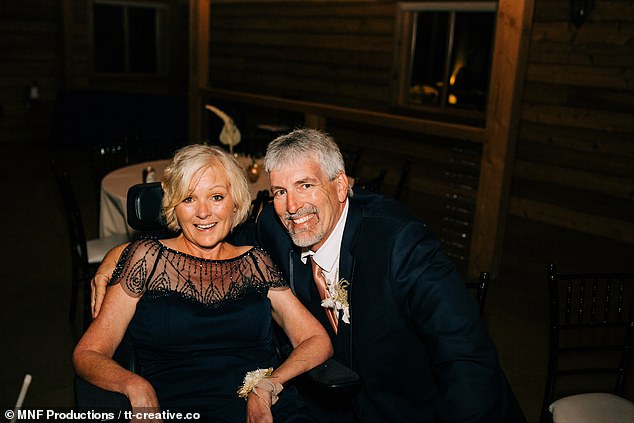 The mother-of-the-groom donned a floor length black gown for the occasion, where she posed for pictures with her husband 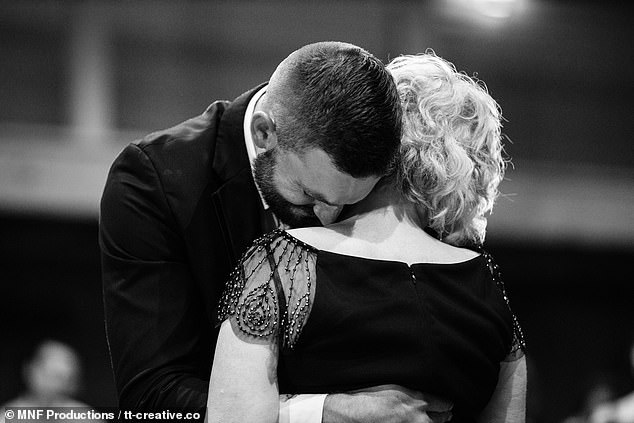 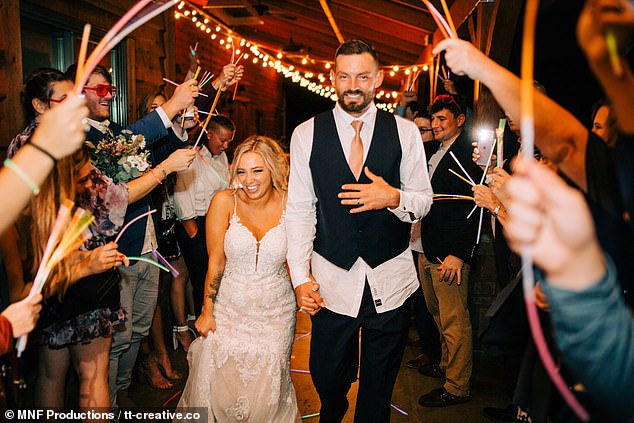 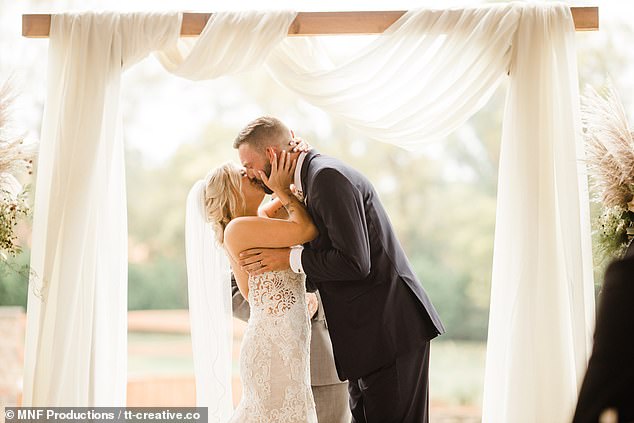 ‘We can’t believe how much of an impact it is making around the world.

‘It is so amazing how many – hundreds, thousands even – have reached out to us showing their love and sympathy. Terri felt every emotion possible.

‘It was a very bittersweet moment, knowing that was her goal and knowing how much it meant to her and Scooter.

‘We hope this video can bring more awareness to ALS.’ 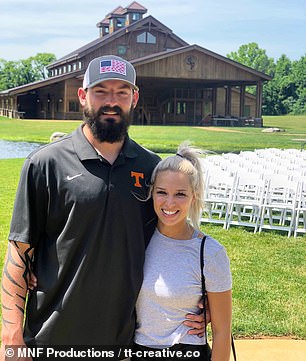 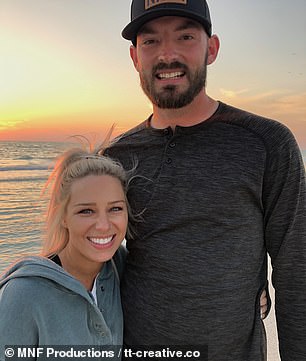 Scooter and Afton went on to share the video clip of the dance online, and said the response had been ‘amazing’ after it was viewed nearly 10 million times 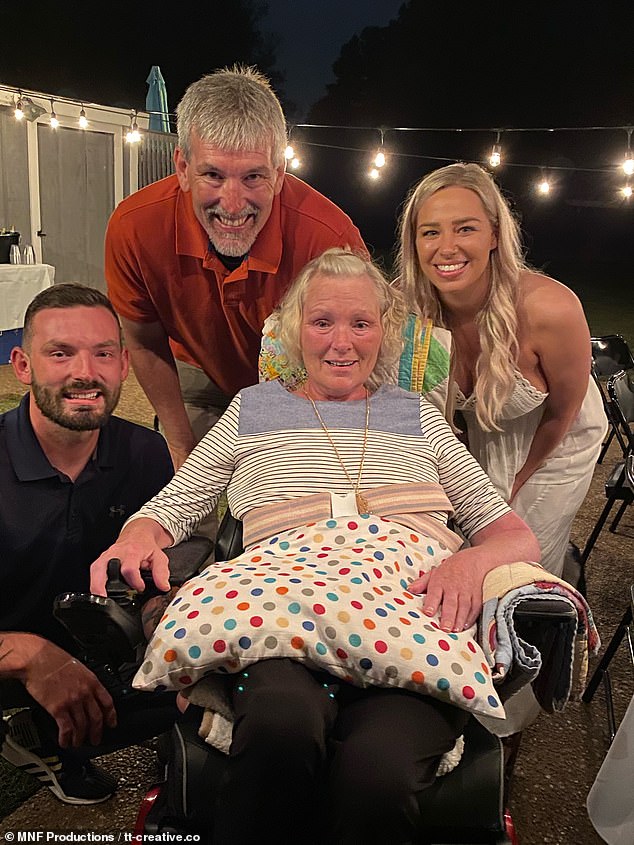 Terri died after losing her battle with the disease less than two weeks after the wedding, surrounded by her friends and family

There is no cure for MND and the disease is fatal, however the disease progresses at different speeds in patients.

People with MND are expected to live two to five years after the symptoms first manifest, although 10 per cent of sufferers live at least 10 years.

The NHS describes motor neurone disease (MND) as: ‘An uncommon condition that affects the brain and nerves. It causes weakness that gets worse over time.’

It was first discovered in 1865 by a French neurologist, Jean-Martin Charcot, hence why MND is sometimes known as Charcot’s disease.

However, according to Oxford University Hospitals: ‘Nearly 90 per cent of patients with MND have the mixed ALS form of the disease, so that the terms MND and ALS are commonly used to mean the same thing.’

Slurred speech is an early symptom and may later worsen to include difficulty swallowing food.

Muscle cramps or twitches are also a symptom, as is weight loss due to leg and arm muscles growing thinner over time.

MND is difficult to diagnose in its early stages because several conditions may cause similar symptoms. There is also no one test used to ascertain its presence.

However, the disease is usually diagnosed through a process of exclusion, whereby diseases that manifest similar symptoms to ALS are excluded.

The NHS says that MND is an ‘uncommon condition’ that predominantly affects older people. However, it caveats that it can affect adults of any age.

The NHS says that, as of yet, ‘it is not yet known why’ the disease happens. The ALS Association says that MND occurs throughout the world ‘with no racial, ethnic or socioeconomic boundaries and can affect anyone’.

It says that war veterans are twice as likely to develop ALS and that men are 20 per cent more likely to get it.

Lou Gehrig was one of baseball’s preeminent stars while playing for the Yankees between 1923 and 1939. Known as ‘The Iron Horse,’ he played in 2,130 consecutive games before ALS forced him to retire. The record was broken by Cal Ripken Jr. in 1995

As well as being known as ALS and Charcot’s disease, MND is frequently referred to as Lou Gehrig’s disease.

Lou Gehrig was a hugely popular baseball player, who played for the New York Yankees between 1923 and 1939.

He was famous for his strength and was nicknamed ‘The Iron Horse’.

His strength, popularity and fame transcended the sport of baseball and the condition adopted the name of the sportsman.

He died two years after his diagnosis.

The best hotels in Norwich city centre, including free parking and stylish rooms

‘We will miss him dearly’: Packers mourn the tragic death of 48-year-old father-of-two