SpaceX’s Starship Serial Number 10 made a soft landing following its first high altitude test, but minutes later after the stood tall on the launch pad it exploded into a ball of flames.

The Elon Musk firm and the world had celebrated Wednesday’s launch, as it was the first prototype that did not crash and burn following the giant ‘hop.’

Details of what sparked the explosion have not yet been revealed.

However, prior to the surprise eruption, the SpaceX team deemed the launch as success because the mission was to gather data on controlling the rocket during re-entry.

SN10 followed the same path of both SN8 and SN9, but unlike the previous two the latest prototype was able to stick the landing.

The world watched at the edge of their seats after the Starship completed the iconic ‘belly flop’ and headed back to the launch pad to swivel itself vertically before touching down.

SN10 soared through the sky, propelled by its three powerful Raptor engines that turned of one by one until a single engine was left.

When the rocket reached the six-mile mark four minutes into its flight, it hovered above the Earth using a single engine before turning on its side for the ‘belly flop.’

As SN10 headed back to the launch pad, it re-orientated itself to land vertically and it touched down as smoke came blowing out from the base – but it has suffered the same fate as its predecessors.

Scroll down for videos 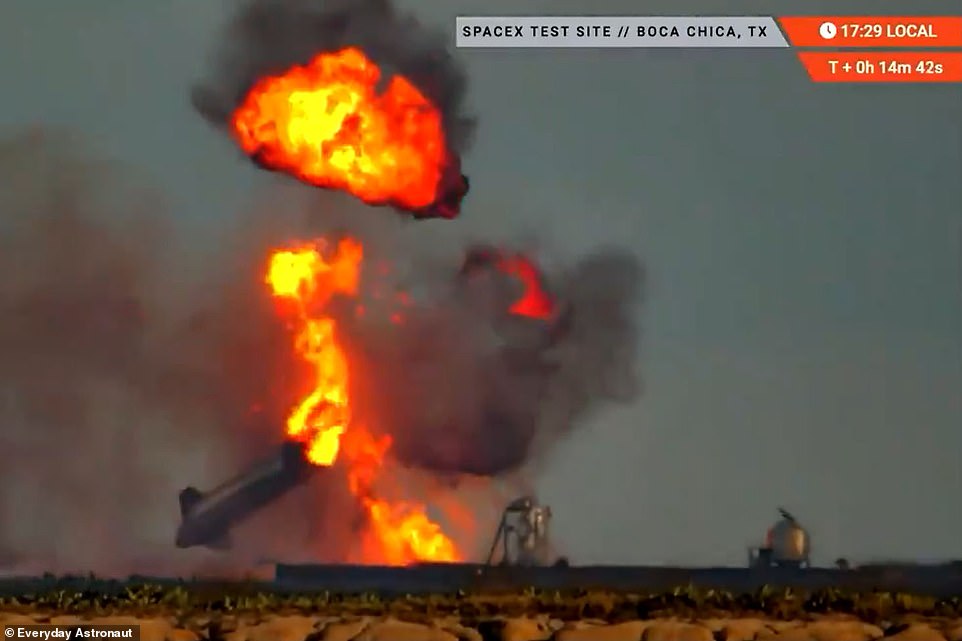 SpaceX’s Starship Serial Number 10 made a soft landing following its first high altitude test, but minutes later after the stood tall on the launch pad it exploded into a ball of flames 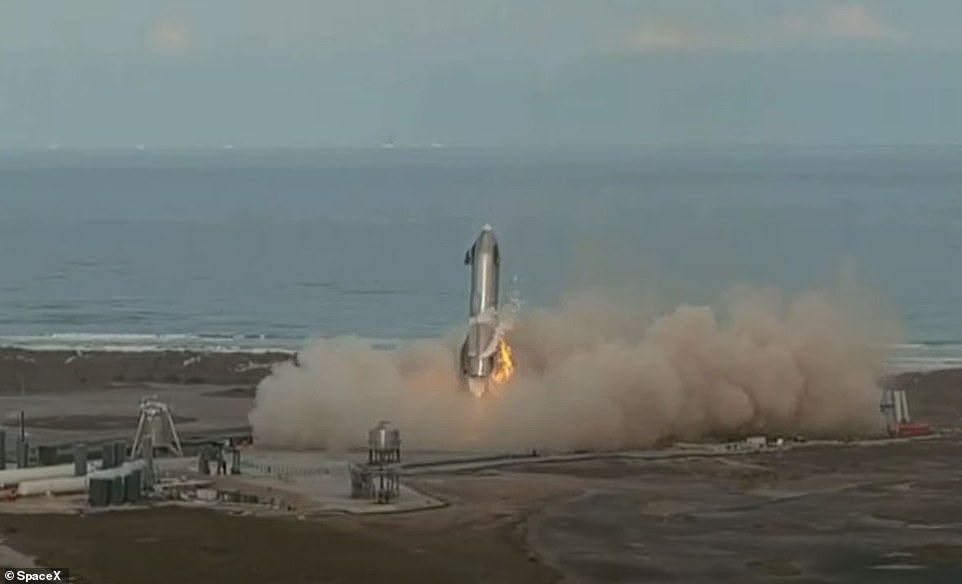 SpaceX’s Starship Serial Number 10 has survived its first high altitude test that sent the massive stainless steal rocket six miles in the air, followed by a ‘soft’ landing on the launch pad

SN10 was patiently waiting on the launch pad all day waiting for its chance to follow in the steps of the SN8 and SN9 prototypes.

The rocket was set to take off at 3:20pm ET, but moments after the rocket ignited its Raptor engines the onboard computers activated an abort due to a detected issue.

The SpaceX team worked quickly detanking and refueling the 165-foot stainless steel vehicle with the hopes that it would take flight later that day – and their wishes were granted.

SN10 followed the same path as its predecessor SN8 and SN9, but unlike the previous two, the latest prototype was able to stick the landing.

The latest prototype reached the six-mile mark four minutes into its flight when it hovered above the Earth using a single engine before turning on its side for the ‘belly hop.’

As SN 10 headed back to the launch pad, it before re-orientating itself to land vertically and touched down as smoke came blowing out from the base – marking the first time SpaceX has successfully landed a Starship prototype. Pictures is moments before SN10 landed 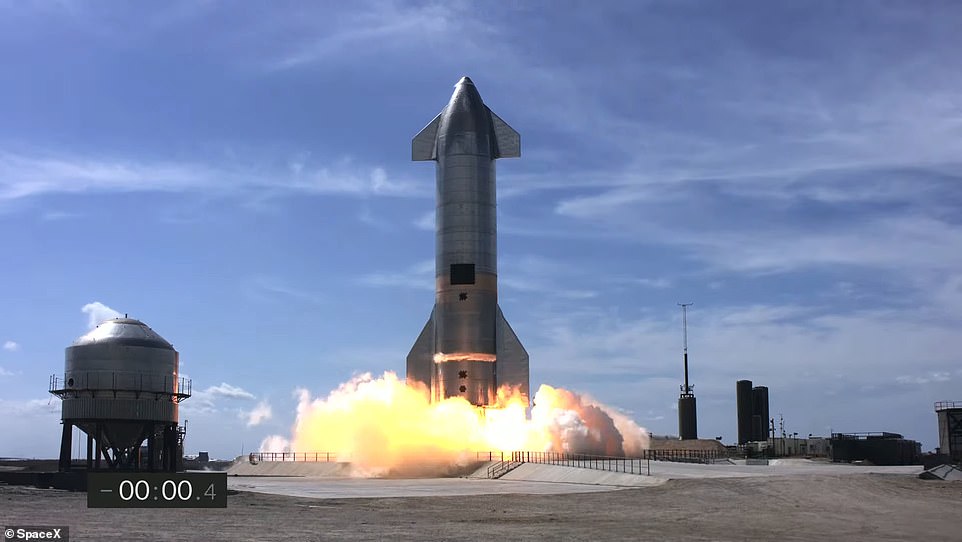 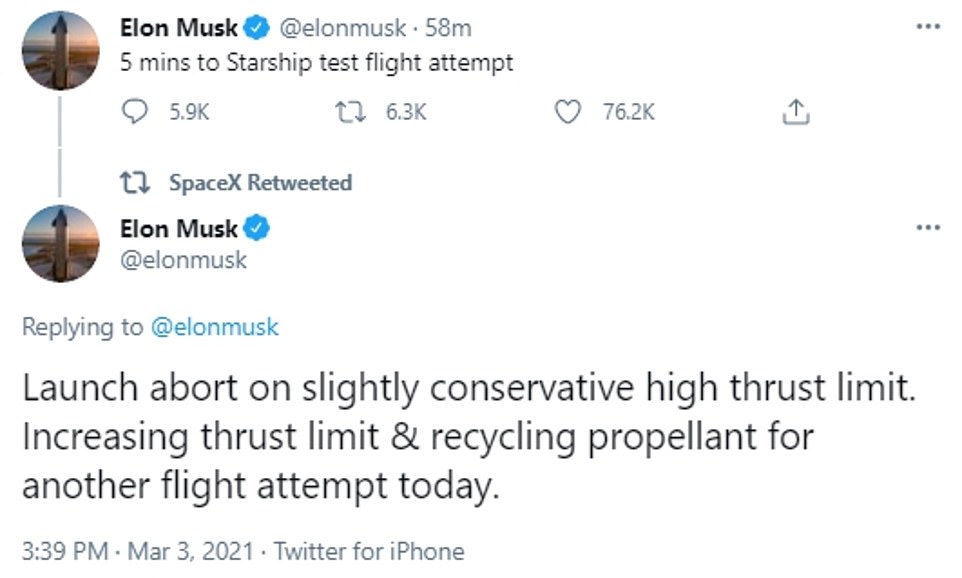 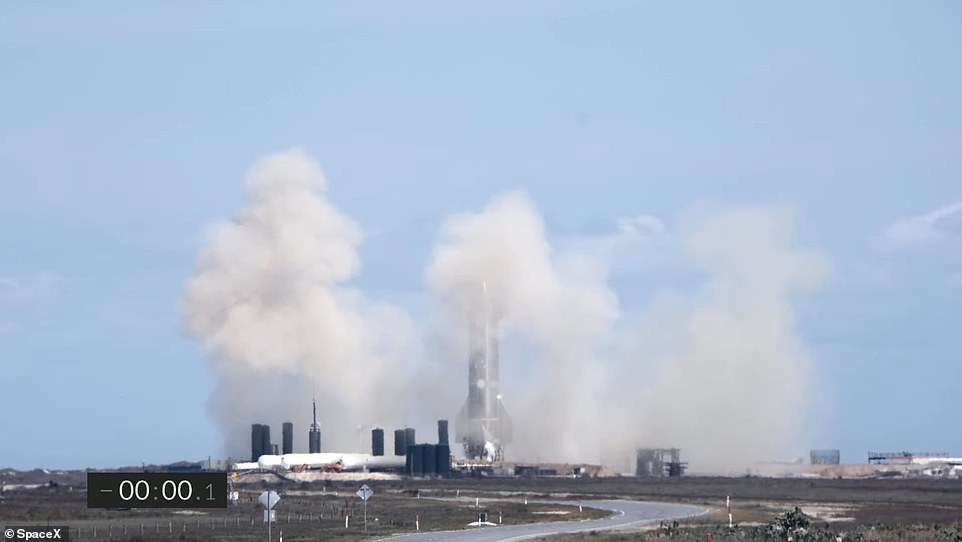 The massive rocket was set to take off from the firm’s testing facility in Boca Chica, Texas following a completion of pre-launch checks – but the 165-foot tall, stainless steel vehicle never left the launch pad 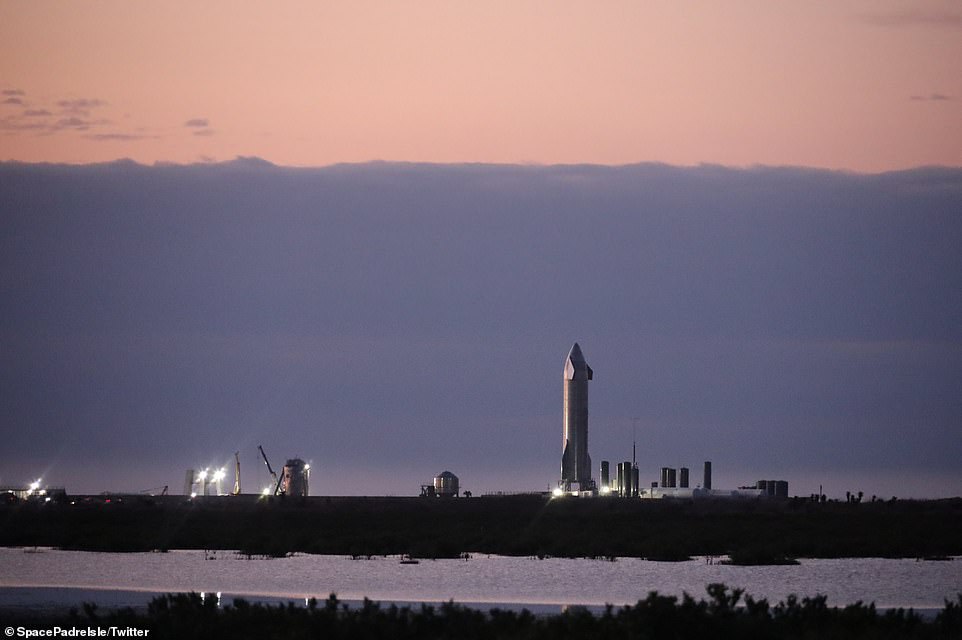 SpaceX is set to send its Starship Serial Number 10 (SN10) for its first high-altitude test, marking the third prototype to take the journey. The Elon Musk-owned company confirmed the ‘hop’ on its website saying the event could kick off ‘as early as Wednesday, March 3′

The vehicle hit the six-mile goal about four minutes into flight and then successfully performed an aerodynamic descent on its side while falling to the earth.

The prototype spacecraft’s ascent lasted for around six minutes before the engines shutdown and SN8 began its journey back down to the launch pad.

The world sat on the edge of their seats as the rocket neared the ground — wondering whether Musk’s prediction of a bumpy landing would prove to be correct.

When Starship finally touched down, it ignited in flames — and, once the fire and smoke had cleared, all that was left was a pile of debris topped by what remained of the craft’s nose cone.

And this crash landing caught the attention of the Federal Aviation Administration (FAA). 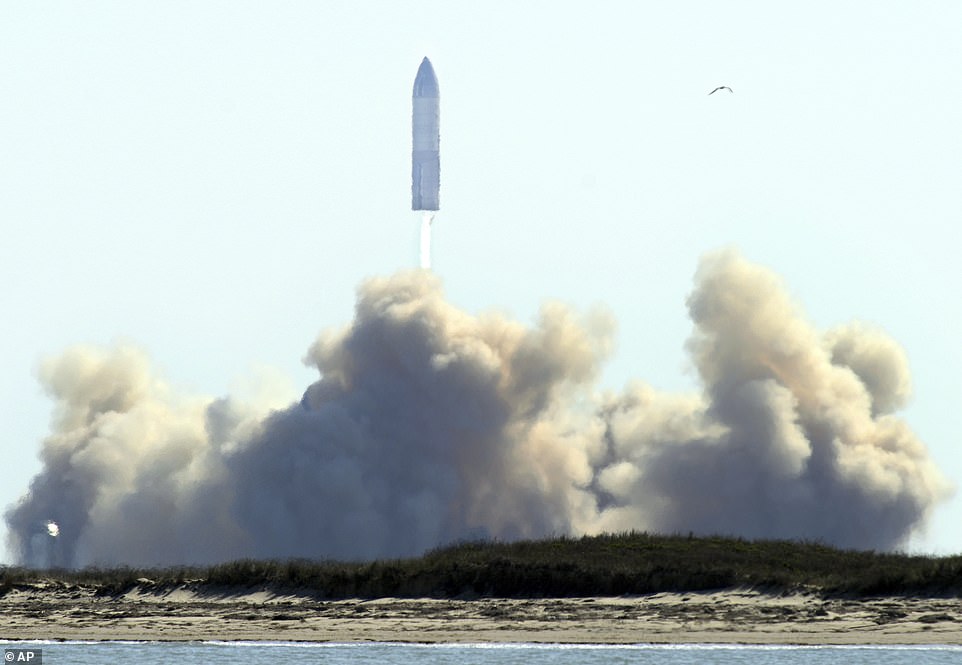 no Starship has been able to stick the landing – both Serial Number 8 (SN8) and Serial Number 9 (SN9) both exploded when attempting to land. Pictured is SN9 taking off in February 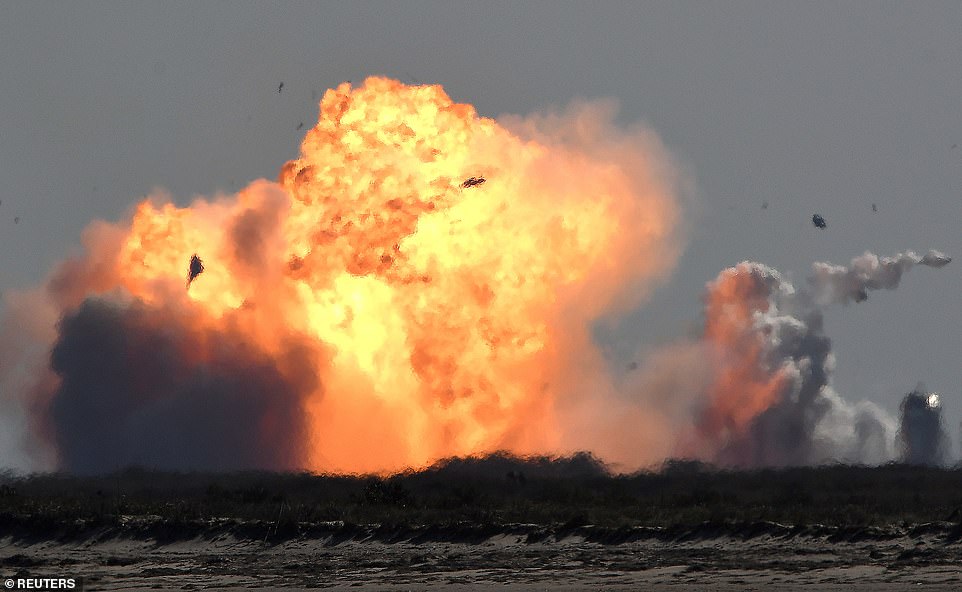 SN9 was unable to maneuver into the vertical position before landing on the launch pad, hindering its ability to stick the landing 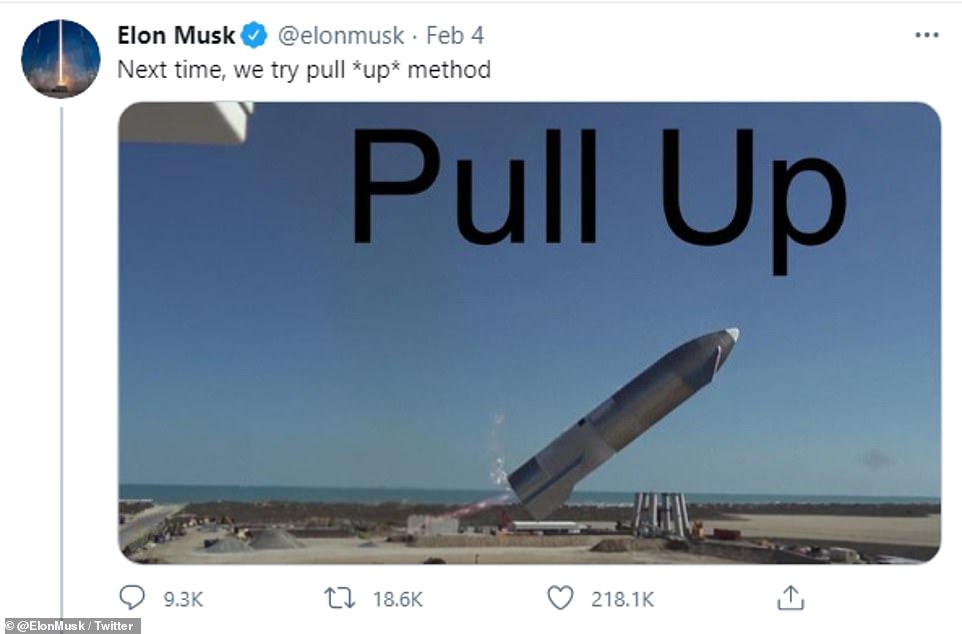 Musk shared an image on Twitter shortly after SN9 exploded. He joked that next time SpaceX will have the rocket pull up – and hopefully SN10 will be able to do it and land without being destroyed 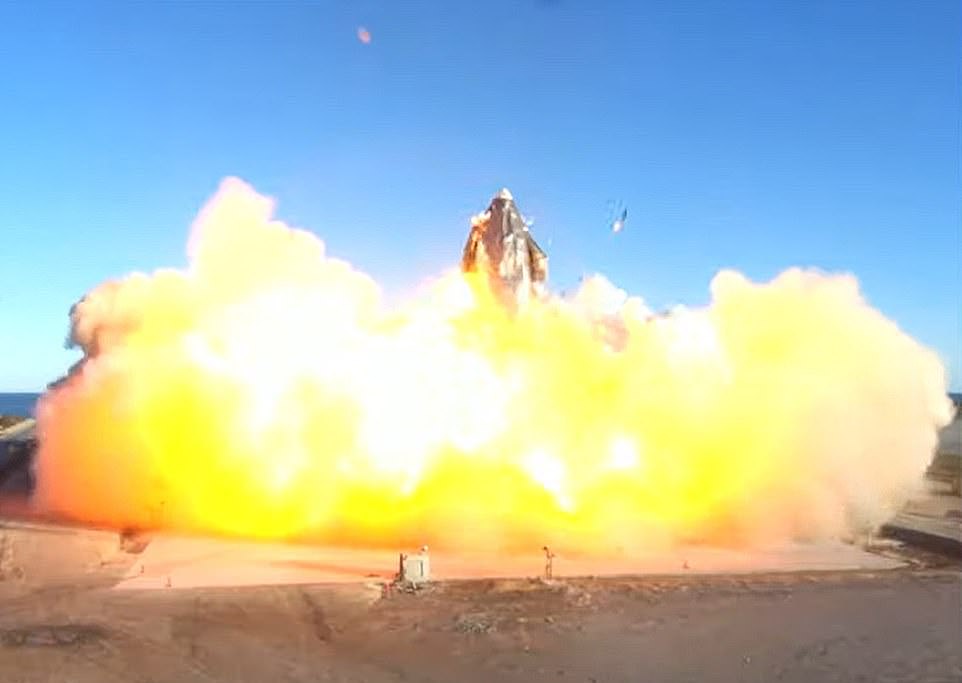 SpaceX’s SN8 (pictured) suffered the same fate in December, but was able to turn in time before reaching the launch pad

SpaceX had previously requested a waiver for the from the division to ‘exceed the maximum public risk allowed by federal safety regulations’ and even though it was denied, SpaceX still went ahead with the flight test for SN8.

The non-compliance led to the FAA delaying SN9 from taking its first high altitude test and after Musk blasted the agency on Twitter and SpaceX completed a series of checks, the Starship was finally able to take off.

SpaceX is not just launching the massive rockets to put on a show, the firm is testing them with the hopes of using the vehicles to send people to Mars.

LIST: Elle King And Miranda Lambert Among The Collaborations For The 56th ACM Awards

My Government Not Elected To Pay Salaries Alone —El-Rufai