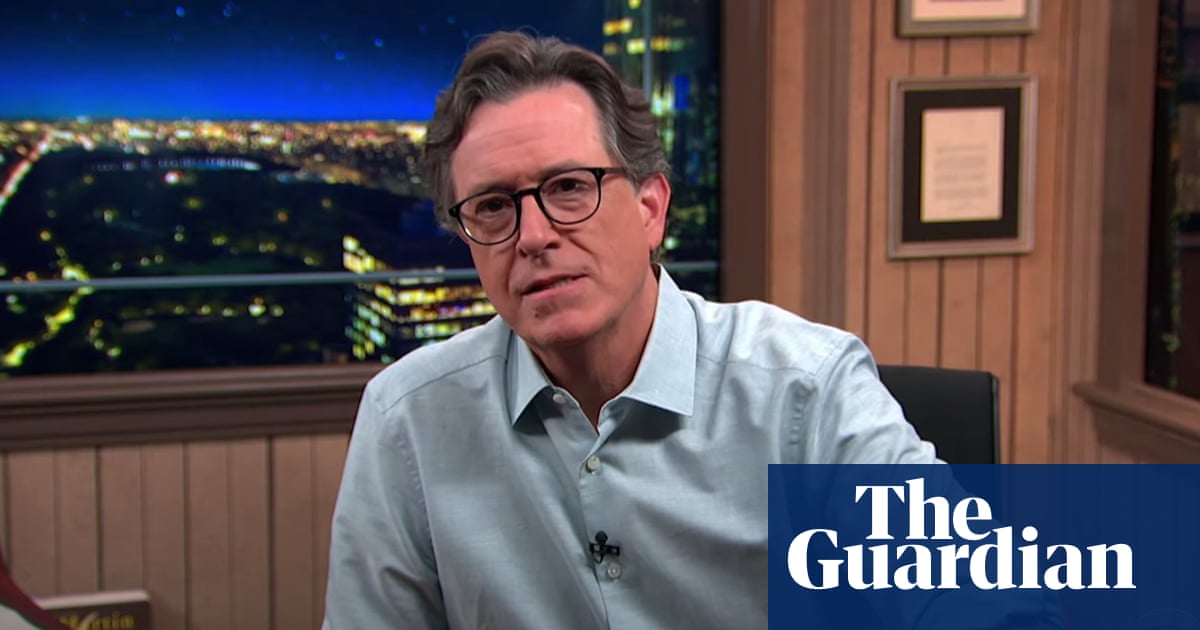 For the first time in five months, Stephen Colbert hosted the Late Show from the Ed Sullivan Theater in New York City on Monday night, though not yet on stage; instead, Late Show staff rigged a theater office into a new, pared-down studio, complete with paraphernalia from Colbert’s actual office upstairs and a calendar stuck on 12 March, the date of the last in-studio show.

“As much as it’s nice to see my crew here in the building, I do want to thank my wife and kids again, for everything they did to help produce the show while I was home,” Colbert said, joking: “I just want to say, over the past five months, y’all became like a family to me.”

Colbert then turned to the news: just before his weeklong vacation, Congress was stuck on how much supplemental income to pay unemployed Americans. Democrats sought to keep the current amount of $600 a week, while Republicans pushed to cut it to $200. “They’re also proposing turning the food stamp program into actual stamps you lick for sustenance,” Colbert joked.

Rather than address the gridlock, Trump signed an executive order on Saturday to supposedly provide $400 of supplemental unemployment, extend the payroll tax holiday and impose a moratorium on evictions. “I can understand why he’s in favor of providing that,” said Colbert, “because come January, everyone in his family might need it.”

But there’s just one problem with the executive orders: “It’s against the law,” said Colbert. Not only are they unconstitutional, but “they also don’t help”. That $400 in weekly supplemental income? Trump’s order requires states to pick up 25% of the tab, which Colbert compared to saying: “Hey everybody, drinks are on me! As long as you pick up 25% of it first – you people are desperate, you’d hate you if you don’t do the thing I just promised you would.”

The payroll tax holiday, meanwhile, only delays the taxes until the end of the year; Trump promised to make them permanent as an incentive for re-election in November. “Uh, buddy, that’s a pretty small carrot,” said Colbert, who broke out his Trump impression: “Give me another four years of unbelievable corruption and unbridled destruction of all norms and if you do, free refills on your soft drink of choice with purchase of $10 or more.”

On the Daily Show, Trevor Noah also discussed Trump’s slapdash series of executive orders, which many have criticized as not only unconstitutional in bypassing Congress, but also untenable. The eviction moratorium, for example, merely advises federal agencies to “consider” whether evictions are necessary. Even Ben Sasse, Republican senator from Nebraska, called Trump’s orders “unconstitutional slop”.

“Damn, unconstitutional slop? I thought that’s what they called the in-flight meals on Spirit Airlines,” joked Noah. “But you’ve got to give it to Trump, man – he knows that Congress is so gridlocked, they can make even him look good.”

“It doesn’t matter if his executive orders are illegal or toothless or completely unworkable,” Noah continued. “He understands that even the appearance of doing something is better than the appearance of going on recess in the middle of a recession.” Which is what Congress is doing for the month of August, although “Congress will tell you that they aren’t on recess. Apparently they’re just ‘at home’, but they’ll come back if there’s a deal, which there won’t be, because they’re not working.”

By and large, between process and proposals, “Trump has just created a mess,” said Noah. Freezing the payroll tax, for example, would either hit people with a larger tax bill later or drain social security, which gets its funding from payroll taxes. Trump’s executive orders, Noah concluded, are thus like “those coupons that you get where it says the good news in big letters: ‘free value meal!’ And then on the bottom it says ‘offer only valid in Alaska between two and four in the morning and if Jerry is working, then you have to share your fries with him.’”

And on Late Night, Seth Meyers lambasted Trump’s “meaningless, unconstitutional” executive orders, which he signed over the weekend “rather than negotiate with Congress, while tens of millions of Americans face evictions and go without much-needed unemployment benefits”.

“Americans can see through this,” Meyers concluded. “He’s desperate and unpopular, which is why he’s signing empty executive orders and sabotaging the post office. He has no accomplishments, no policies,” and, to quote Trump at one of his speeches, “no anything”.

Debate about kneeling during anthem continues at Bluefield College

Fuel stations to switch to greener E10 petrol from September