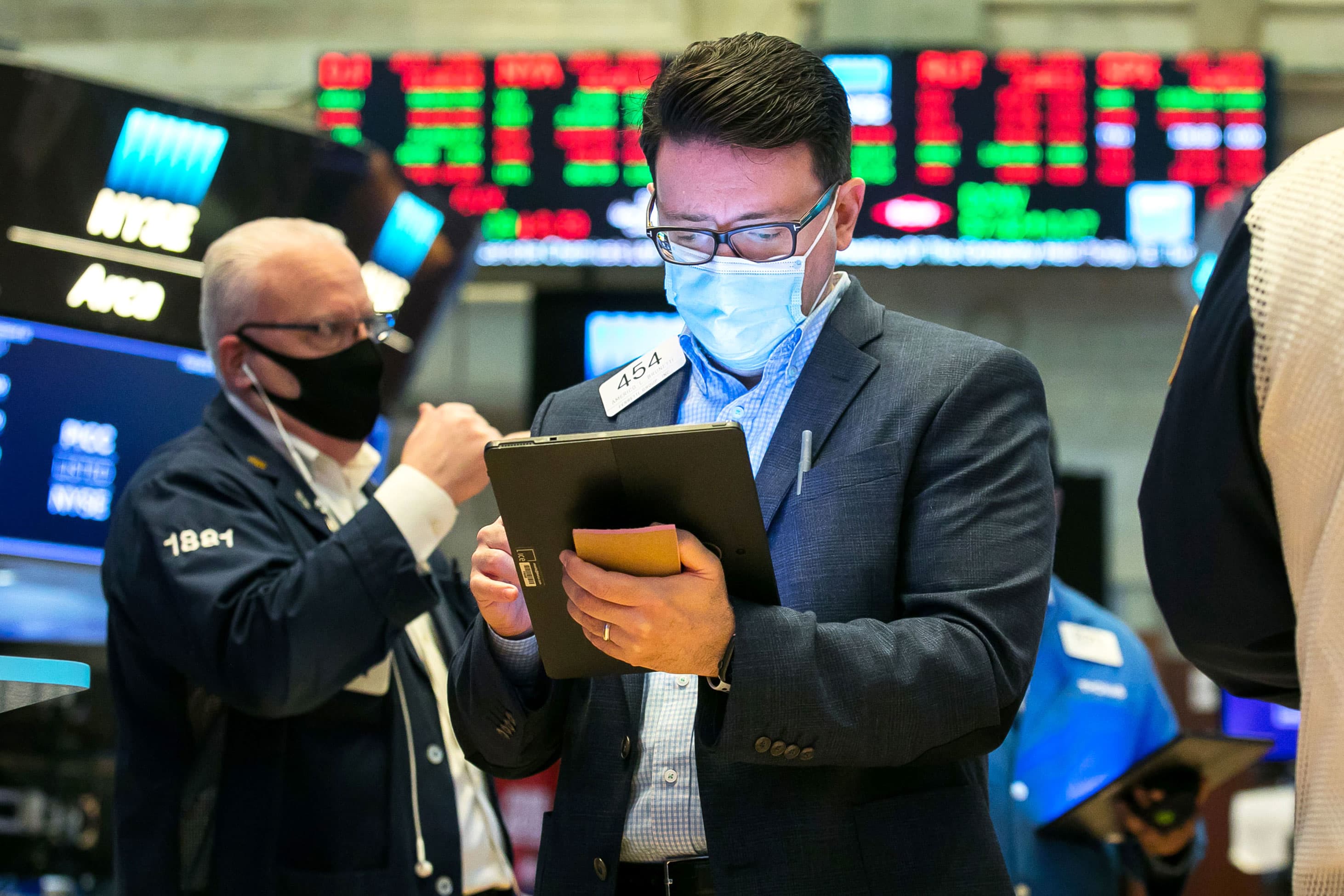 Traders on the floor of the New York Stock Exchange.

Futures contracts tied to the major U.S. stock indexes were mixed during the overnight session Thursday evening after a pop in interest rates earlier in the day helped push the Nasdaq Composite to its worst session since October.

Dow futures nudged 19 points points higher after falling as much as 150 points earlier in the extended session. S&P 500 futures hovered above the flatline. Nasdaq 100 futures, on the other hand, lagged as they traded in negative territory. Contracts tied to all three indexes appeared to rise and fall as the rate on the 10-year Treasury note fell and rose, respectively.

The moves in equity futures came after a negative regular trading session on Thursday.

The Dow Jones Industrial Average dropped 559 points, or 1.8%, slipping from a record high. The S&P 500 lost 2.5% to clinch its worst day since Jan. 27 while the tech-heavy Nasdaq Composite shed 3.5% and suffered its biggest one-day sell-off since Oct. 28.

The momentum that carried stocks to all-time highs earlier this month has met resistance amid a sudden and pronounced rise in bond yields. The rate on the U.S. 10-year Treasury note briefly soared as high as 1.6% on Thursday before simmering back down to around 1.52%, its highest level since February 2020.

The 10-year yield, last seen around 1.5%, is up more than 50 basis points since the year began, a rapid rise for a bond rate used as a benchmark for mortgage rates and auto loans.

Economists and investment managers say the rise in rates is an appropriate reaction by the bond market to positive economics as vaccines are rolled out and GDP forecasts improve, which should benefit corporate profits.

But the sheer pace of the rise has also had the effect of dampening investors’ appetite for richly valued areas of the market. Thursday’s jump in the 10-year yield also put it above the S&P 500′s dividend yield, meaning that equities — which are considered riskier assets — have lost that fixed-payment premium over bonds.

“Until recently, market participants have been able to digest the upward drift in long-term rates, but it appears that the next leg up in interest rates is a bigger bite to chew,” Charlie Ripley, senior investment strategist for Allianz Investment Management, said in an email.

“Looking at where real yields were at, they were simply too low when considering growth expectations, and it’s likely that long-term real yields will continue to drift higher as economic data improves,” he added.

Popular big-tech stocks like Alphabet, Facebook and Tesla, all of which began the year on strong footing, dropped 3.2%, 3.6% and 8% on Thursday. Apple, one of the largest, cash-heavy companies in the world, has seen its stock slide more than 15% over the last month.

Instead of tech, where companies tend to borrow more on average, investors are shifting money into so-called reopening trades, buying stock of companies that would benefit most from the vaccine rollout and a return to regular travel and dining trends.

Energy has gained 6.8% this week alone, the biggest winner by far amid expectations that consumers around the world will soon be driving and flying as they were prior to the Covid-19 pandemic. Industrials and financials are the only two other sectors in the green week to date.

Democrats suffered a setback Thursday evening in their plans to pass President Joe Biden’s $1.9 trillion stimulus package. Senate parliamentarian Elizabeth MacDonough determined lawmakers could not include a $15 minimum wage hike, a major component of the plan, in a bill passed via budget reconciliation.

Reconciliation allows a party to pass their legislation with a simple majority vote but restricts the types of provisions that can be included based on how much they would impact the federal deficit.

Democrats are expected to pursue a minimum wage hike in future legislation and are still likely to try to pass some version of the original $1.9 trillion plan.

Subscribe to CNBC PRO for exclusive insights and analysis, and live business day programming from around the world.

Britain locks down: Pubs kick out drinkers for the final time before national shutdown

Preparing for Showtime: The Job Interview

Oxford and Exeter are top of ‘rape culture’ university list