Students who attended Hillsong College in Sydney have complained they were asked about their sex lives and sexual preferences before and after they enrolled.

They shared dozens of stories on the Instagram account Do Better Church that accused the college of quizzing them about their mental health, drinking, smoking cigarettes, whether they were sexually active and whether they were gay.

Many claimed that once they signed up as students they were shamed, pressured and bullied, and suffered because of a lack of support if they did tell the truth.

Hillsong College is part of Hillsong Church and has campuses in Sydney and Phoenix in the United States.

One poster wrote that it was suggested to prospective students by people who had ‘learned the hard way’ to not admit to having suffered trauma or abuse in their own childhoods if asked. 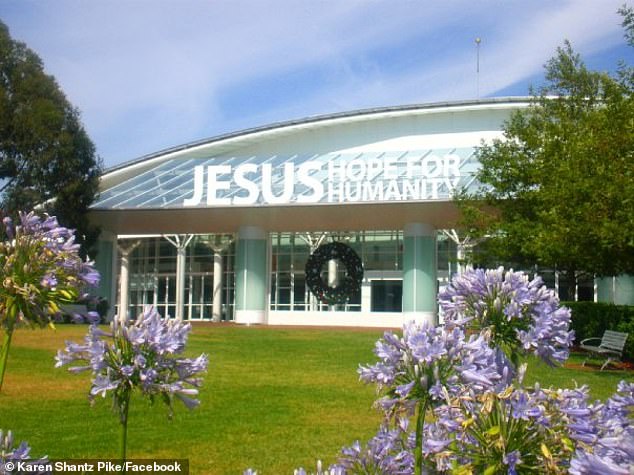 Hillsong College has been the target of dozens of claims of intrusive questioning about sex and sexuality during – and after – student enrolment. Hillsong responded that its actions were designed to protect children 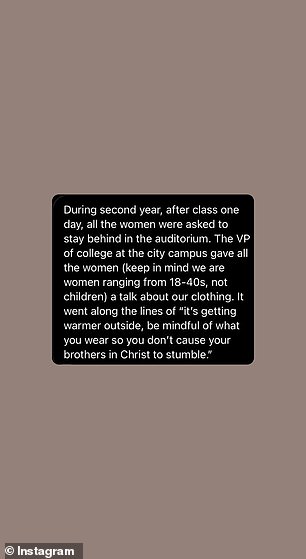 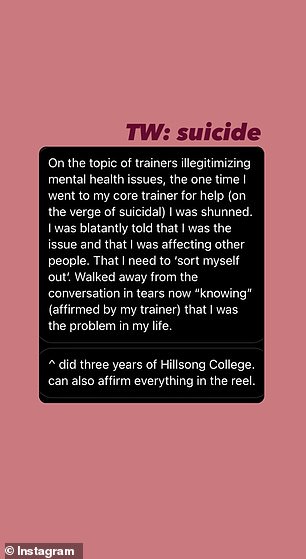 ‘Turns out (at least in my time at the college) that anyone who discloses any kind of childhood abuse or trauma is also blacklisted from any children’s or youth ministry as they are most likely to become offenders.’

In some cases it was claimed the college refused to let anyone who had admitted to drinking or watching pornography work with children and had sacked staff who had had consensual sex.

‘You’re not even allowed to work with children if you admit to having been drunk in the last six months,’ one post said.

But the most common complaint commenters had about Hillsong College was its treatment of people over sexual behaviour and sexual preference – including where the sex was consensual.

‘Sooo many students live in pure panic and fear because they’re gay and living the lifestyle aka going on dates [and even] hetero couples having consensual sex,’ one wrote.

They continued: ‘If they’re found out they will lose their spot in college and their visa. [The college has] really way too much power and control.’ 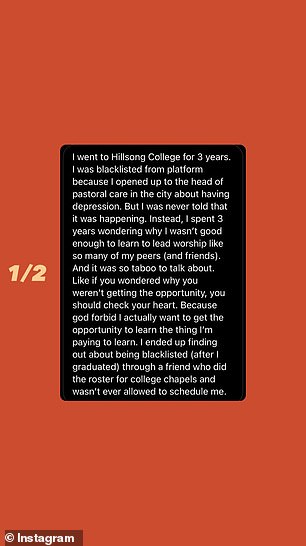 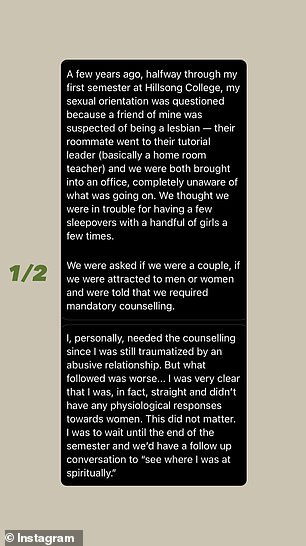 Some of the most common complaints posted surrounded inappropriate questioning and treatment over sexuality, but even people’s mental health was allegedly targeted 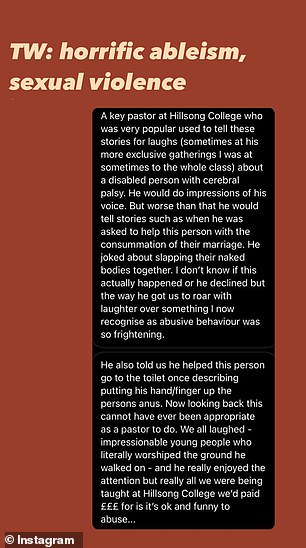 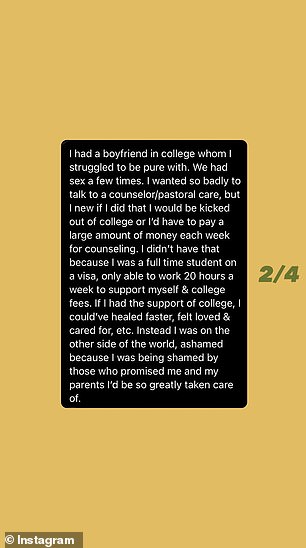 Another wrote: ‘I met my two best friends who were a couple (been together for years). They had sex and were honest about it. Suddenly they were banned from seeing each other, no contact at all.

‘They had to clean toilets. Hillsong made them pay $150 each a week to have couples pastoral counselling. It was the worst year of their life.’

In one post a student admitted after a class, the women were asked to stay back and warned that because the weather was getting warmer, they should avoid wearing lighter clothing as it might ‘force our brothers in Christ to stumble’.

‘We ask, “Has your conduct in any way breached the above in the last 12 months?”‘

The college also refuted many of the claims made in the Instagram posts.

‘The interview questions along with the other working with children and young people screening steps undertaken are aligned with royal commission recommendations, child safety standards adopted by each state and territory and our own code of conduct for those in ministry leadership roles,’ a Hillsong College spokesperson said.

‘Since Hillsong College commenced, almost 20,000 people have successfully graduated and now serve successfully in ministry positions across the world.’

‘The vast majority of past students report wonderful experiences, however like any college, there are some students whose experience did not meet their expectations, for a variety of reasons.’

‘We should also note that students can opt-out of the interview. Our heart is definitely not to produce shame or fear and we encourage any last student with concerns to contact us.’

Do Better Church received so many anecdotes about Hillsong College that the account, which has nearly 20,000 followers, ran an hour-long live chat session to deal with all the incoming complaints of people’s experiences studying and working there.

A Hillsong College spokesperson provided Daily Mail Australia with a list of questions it says it asks prospective students. They are: