A woman has been accused of trashing a struggling restaurateur’s house, leaving thousands of dollars in damage and unpaid rent.

Chris Taranto, who runs Geelong’s The Continental on Little Mallop Street, has brought in cleaners accustomed to scrubbing blood off kill house floors to clean his Saint Leonards property, south of Melbourne on Port Phillip Bay.

The clean-up bill, quoted by two cleaners, is just under $30,000, such is the damage to the property. 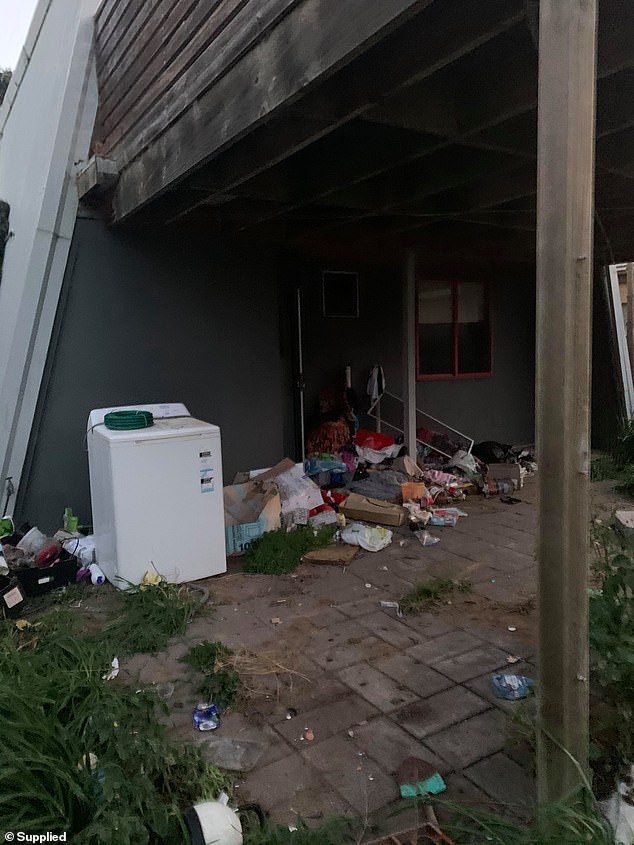 Rubbish left at the property of Chris Taranto by Rebecca Kelly 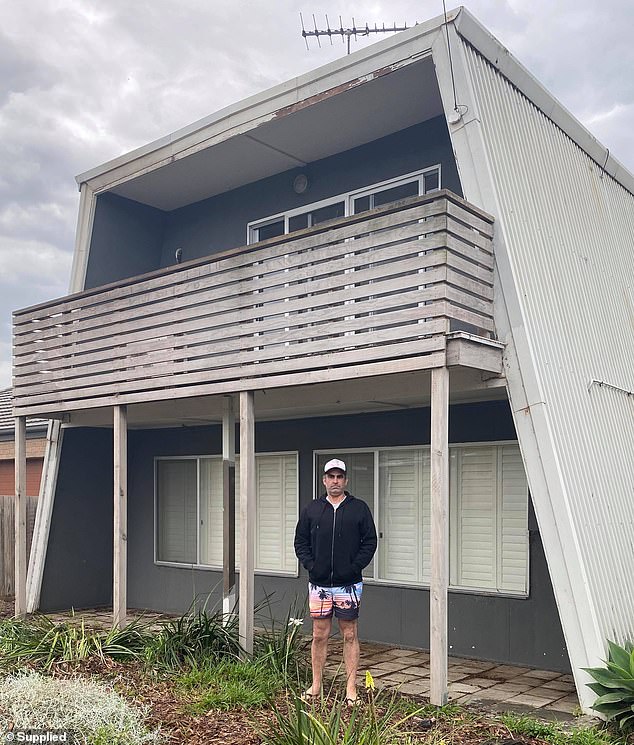 Chris Taranto was quoted a little under $30,000 by two cleaners to clean his Saint Leonards home 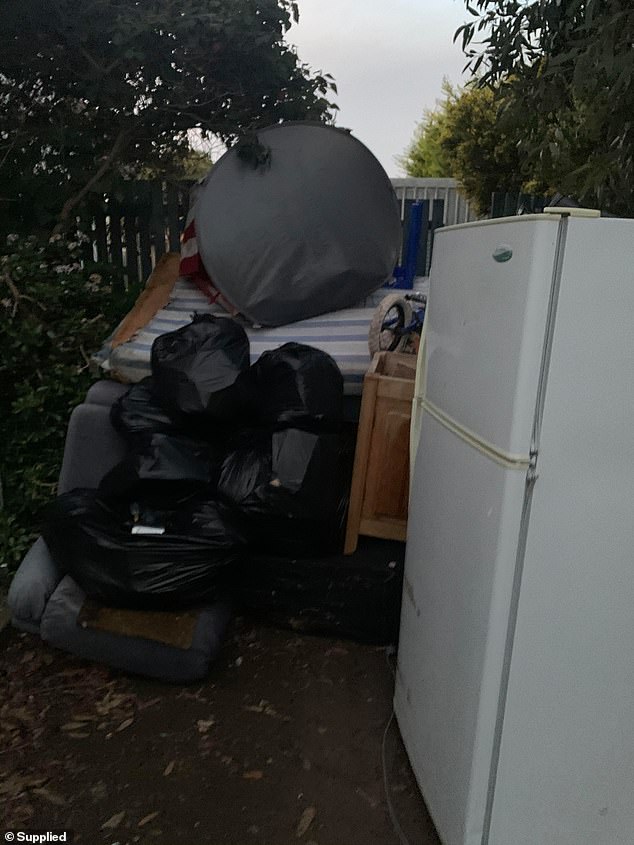 Furniture dumped in the backyard on Chris Taranto’s property

Mr Taranto was forced to have his tenant Rebecca Kelly evicted from the property despite the Victorian Government placing a moratorium on evictions during the state’s COVID-19 crisis.

The matter went before the Victorian Civil and Administrative Tribunal in September where the presiding member found in the popular restaurateur’s favour, booting Ms Kelly from the house.

She had been living in Mr Taranto’s property on-and-off since November on with her two adult sons.

Mr Taranto told Daily Mail Australia he took Ms Kelly in because of her work with disadvantaged locals, but it turned into a nightmare.

‘I thought she was a nice person and I wanted to give something back to the community, so I thought I’d help her out,’ he said. ‘She turned into the tenant from hell.’

Mr Taranto claimed his tenant had blamed a ‘bad eBay experience’ and ongoing domestic issues at home for failing to pay her rent.

Struggling to keep his business afloat during Victoria’s COVID-19 lockdown, Mr Taranto had wanted his tenant out so he could sell the property.

‘I’ve got no money. My restaurant had been closed for months, so I had to sell the house. I forfeited on my loan because I couldn’t afford the repayments, so I’ve been living off JobKeeper. Life is pretty tough at the moment and this person is living in my house for free and wrecking it,’ Mr Taranto said.

‘She’s running a free food shop for the needy and I’m at the point where I almost need to go there.’ 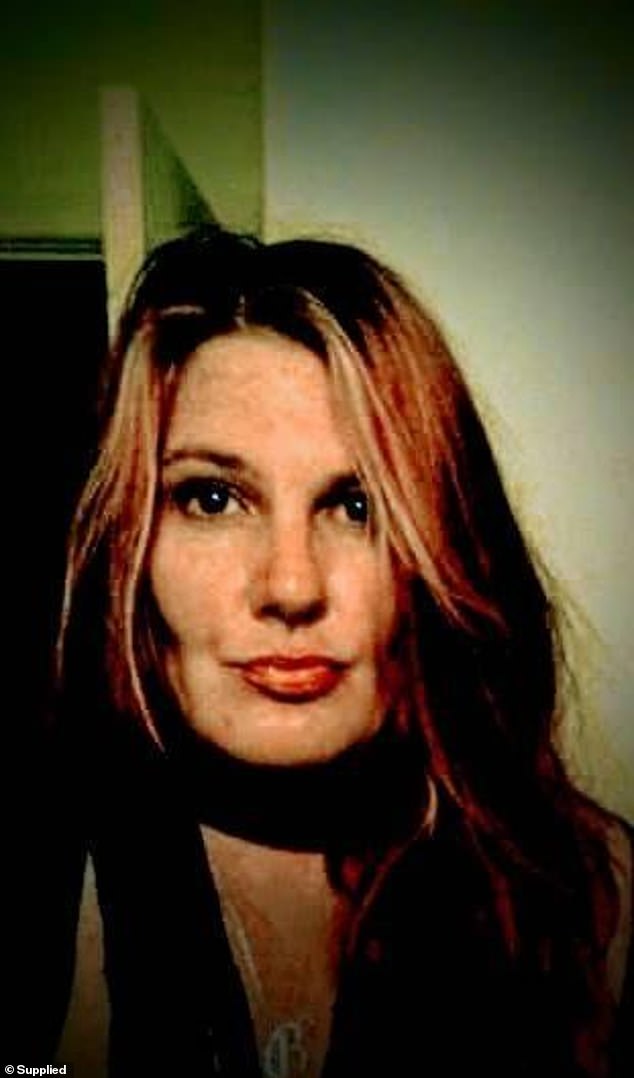 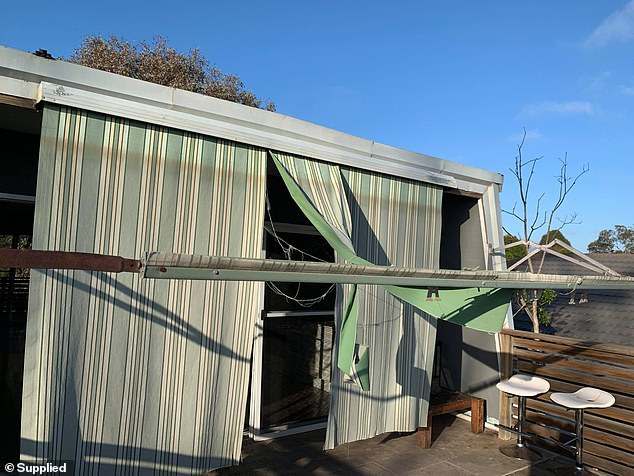 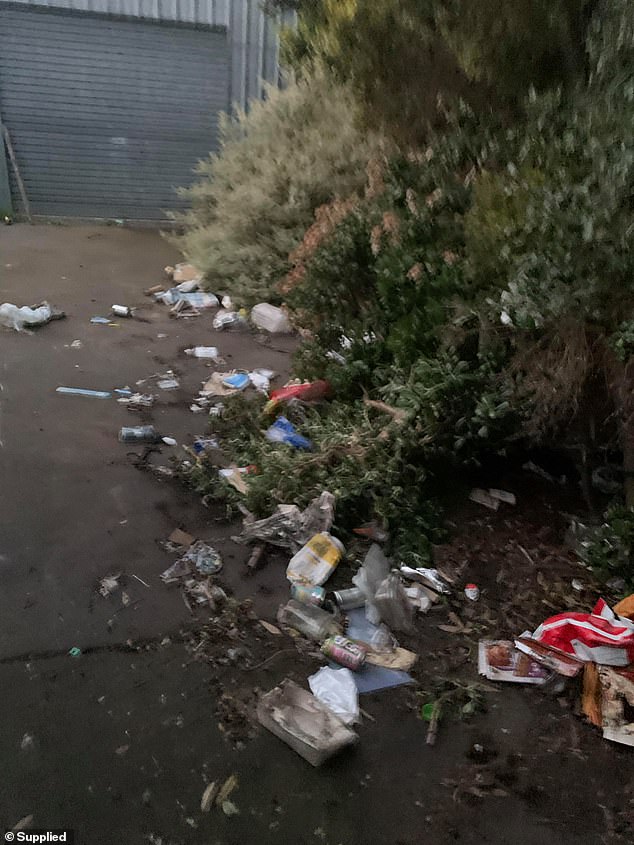 Rubbish is strewn across the backyard of Chris Taranto’s property

Mr Taranto claimed his air conditioner unit had been ripped off the wall, an awning torn off the house and garbage strewn ‘everywhere’.

‘There is literally piss and sh*t everywhere,’ he said. ‘She just threw the cat s*it off the balcony. There was a giant pile of it just outside the house. I pulled 100 cat food cans out of the garden and the peel back lids.’

Mr Taranto said he could not step foot in the house for 10 minutes at a time without wanting to vomit.

‘The kids have written all over the walls. Everywhere you look – the carpet is torn, light fittings are out of the garden when they were hardwired in.’

While Mrs Kelly admitted she had failed to pay her rent, she denied trashing Mr Taranto’s house.

‘Yes I do owe the rent, I fully admit that – Chris will get his money but I’ll have to organise a payment plan, but I did not trash the house.’ she told Daily Mail Australia.

Ms Kelly said she paid $500 to have the home cleaned by an industrial cleaner, but Mr Taranto was not satisfied and refused a subsequent offer for them to try again.

‘He refused. So what can you do,’ she said.  ‘I said whatever the costs are, that’s fine and … he refused.’

Ms Kelly further claimed the property had issues before she moved in and forked out $500 to fix a faulty fuse box when she couldn’t get a hold of Mr Taranto.

‘The electrician said the meter box is dodgy and it’s going to blow and you have to contact your landlord about that because it is very, very unsafe,’ she said.

‘So we were living in an unsafe house.’ 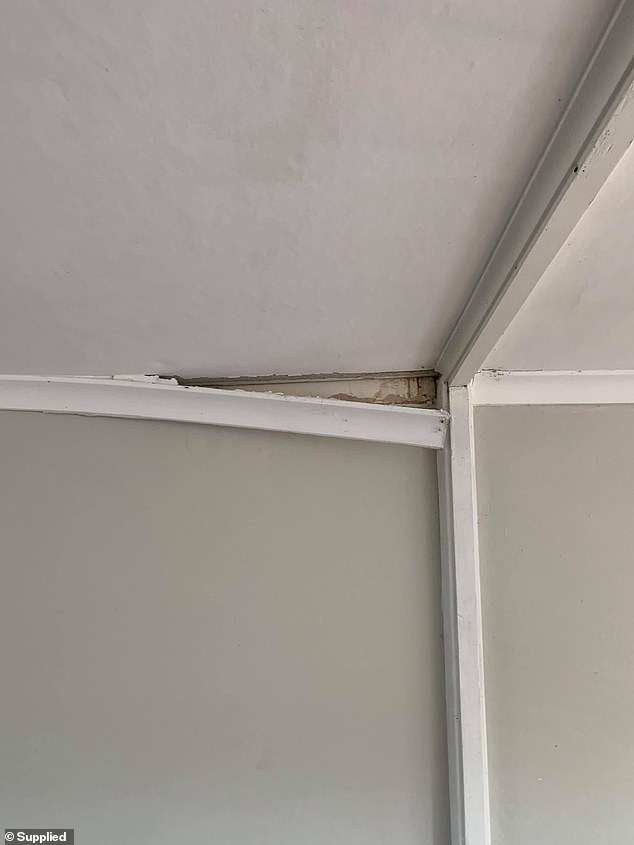 More damage from within the home of Chris Taranto 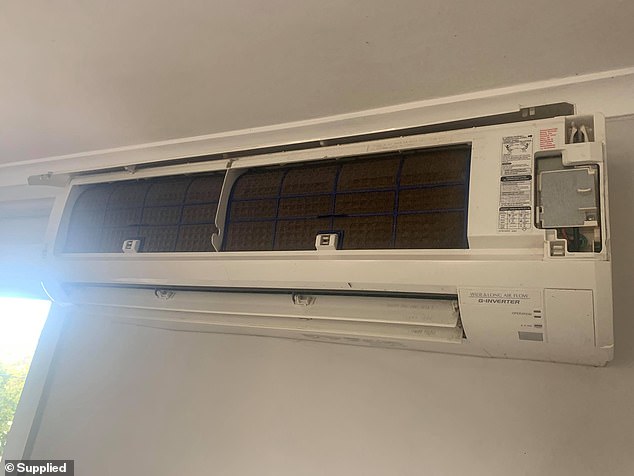 A broken air conditioner was found inside Chris Taranto’s home 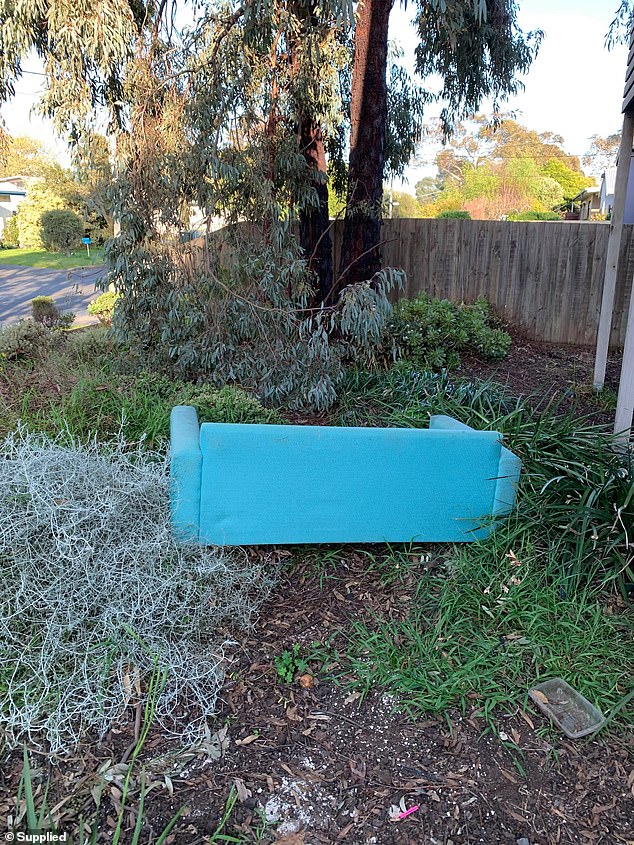 Ms Kelly further claimed ‘raw sewerage’ had been flowing from a kitchen sink, which she managed to divert herself through a pipe to the rear garden.

‘There’s always two sides to every story and I said to Chris “I’m sorry about the rent”, but I did try to rectify the damage and obviously was happy to pay whatever he needed in regards to the cleaning,’ she said.

Ms Kelly explained that much of the garbage pictured had been put outside for hard waste collection, which was collected days after she left.

‘It was dirty when we moved in and I cleaned it from top to bottom when we were there,’ she said.

Ms Kelly said her son had caused some mess in the last two weeks of her tenancy when she had already moved to a new home.

‘I wasn’t happy about that because he wasn’t keeping on top of the house where he needed to be,’ she said.

Mr Taranto said he had little time for his former tenant’s excuses for the mess.

‘It’s everyone else’s fault except hers,’ Mr Taranto said. ‘She’s nothing to blame. We’re getting double benefits (on unemployment) and they’re not paying me any money. They were probably taking home more money a week than me.’ 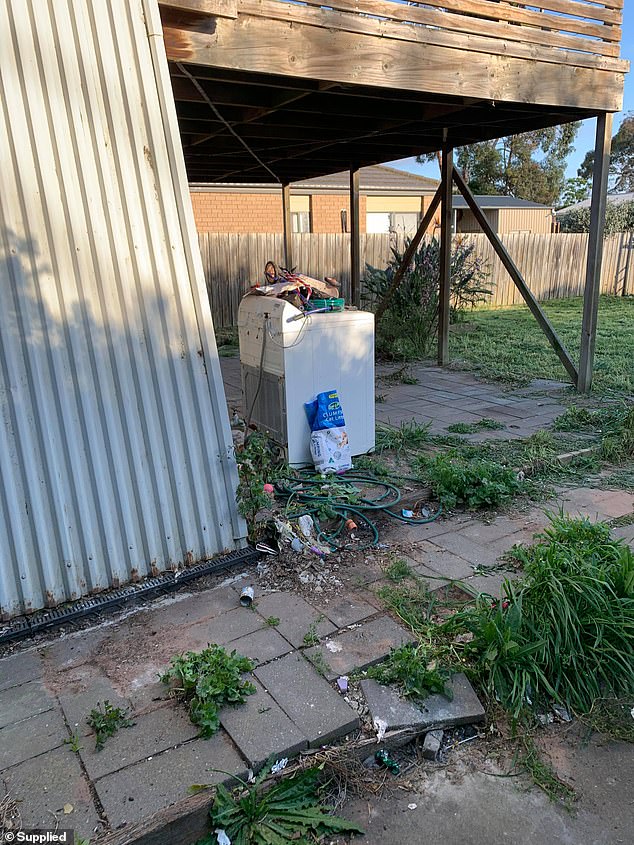 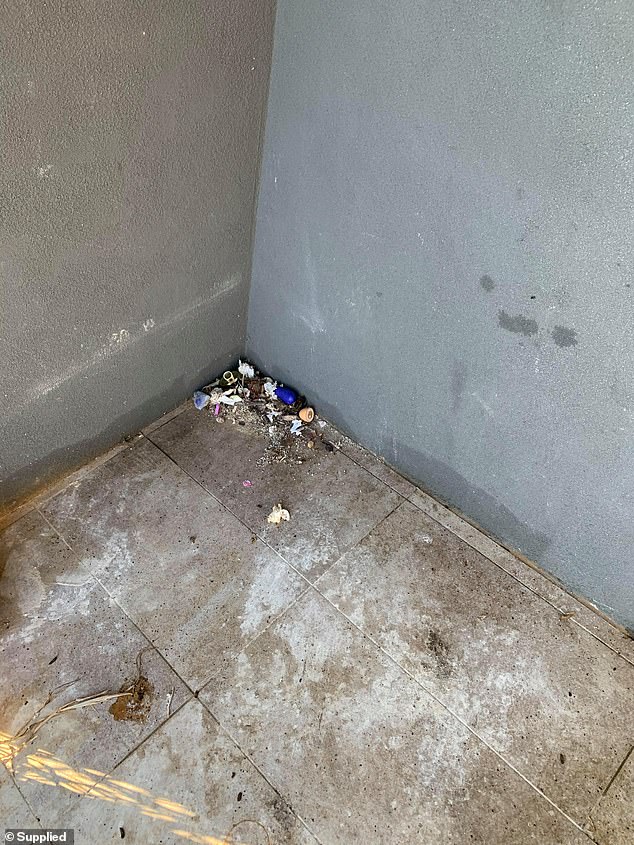 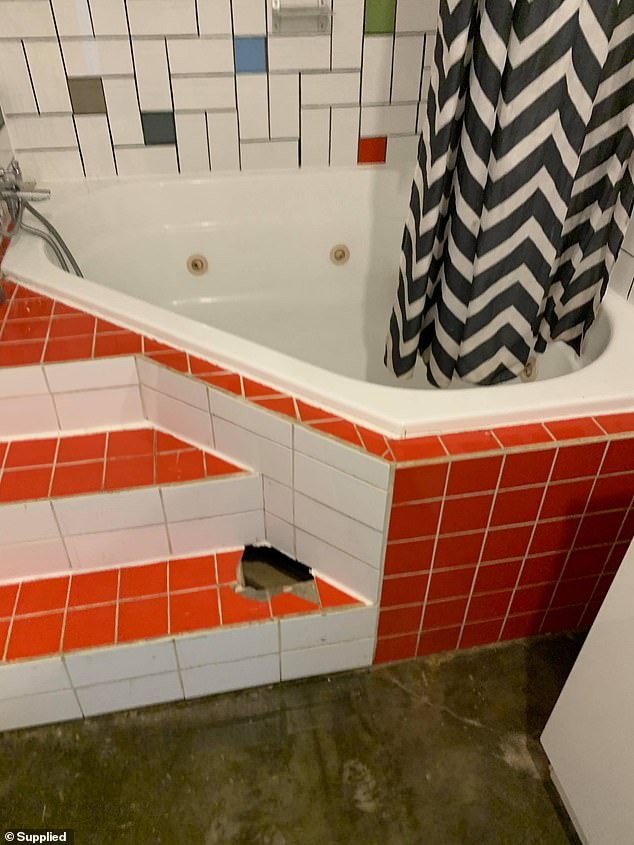 Damage to Chris Taranto’s spa bath he claims was caused by Rebecca Kelly. Ms Kelly has denied accusations she trashed his house

Mr Taranto said despite Ms Kelly’s continued pledges to pay him back, he was yet to receive a brass razoo.

‘I’ve not received a cent. She’s just stopped paying so now I have to go through the whole VCAT process again.’

Ms Kelly said she would welcome taking the challenge to VCAT.

‘He’s not lost his business. There are pictures of Chris at his business when we re-opened in regional areas.’

Woman, 22, becomes model for Kurt Geiger and Primark after losing her right leg

Why we need sharks: the true nature of the ocean’s ‘monstrous villains’