The granny who inspired Gucci 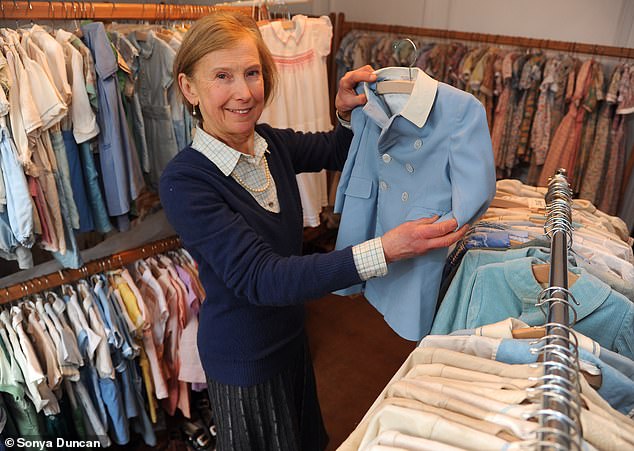 I now have a million dresses,’ says Angela. Opposite: last year’s catalogue for Gucci childrenswear, which was inspired by Angela’s collection

Passionate about puffed sleeves and Peter Pan collars, when Angela Lynne began collecting vintage children’s clothes 50 years ago, she never dreamed her hobby would be a game-changer for one of the world’s top fashion houses

The royal children have sparked a trend for more traditional childrenswear, much to the delight of Angela Lynne, an avid collector of vintage children’s clothing. But it was a huge shock when Gucci came knocking at her door. ‘We live in a big, old, rambling house in Norfolk, and my husband and I are also rambling and rather elderly,’ jokes Angela.

She is speaking to me via Zoom; the wifi is patchy, but behind her I can see an ornate ceiling, a beautiful fireplace and lots of domestic clutter. ‘We live pretty traditionally,’ she explains. ‘My husband boils a kettle and staggers upstairs to shave, because if we put the cistern on, it takes an hour and a half to get a basin of water.’

While there’s definitely a charm to the old-fashioned world I’m peeking into, it doesn’t bring to mind the high-fashion scene I’ve witnessed in Milan: I see no designer candles or plush white carpets, and Angela doesn’t seem the type to don jumbo sunglasses and jet off to a detox retreat. So how did she end up collaborating on a capsule collection with Gucci? She was as surprised as anyone. ‘I hardly knew what Gucci was,’ she admits. However, she had something the fashion house was deeply interested in – an enormous archive of vintage children’s clothing, which she’s been collecting since 1970.

‘I started becoming interested in children’s clothes when I was a child myself,’ Angela says. ‘I loved babies, prams and nursery life, and from around the age of eight, I started drawing them.’ She shows me delicate illustrations of boys and girls that look straight out of an Enid Blyton book.

‘When I was about to have my first child, two maiden aunts took me to Harrods and said, “Choose a dress, darling.” So I found a dress that I thought was lovely. On the train home I kept peeping into the bag to look at it. That was the first dress, and I’ve now got a million.’ Fifty years later, she also has six children and 14 grandchildren.

Angela’s collection focuses mainly on the 1920s to 1960s, and has been amassed through auctions, word of mouth and advertising, mainly from upper-class families keen to downsize. She shows me a little girl’s white silk smocked dress with a Peter Pan collar and puff sleeves from around 1937. ‘This belonged to an aristocratic family who I bought about a dozen dresses from,’ she says.

‘My collection is made up of little bits of country-house life. I say to the families, “What are you doing with all your old clothes?” And they hesitate, then ask their children if they want them, and they usually don’t – so I say, “Well, I’ll give you something for charity for them.”’ She’s also collected prams, toys and books, which she sometimes exhibits at her home.

It was when she and her husband George wrote a book about the collection, Nursery Days, that her archive came to the attention of Gucci kids’ design director Sandrine Delloye. ‘Sandrine got inspired by the children’s clothes,’ Angela says.

Angela invited her to visit the house, and it was agreed that they would collaborate on a capsule collection. ‘Then three seamstresses came over from Florence and we had a long day sorting it out. We decided which things they might get inspiration from, and they drew and photographed them. They then kept ringing me up to check they had sourced the right material. It was quite exciting.’ The result was a beautiful, vintage-inspired collection, which arrived in Harrods last summer. Alongside Gucci’s branding, an ‘Angela Lynne’ label was stitched into each piece to acknowledge its origins. The clothes aren’t copies, but adaptations fit for modern life – a sailor-style cotton dress from the early 1970s, for example, has been reimagined in twinkling blue sequins. A boy’s short-sleeved shirt with a pointed collar nods to a 1950s style in Angela’s archive, and the scalloped edge of a 1960s girl’s coat appears on an embroidered version. Smocking is one of Angela’s favourite details, and Gucci has updated that too, using it to incorporate the brand’s logo on a pretty coral dress.

‘My big moment of joy was when they had a photo shoot here, and I saw rows of these beautiful clothes,’ says Angela. Three of her grandchildren were among the models for the collection, which was photographed in her garden for a special Gucci catalogue (pictured opposite). ‘Gucci is clever because they’ve made the clothes bolder, more appealing to the modern eye, but still very classic. I was staggered to see them all.’

The collection is a far cry from the slogan sweatshirts, unicorn prints and technicolour trainers we’re used to seeing. In fact, Angela doesn’t even like the k-word: ‘I ticked Sandrine off for calling them kids’ clothes, because really they’re very much children’s clothes,’ she says with a twinkle in her eye.

If there’s one family that’s started a trend for dressing children in a traditional way, she agrees that it’s the royals: ‘I was delighted when the Duchess of Cambridge put her boys in blouses, and Charlotte in dresses with smocking.’

It’s a phenomenon that has been watched closely by Susan E Kelley, the Michigan-based founder of fashion blog What Kate’s Kids Wore, which documents the clothes worn by Prince George, Princess Charlotte and Prince Louis. The princes have often been seen in old-fashioned shorts and knee socks, including outfits similar or identical to those worn by Prince William in the 1980s. The princess usually appears in dresses with sandals and ankle socks. 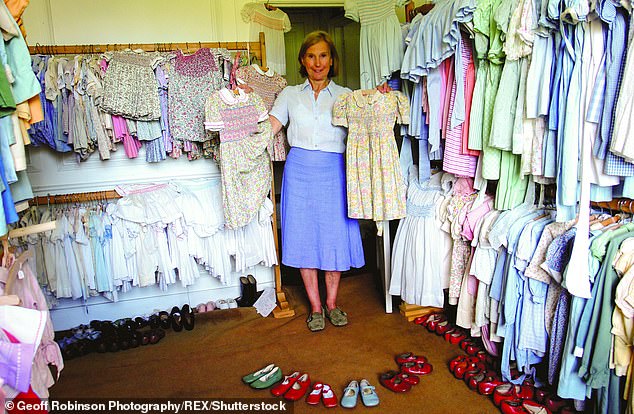 Angela with her ever-expanding collection: ‘None of these dresses is the same,’ she says

Susan’s readers, she says, were initially dismayed by what the children wore. ‘There would be comments like: “Poor George – is he ever going to be able to wear trousers that are full length?” But if you look at photos of George from Trooping the Colour, they put him in the exact outfit his father wore – and that speaks to me of the longevity, appropriateness and utility of the designs.’

It wasn’t just the boys’ clothing that caused a stir, she adds. ‘They would ask: “Why is Charlotte in dresses?” and in the comments people would push back and say, “Hey, my daughter wears dresses – they’re comfortable and easy to run around in,”’ says Susan. ‘And Charlotte looks utterly at ease. I think of the 2019 King’s Cup Regatta [at which Charlotte wore a striped Ralph Lauren dress] – that was one of the times she stuck her tongue out at everybody. She was having a blast.’

Ultimately, fans of the look outnumber critics: new clothes seen on the young royals tend to sell out immediately, and even the blanket George was swaddled in as a newborn was ordered 10,000 times within hours of his appearance outside St Mary’s Hospital. ‘I think they’re perceived as a very well put-together family unit, and they exude qualities that people would like to emulate,’ says Susan. ‘I also think there’s been a turn towards more traditional children’s clothing. Particularly in times of uncertainty, the notion of a more traditional look can be comforting.’

For Eva Karayiannis, who designs children’s clothes for her own label Caramel, it’s the idea of sustainability and consistency that makes classic clothing so appealing. ‘I don’t think the Duchess is trying to make a statement that “My son is very formal”, but instead, “I’m handing down such a beautiful collection of clothes,”’ she says.

‘I like the fact that in the past, people didn’t have a wardrobe full of clothes – there was a process of thinking behind it, and appreciation. I think we’re coming back to caring about what we buy.’

Angela’s collection has very much come from upper-class English families like the Cambridges. She’s keen to make the point, however, that it wasn’t only aristocrats who dressed their children well in the mid-20th century. ‘You’ve only got to look at a photo of evacuees in the war going off with their gas masks – they’ve all got lovely tailored coats, proper walking shoes and knee socks.’

Before we had the technology to mass-produce clothing, things had to be made to last. ‘The workmanship was wonderful and clothes had proper hems. There was a lot of handing down and mending, and in families with several children, you’d let the hem down for a year or two, then it would go up again for the next child. I’ve got lovely woollen clothes with the most beautiful darns in them – they’re works of art in themselves.’ She shows me a small pair of red sandals, dating from the 1940s or 1950s, that have had their leather soles neatly patched by a cobbler.

Angela has been told that the Gucci collaboration is selling well. And her own collection continues to expand, though more slowly. ‘I am getting very discerning now; every piece I have has to be different,’ she says. What started with a few boxes of clothes, then took over a cupboard, now has a whole floor of the house. ‘If there are 70 dresses on a rail, and about eight rails in the room, none of those dresses will be like the next one. That’s extraordinary to me, and that’s the fascination.’

Josh Hawley Is ‘Not Going Anywhere.’ How Did He Get Here?