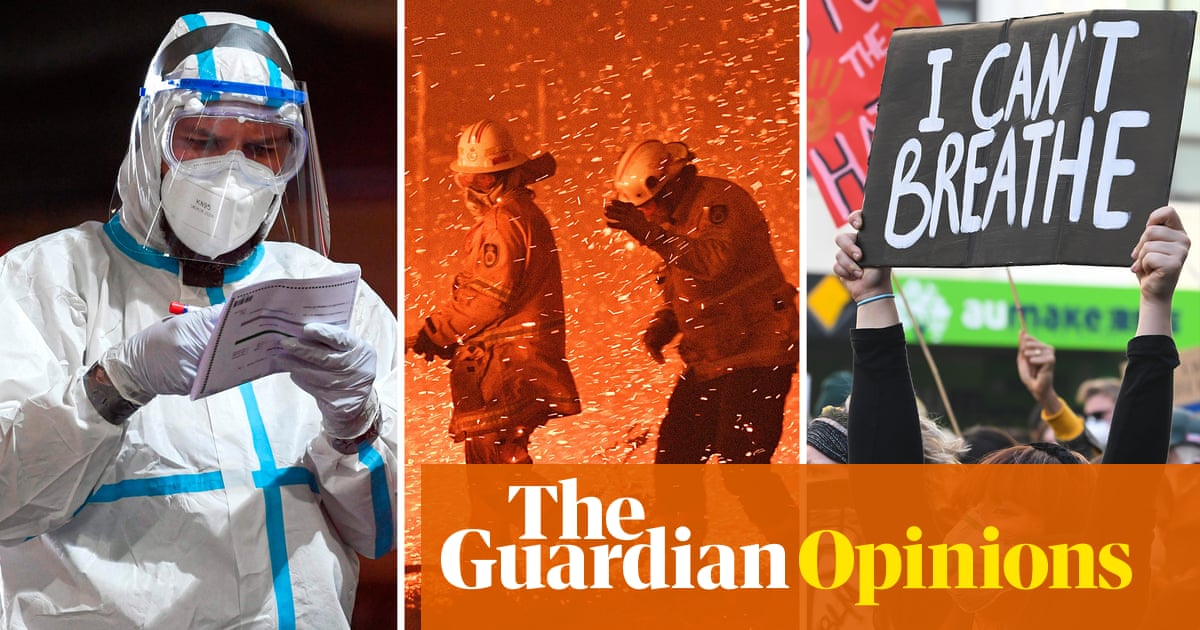 Remember New Year’s Eve 2019? As the clock struck midnight and you toasted 2020 with warm champagne, maybe you were excited about the year ahead: an overseas holiday, a new job, a university course, a wedding, elective surgery, getting your driver’s license. Whatever you planned probably hasn’t happened.

Years are usually eulogised at their conclusion, but six months into 2020, this very special year is already being hailed as “the worst year ever.”

There are several strong contenders for this title of worst year ever. They include 1918, the final year of the first world war, the influenza pandemic that wiped out millions around the world, and 536 – a very bad year indeed – where a dense fog (most likely caused by a massive volcanic eruption) plunged half the world into total darkness, 24/7 for 18 months. That year, snow fell in summer, crops failed, people starved and a few years later a massive plague erupted that would lead to the collapse of the Roman Empire.

But certainly this year is, for many people, the worst year of their lifetimes. This is in part because Covid-19 is not just an abstract news event happening in some distant part of the world. It is everywhere and has personally affected almost everyone.

In addition to the pandemic, 2020 has seen the news cycle spin into overdrive. Only six months in, it is already several years in one.

The year started with large parts of Australia destroyed by megafires. On New Year’s Eve, residents and holiday makers in Mallacoota sheltered from an enormous fire front at the beach. The scene was repeated in communities around Australia as vast fires were left to burn because they were too big to fight.

The megafires eventually destroyed a billion animals and drove many species to the brink of extinction.

At least 34 people were killed and almost 3,000 homes were lost. All summer, Australians in Melbourne and Sydney watched in distress as ash rained down from the sky.

The air was so wretched in some places that you had to wear a mask outside. All up 445 people died from the secondary effects of smoke from Australia’s bushfires, and thousands were hospitalised.

Still in crisis mode, Australia was then hit by severe floods. In mid-February, within just a few days, parts of Queensland and New South Wales were soaked by more rain than many areas saw in all of 2019.

Of course the locust plague was of biblical scope. That is Big 2020 Energy, right there

The rebuilding and collective healing that would usually occur after such major natural disasters got shoved to one side come March, as Australia scrambled to close all borders and shut down the economy to protect its citizens from the pandemic. It was only in May that the fires were declared extinguished.

Globally, the year started with a wobbly feeling that perhaps world war three would break out due to tensions escalating between the US and Iran. On 3 January, a US airstrike killed a top Iranian general. Iran retaliated on 7 January with a ballistic missile strike targeting American troops in Iraq.

On 5 February, Trump was acquitted on two charges of impeachment.

On 25 May, George Floyd was killed by police officers in Minneapolis sparking mass protests around the world and a long overdue reckoning on race.

Brexit passed somewhere in all of this, but what was meant to be a momentous triumph for UK prime minister Boris Johnson got lost in the government’s scrambled and confused response to Covid-19 that included Johnson himself being admitted to the ICU with the virus, on death’s door.

We’ve had to deal with all this while mourning Kobe Bryant – killed in a helicopter crash in January (350 Covid years ago) – speculating what actually happened with Harry and Meghan (as they announced they would quit the royal family in January) and trying to self-soothe while reading about a locust plague (!!!!!!) “of biblical scope”.

Of course the locust plague (one swarm in northern Kenya was reported to be (60km long by 40km wide) was of biblical scope. That is Big 2020 Energy, right there.

For me, if there is one image that represents the weirdness and intensity of 2020, it’s the footage of a large crowd of monkeys brawling over a pot of yoghurt in Thailand. As thousands of them raced with frightening speed across the street, it seemed a portent of something larger. Our imaginations fevered by a strange, long and discombobulating March, it was tempting to see the monkeys as sinister symbols of a society descended into chaos and madness.

All this and we’re only halfway there (we still have the US election to come). There’s no one daring to predict the next six months because who could have predicted the first six months?

Instead, there’s a weariness – and a wariness – at this the halfway point of 2020.

The weariness comes from having borne it all – experiencing things (or rather in lockdown, experiencing the lack of things) that we never imagined we’d face.

The wariness is about wondering what’s in store for the next half of 2020. What if the year gets worse?

But emerging on a lot of corners of the internet, there’s a perverse sort of pride about living through this – one half of one of the three worst years EVER.

TikTok has some of the cleverest #2020worstyear content to binge on when you’re having a break from living your worst life. It’s also been a good year for memes.

There’s the feeling that if we get out of 2020 alive, we’ll have a great story to tell the grandchildren.

Jordan Henderson: ‘I changed from wanting to be a player that did everything’ | Jonathan Liew

So Many Hamilton Reaction Tweets Focus On Jonathan Groff’s Spit

Four may have died due to treatment by rogue breast surgeon